Accessibility links
Saudi Critic Vanishes After Visiting Consulate, Prompting Fear And Confusion Saudi Arabia said that Jamal Khashoggi left the premises in Istanbul. But Turkish authorities said the journalist, a vocal commentator on the Gulf kingdom, remained inside the building. 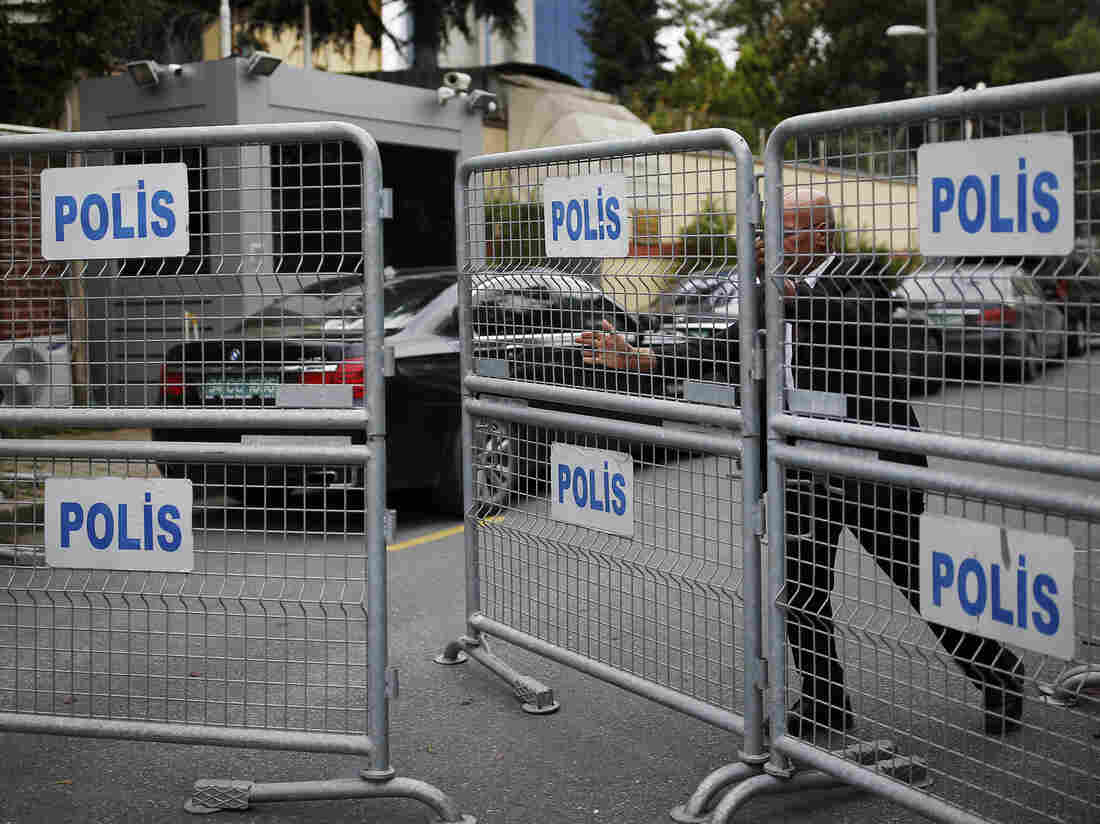 A blocked road in Istanbul leads to the Saudi consulate. Jamal Khashoggi, a prominent critic of Saudi Arabia's crown prince, visited the consulate earlier this week and has not been seen since. Emrah Gurel/AP hide caption 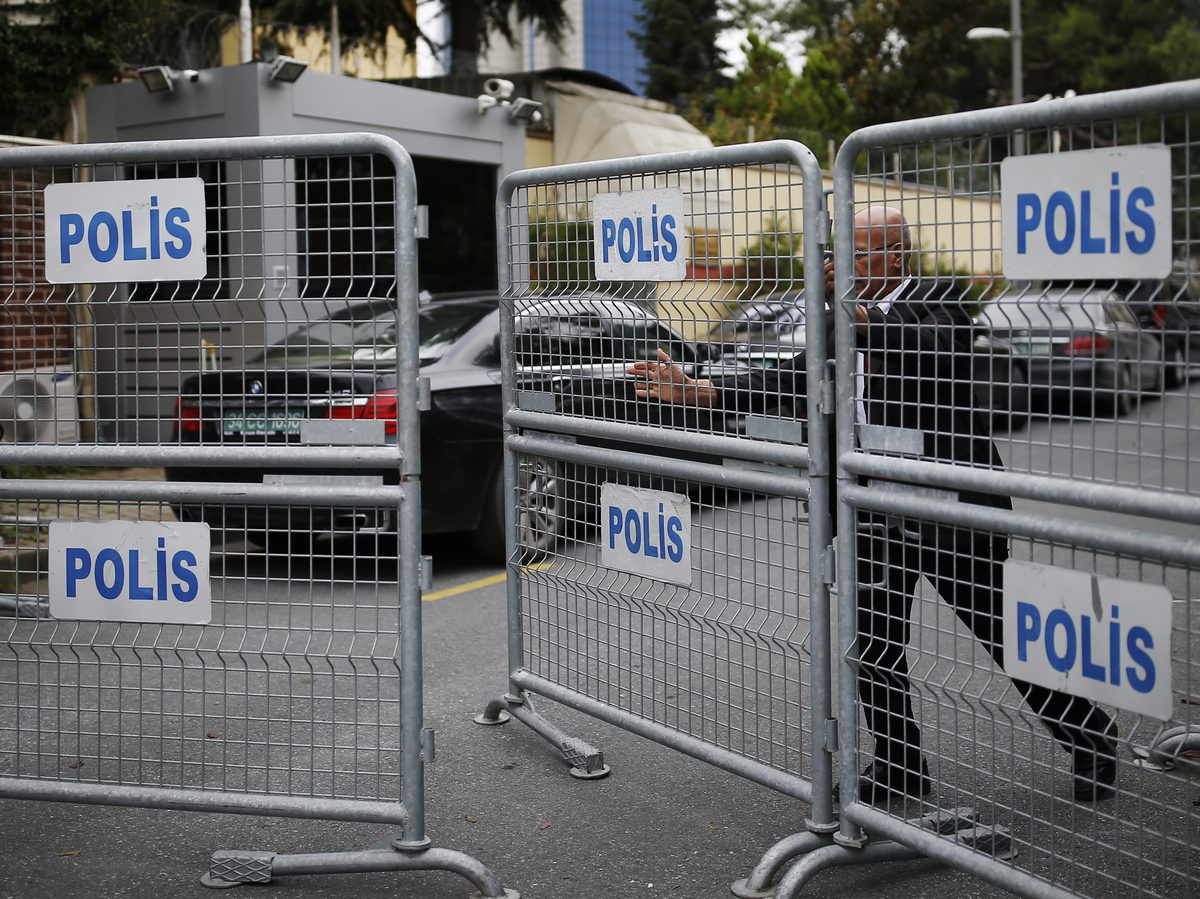 A blocked road in Istanbul leads to the Saudi consulate. Jamal Khashoggi, a prominent critic of Saudi Arabia's crown prince, visited the consulate earlier this week and has not been seen since.

The disappearance of an outspoken Saudi critic, who was last seen walking into a Saudi consulate in Turkey, has left activists, foreign officials and friends fearing for his safety.

Jamal Khashoggi's fiancée told media outlets that she waited hours for Khashoggi to emerge from the consulate in Istanbul. He was there to fill out paperwork so that the two could be married.

"If Saudi authorities surreptitiously detained Khashoggi it would be yet another escalation of Crown Prince Muhammad bin Salman's reign of repression against peaceful dissidents and critics," Sarah Leah Whitson, Middle East director at Human Rights Watch, said in a statement issued Thursday. She added that "the burden of proof is on Saudi Arabia" to prove that the journalist left the consulate in peace.

Human Rights Watch urged Turkish authorities to take steps to prevent Saudi agents from forcibly returning Khashoggi to Saudi Arabia, where the group says an unfair trial may await him.

Turkish presidential spokesman Ibrahim Kalin told reporters on Wednesday that the journalist was still inside the building — directly contradicting the Saudi government, which said he left the premises.

Khashoggi's fiancée refuted Saudi Arabia's claims to Reuters. "If this was true, where is he? Where is he?"

An official with the Saudi Embassy in Washington, D.C., told NPR's Jackie Northam that Khashoggi was neither in the consulate nor in custody.

Last year, in the wake of mounting arrests, Khashoggi left Saudi Arabia for Washington, D.C., and was living in self-imposed exile. In an opinion piece for the Washington Post in September 2017, he wrote, "I have left my home, my family and my job, and I am raising my voice. To do otherwise would betray those who languish in prison. I can speak when so many cannot."

Once a friend to the royal family, Khashoggi became one of its most vocal critics. He denounced the repressive tactics of authorities against dissidents, businessmen, activists and clerics.

A day before entering the consulate, he told a friend that he was worried about being kidnapped and sent back to Saudi Arabia, according to The New York Times. 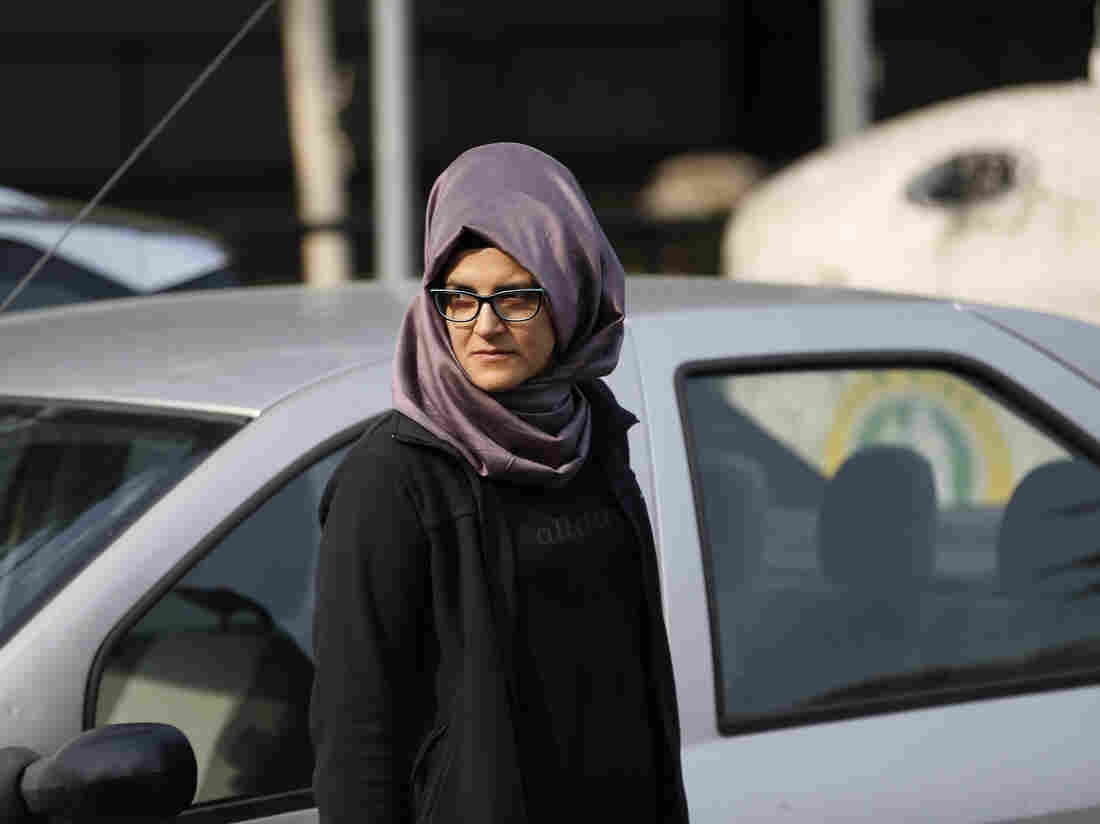 The Turkish fiancee of Khashoggi, who identified herself as Hatice A., stood outside of the Saudi consulate on Wednesday. Lefteris Pitarakis/AP hide caption 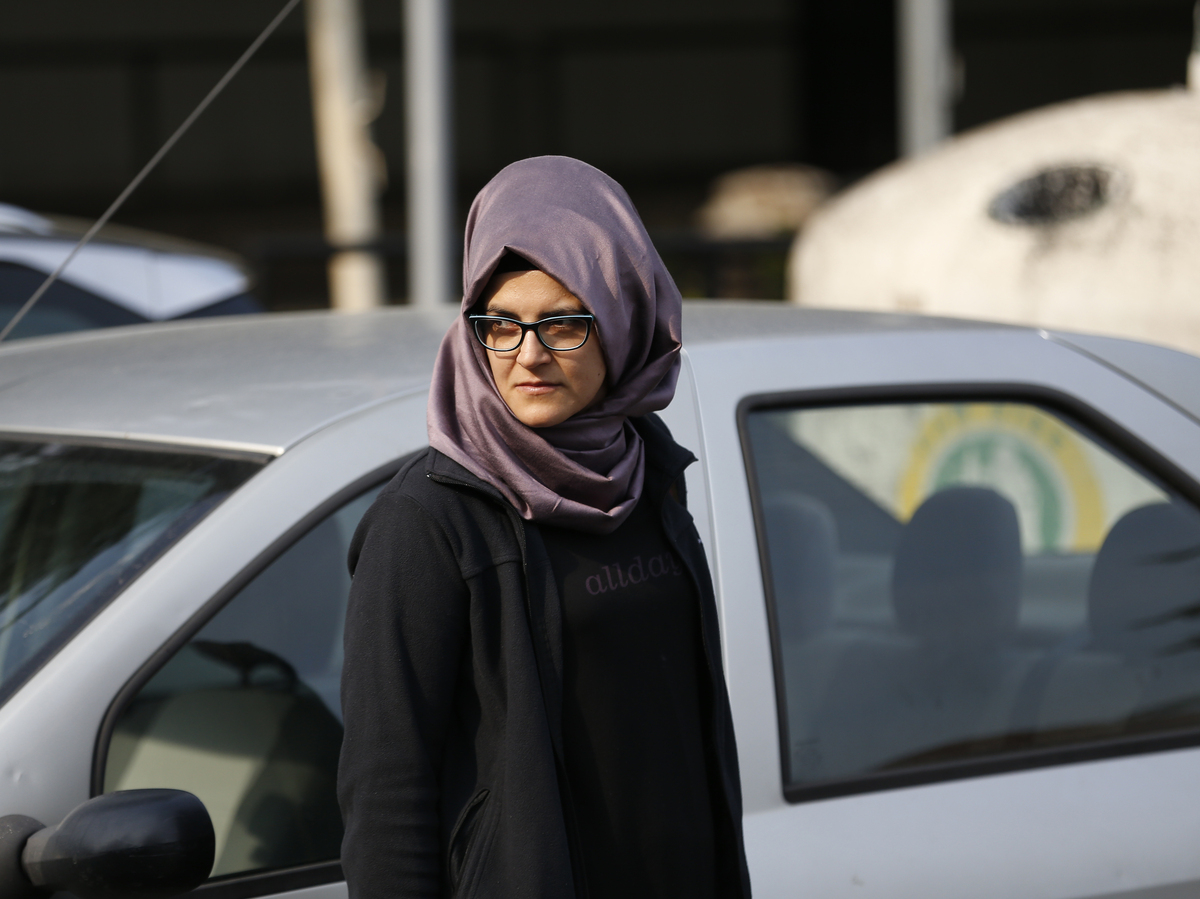 The Turkish fiancee of Khashoggi, who identified herself as Hatice A., stood outside of the Saudi consulate on Wednesday.

The head of the Turk-Arab Media Association, of which Khashoggi is a member, told the Times that Turkish security officers at the consulate checked surveillance camera footage and did not see the journalist walk out. At the same time, diplomatic cars were seen coming and going from the consulate.

The Washington Post reported that the paper has not received word from Khashoggi since he entered the Saudi consulate. Newspaper staff have contacted Saudi and Turkish officials in search of his whereabouts.

His disappearance could exacerbate tense relations between Turkey and Saudi Arabia, which worsened last year after Turkish President Recep Tayyip Erdogan called the Gulf States' isolation of Qatar "inhumane and against Islamic values." In the spring, Saudi Crown Prince Mohammed bin Salman described Turkey as one part of a "triangle of evil" with Iran and Islamic extremists.

Press in both countries face severe restrictions. Turkey was ranked "the world's worst jailer for the second consecutive year," with 73 journalists behind bars in 2017, according to the Committee to Protect Journalists.

Saudi Arabia ranked as one of the world's most censored countries. Under the crown prince's leadership and despite his claims of modernization, female activists, intellectuals and critics have been swept up in arrests.