Accessibility links
Carly Rae Jepsen Is The 21st Century's Queen Of A Million Kingdoms Though "Call Me Maybe" has been a defining moment of her career, it's the aftermath of her 2015 album that's come to define who Jepsen is on social media: the subject of a bottomless well of memes. 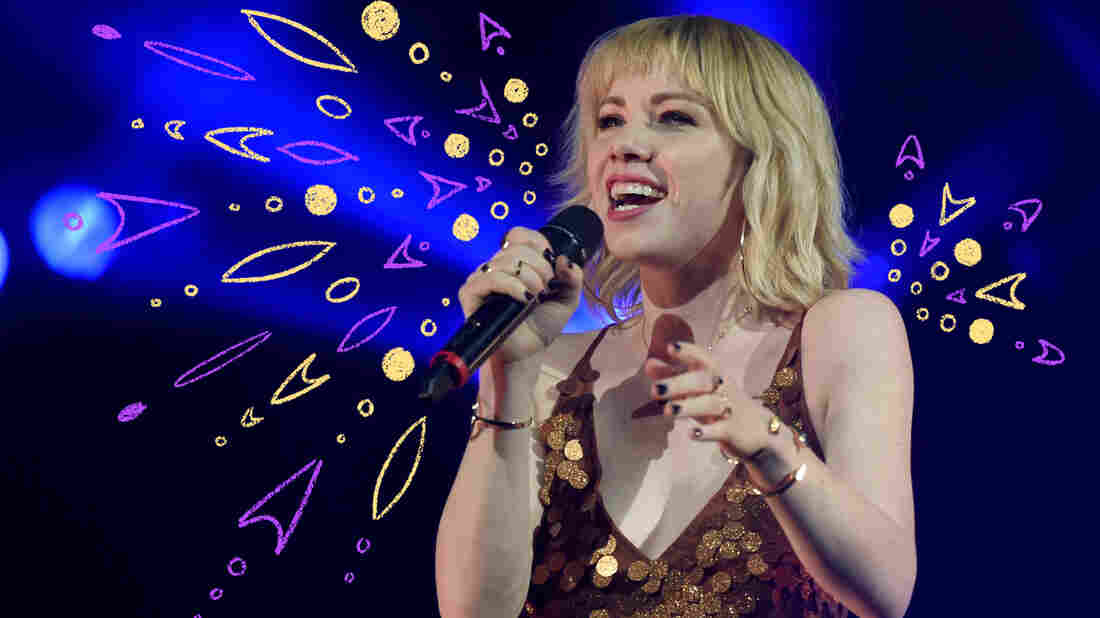 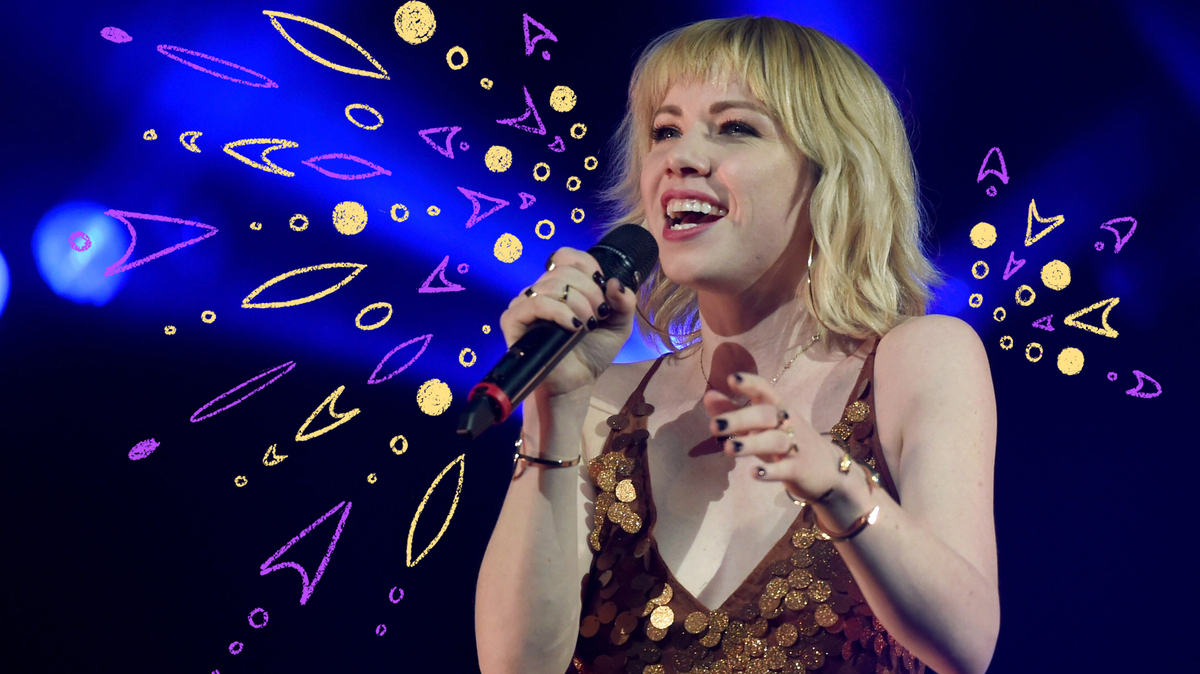 Queen of soft shadows cast upon dark-colored bricks at midday. Queen of releasing carbon dioxide into the atmosphere. Of having an uncle. Of reading. Of emotion. At some point in 2016, Carly Rae Jepsen's Instagram account became flooded with fans coronating the Canadian artist queen of, well, whatever was pictured (and also abstract ideas that couldn't be captured).

As the artist responsible for the pop behemoth "Call Me Maybe," Jepsen still feels, paradoxically, underestimated. Beyond a few tracks, most of her work has remained absent from the airwaves. But you'd never know it from her online reception. There, the memes are abundant: she's better than Mozart, and her 2015 record is album of the year three years running. Online, Carly Rae Jepsen is a weaponized queen and an object of critical fascination.

In the 21st century, virality has become an exceedingly vital form of cultural currency and capital. And while commercial success remains an important indicator, in 2018, one's online reception is equally at stake in sustaining a career in pop music. To have legions of fans defending you and evangelizing your work is necessary in an age of siloed listening. In this way, Carly Rae Jepsen's career is instructive: The Internet's reception of Jepsen's music has given her a longevity and a lifespan beyond its limited, though influential, time on the charts.

It's fitting, then, that the leap of "Call Me Maybe" from minor success to the masses is thanks, at least in part, to a tweet. By the time "Call Me Maybe" was first released as a single in Canada in the fall of 2011, Jepsen was on the second wind of her career, having already competed on Canadian Idol in 2007 and released her debut record, Tug of War, in 2008. But Jepsen wasn't a household name until Justin Bieber tweeted: "Call me maybe by Carly Rae Jepson [sic] is possibly the catchiest song I've ever heard lol," on December 30, 2011. That tweet helped prompt Bieber's manager, Scooter Braun, to sign Jepsen to his label, Schoolboy Records, in February of 2012. Around then, an unofficial video featuring Bieber, Selena Gomez and Ashley Tisdale lip-syncing to the song appeared on YouTube, catapulting Jepsen's sugary chorus into the public consciousness.

With summer approaching, "Call Me Maybe" was covered or mashed up by everyone from former secretaries of state to the U.S. Olympic swim team and even NPR hosts. Enabled by such memes, "Call Me Maybe" began its nine-week run at No. 1 in late June, ultimately securing the unofficial title of Song of the Summer.

Jepsen's sensational success in 2012 reflects a sort of traditional virality, a single that soared on the pop charts, permeating the public consciousness – only amplified by social media's boundless reach. No space was safe from the reverberations of "Call Me Maybe": The track was referenced by Cookie Monster on Sesame Street, took the top spot in the annual Village Voice Pazz and Jop poll and received two Grammy nominations (Song Of The Year and Best Pop Solo Performance). Ubiquitous and inescapable, its oversaturation, from high-brow acclaim to mass culture embrace and everything in between, felt like a true monocultural moment, an extraordinary feat in the 21st century.

With soaring strings and simple lyrics, "Call Me Maybe" was irresistible, but the track didn't make Jepsen a lasting star; in fact, it couldn't even make Kiss, the album that the single was supposed to promote, a commercial success. The album sold 46,000 copies in its first week, debuting at No. 6 on the Billboard 200 record chart. A few tracks got airplay: "Good Time" featuring Owl City of "Fireflies" fame peaked at No. 8, and a remix of "Tonight I'm Getting Over You" with Nicki Minaj barely cracked the Hot 100 before disappearing a week later. But years removed, moments on the record, from the explosive "This Kiss" to the throbbing "Turn Me Up," feel like a precursors to the '80s-inspired pop sound so dominant across the mid-2010s pop landscape.

In the immediate wake of "Call Me Maybe," Jepsen seemed to wrestle with what the track wrought.

"I didn't want to make another 'Call Me Maybe,'" Jepsen told NPR about the era. "I was very grateful for that experience, but I was really excited to kind of just make some new music and show some other colors of what I like to do as a writer."

'It's Fun To Get A Little Deeper': Carly Rae Jepsen Walks The Pop-Star Tightrope

A follow-up didn't come overnight. There was a stint on Broadway as Cinderella; she's said she recorded "an indie album that probably no one will ever hear." Eventually, Jepsen turned her attention toward recording sessions with producers Ariel Rechtshaid, Dev Hynes, Greg Kurstin and Rostam Batmanglij, among others.

And the result was exceptional. 2015's E•MO•TION synthesized pop strands and influenced subsequent artists almost instantly. Again inspired by the '80s and indebted to the left-field pop of Robyn, the record has become a modern touchstone for a new crop of pop-leaning artists and even legacy acts. From the Sia-spoken lines of "Boy Problems" to the ripples of Haim's percussive propulsion on "Making the Most of the Night," the blast radius of E•MO•TION is expansive.

The commercial impact, though, was anything but explosive, moving just over 16,000 copies in its first week. Despite its sales, E•MO•TION has had remarkable staying power among critics, artists and perhaps most importantly, an extremely online cohort of fans, a community whose continued engagement has stoked its lasting virality. Though "Call Me Maybe" has been and will be a defining moment of her career, it's the aftermath of E•MO•TION that's come to define who Carly Rae Jepsen is on social media: the subject of a seemingly bottomless well of memes.

In early 2016, "Run Away With Me" became the soundtrack to a subgenre of Vine videos in which music or speech is replaced with the song's iconic saxophone intro or the explosive chorus.

And of course, there was the "give Carly Rae Jepsen a sword" movement, which gained traction on Tumblr and Twitter and ultimately culminated with someone actually giving Jepsen an inflatable sword during her Lollapalooza performance this summer.

Even now, three years removed from the album's release, new variations appear to arrive almost daily to varying degrees of absurdity: Is Carly Rae Jepsen cooler and more important than Pope Francis? Mozart never once even made it past the audition round of Canadian Idol. Name a more iconic critique of capitalism than "Store."

To be clear, nobody wants Carly Rae Jepsen to slay someone with a sword. She won't be chosen to lead the Catholic Church in the next papal conclave or supplant Mozart in Music History 101. To anyone who isn't already a fan, the memes themselves probably aren't all that funny in the first place. But to those in on the joke, the ludicrous humor is undeniable. Absent commercial success, there's a different definition of pop stardom forged by this Internet humor.

Unlike the universalism of "Call Me Maybe," these tweets and Tumblr entries are defined in part by their distance from the mainstream. They aren't meant to be accessed widely; they exist for the cult-like following that's already acquainted. They don't seek world domination, but rather, they serve to construct an in-group identity and signal a particular fan's understanding. To be in on the humor, memes require a certain intertextual fluency. While that catholic style of consumption doesn't necessarily translate to chart success, it does make Jepsen irresistible in a very Internet way. And it's what, in turn, makes memes in which she's kicking Mozart down a flight of stairs or replacing the National Anthem so widespread among a certain set – and so incomprehensible to others.

This lasting fascination is central to understanding the paradox of Jepsen's popularity. Of course, plenty of other artists have become fodder for fan-made memes. In the eyes of the public, Jepsen's nothing more than an underselling artist post-"Call Me Maybe." Admirers, however, are quick to call Jepsen underrated, a trait that sets her apart – after all, it's not exactly something that fans of Taylor Swift or Beyoncé could rally around online in support of their idols. To fans, E•MO•TION is unjustly ignored by the masses, giving it an underdog quality that makes it a cause worth championing. Online, defenders (some of whom have used the endearing term Jepfriends, Raesins or Jepsies to describe their fandom) proclaim her supremacy and advocate for more than surface-level listening, but with a tongue-in-cheek wink, not the venom or vitriol that has gripped other fandoms.

"Call Me Maybe" may have felt universal, but to her fandom, Carly Rae Jepsen doesn't have to mean the same thing to everyone. In Beyoncé, there's an icon to worship; with Rihanna, there is an undeniable cult of relatability. Unlike the other dominant pop players today, Jepsen's celebrity doesn't even feel central to her songs. There's an enigmatic type of anonymity in her point-of-view: She gives voice to universal sentiments, from defeatist heartbreak to escapist fantasy to all-consuming devotion and desire.

Anyone could give voice to those emotions. But once you've really, really, really, really listened closely, it's almost impossible to imagine anyone but Jepsen delivering those melodramatic lines: "Be tormented by me." "You've got a hold of me the whole damn night." "Here I come to hijack you." Jepsen's not alone in that mode of expression, but in her art, there's a level of abstraction to the first- and second-person lyricism on E•MO•TION that makes for laughable "I felt that" memes. There's a calculated absurdity in claiming closeness to a lyric that could literally apply to anyone. Jepsen's fans get it. And if you don't? They've got worse problems.

Carly Rae Jepsen doesn't have to be queen of the charts, despite the Internet's relentless pleas to buy E•MO•TION on iTunes. Instead, she can have her own world: technicolored-hued, insular but not exclusionary, where absurdity and enthusiasm are equally cherished. Awash in lyrical dramatics and good-natured irreverence, Jepsen's kingdom offers a look at fandom as interpreted by a generation raised on social media. There she reigns, sword in hand.