Accessibility links
Tom Hardy Gets His Teeth Into 'Venom,' Though The Film Lacks Bite Tom Hardy fully commits to this "limp-but-not-enervatingly-awful" anti-(super)hero horror-comedy that doesn't make a lick of sense. 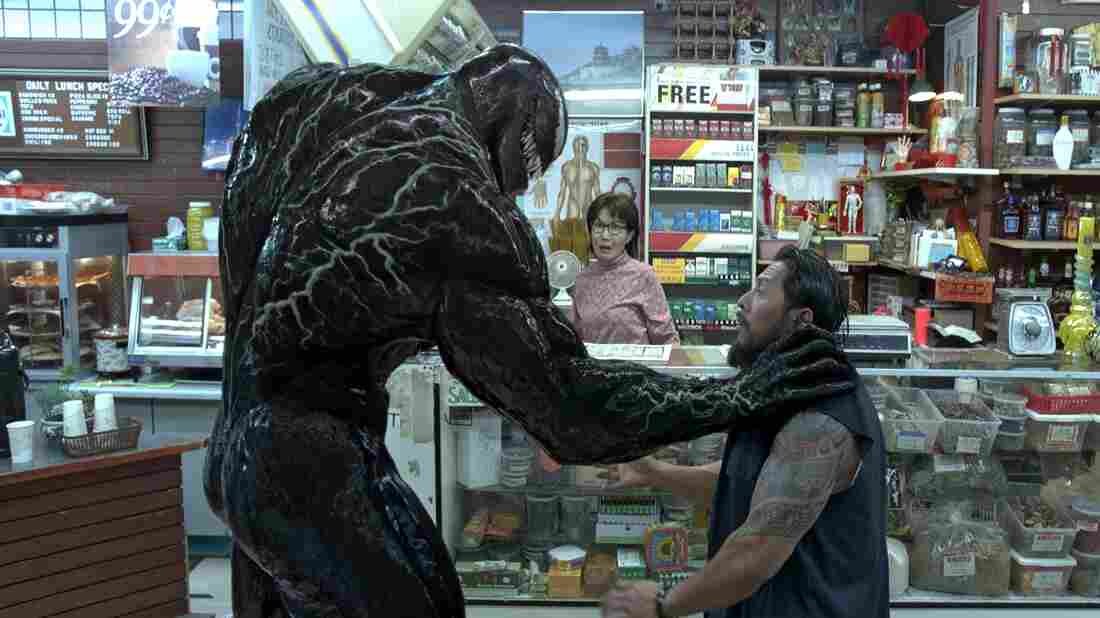 Venom (a CGI-enhanced Tom Hardy) invites a robber (Sam Medina) out for a bite, while the bodega-keeper (Vickie Eng) looks on. Sony Pictures hide caption 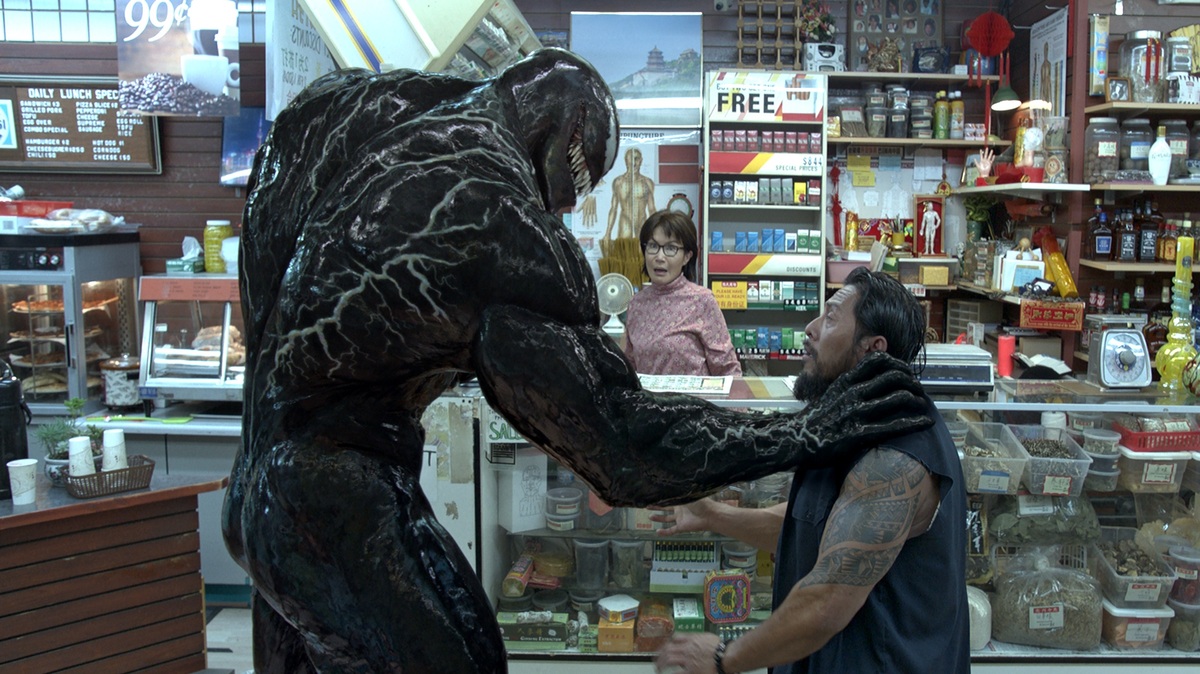 Venom (a CGI-enhanced Tom Hardy) invites a robber (Sam Medina) out for a bite, while the bodega-keeper (Vickie Eng) looks on.

With great power comes great irresponsibility. It's been 29 summers since Prince's "Batdance" heralded the release of Tim Burton's Batman, and longer than that since a comic book screen spin-off featured an original song with lyrics explicitly describing the title character. Even Joss Whedon, a musical-theater guy who made two Avengers movies, and re-wrote and re-shot a hefty chunk of last year's Justice League, failed to supply this very basic, spins-a-web, any-size, catches-thieves-just-like-flies need in his three at-bats.

So thank goodness for Venom, Zombieland director Ruben Fleischer's limp-but-not-enervatingly-awful horror comedy built around a Spider-Man villain last seen in Sam Raimi's now memory-holed Spider-Man 3. Peter Parker — who in the comics of the mid-'80s, many reboots ago, was the ravenous alien symbiote's first human host — doesn't rate so much as a name-check this time, though Venom — the CGI creature, not the movie — still looks like a mylar Spider-Man balloon with filthy razor teeth and Gene Simmons' tongue. Frankly, Venom's disinterest in saying whyso, or in exposition generally, is a selling point at this late-stage moment in the Marvel Cinematic Universe. Q: Say, is this Sony Pictures In Association With Marvel release part of the MCU? A: Shut up!

Anyway, a mere 99 minutes after the movie starts (though star Tom Hardy has claimed his favorite 40 were excised), we're treated over the closing credits to Eminem's ruminations on this beloved Marvel character:

(I got that) adrenaline in 'em (Venom)

Not knowing with 'em

Never gonna slow up in 'em

Ready to step in momentum

Thinking it's time to go get 'em

(When they get bitten with the)

The movie is just prologue to that, pretty much. Hardy plays Eddie Brock, host of The Brock Report, an apparently big-media-backed TV magazine covering local San Francisco news. His muckraking is of the Michael Moore school —basically, he just accuses rich slimeballs of high crimes to their faces on camera. That Eddie's boss has a huge office in the Transamerica Pyramid, but Eddie appears to wallow in filth like some alt-weekly refugee, is one of the film's lesser mysteries. Eddie's fiancee, Anne (Michelle Williams, working at maybe 15 percent capacity), is an attorney who happens to represent Musk-like tech-bro Carlton Drake (Riz Ahmed), whom Eddie is investigating for ...

... performing drug trials on homeless people. In horror-movie code, Eddie's body-snatching by the intelligent tar-colored space-goo that Drake is keeping in his secret lab could be read as karmic payback for hacking Williams' email to aid his investigation — an underhanded move that gets both Eddie and Anne fired.

Perhaps the 25 percent of the movie that Hardy claims was amputated dealt with Eddie's spiral into debt and despondency after Annie dumps him, because in the movie as released she's in a relationship, with nice-guy surgeon Reid Scott what appears to be the very next day. Anyway, Eddie's struggles to find a new gig while oily tentacles are shooting out of his body in response to even minor discomforts are the most diverting section part of the film, if only because Hardy is fully committed in a way no other actor here is. Had this thing been greenlit at the 1990s apex of Venom's popularity as a comic book character, it almost certainly would've starred Jim Carrey. So we all dodged a bullet there.

Anyway: Venom starts talking to Eddie. In an Auto-tuned Cookie Monster voice audible only to him. We always thought that any alien intelligence shrewd enough to try to take our world would be vast, cool, and unsympathetic, but it turns out Venom isn't much different than the alien who starred in NBC's 1980s sitcom ALF: A pushy boor motivated mostly by his next snack. "Let's eat his head!" is a thing that Venom says more than once in Venom. He (?) is also surprisingly sensitive — he bristles at being called a parasite — and pragmatic. "Think of yourself as my ride," he tells Eddie, floating briefly outside of Eddie's body so they can talk eye-to- um, eye, heart-to, er, heart, man to extraterrestrial-of-indeterminate-gender. We all know this is heading towards a boring nocturnal CGI smackdown followed by a tee-up for a sequel, but Venom is at its deeply mediocre best in the scenes where the stakes are lowest.

What else? Jenny Slate, playing a scientist who has a fit of conscience over Drake's abuse of San Franciso's homeless population, contacts Eddie, give him a business card identifying her specialty as Microbial Astral Ecology. Whatever that means, I can tell you this: Eminem said it better.

And I probably ruined your parents' life

And your childhood too

'Cause if I'm the music that y'all grew up on

You marvel that? Eddie Brock is you