Accessibility links
Nobel Peace Prize Goes To Denis Mukwege And Nadia Murad For Fighting Sexual Violence Mukwege, a doctor, and Murad, a survivor of wartime sexual assault, have worked to end the use of sexual violence as a weapon of war and armed conflict. 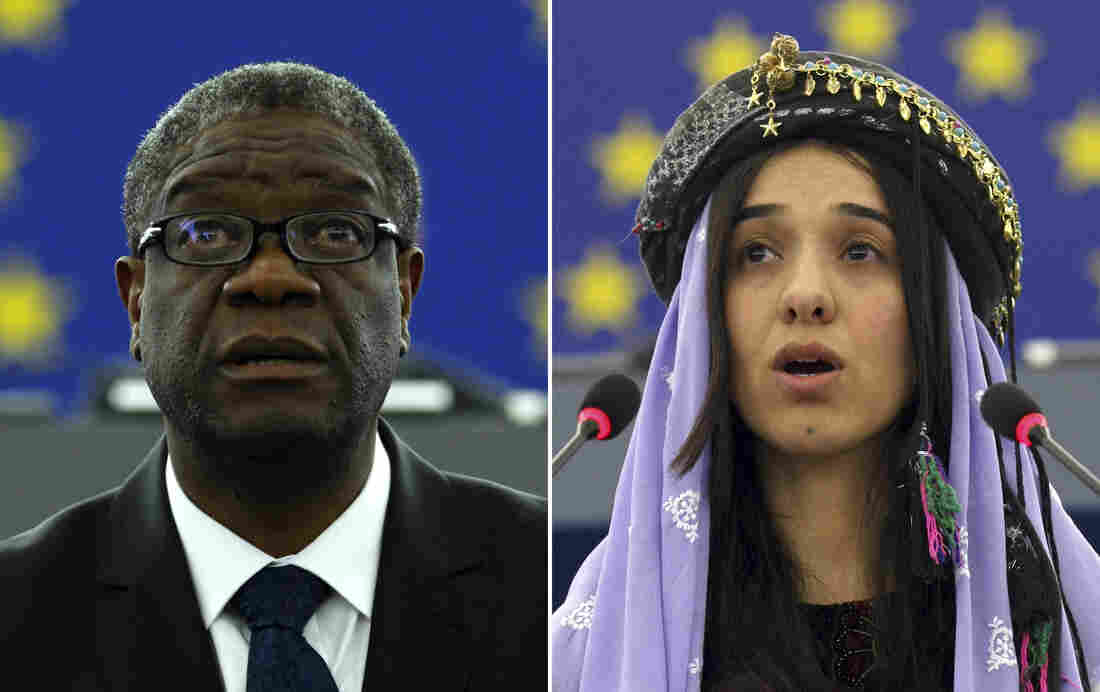 Dr. Denis Mukwege (left), from the Democratic Republic of the Congo, in 2014 and Nadia Murad, a Yazidi woman from Iraq, in 2016 as they both address the European parliament in Strasbourg, France. The pair won the 2018 Nobel Peace Prize for their work to highlight and eliminate the use of sexual violence as a weapon of war. Christian Lutz/AP hide caption 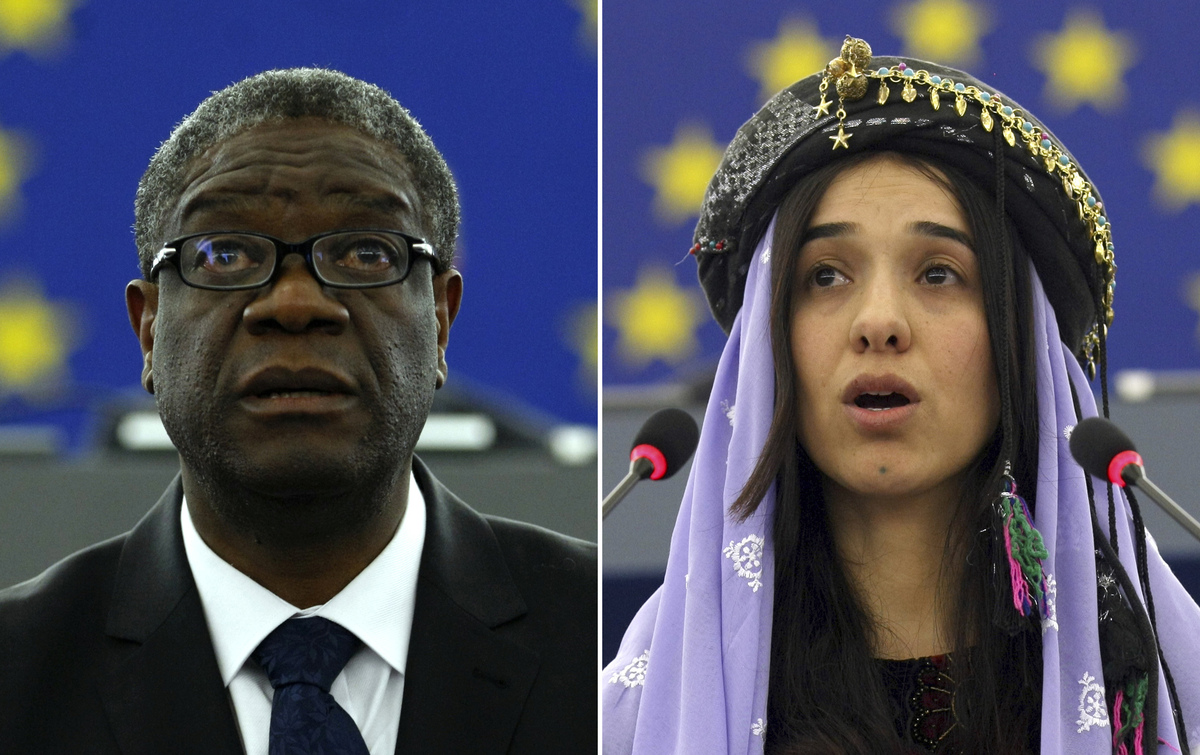 Dr. Denis Mukwege (left), from the Democratic Republic of the Congo, in 2014 and Nadia Murad, a Yazidi woman from Iraq, in 2016 as they both address the European parliament in Strasbourg, France. The pair won the 2018 Nobel Peace Prize for their work to highlight and eliminate the use of sexual violence as a weapon of war.

The 2018 Nobel Peace Prize has been awarded to Dr. Denis Mukwege, a Congolese gynecologist, and Nadia Murad, a Yazidi survivor of rape and captivity by ISIS, for their contributions toward combating wartime sexual assault.

The prize was announced by the Norwegian Nobel Committee in Oslo, Norway, on Friday morning. The committee praised the winners for being symbols in the fight to end the use of sexual violence as a weapon of war and armed conflict.

Mukwege has treated victims of sexual violence in the Democratic Republic of the Congo for most of his adult life. He founded the Panzi Hospital, which supports survivors of sexual assault.

He practices medicine in eastern Congo, which has been called the "rape capital of the world" by U.N. officials. Nearly 50 women are raped there every hour, experts say. Mukwege has treated tens of thousands of women for rape since opening Panzi Hospital in the eastern Congo in 1999.

The hospital's original mission was to curb maternal mortality rates. "But our first patient did not come to deliver a baby," he said in a 2016 speech. "She had been raped with extreme violence."

Mukwege has received multiple threats for carrying out his work. As NPR reported in a 2016 profile of the doctor:

"In September 2012 he gave a speech decrying the horror of mass rape in Congo to the U.N. A month later, gunmen invaded his home and attempted to kill him, his wife and their two daughters. His guard intervened. During the ensuing shootout, the doctor and his family played dead. He left Congo shortly thereafter but the women of Eastern Congo sold their harvest to pay for his plane ticket home."

"His basic principle is that justice is everyone's business," the committee said.

Murad herself is a victim of sexual war crimes.

She is a member of the Yazidi minority in northern Iraq and was taken captive by ISIS members who had launched an attack on her small village. She was held as a sex slave for three months before escaping from her captors. In 2016, she was named the U.N.'s first Goodwill Ambassador for the Dignity of Survivors of Human Trafficking.

It is believed that some 3,000 Yazidi women and girls remain enslaved.

Murad, who is in her mid-20s, has spoken extensively about her experience, despite the immense shame her culture associates with rape — many Yazidi survivors refuse to be named. As NPR has reported, health authorities administer so-called virginity tests to some Yazidi women who return from captivity. Officials say they're voluntary and are done at the request of a victim or by the court, but some health groups call them traumatic and medically useless.

"She refused to accept the social codes that require women to remain silent and ashamed of the abuses to which they have been subjected," the committee said.

This year, the committee wanted to send "a message of awareness that women who constitute half the population in most communities actually are used as a weapon of war," said Berit Reiss-Andersen, chair of the Norwegian Nobel Committee, during a news conference.

Reiss-Andersen said that while wartime sexual assault and the #MeToo movement in general are significantly different, their goals share key elements: They both aim to acknowledge the abuses of women, eliminate the victim shaming and support women who speak out about their sexual assaults.

There were 331 candidates for the 2018 Nobel Peace Prize, the second-highest number of candidates ever. The peace prize is the only Nobel Prize awarded by the Norwegian Nobel Committee.

Last year's prize was awarded to the International Campaign to Abolish Nuclear Weapons, or ICAN, a global organization seeking to "outlaw and eliminate all nuclear weapons" under international law.

The committee praised ICAN for drawing attention to "the catastrophic humanitarian consequences of any use of nuclear weapons." The world's nuclear powers have not committed to their treaty.

This year's Nobel Prizes in medicine, physics and chemistry were announced by the Royal Swedish Academy of Sciences earlier this week. The Nobel Memorial Prize in Economic Sciences will be awarded on Monday.