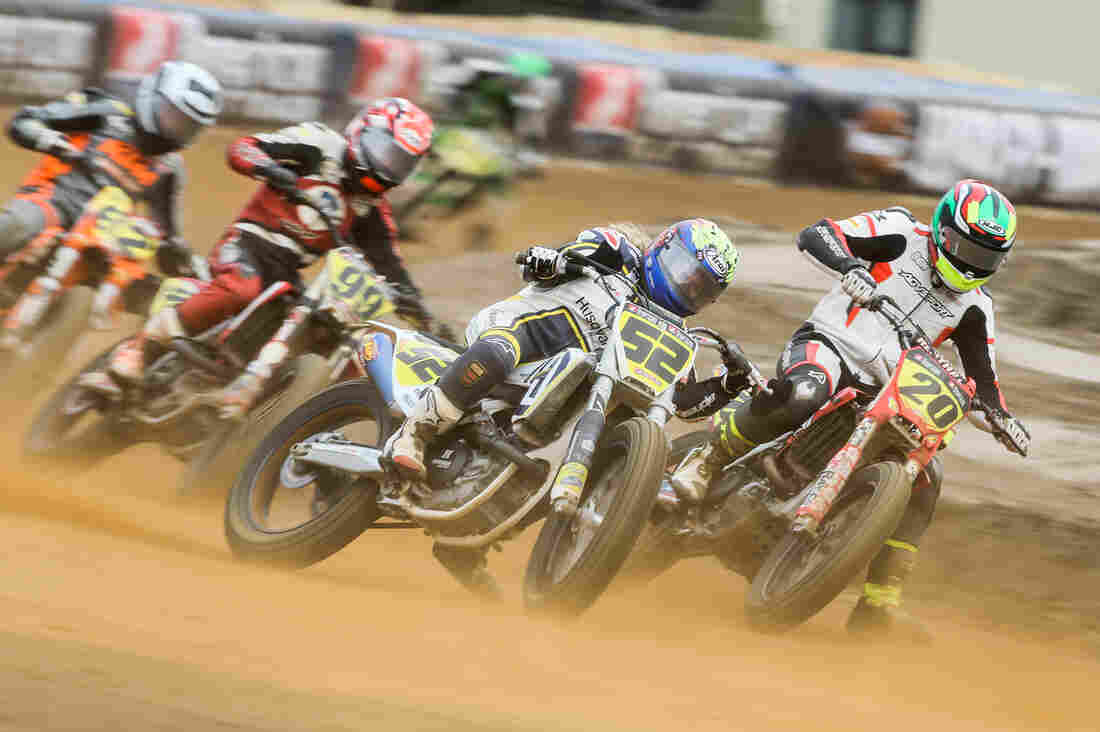 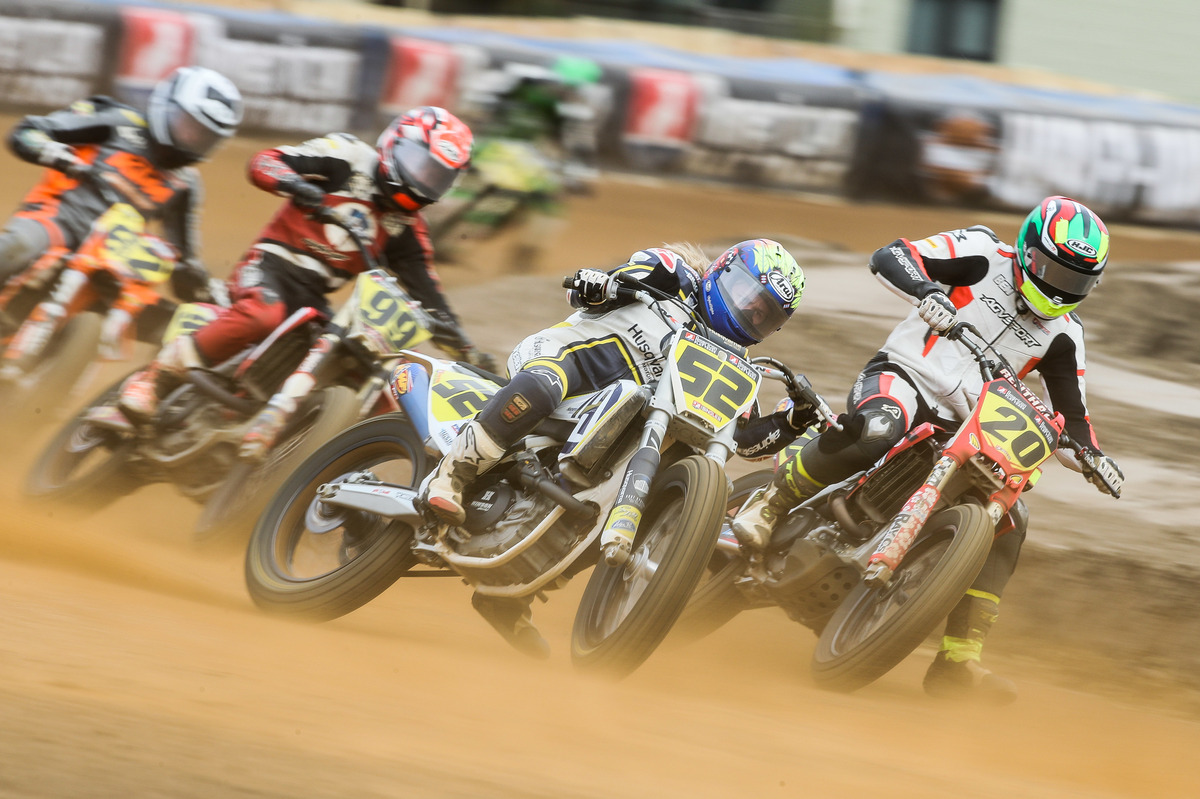 Flat track is the oldest form of motorcycle racing in the U.S., on dirt tracks, stretching back to the early 1900s. The sport, rooted in the country's heartland, is now showing signs of broader appeal, even in America's crowded sports landscape.

The sport's resurgence is due in large part to two unlikely characters.

"Come to a flat track," Lock said, "where you can be within 10 feet of people whizzing [by] on dirt, at 130 miles per hour, with six abreast. If that doesn't make you stop and hold your breath for a second, I'm not going to be able to reach you at all."

@AmericanFlatTrk is fast. Really fast. Hear more abt motorcycles on the dirt and AFT’s big star this week on @NPR pic.twitter.com/EdoqZTrjjY

For the past three years, it's been Lock's mission to spread the word: the sport, born on dirt tracks in rural America, is worth your attention and your money. Before he took over, Lock says the business of flat track had gone awry.

"For many, many years there was no business," he says, adding "This sport survived through the generosity of successful business people who'd sponsor a rider or a team. But it was on life support as a professional sport."

"What I found was this true grit," Lock says. "It's a blue collar, all-American sport. And I felt the time was right. That flat track racing could be both heritage and contemporary."

Contemporary came in the form of a television deal with NBC SN in 2016. Also an increased social media presence. The network's flat track broadcasts, shown now on a one-week delay, led to a dramatic rise in total viewership – more than 3 million people this year watched flat track racing through a combination of TV online streaming and live events. 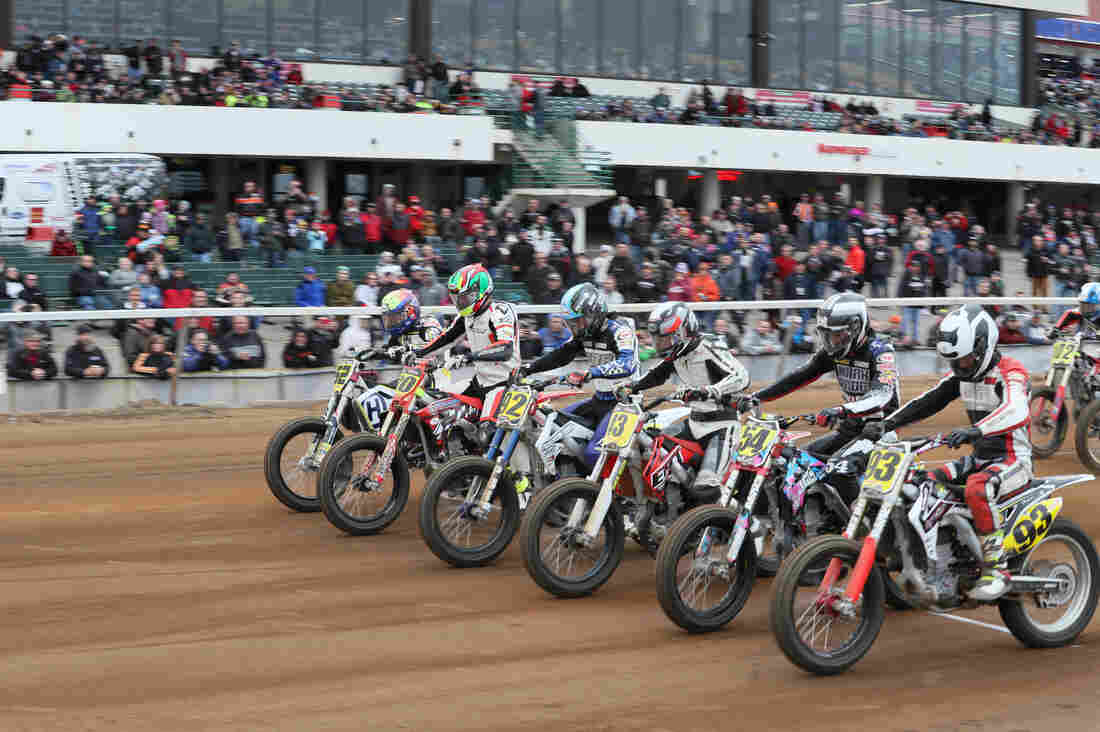 As even Shayna Texter (52, farthest from camera) will admit, starts are not her forte. With less weight on the rear wheel of her FC 450 Husqvarna, traction is limited and her rear tire tends to spin, often relegating her to a mid-pack position in the race's early laps. American Flat Track / Brian J. Nelson hide caption 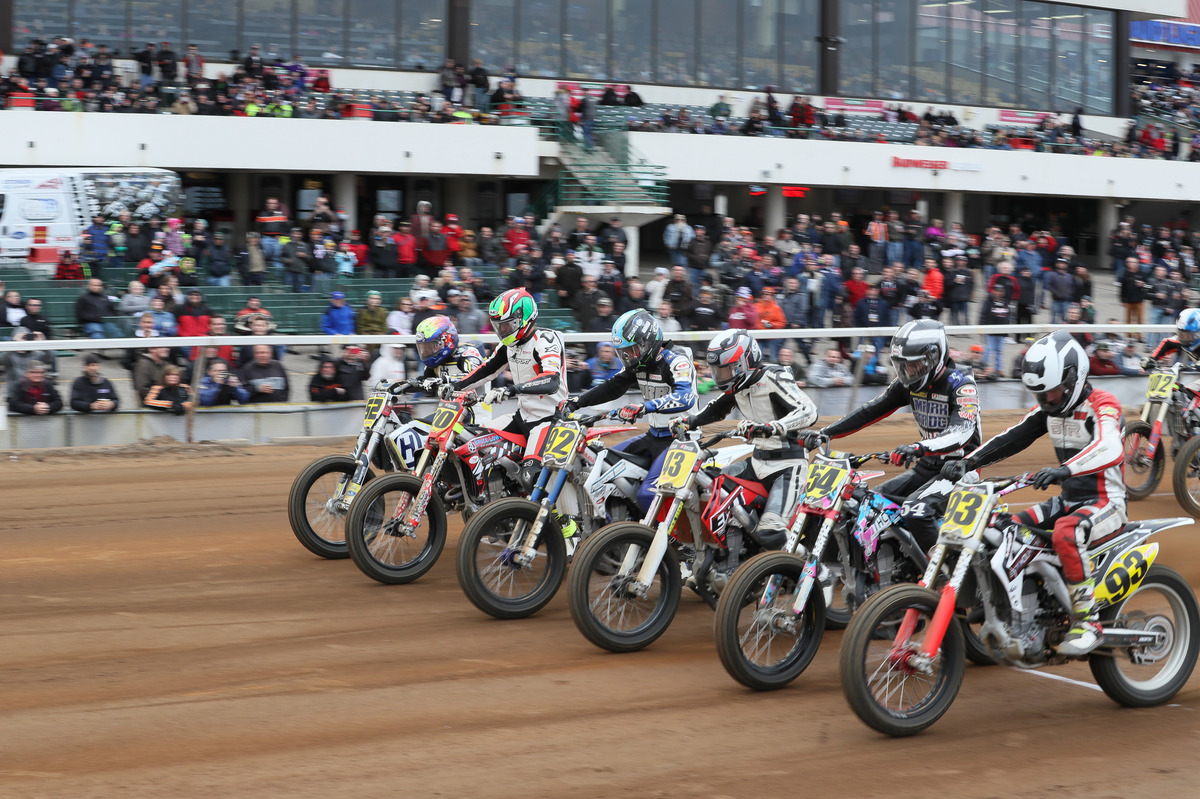 As even Shayna Texter (52, farthest from camera) will admit, starts are not her forte. With less weight on the rear wheel of her FC 450 Husqvarna, traction is limited and her rear tire tends to spin, often relegating her to a mid-pack position in the race's early laps.

Lock says American Flat Track also is reaping the rewards of the advice he took from Dana White, president of the mixed martial arts organization UFC. White turned the fringe sport of MMA into a global moneymaker. Lock says he invited White to a flat track race a couple of years ago.

"He [White] said to me this is all very familiar," Lock says. "What you've got here is raw, it's real, it's unpolished. And in a world of over-produced sporting action, you've got an edge here. He said but don't make a mistake. He said the one thing you need to learn is introduce your sport to America through its athletes. Not through the format, not through how many ccs the engine's got or who won the championship in 1921. He said introduce it through the eyes of your athletes."

Autograph time at flat track events has become almost as important as race time. The meet and greet at Canterbury Park lasted about an hour, and as usual, the biggest line was for one of flat track's biggest stars.

Although "big" is a relative term.

At five feet tall and a little over 100 pounds, 27-year-old Shayna Texter has been one of the most popular and successful racers at least since 2011.

That was a breakthrough year. Texter won a race in Knoxville, Iowa — a singles main event. "Singles" race on single-cylinder motorcycles. It was the first time in flat track history that a woman won a professional race.

Since then, her celebrity, as "the girl who beats the boys," and her accomplishments, have grown. Texter won five races last year, two this season along with three second-place finishes.

Despite her success, Texter acknowledges this wasn't the sporting life she envisioned as a kid growing up in Pennsylvania. 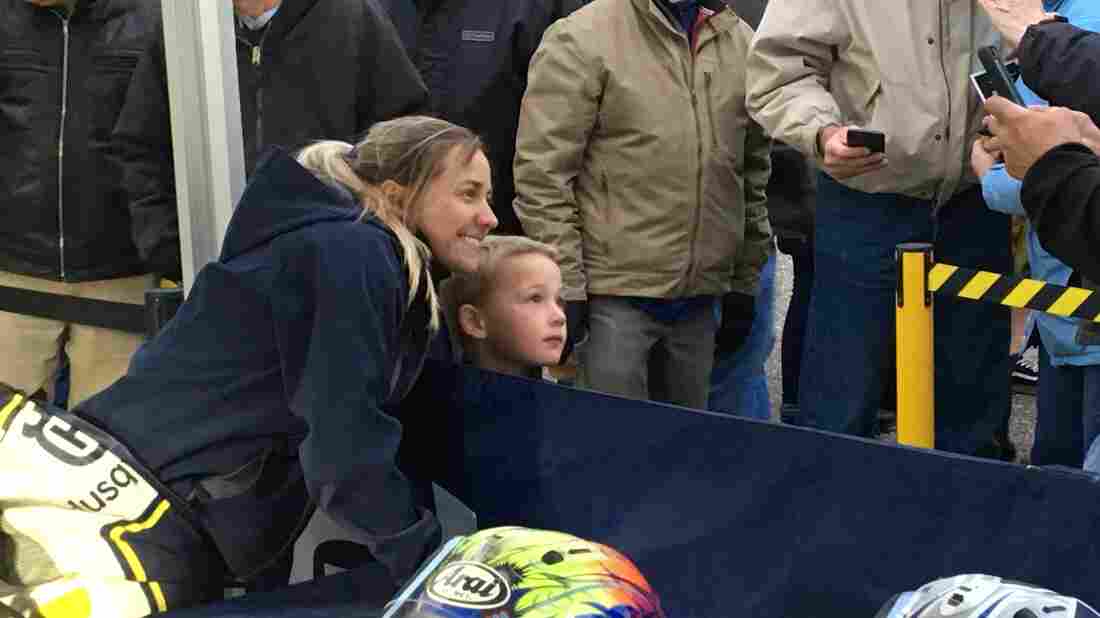 American Flat Track motorcycle racer Shayna Texter poses with a young fan during an autograph session at Canterbury Park outside Minneapolis. Texter is one of the most popular racers on the AFT circuit and, in 2011, became the first woman in the history of flat track racing to win a professional singles main event. Tom Goldman/NPR hide caption 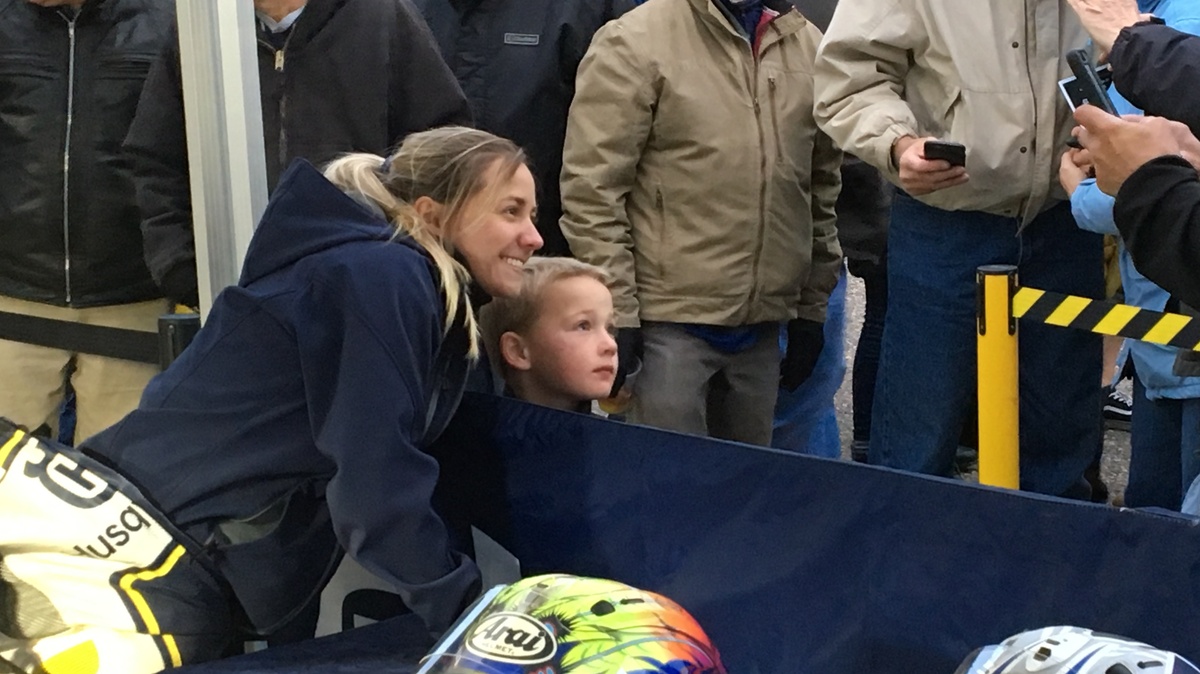 American Flat Track motorcycle racer Shayna Texter poses with a young fan during an autograph session at Canterbury Park outside Minneapolis. Texter is one of the most popular racers on the AFT circuit and, in 2011, became the first woman in the history of flat track racing to win a professional singles main event.

"I enjoyed riding, but I was actually pretty intimidated by it," says Texter. "It wasn't really my thing. My thing was playing soccer. I wanted to be the next Mia Hamm and go to college and play soccer my entire life."

Injuries from motorcycle racing limited her soccer and finally led her away from the game and to the dirt tracks full time.

She decided to give full-time racing a shot when she was 12, after her brother got into it. "Being that my family owned a Harley [Davidson] shop, it wasn't that hard to get the [racing] bike ready. We went racing at a local track in Hanover, and I haven't stopped since."

Although it was a bit of a circuitous route, Texter realizes racing was an inevitable part of her life. There was the family-owned Harley shop, her dad was a pro-flat tracker, and her grandfather, Glenn Fitzcharles is in the sprint car hall-of-fame.

Texter goes "left on dirt" — a reference to the left turns flat trackers make after rocketing down straightaways — as well as anyone. Her small size helps on the longer tracks because she can tuck down on the bike with little wind resistance.

Ironically, Texter has become a Mia Hamm-like figure, paving the way for a next generation of female racers. Proof appeared in that autograph line, as two tiny girls, Ellie and Charlie, came face to face with their hero.

"I race a Honda," says Charlie, who nods at Ellie, "she races a Yamaha." "Sweet!" Texter says, adding, "one day I'll be getting your girls' autographs."

Texter isn't just a hit with young girls either. Her manager, Scott Taylor, recounts the scene this year in Sturgis, S.D. — a motorcycle hotbed.

"It was amazing to see these tough, hardcore biker guys," Taylor says. "Tattooed guys that rode in and stood in line wanting her autograph. Getting their picture with her. I don't see them doing it with anyone else here."

Being a gender pioneer of sorts usually comes with stories of hardship "back in the day." Texter doesn't have those stories.

"For me I've always been good," she says. "I won coming up through as an amateur. I won local championships. I've raced with a lot of these guys at amateur nationals throughout my career. So far as being respected, or harassed for being a woman, it hasn't been an issue for me."

"Our sport is one of the less political sports that you'll find in the country," Texter says.

It's certainly one of the more dangerous, as is the case in any high speed motor sport. In August, a flat tracker died from injuries after an on track accident. Texter crashed hard this season during a race. She flew over her bike's handle bars. Taylor says he could tell she was hurt, but she wasn't going to show it. "I think that's part of being a woman [in a male-dominated sport]," Taylor says. "She doesn't want to be treated differently. She's a racer. It was a very hard crash but she was not going to miss racing."

So Texter hopped on a back-up motorcycle and kept riding.

American Flat Track hopes she does that for a long time.