Accessibility links
After One Year Of Headlines, #MeToo Is Everywhere Twelve months after the reporting that brought down Harvey Weinstein, the movement to address sexual harassment has permeated the national political and cultural conversation. 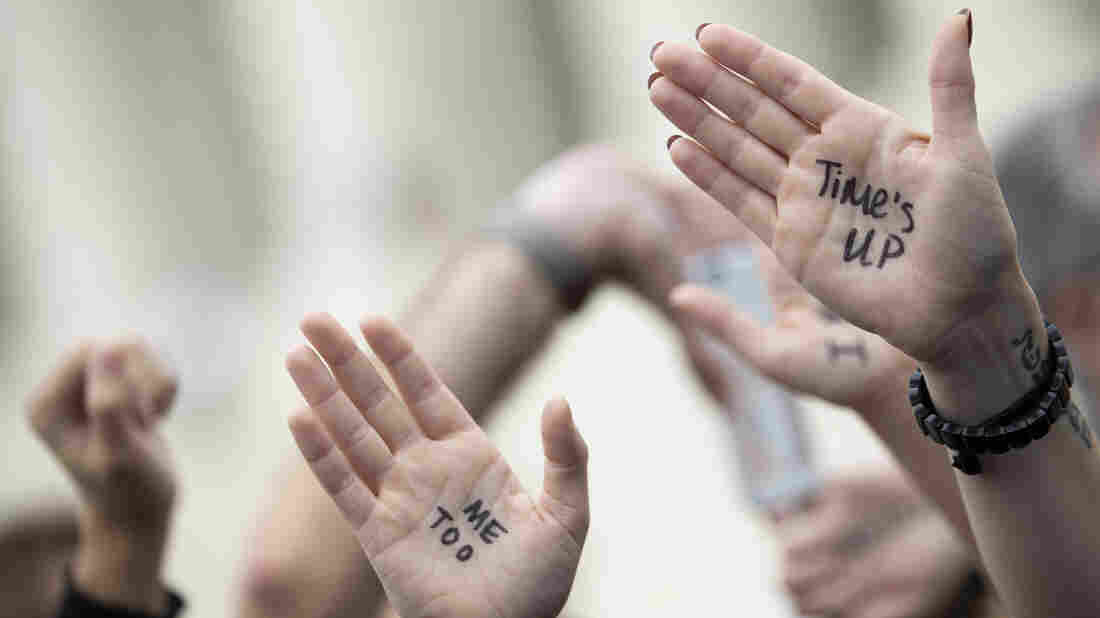 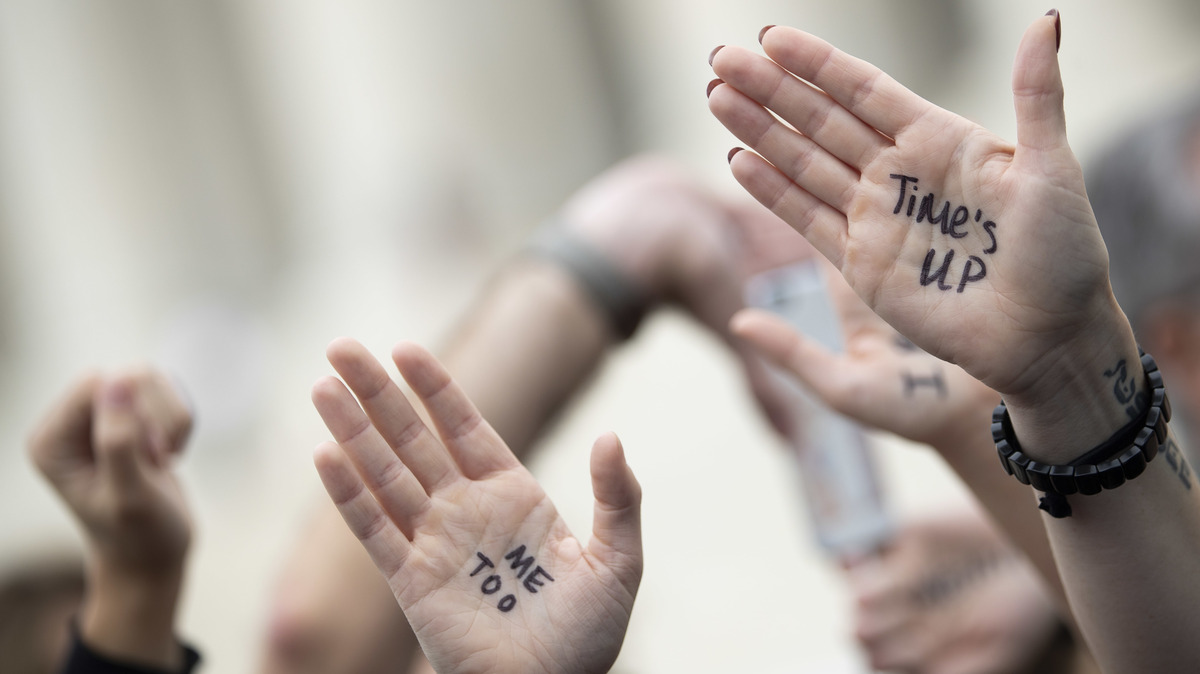 Throughout the Senate confirmation period, protesters have rallied against Supreme Court nominee Brett Kavanaugh on Capitol Hill in Washington, D.C. Christine Blasey Ford and others have alleged that Kavanaugh sexually assaulted them decades ago.

This week marks the one-year anniversary of the reporting, in The New York Times and The New Yorker, that led to the fall of movie producer Harvey Weinstein.

From that point on, the hashtag #MeToo was catapulted into a national movement. The #MeToo conversation now seems to be everywhere.

Oprah Winfrey at the Golden Globe Awards: "Take us to the time when nobody ever has to say 'me too' again."

Janelle Monae at the Grammy Awards: "We come in peace, but we mean business."

The Psychological Forces Behind A Cultural Reckoning: Understanding #MeToo

At Dunbar High School in Washington, D.C., psychology teacher Sarah Soileau wants her class to consider some of the questions raised by the #MeToo movement — questions like verbal consent.

"That is a good rule to live by," Soileau says. "Each base you better ask, all right?"

Sarah Soileau says #MeToo has been an opportunity to talk about serious and relevant issues like consent and sexual harassment.

"It's important to teach our students when they're younger so they don't grow up in a culture where they think it's OK," she says. "I'm just trying to give these girls and boys the voice to say, 'This is not OK, and I'm not going to tolerate it.' " 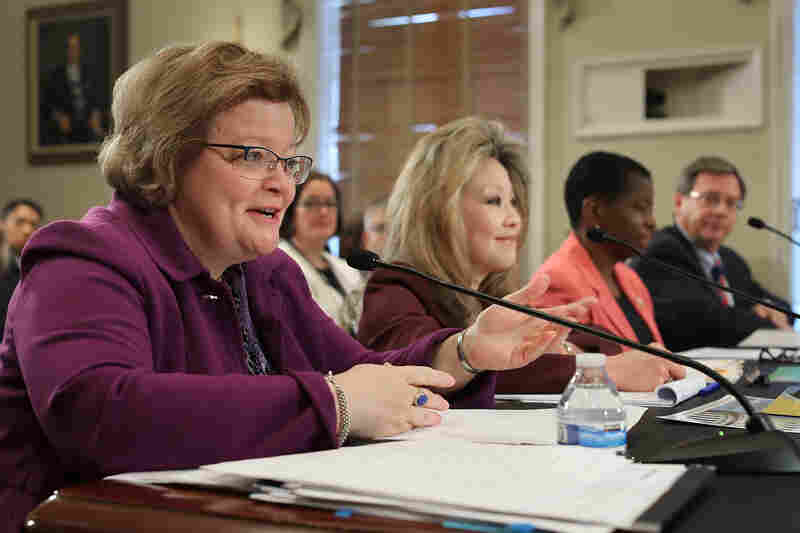 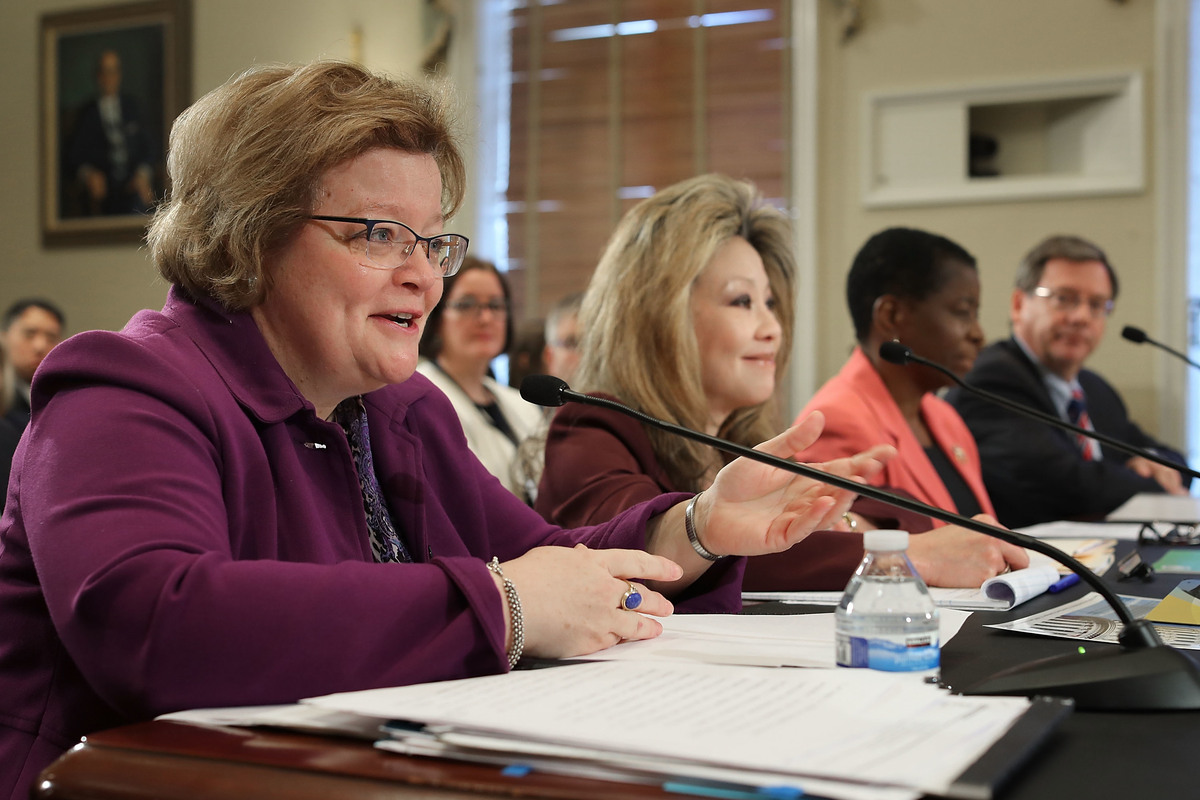 Victoria Lipnic (left), acting chair of the Equal Employment Opportunity Commission, testifies before the House Administration Committee during a hearing on preventing sexual harassment in Congress in December 2017.

Women in general aren't tolerating it either, and the results are measurable. This year, sexual harassment reports to the Equal Employment Opportunity Commission have gone up 12 percent, after years of remaining steady. The EEOC is the government agency that handles workplace discrimination cases including sexual harassment.

The vast majority of those claims do not go to litigation. But the number that did doubled this year.

EEOC Acting Chair Victoria Lipnic says the interest generated by #MeToo — from both individuals and employers — has been enormous.

"We've had a fivefold increase of hits to our website of people looking for information about sexual harassment," Lipnic says. "We've done hundreds of training sessions for employers."

Here's something else that has changed as a result of #MeToo: There's real money available for women to get help.

"I have been a civil rights lawyer and a women's rights lawyer for the last 20 years," says Sharyn Tejani, director of the Time's Up Legal Defense Fund. "And if you had told me at any point in those 20 years that there would be money available to help people come forward, to help people with their cases, I would have told you, 'That's just never going to happen.' "

Here's How The Time's Up Legal Defense Fund Actually Works

At the same time, there's only so much lawyers can do. Of the thousands of sexual harassment reports that come in, only a fraction get funded for legal help.

"Some of those women who are coming forward are independent contractors, and unless you live in certain states, you're not covered by discrimination law. Some of those women work for very small employers — in some states, those are not covered. And so it's a matter of people coming forward, and we can we connect them to lawyers and the lawyers help them when they can. But sometimes there isn't something that can be done."

Jo Freeman has written books on women's liberation and other social movements. To put #MeToo in context, she points to the fight against racism.

"A hundred years ago, the culture condoned white supremacy," Freeman says. "We've been fighting that one for a hundred years, and I think we've made a lot of progress, but it ain't done yet."

"You gotta plow the ground and plant the seeds before you can reap the harvest," she adds.

Freeman says social movements need both the high profile "surges" like speeches and marches. But they also need the behind-the-scenes work like the Time's Up Legal Defense Fund.

"That underneath-the-radar, behind-the-scenes organizing is extremely important," Freeman says. "Well you know, what you see are the surge parts. What's catching our attention now is the vast turnout of people in the Kavanaugh thing."

Freeman is referring to Christine Blasey Ford's allegations that Brett Kavanaugh sexually assaulted her decades ago, when they were in high school. Hundreds of people protested Kavanaugh's nomination to the U.S. Supreme Court this week.

One of the protesters, Laura Miranda-Browne, came down from New Jersey. She says her feelings have been all over the place these past few weeks: "appalled and demoralized," yet "hopeful and motivated."

Miranda-Browne believes that without the support of the #MeToo movement, Ford might not have come forward at all.

"I really think that without the cultural conversation that's taking place at this moment, she wouldn't have had the courage to come forward — and knowing she would have the support of millions of Americans," Miranda-Browne says.

Many critics find that the #MeToo movement has resulted in outsized punishments for small offenses like inappropriate flirting. This week President Trump said that "it's a very scary time for young men in America."

If you had told me at any point in [the last] 20 years that there would be money available to help people come forward, to help people with their cases, I would have told you, 'That's just never going to happen.'

"My whole life I've heard you're innocent until proven guilty," Trump said to reporters outside the White House. "But now you're guilty until proven innocent. That is a very, very difficult standard."

The #MeToo backlash isn't just about the fear of false accusations. Heather Mac Donald, a Manhattan Institute Fellow and author of the book The Diversity Delusion: How Race and Gender Pandering Corrupt the University and Undermine Our Culture, says the movement assumes women in America have no voice.

"We live in a very tolerant society," Mac Donald says. "This is not Afghanistan. This is not Iran with the Revolutionary Guard. For American females to complain that they're in a rape culture or a patriarchy, to me is — is extremely deluded and and ignorant about what those things really look like."

Whatever your point of view, there's no denying the #MeToo movement has ignited a feisty cultural conversation. It has disrupted ideas about what women should put up with at work, and divided people along gender and generational lines.

Jenny Lumet is a screenwriter and TV producer. In an open letter in The Hollywood Reporter, she alleged that hip-hop mogul Russell Simmons sexually attacked her. He has denied it.

Lumet has thought a lot about what #MeToo means — how it forces people to face their own beliefs and behavior.

"What is the most uncomfortable for people is ... you have to turn your gaze upon yourself," Lumet says. "Or you're forced to sometimes, in moments, and even if it's just for a second."

Lumet believes this year of the #MeToo movement will forever be a reference point.

The introduction to the audio version of this story mistakenly states that the #MeToo movement started a year ago. In fact, it was started in 2006, by activist Tarana Burke. It took off after allegations of sexual misconduct against movie producer Harvey Weinstein were reported in The New York Times and The New Yorker in October 2017.