Accessibility links
When Asked About Pith Helmet, FLOTUS Responds: 'Focus On What I Do, Not What I Wear' During Melania Trump's first solo foreign trip, to Ghana, Malawi, Kenya and Egypt, critics called her out on the colonial undertones expressed through her attire.

When Asked About Pith Helmet, FLOTUS Responds: 'Focus On What I Do, Not What I Wear'

When Asked About Pith Helmet, FLOTUS Responds: 'Focus On What I Do, Not What I Wear' 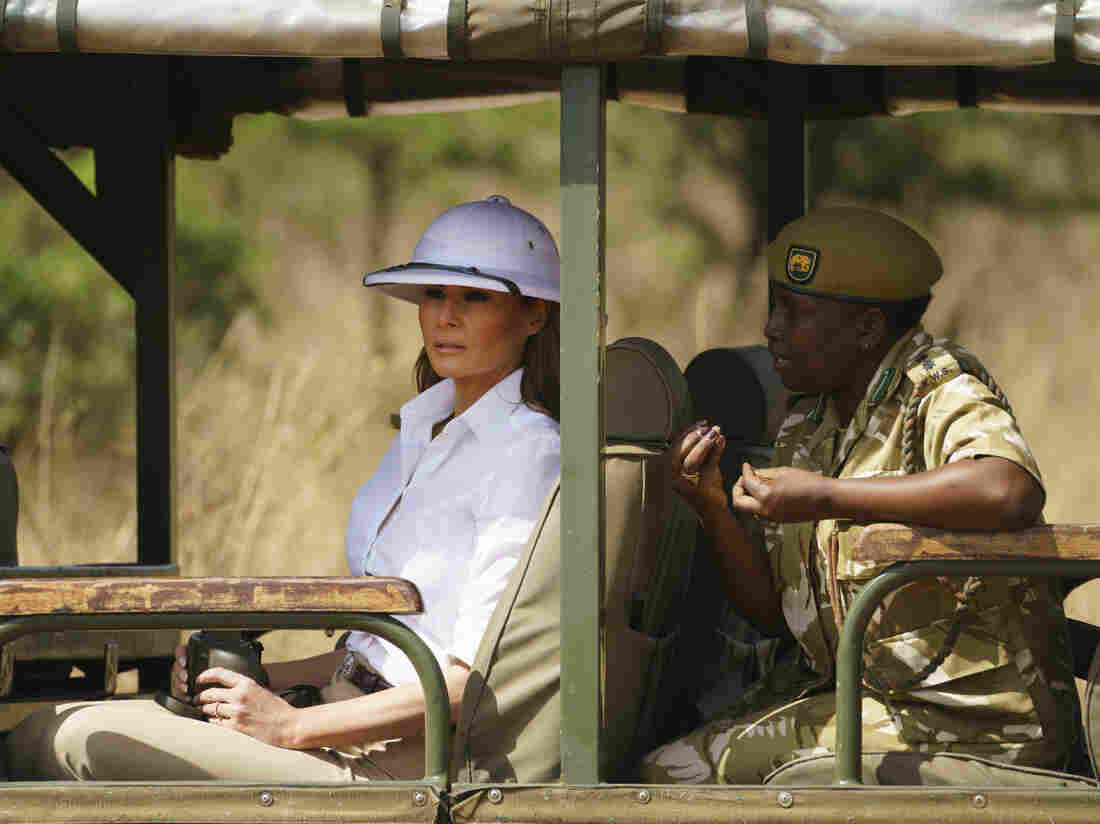 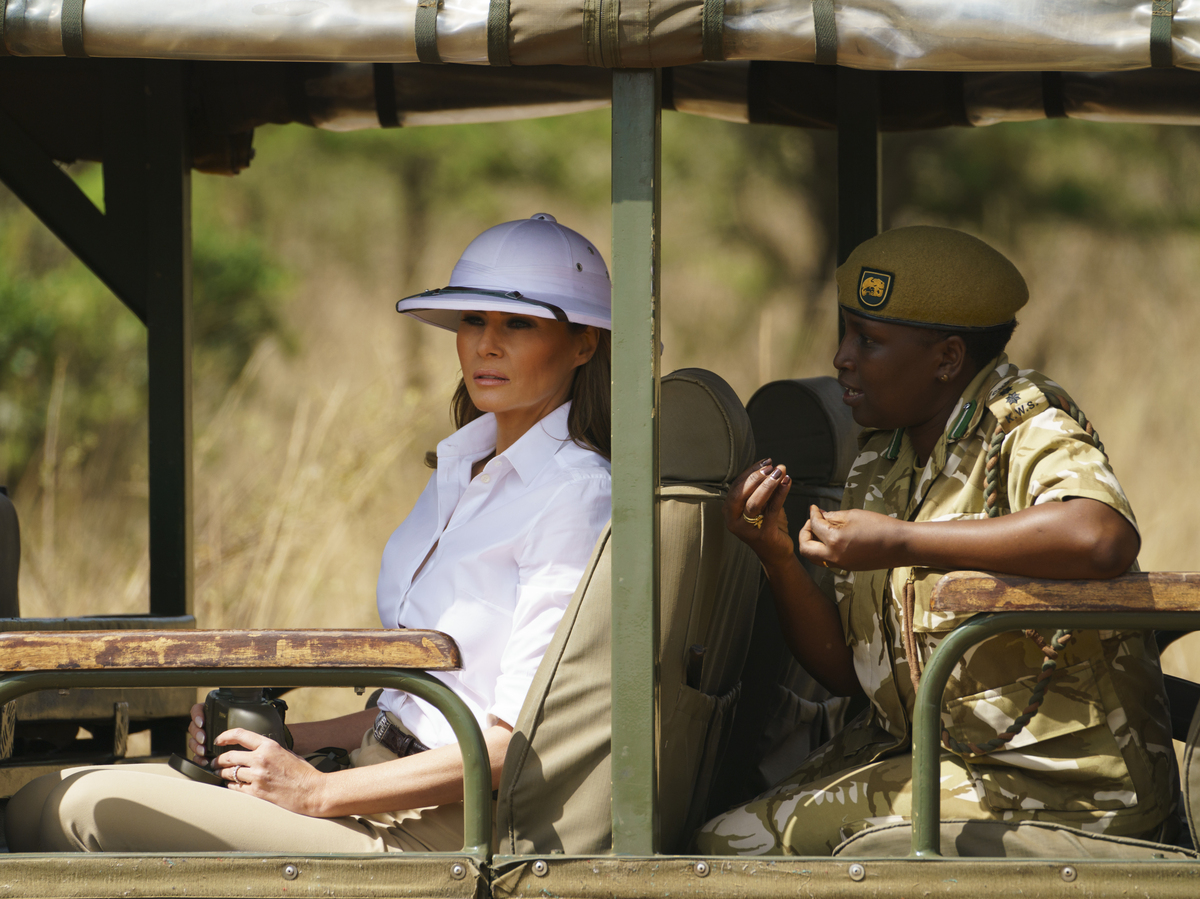 First lady Melania Trump looks out over Nairobi National Park in Nairobi, Kenya. Critics say the pith helmet she is wearing is a symbol of colonialist attitudes.

First lady Melania Trump wants people to stop talking so much about her fashion choices. Standing in front of the Great Sphinx in Egypt Saturday, she told reporters, "I wish people would focus on what I do, not what I wear."

Despite her expressed desires, a series of beige outfits Trump wore on her trip to Africa has been under scrutiny — not because critics find them unfashionable, but rather, because they say the clothing references harmful colonialist attitudes about the continent.

It's not the first time Trump has been in the news for an outfit. Remember that time when she wore an olive-green Army-type jacket with the words, "I don't really care. Do U?" printed on the back during a June trip to the U.S.-Mexico border? Many were puzzled, including CNN White House reporter Kate Bennett, who has covered Trump extensively. "This is a first lady who's very, very careful about what she wears and what messages she does send, from her clothes to her facial expressions to ... how she looks and acts," Bennett told NPR's Mary Louise Kelly. "We have to look for her nonverbal cues sometimes. ... This was a puzzler."

The sartorial choice attracting the most current scrutiny — and the choice Trump was specifically asked about in front of the Sphinx on Saturday — was a pith helmet, which she wore while she toured Nairobi National Park in Kenya on Friday. To critics, the helmet is an unmistakable colonial symbol.

Jason Burke explains in The Guardian that 19th century European explorers and imperial administrators in Africa, parts of Asia and the Middle East wore pith helmets, which were later incorporated into the uniforms of colonial military officers.

Laura Seay, an assistant professor at Colby College who studies African politics, conflict and development, tells NPR the pith helmet, a thick form of head protection, also came about because of unscientific — and later debunked — theories colonialists had about dangerous radiation in the tropics.

Even before the pith helmet, Seay had started a hashtag — #FLOTUSInAfricaBingo — to note the ways in which she found that Trump was "fulfilling a lot of stereotypes" on her trip.

"The way she's dressed and the activities she's undertaken reflect an outdated view of the continent," Seay says. "It's not a place looking for white saviors in colonial getup. It's a vibrant place where there's all sorts of innovation and creative problem-solving."

At Nairobi National Park on Friday, Trump fed baby elephants and took a safari ride. During the ride, she stopped to visit a site where ivory is burned in an effort to discourage the trade of that material. (In March, NPR's Colin Dwyer reported that the Trump administration lifted a ban on elephant trophy imports.)

Trump's trip, which took her to Ghana and Malawi as well, has also focused on children — one expressed purpose of the trip was to highlight her "Be Best" campaign, which promotes "encouragement, kindness, compassion and respect" among kids.

Seay insists that the valuable focus of a first lady could have been better applied in contexts that felt more representative of the triumphs and challenges of today's Africa. "Why didn't she go to a tech hub?" Seay asks. "Why didn't she ... talk to survivors of sexual violence or terrorism in Kenya?"

Seay did praise Trump for one item on her itinerary: a trip she took to Cape Coast castle, a former slave trading fort in Ghana. "It's very emotional," Trump said after her visit. According to the Associated Press, she said the visit was "a solemn reminder of a time in our history that should never be forgotten."

"We just completed an amazing trip — we went to Ghana, we went to Malawi, we went to Kenya, here we are in Egypt," the first lady told reporters Saturday. "I want to talk about my trip and not what I wear. That's very important ... what I'm doing with my initiatives."

When asked Saturday in front of the Great Sphinx about remarks, which NPR and other news outlets have reported, in which President Trump disparaged African nations, the first lady said they never came up during her trip: "Nobody discussed that with me and I never heard him saying those comments."