Accessibility links
Review: Jodie Whittaker Brings A Down-To-Earth Sensibility To 'Doctor Who" In a down-to-earth yet emotional season opener, Doctor Who introduces Jodie Whittaker's Doctor and her three companions. 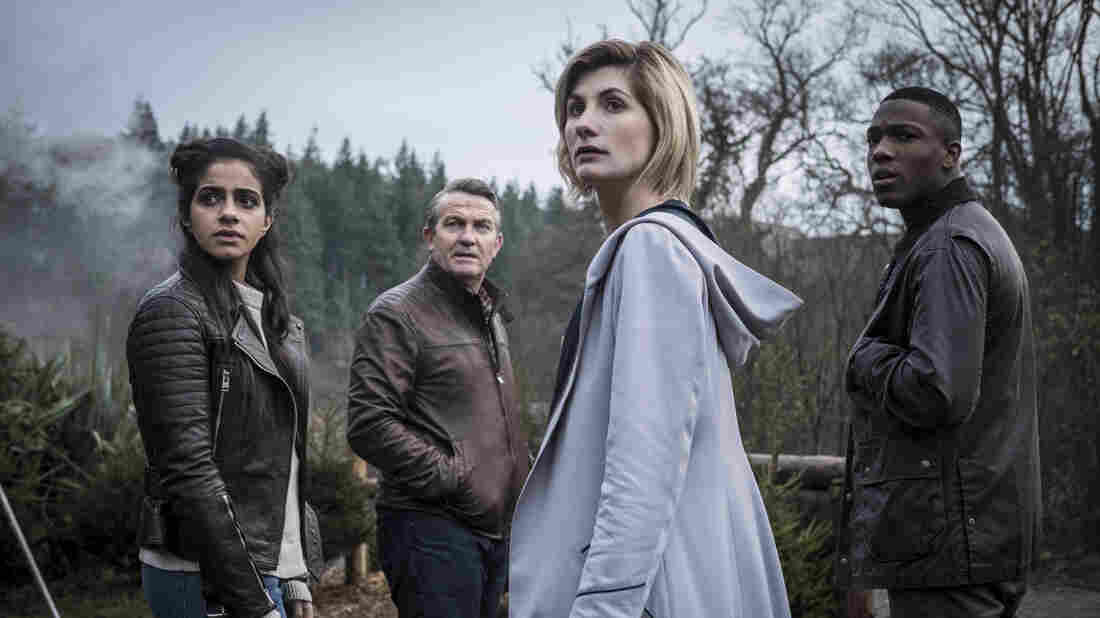 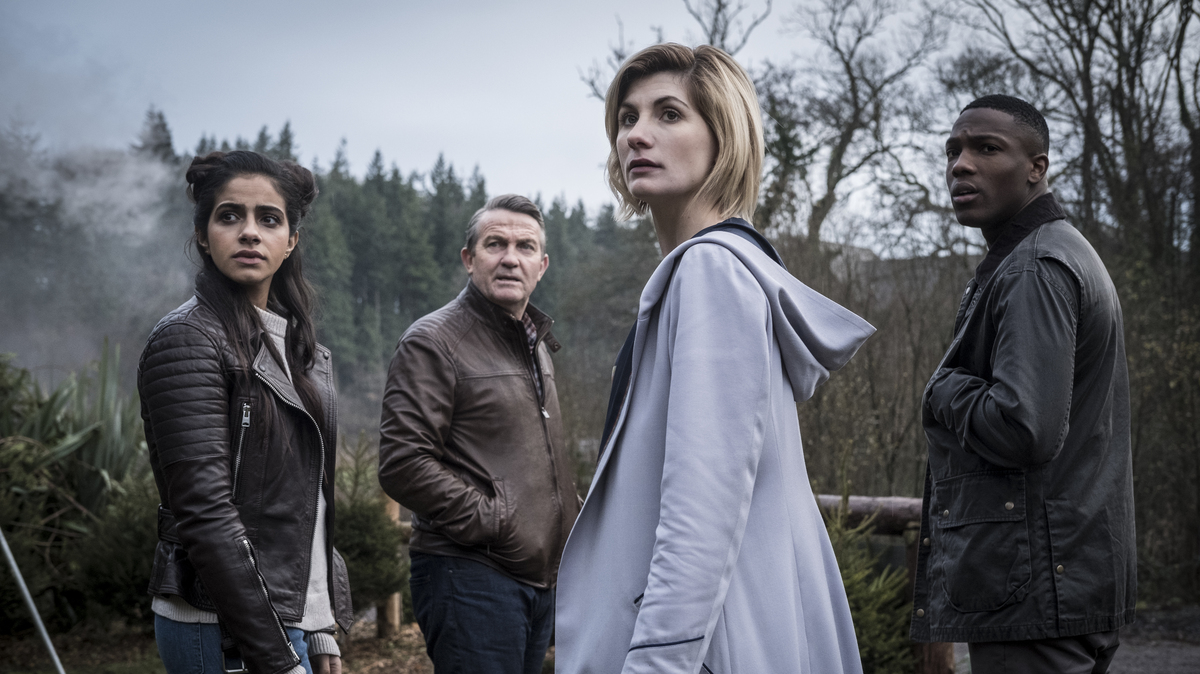 Don't be TARDIS for the ... part ... is. Yasmin (Mandip Gill), Graham (Bradley Walsh), The Doctor (Jodie Whittaker) and Ryan (Tosin Cole) in the new season of Doctor Who.

You know that joke-ish, brain-teasery thing about the doctor who says "I can't operate on my own son," but you're told the doctor isn't the patient's father, and the answer turns out to be that the doctor is a woman? It works, to the feeble extent it does, because it rests on our unconscious, culturally programmed preconceived notions — the kind of sexist background radiation that bombards us every day. You just assume the doctor is a man, for no clearly definable reason.

That's how the venerable British science-fiction adventure show Doctor Who worked for decades, despite the fact that its central character is defined by the ability to regenerate into an entirely different body (once the actor undertaking the role tires of all that running around and shouting technobabble and patiently Who-splaining the dire situation at hand to the nearest uncomprehending Earthling).

With the announcement that Jodie Whittaker would be assuming the role of the 13th Doctor, the show about time travel finally set foot in the 21st century. Something we've always sort-of known is now canon: The Doctor can be any sex, any gender, any race. The only thing that matters is the character's heart(s). As one wise cultural observer once opined, the show is about the triumph of intellect and romance over brute force and cynicism.

It would be a mistake to think that Whittaker's hire means there are now no limits on who can play The Doctor, however. As "The Woman Who Fell To Earth," the emotional and (literally) down-to-earth season opener on which Whittaker made her debut, amply demonstrated, the Doctor can be anything, as long as it's British.

With her rich Northern accent (the actress was born in Yorkshire), Whittaker's Doctor isn't posh or effete — no bow ties or fezzes for her. Instead she radiates pragmatism (if pragmatism is a thing that can radiate) and a decidedly middle-class, we're-all-in-this-together enthusiasm. At least, she seems to — "The Woman Who Fell To Earth," like all new-Doctor debut episodes, showed The Doctor still a bit jumbled from the regeneration process, and working to figure out who she is. As for the much ballyhooed change of sex, it merits precisely one quick throwaway exchange ("Why do you call me ma'am?" "Because you're ... a woman?" "I am? Does it suit me?") before she gets on to the business of saving the day.

It's not the first time we've heard short Northern vowels coming out of a modern-day Doctor's face; Christopher Eccleston's Ninth Doctor, after all, was forever shouting "Run" with a distinctive Mancunian trill on the R. (Eccleston was born just a 40-mile hop down the M62 from Whittaker.) When you throw in fellow modern-Doctors David Tennant and Peter Capaldi (both Scottish), it does seem Gallifreyan DNA has a peculiar fondness for patterning itself on the gene pool of the northernmost bits of the United Kingdom.

The episode itself was, as the Brits say, bog-standard, as far as Who episodes go. The monster-of-the-week — a Predator knockoff who looked like he'd been sent by Rita Repulsa to battle the Power Rangers — proved the weakest element, as is often the case. (New showrunner Chris Chibnall has said Whittaker's first season will rely on original villains, not classic foes like the Daleks and the Cybermen; if that's the case, and this episode's Halloween-store-clearance-sale bad guy proves representative, we're in for a long season.)

Much time and attention was devoted to setting up our four, then three, companions: Bus driver Graham (Bradley Walsh), police officer Yas (Mandip Gill) and young warehouse worker Ryan (Tosin Cole). Brought together by chance and united by tragedy, the three promise to bring a dynamic to the series we haven't seen since old-school Who: A team of colleagues with different skill sets. Modern Who has defaulted to "companion nurtures unspoken romantic feelings for The Doctor" so often that this should make a welcome change.

The grounded nature of the episode — The TARDIS is missing in action, forcing The Doctor to improvise a plan in and around greater Sheffield — played to Whittaker's strengths. Capaldi's quick-tempered, exasperated headmaster persona is utterly gone, replaced by something warmer and more empathetic. Her Doctor is just as brilliant and other-worldly as ever, but it's couched in something earthier.

The series will soon get back to the usual time-hopping and planet-trekking, but it seemed to want to make a point, in Whittaker's debut, of planting its flag firmly on British soil. All those loving shots of The Peaks National Park. An alien attack that occurs on a (gasp!) train. The Doctor constructs her own sonic screwdriver out of "solid Sheffield steel," and chooses her new outfit in a shop on Sheffield's high street. And the climactic battle, when it comes, occurs not on some gorgeous windswept alien landscape but on a ... construction crane.

It makes sense. Doctor Who has always melded sci-fi spectacle (or as near to spectacle as its special effects budget allows) with mundane, workaday life on Earth. In this first outing, Whittaker's Doctor has nailed the basics, and stepped out from the long shadows cast by previous Doctors.

She's shown us that her Doctor is down-to-earth. But great Doctors are made out among the stars — fingers crossed that, now that she's back in space where she belongs, her first season will give her everything she needs to shine on her own.

An earlier version of this story misspelled the name of the actor who played the Ninth Doctor. He is Christopher Eccleston, not Eggleston.