Accessibility links
Who Is Brett Kavanaugh, New Supreme Court Justice? Here's a brief look at some key information about Kavanaugh as he begins his lifetime appointment to the nation's highest court. 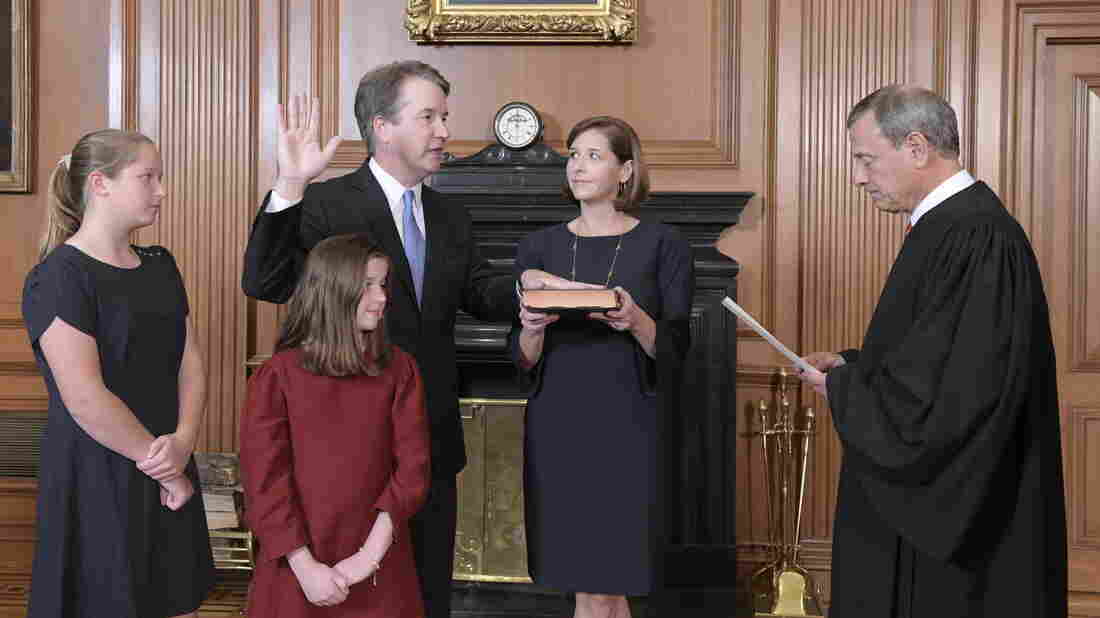 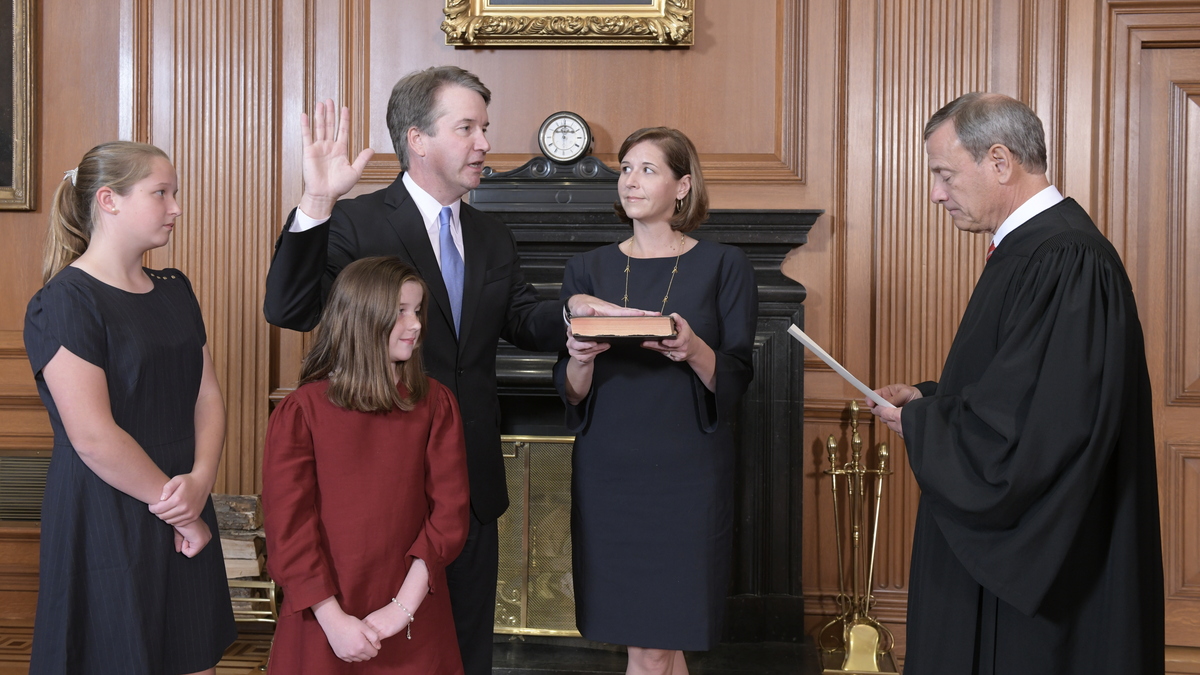 In this handout photo provided by the Supreme Court, Chief Justice John G. Roberts, Jr., administers the constitutional oath to Judge Brett M. Kavanaugh as his wife Ashley Kavanaugh holds the Bible while joined by their daughters Margaret and Liza at the Supreme Court Building on Saturday in Washington, D.C.

Justice Brett Kavanaugh became the newest associate justice of the Supreme Court when he was sworn in Saturday evening.

On Tuesday morning, he will sit to the left of Justice Elena Kagan, in the most junior spot on the high court's bench, and will hear arguments in three criminal cases before the court.

Here's a quick look at some key information about Kavanaugh as he begins his lifetime appointment to the court.

"As long as I've been following the court, the major way to think about the court is in terms of who is the swing justice," said former George W. Bush Solicitor General Paul Clement at a Supreme Court discussion in September. With Kavanaugh on the bench, Clement said, "I'm not sure there will be one."

Willing to uphold restrictions on abortion: Most observers believe Kavanaugh will uphold greater abortion restrictions than Justice Kennedy would have. They point to his dissent in Garza v. Hargan, which would have upheld an Office of Refugee Resettlement (ORR) decision to prevent a 17-year-old from temporarily leaving ORR custody to obtain an abortion, even though a Texas judge had already granted the minor a judicial bypass for the procedure. Kavanaugh argued that the agency should have had more time to find a sponsor for the minor to live with before she made the decision to end her pregnancy.

At a Supreme Court preview in September, former Obama Solicitor General Donald Verrilli Jr. predicted that with Kavanaugh on the bench, Roe v. Wade will be overturned, at least in part, within five years. "These are highly principled people," Verrilli says, "and Roe is incompatible with their most deeply held views about how you ought to understand and interpret the Constitution."

Skeptical of administrative power: Kavanaugh is skeptical of judges deferring too much to administrative agencies, and in particular has questioned the applicability of the Chevron doctrine, the principle that judges should defer to reasonable interpretations by agencies when statutes are ambiguous. He has argued that judges should stop looking to whether statutes are ambiguous and instead "strive to find the best reading of the statute" themselves.

On U.S. Court of Appeals for the D.C. Circuit, he dissented in several environmental cases because he believed that the EPA was not interpreting its governing statutes reasonably. 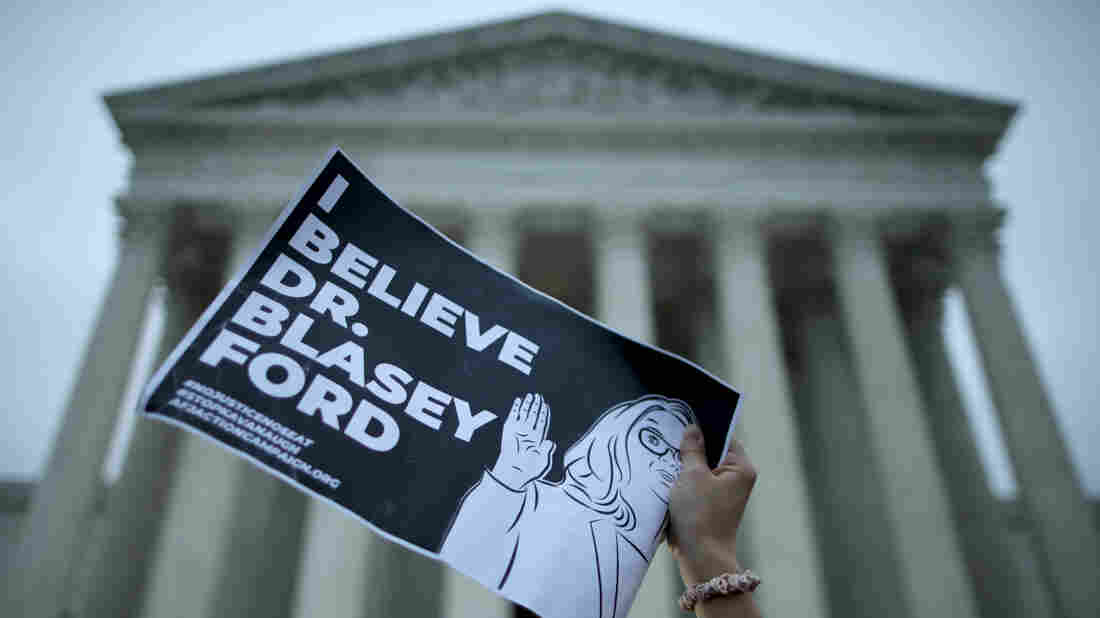 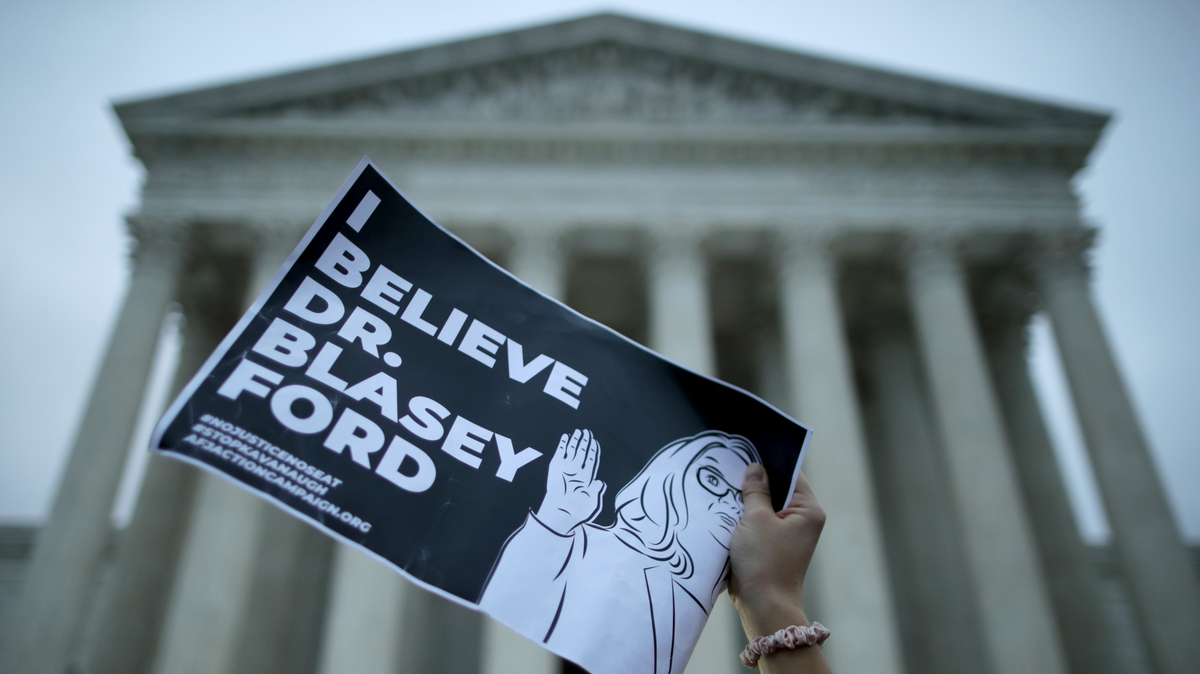 Protesters gather on the steps of the U.S. Supreme Court building after over running police barricades while demonstrating the confirmation of Associate Justice Brett Kavanaugh Saturday in Washington, D.C.

Unpopular overall and a factor for the midterms: Even before the sexual misconduct allegations against him, Kavanaugh had been polling as one of the least popular Supreme Court nominees in recent times. However, a recent NPR/PBS NewsHour/Marist poll found that amid the Kavanaugh controversy, the gap in the enthusiasm between Republicans and Democrats for the midterms has closed.

Has political roots...: Kavanaugh joined independent counsel Kenneth Starr's team in 1994 to investigate then-President Bill Clinton. He worked as a regional coordinator of the 2000 Bush-Cheney campaign and was a member of Lawyers for Bush-Cheney during that campaign. After George W. Bush took office, he served as a White House counsel and then as the president's staff secretary until 2006, when he was confirmed to the D.C. Circuit. He was originally nominated in 2003, but Democrats held up his nomination for three years, arguing that he was too partisan.

... and elite credentials: Kavanaugh is the second member of the current Supreme Court to graduate from Georgetown Preparatory School, the elite Jesuit high school in suburban D.C. made famous this fall because of Christine Blasey Ford's sexual assault allegations. Justice Neil Gorsuch, Trump's first nominee to the high court, graduated from the school in 1985, two years after Kavanaugh did.

Kavanaugh went on to Yale College and Yale Law School. He clerked for Judge Alex Kozinski on the 9th Circuit Court of Appeals, who recently retired amid sexual harassment allegations, and Justice Anthony Kennedy on the Supreme Court, whose seat he will now occupy.