Accessibility links
'The Hate U Give' Creators Tell Their Story Through A 16-Year-Old Black Girl Director George Tillman Jr. and Angie Thomas, who wrote the book behind the new movie, see some of their own experiences reflected in their lead, an African-American teen in a rich white prep school. 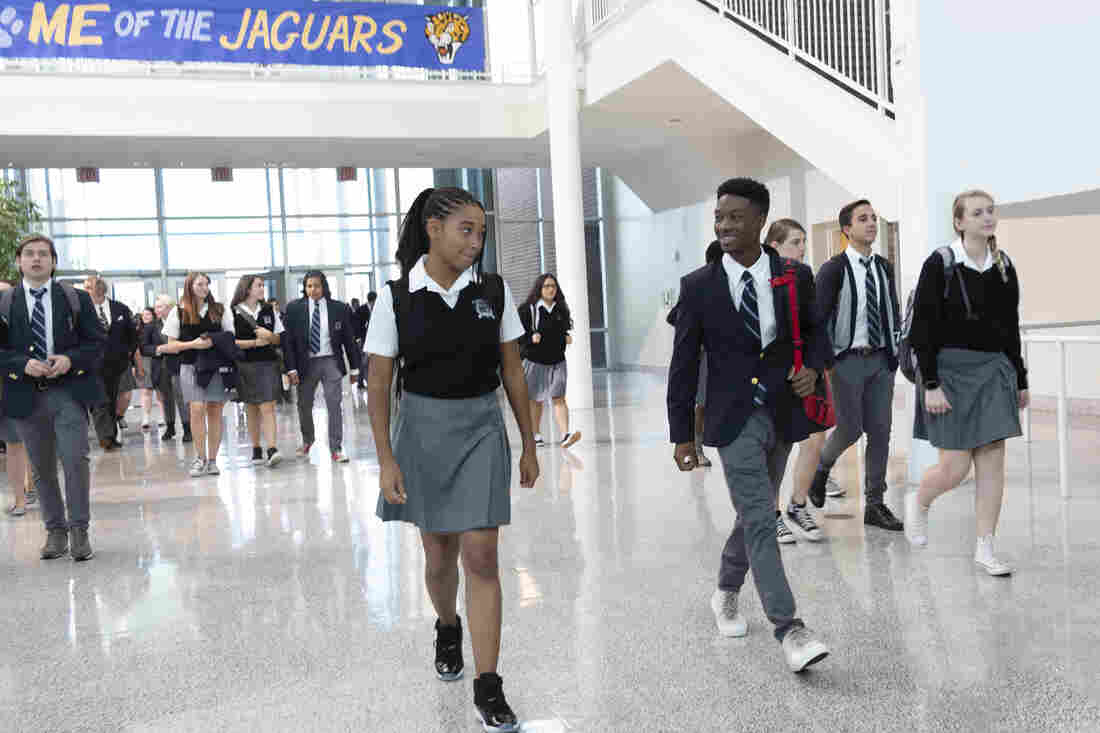 Starr Carter (played by Amandla Stenberg, left) is a black student in a primarily white prep school in The Hate U Give. Erika Doss/Twentieth Century Fox hide caption 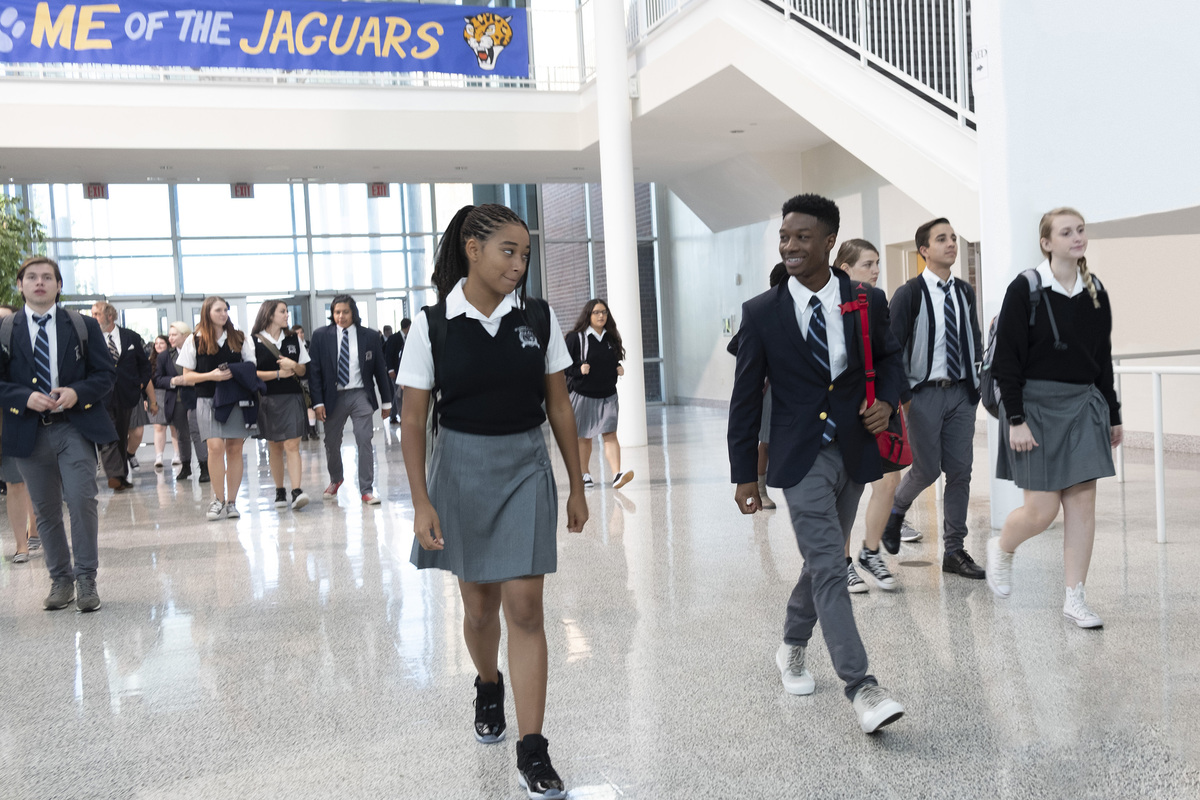 Starr Carter (played by Amandla Stenberg, left) is a black student in a primarily white prep school in The Hate U Give.

The Hate U Give tells the story of a 16-year-old girl named Starr Carter. She lives in a mostly black, lower-income neighborhood called Garden Heights. Williamson Prep, her high school, is in a mostly white, affluent part of town.

But Starr can't keep her two worlds separate after she witnesses a white police officer shoot and kill her childhood friend, Khalil.

The Hate U Give was first a young adult novel by Angie Thomas. Now it's also a movie directed by George Tillman Jr. We talked with Thomas and Tillman about how their works reflect some of their own experiences.

Tillman: You know, it was a very emotional scene. I remember Russell Hornsby, who plays Mav Carter, would choke up because he has kids himself. I have a 15-year-old son. So it was a very emotional time because in the African-American community, that is something that every kid have been through one way or another. For me, it was with my uncles and my dad. You know, they came out of the MLK riots, you know, in '68 with family members in Detroit and Milwaukee, Wis. So all those things were planted inside me.

So in the movie, you know, it's two young kids who actually hearing the scene for the first time. It was just emotional. This deals with history. This deal with survival and how we can continue to stay on this earth without police brutality or being shot or being killed. You know, this is part of the fear of the African-American community. 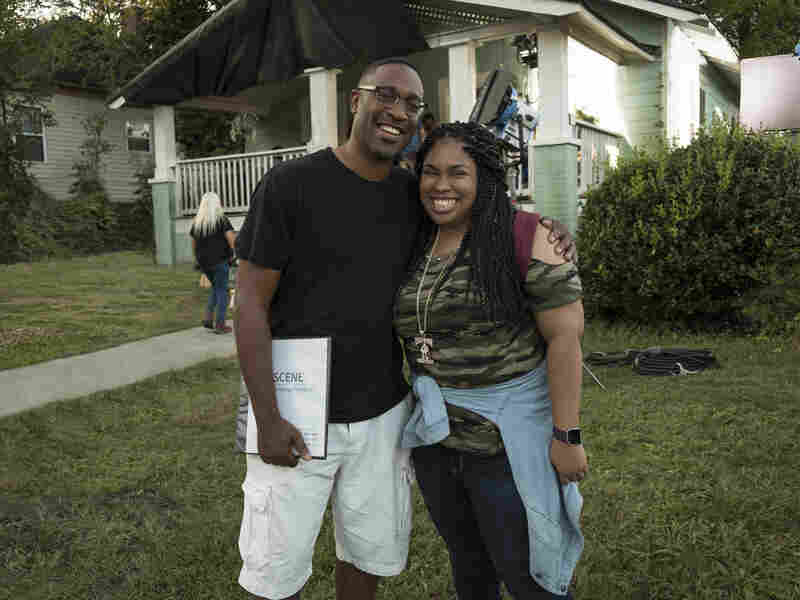 Director George Tillman, Jr. and author Angie Thomas pose on the set of The Hate U Give. Erika Doss/Twentieth Century Fox hide caption 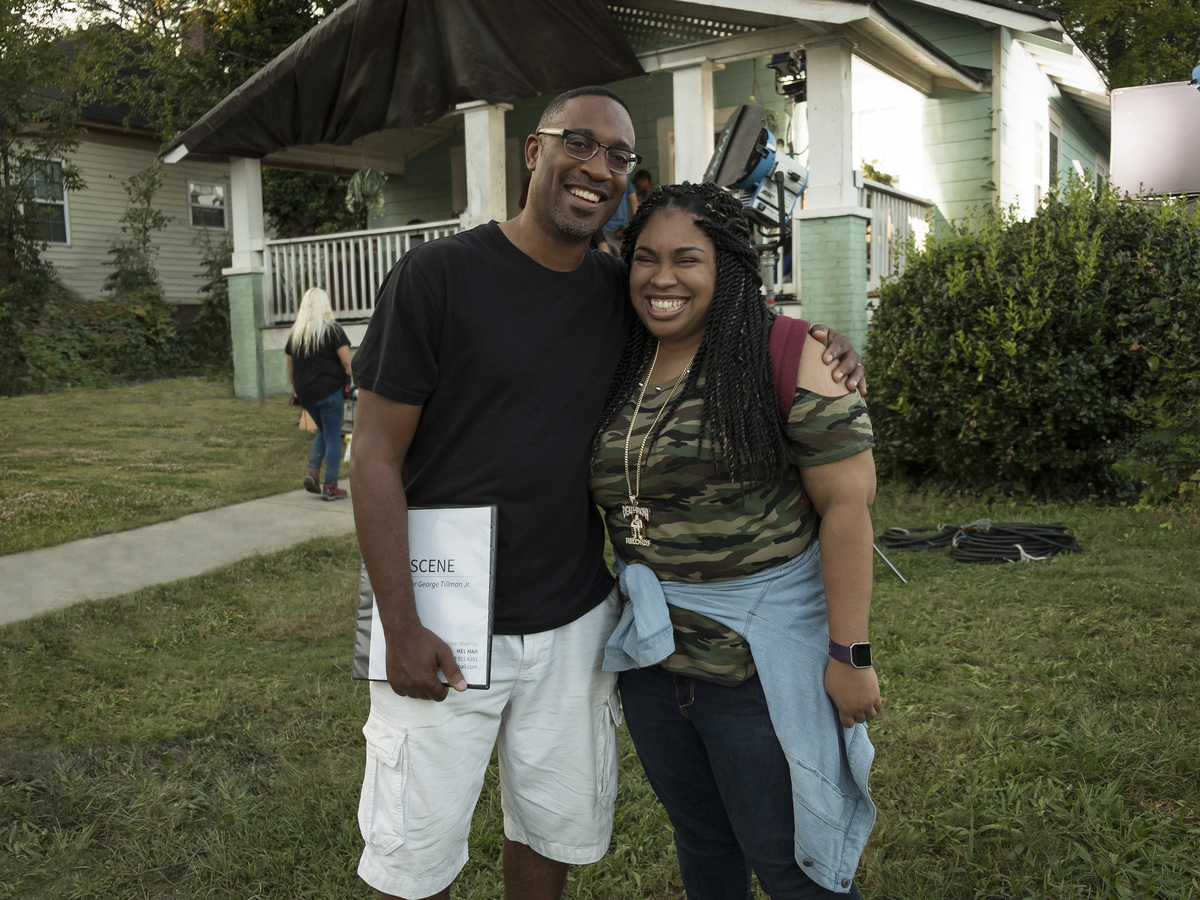 Director George Tillman, Jr. and author Angie Thomas pose on the set of The Hate U Give.

Thomas: It was a struggle. I did — I lived in a mostly black, poor neighborhood in Jackson, Miss. And I went to a mostly white, upper-class, private school just 10 minutes away from my home. But in 10 minutes, it was like going into an entirely different world. So I overcompensated by doing what's called code switching.

One time, one of my professors had a party at his house for Christmas, and he had a huge Christmas tree with a big pile of gifts underneath. And we could all pick a gift. And it was like gag gifts, like whoopee cushions and all of this other stuff he was just trying to get rid of. And when it was my turn, I picked a gift. And there was a prescription drug book inside and a toy water gun. And one of my classmates goes, "Oh my God, the black girl from the ghetto got the drug book and the gun, how funny."

And because some of my classmates were laughing — and I just made myself laugh because I thought I had to. And that was one of those moments where I was so angry at myself for not speaking up. And honestly, that was a defining moment for me because I had to realize that I was worth speaking up for if nothing else, and that they needed to know that even a joke like that is not OK. So for me, that was the moment I said, "You know what? I am not going to be silent again."

On the scene where Starr's uncle, a black police officer, explains his approach to black suspects

Tillman: That scene was a very important moment in the book. And I really wanted to show all the sides, you know? ... The idea of how the system, you know, for police officers — and how that goes all the way back to the idea of the slave patrols with free slaves. And that's a system that is taught. And sometime that system can be taught with African-Americans as well. So you have that version. And then also, you have another layer on top of that — is that sometimes as African-Americans, we have racism and bias inside ourselves and how we see other African-Americans as well.

Thomas: I'm a huge young adult fiction fan anyway, and I always knew I wanted to write young adult fiction. But it was definitely a decision early on to write this from the perspective of a 16-year-old girl for several reasons. The first reason for me was because so often, victims in these cases are teenagers. They're young people. Trayvon Martin was 17. Tamir Rice was 12. And I think about those kids who look at them and see themselves, and I wanted to talk to them first and foremost.

But I also knew that when adults pick this book up, they would be more likely to empathize with a 16-year-old girl than a 30-year-old woman. For some audiences, there is something about getting it from the perspective of someone who has so much innocence, who has so little experience. You literally witness this girl become a woman. You see her forced into adulthood because of her trauma. And I think there's something about that. At least for adults, there's something about seeing a child go through this. And my hope was that people will look at real-life 16-year-olds in these cases and actually see them as children and not as adults.

Mallory Yu and Emily Kopp produced and edited this story for broadcast. Patrick Jarenwattananon adapted it for the Web.