Accessibility links
Trying Not To Break Down — A Homeless Teen Navigates Middle School About 2.5 million children in America are homeless. In Boise, Idaho, 14-year-old Caydden Zimmerman struggles with the anxieties of middle school while living in a homeless shelter. 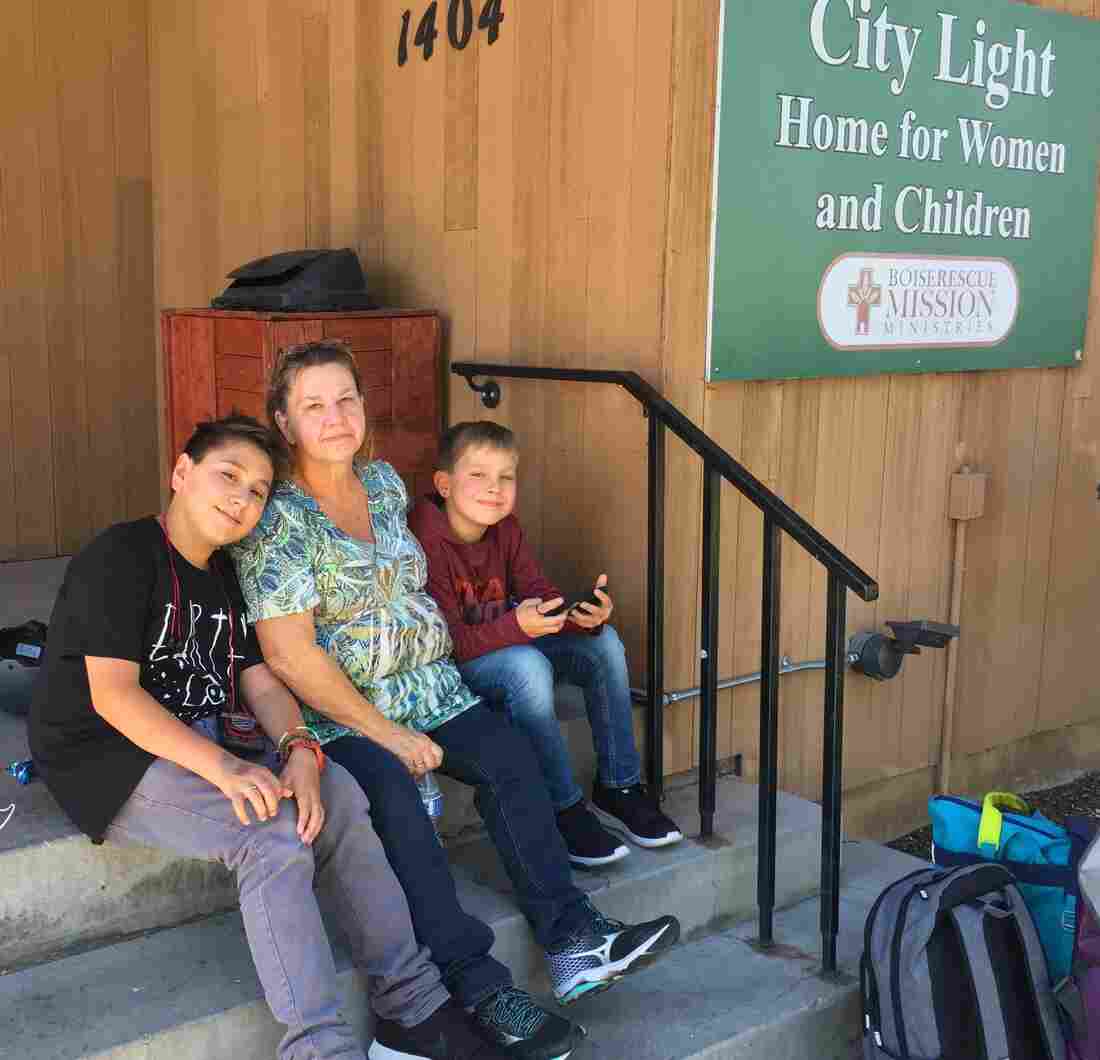 14-year-old Caydden Zimmerman has been living in a homeless shelter in Boise, Idaho, for a couple of months with his 11-year-old brother and his grandma. About 2.5 million children in America are homeless. Amanda Peacher/Boise State Public Radio hide caption 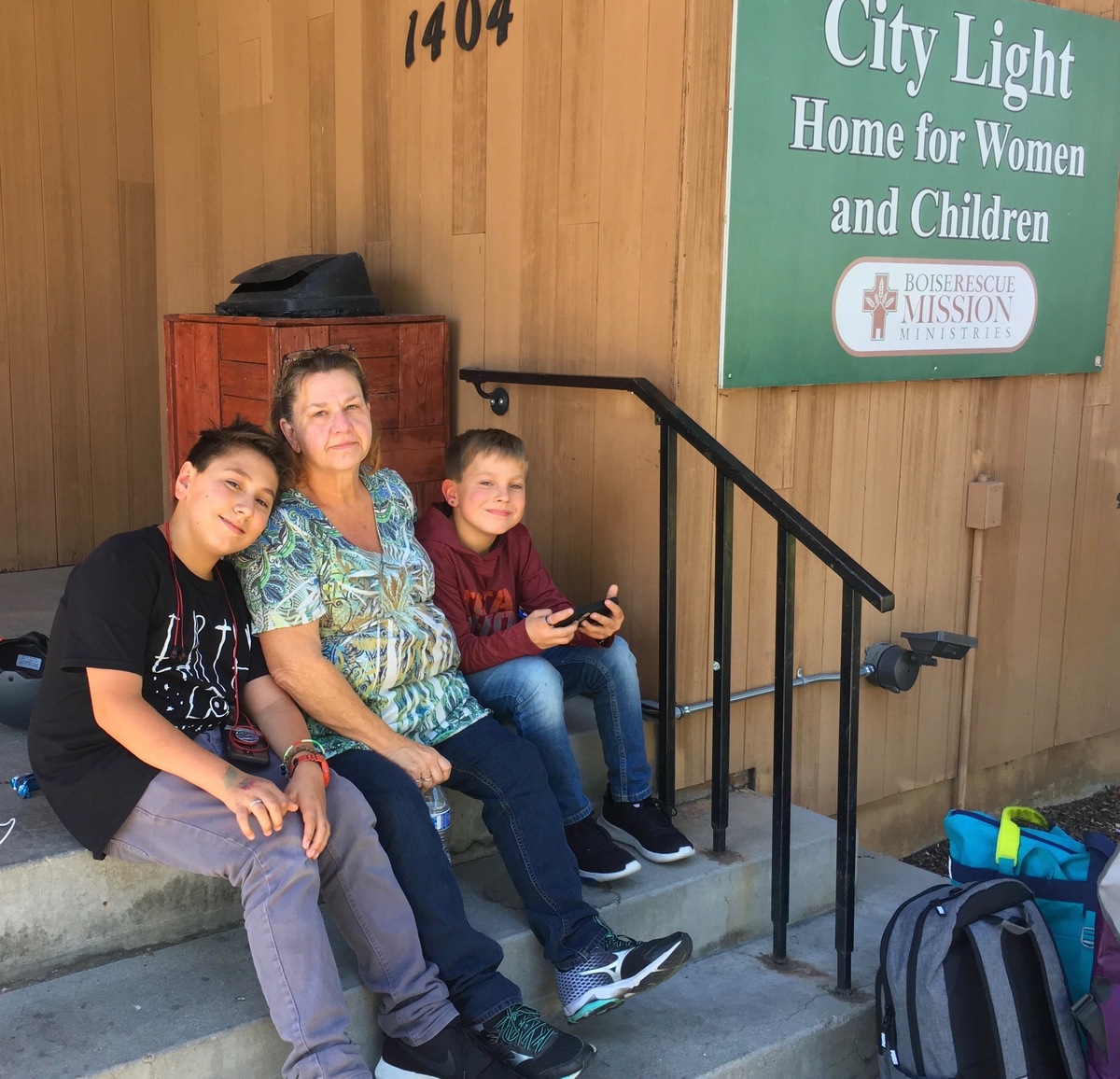 14-year-old Caydden Zimmerman has been living in a homeless shelter in Boise, Idaho, for a couple of months with his 11-year-old brother and his grandma. About 2.5 million children in America are homeless.

He has a 90-minute bus ride to get from the homeless shelter where he is staying in Boise, Idaho, to his middle school. He wakes up at 5:45 a.m., quickly brushes his teeth and smooths some gel in his hair, and then he dashes downstairs to catch his school bus.

About 2.5 million children in the U.S. currently are homeless, according to the National Center on Family Homelessness. That number is rising as house prices and rental costs continue to grow in cities large and small, and the trend is clearly visible in Boise — the fastest-growing city in the nation.

Caydden has been living at City Light Home For Women and Children for a couple of months now with his 11-year-old brother, Keston, and his grandma, Pam Cantrell. Cantrell says they moved there after getting an eviction notice at their former duplex.

"The landlord decided to sell the property, and we just could not find a place we could afford," Cantrell says. "The more I looked, the more depressed I got. I just, I didn't know what to do."

Like Cantrell and her grandsons, many low-income families in Boise struggle to find housing they can afford. Cantrell gets a small disability stipend from the government, but that's nowhere near enough to cover rent and other expenses.

The boys' mother is addicted to drugs and struggles with mental illness, Cantrell says, which is why grandma is the boys' full-time caretaker now.

"I grew up being alone, raised by my older brother and my grandma," Caydden says. "She means everything. Without her I wouldn't be here. I'd probably be dead somewhere."

After three months of searching, the shelter became their only option. Cantrell is grateful to have a place to stay but says not having a permanent home is really hard on her grandsons.

"My youngest one, he can be a little terror, because he's upset by it," Cantrell says. "He gets angry, and he'll sit in the corner and say, 'I hate this place, I hate this place.' "

"It's just an effort to try not to break down"

It's difficult for Caydden too, but you wouldn't know it. Caydden is a social 14-year-old with a big smile. One of his favorite things about school is seeing his friends.

"My friends know about it — me being homeless — they don't tease me on it," Caydden says. "They just know that I'm doing it, I'm trying to work hard. And it's just an effort to try not to break down."

Homeless kids tend to score lower on standardized tests and have lower graduation rates. It's harder to concentrate when you're anxious and worried. And sometimes Caydden does break down with his friends.

"They always bring me up when I'm feeling down," he says. "They make me smile when I'm sad."

Caydden's grades have improved since he started at this alternative middle school for students who struggle in traditional academic settings. The school district received a grant to pay for a bus to transport homeless students who are scattered across the Boise area.

Homeless students often bounce around to different schools as their living situations change. That can make it nearly impossible to keep up, so Pathways Middle School Principal Eric Eschen wants to do everything he can to keep tabs on students like Caydden.

"He's a very positive student, very giving, a very good friend," Eschen says. He points to a recent time when Caydden approached him to alert him that another student was making a mess with mustard in the bathroom. He took it as a sign that Caydden cares about the community and the school. For homeless kids, sometimes school can be a place of refuge and consistency in an otherwise hectic and messy world.

Eschen keeps an eye on Caydden because, like a lot of students in his situation, he struggled with absences last year.

"That really affected him and affected his progress, so we've got some catch-up to do this year," Eschen says.

At the end of the school day, it's another 90-minute bus ride before Caydden meets his grandma on the steps of the homeless shelter. They wait outside for Caydden's brother to arrive on another bus. Meanwhile, Caydden checks in with Cantrell about the week's schedule.

"Grandma, on Friday are you just going to go in and wait for me and Keston?" he says. "Cause you've got laundry."

"Yeah, I probably will," Cantrell says. She has to keep Caydden apprised of her comings and goings at the shelter so that he won't worry.

Caydden has had to grow up faster than your typical 14-year-old. With his dad out of the picture and his mom's drug addiction, he often had to be responsible for his little brother.

"Help get him ready for school, I had to make sure Mom wasn't ... gone," Caydden says. "I had to feed Keston when Mom was passed out for days. There was one time when we only had cereal for, like, two weeks."

Caydden has been trying to convince his grandma that she should let him get a job so he can help with rent. He'd like to earn money at a fast-food restaurant or, at the least, raking leaves and shoveling snow.

"It's like something I want to do," Caydden says. "I just want to help out."

But Cantrell, aware that her grandson has already been through more than most teenagers, won't have it.

"You are not getting a job. You need to be a child as long as possible, Caydden," she says, patting his knee. "You don't want to be in a big hurry to grow up, honey." 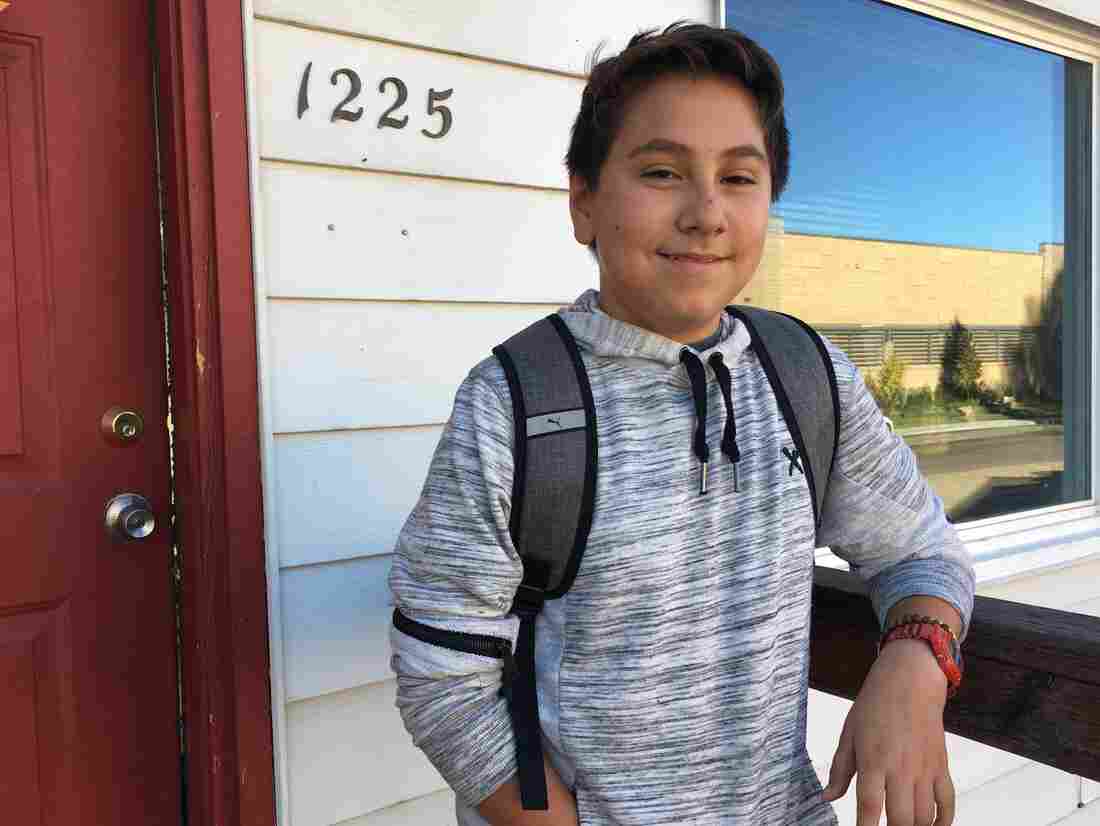 Caydden wakes up at 5:45 a.m., quickly brushes his teeth and smooths some gel in his hair, and then he dashes downstairs to ride 90 minutes in a school bus to get to class. Amanda Peacher/Boise State Public Radio hide caption 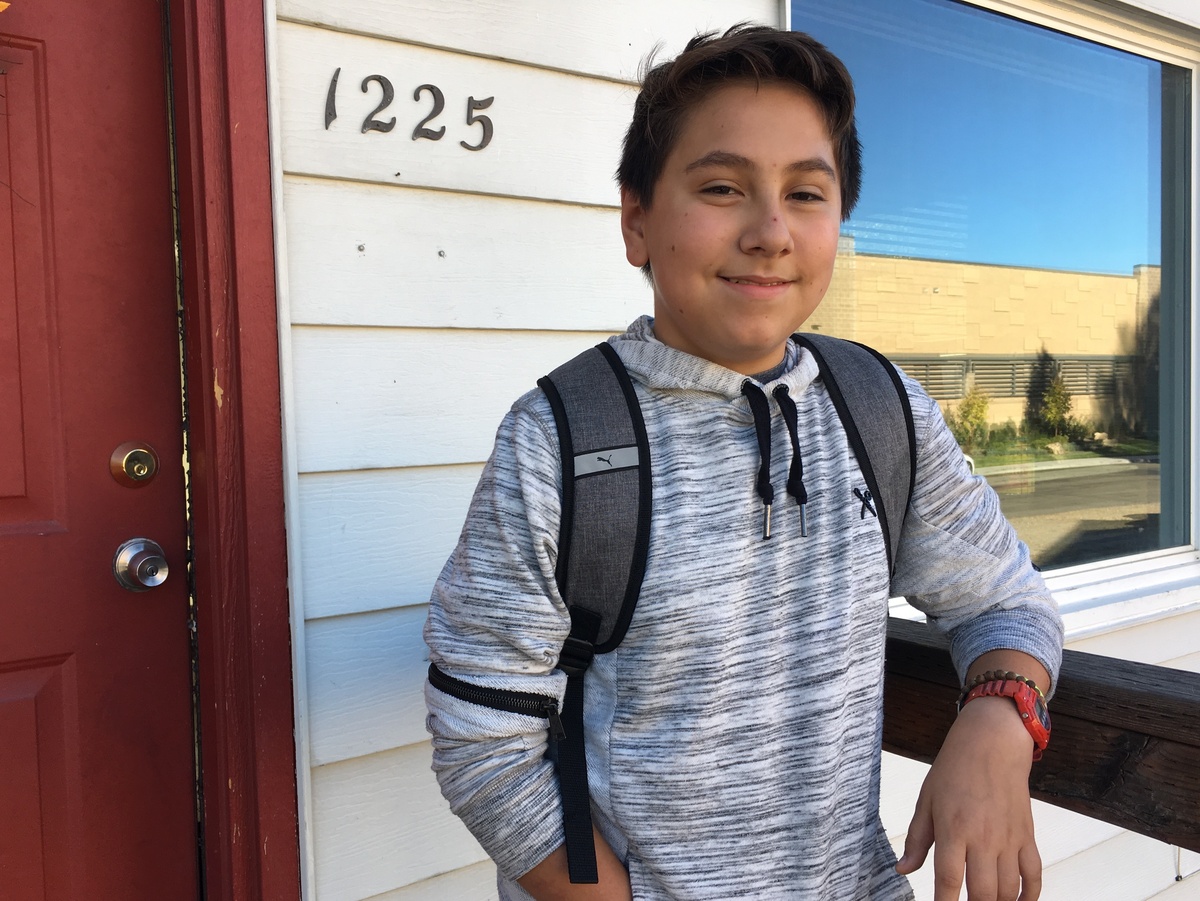 Caydden wakes up at 5:45 a.m., quickly brushes his teeth and smooths some gel in his hair, and then he dashes downstairs to ride 90 minutes in a school bus to get to class.

A few weeks later, there's good news in Caydden's world — they found a house. It's about 700 square feet that they share with another woman from the shelter. Caydden sleeps in the basement, in a tiny room with concrete walls and a small window. Cantrell and Keston sleep on inflatable mattresses in the living room.

"It's not the greatest, but it's not the worst," Cantrell says. She's been working on sprucing up the place. She plans to brighten up the living room with fresh paint.

But for Caydden, it's a huge improvement.

"I feel much more comfortable and safe," he says. He loves that the house is near Boise State University and has a weed-filled backyard that backs up to an alley. On football game days, he figured out that he can sell parking spots in the yard to game-goers.

"Last weekend we made 90 bucks!" Caydden says. He's scheming about trying to sell sodas on game day, too.

But probably most importantly, he can claim something he hasn't been able to for quite some time:

This story was produced by the Mountain West News Bureau.

In a previous version of this story, we misspelled reporter Amanda Peacher's name as Amanda Preacher.