Accessibility links
Natalia Lafourcade Is The 21st Century's Guardian Of Cultural Memory In many ways, Lafourcade has left her mark on the 21st century by looking back. Her work has freed music that for many younger listeners had been trapped in amber, and imbued it with new life. 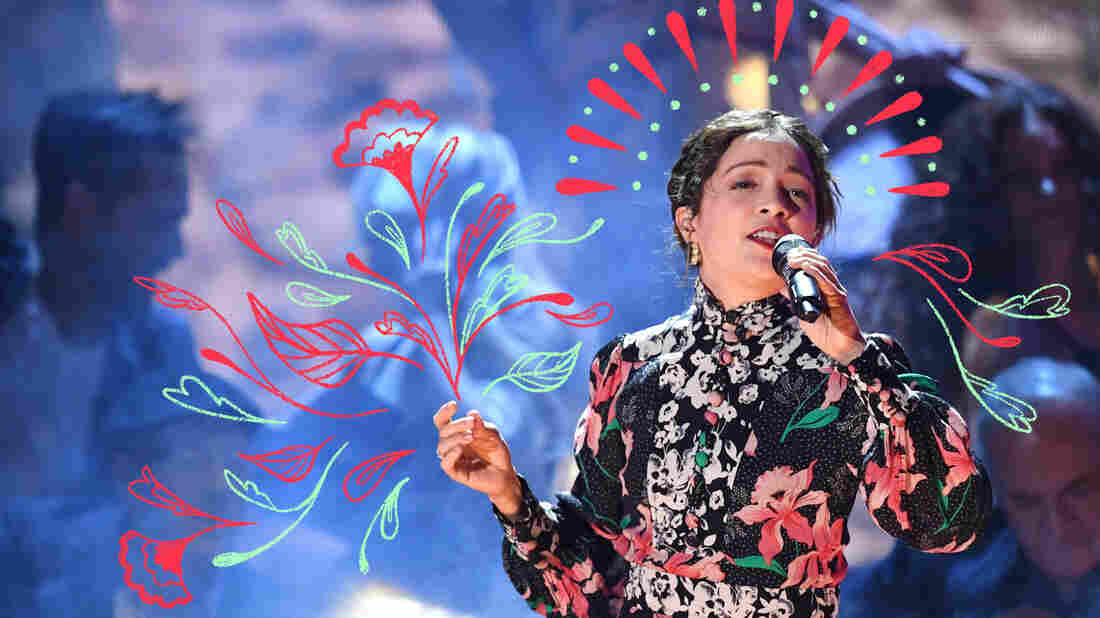 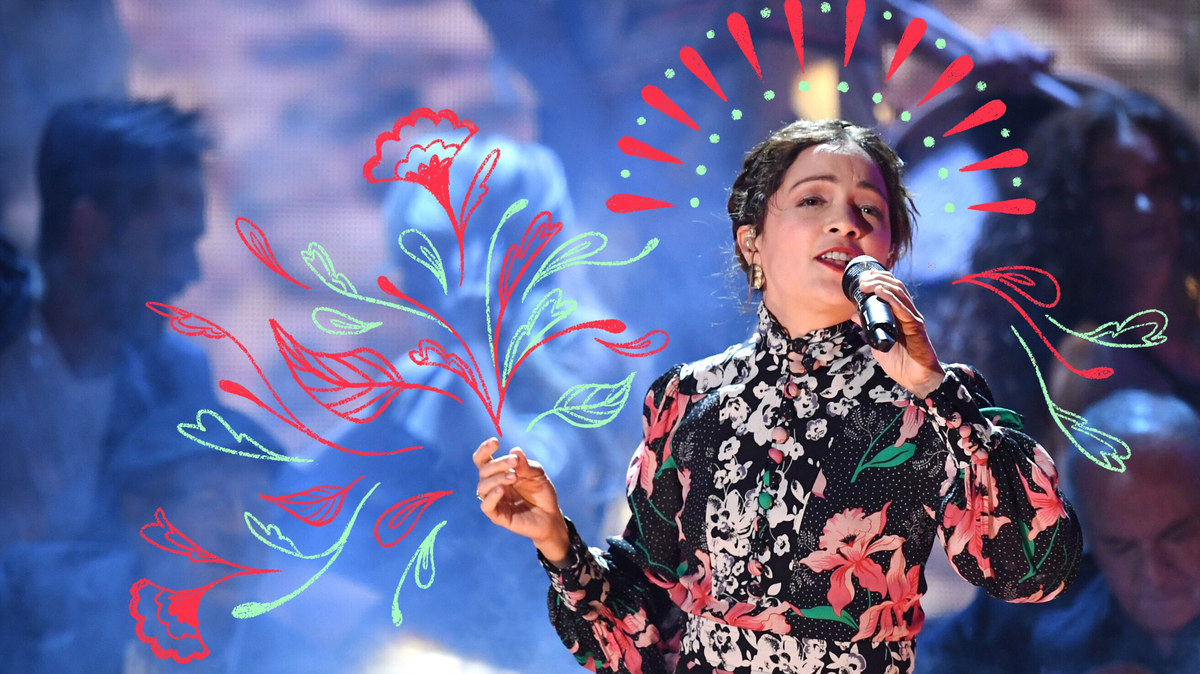 Natalia Lafourcade performs at the Latin Grammy Awards in 2017.

Particularly in times of insurmountable struggles, Latin America has harnessed strength from its traditions. When countries experienced a surge of violent political upheavals in the 1970s, people achingly turned to their folk roots as a salve for the times, birthing the nueva cancion movement across the continent. In Chile, musician and activist Violeta Parra recorded some of the region's most time-honored melodies, while in Venezuela, Simón Díaz preserved the musica llanera of his country's plains. Argentina's troubadour Atahualpa Yupanqui appointed himself "a singer of forgotten arts," intent on keeping the world from forgetting "what is unforgettable." These artists understood the power that lives within cultural heritage, and their impulse was to protect the sacred reservoir of Latin American songs.

But in the decades since, a gulf seemed to widen between Spanish-language folk music and music of the modern day. A welcome gush of genres, from reggaeton to electro to trap en español, has revolutionized and improved the contemporary Latin musical landscape while leaving a persistent question of who might step forward to safeguard Latin America's folk soundtrack — and maybe even add to it as well.

Perhaps no one initially expected that person to be Mexico's Natalia Lafourcade. The plucky, pixie-like singer-songwriter swung onto the scene as a member of the short-lived girl band Twist in 1998, before making her solo debut as a wide-eyed multi-instrumentalist with a flair for precocious songwriting. In 2003, she dropped a self-titled debut loaded with gleeful quirkiness and gutsy introspection and, over the years, assembled and unassembled a band — Natalia y La Forquetina — that followed the pop-rock paths paved by Julieta Venegas and '90s-era Shakira. Especially on Lafourcade's excellent 2009 release Hu Hu Hu, she also recalled the spirit of many indie darlings of the English-speaking world at the time — the plink of dainty pianos and the trills of her guitar received frequent comparisons to music by Lily Allen, Regina Spektor and Kate Nash.

Had Lafourcade continued forging ahead with her brand of twee rock, she likely still would have become a refreshing fixture in the Latin music realm. But while some artists stake their territory by keeping an eye toward the future and forecasting new directions, Lafourcade has left her mark by looking back. Starting in 2011, she began diving into her roots — tentatively, in the beginning, and then with a hungry vigor, splitting the cannon open and unleashing the spirits of Latin America's luminaries into our present day. With her ability to weave history into the mainstream, Lafourcade has brought the past soaring into the 21st century and established herself as a proud guardian of Latin America's musical legacy.

At first, Lafourcade's foray into tradition seemed like it would amount simply to an esoteric passion project. She dedicated a year in 2011 to recording the songs of Mexican composer Agustín Lara, the idiosyncratic figure with a complicated legacy as a literary mastermind and womanizing lothario, credited with adopting Cuba's bolero trend and weaving it tightly into fabric of other Central and South American cultures. The understated homage, called Mujer Divina, could have simply been a footnote in Lafourcade's biography — "she once made a tribute album" — but then Lafourcade followed it up with Hasta La Raiz, a glowing showcase of her own writing that, with its expressions of heartbreak and longing, had clearly been influenced by Lara's work.

In many ways, Hasta La Raiz is a precise embodiment of Lafourcade's ability to thread together old and new, and show the possibilities that open by indulging retrospection. What drives the album's tracks is evocative writing that feels distinctly personal while channeling the imagery and tenderness of balladeers from bygone eras. "I keep crossing rivers, walking through forests, loving the sun / Every day I continue to draw thorns out from the depths of my heart / In the night I set fire to my dreams / To cleanse every memory with sacred smoke," are the opening lines of album's title song, which nods to the pictorial lyricism of nueva cancion. The arrangements, meanwhile, are stripped back and shaved down to the bone, often dressed only in simple guitar melodies — sparser versions of Lafourcade's past work that felt almost rebellious compared to some of the more ornate pop and urban sensibilities of the late 2000s. The industry embraced this new terrain, bestowing several Latin Grammys upon Hasta La Raiz in 2015 and reinforcing the suggestion that maybe there was a way to cast redolent, vintage-leaning sounds into the future.

And then Lafourcade fell deeper into the past. She partnered with Miguel Peña and Juan Carlos Allende, the 70-plus-year-old members of the guitar duo Los Macorinos, known for working with the renowned Costa Rican-and-Mexican singer and lesbian symbol Chavela Vargas. Holed up in a woodsy studio, they began a meticulous study of Latin America's cultural trove that initially, Lafourcade said, hadn't been intended as a full-fledged release. "It wasn't in my plans to release a new album, but I had this desire to record with Los Macorinos and just make music for myself," she told Billboard.

Yet Lafourcade and Los Macorinos recorded more than 30 songs that formed a two-part compendium, Musas and Musas Vol. 2. Lafourcade had always leaned heavily on Mexican icons, but Musas includes careful dissections of what some would consider the most precious folk standards across Latin America. There are odes to the nueva cancion greats, including Parra and Yupanqui, as well interpretations of other widely celebrated traditions. Lafourcade bravely takes on "Duerme Negrito," a lullaby that originated from enslaved people on the Colombian-Venezuelan border, and "La Llorona," a song tied to the decades-old folk legend of a wailing woman. She also shines a spotlight on the women often overlooked in the shadow of male artists, paying homage to Argentina's Mercedes Sosa, Mexico's María Grever and Cuba's Margarita Lecuona.

It's one thing to churn out beautiful covers, but what heightens Lafourcade's work is an artful simplicity that transcends the bounds of time. Her voice, air-light and childlike, often feels as though it could have come to us from any era. Even her choice of quiet, ligneous guitars is a tribute to Latin America, acknowledging the sylvan landscapes and woodsy environments from which the instruments came, in the habit of previous folk artists. With Musas, she freed music that, for many younger listeners, had been trapped in amber and imbued it with new life.

Lafourcade's sound has come to us at a time during which the desire to examine Latinx roots has felt particularly urgent, perhaps as a result of challenges and political strains that both Latin America and immigrant communities in the U.S. have encountered in recent decades. The themes of ancestral roots and patrimony have been percolating in Latinx pop culture in recent years, coalescing into moments like the release of 2017's Disney blockbuster Coco. While the film focused largely on Mexican heritage, it won over wider Latin American audiences with its message of honoring familial roots. When the soundtrack surfaced, it surprised few people that Lafourcade was chosen to record the film's original song, "Remember Me," alongside R&B maverick Miguel, who is partially of Mexican heritage. A performance at the 2018 Oscars cemented her place as an indelible force in the mainstream and a custodian of traditions.

Remembering where you come from, and what the people before you have gone through, is an emotional exercise, often heavy with the weight of history. But as Latinx culture teaches, it can also be a way into limitless sources of tenacity, self-awareness and imagination. Even in the face of loss, it's the bits of memories, stories and songs that get passed along the generations to preserve the beauty of places that may no longer exist. Children of Latin American immigrants know this particularly well, perhaps having witnessed portals into past lives open through a fuzzy bolero playing on a grandfather's radio or through a family story repeated at a party like an incantation.

Lafourcade understands this alchemy, too, and her work is a testament to the creativity and the pride that unspools when one taps into tradition. In today's turbulent times, that sense of pride is more necessary than ever among Latinx communities, and Lafourcade's music is an invitation to plunge into the folds of collective memory and celebrate the cultural heirlooms we've inherited.