Accessibility links
European Leaders Demand Investigation Of Slain Bulgarian Journalist A suspect was briefly detained Tuesday, but was let go. Bulgarian officials have indicated Viktoria Marinova was not targeted for her work, and that no suspect or motive has been yet uncovered. 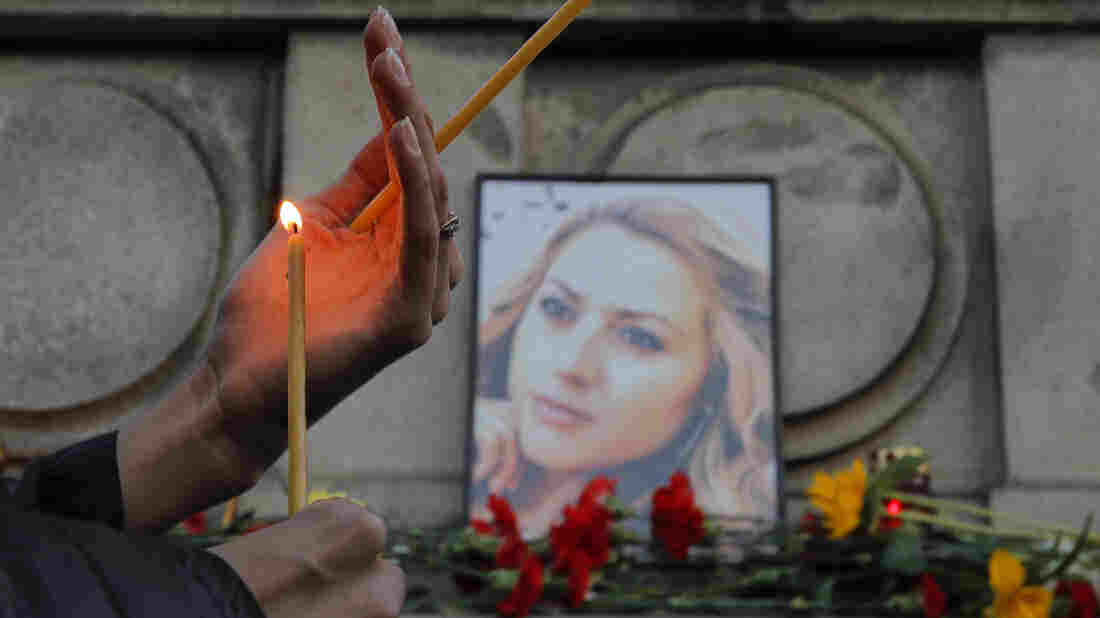 A woman holds a candle next to a portrait of slain journalist Viktoria Marinova during a vigil at the Monument of Liberty in Ruse, Bulgaria, on Monday. Vadim Ghirda/AP hide caption 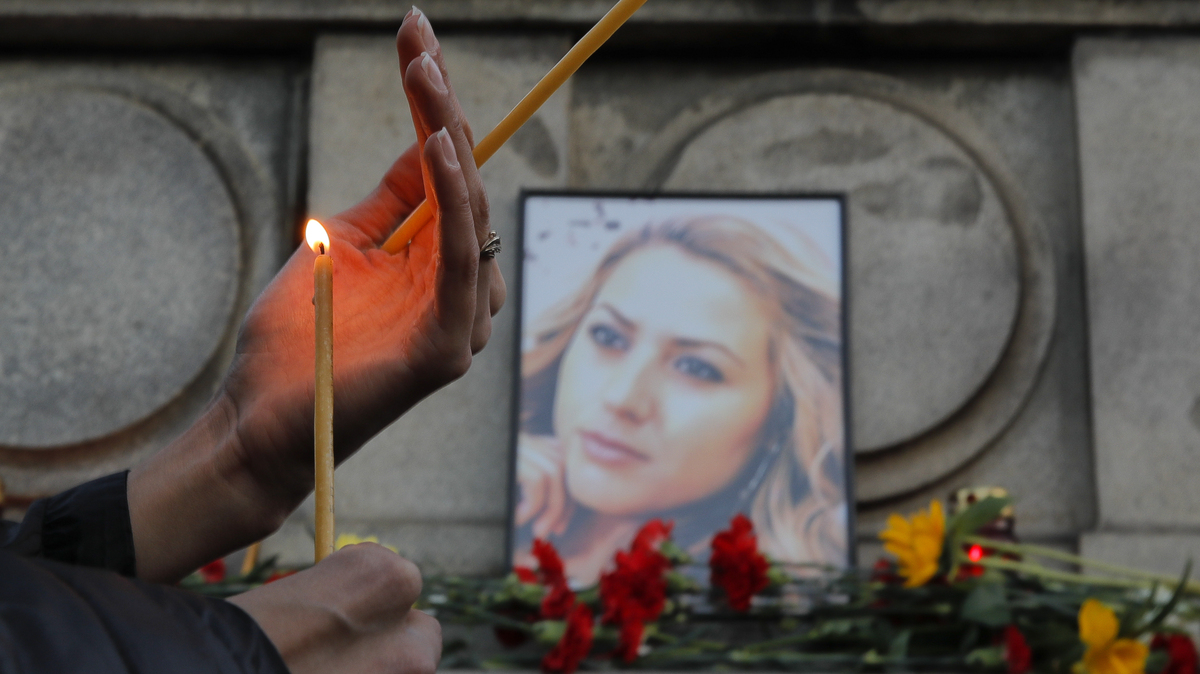 A woman holds a candle next to a portrait of slain journalist Viktoria Marinova during a vigil at the Monument of Liberty in Ruse, Bulgaria, on Monday.

A Romanian man was briefly detained on Tuesday in connection with Saturday's high-profile rape and killing of Bulgarian journalist Viktoria Marinova, but after questioning, a Bulgarian official said the unidentified man would be released without charge.

Marinova's beaten and strangled body was found in the bushes by the banks of the Danube River in the northern Bulgarian city of Ruse, police said.

But even as investigators worked to establish a motive and apprehend a suspect, competing narratives emerged about whether Marinova had been targeted for her journalism or whether she was the victim of a random crime.

The Bulgarian government has indicated Marinova's attack was not about her work.

"It is about rape and murder," Interior Minister Mladen Marinov said, according to The New York Times. And Prime Minister Boyko Borissov said Sunday that authorities were working together alongside the "best forensics" team to solve the murder.

The prosecutor general, Sotir Tsatsarov, said on Monday that while nothing was being ruled out, it was unlikely that Marinova's killing was connected to her work, reports the Times.

But others have suggested that the brutal killing of an anti-corruption show host in a country known for widespread corruption was perhaps more than a coincidence.

"Again a courageous journalist falls in the fight for truth and against corruption," said Frans Timmermans, vice president of the European Commission.

Shocked by the horrendous murder of Victoria Marinova. Again a courageous journalist falls in the fight for truth and against corruption. Those responsible should be brought to justice immediately by the Bulgarian authorities.

"In certain countries there is just not enough enforcement of the law," Robert Mahoney, deputy executive director of the Committee to Protect Journalists, told NPR. "And there is rampant impunity, which means that you can sometimes silence a critical journalist or close down an investigation by having that journalist killed."

Mahoney says that it is too early to say whether Marinova's killing falls into that category.

Marinova briefly hosted a show on Bulgarian station TVN, called Detector. The first episode aired on Sept. 30 and featured two investigative journalists looking into alleged fraud by businessmen and politicians involving EU funds, reports the BBC. The journalists, Attila Biro and Dimitar Stoyanov, had been detained in September for their work.

After her death, prosecutors opened an investigation into GP Group, the private Bulgarian building company that Biro and Stoyanov spotlighted in their report, according to The Associated Press.

Claude Moraes, chair of the European Parliament's Civil Liberties Justice and Home Affairs Committee, is asking Europol to stand ready to assist with the investigation into Marinova's death.

Written to #Europol director today asking her to stand ready for an investigation into the murder of journalist #VictoriaMarinova. The MS must act urgently but there are compelling reasons for a Joint Investigation Team if called upon pic.twitter.com/xvYBtxgQtP

"The shocking news about the murder of Victoria Marinova, an investigative journalist, seemingly linked to her reports on investigations into alleged corruption involving EU funds, urges us to take immediate action at all levels and with all legal means," Moraes wrote.

Through a U.N. spokesperson, Secretary-General António Guterres called on "all governments to strengthen press freedom and ensure there is accountability for crimes committed against journalists."

We are very concerned by recent cases of violence against journalists. Secretary-General @antonioguterres reiterates his call to all governments to strengthen press freedom and ensure there is accountability for crimes committed against journalists. pic.twitter.com/md7YIApW7l

Marinova is at least the third journalist killed in an EU country this year, after investigative journalists Jan Kuciak of Slovakia and Daphne Caruana Galizia of Malta also turned up dead.

Reporters Without Borders ranks Bulgaria last in the EU for press freedom.

"With oligarchs exercising a media monopoly and authorities suspected of corruption or organized crime links, journalists are exposed to many forms of pressure and intimidation when trying to perform their reporting duties in Bulgaria," says the press freedom advocacy group.

In a July report on the state of media freedom in Bulgaria, Reporters Without Borders said, "Fortunately, no investigative journalists have been killed in Bulgaria for their work, but there are documented murder plans and attempts, cruel, execution-style, beatings, car arson and bombs targeting investigative reporters."

In what would be her final show to air, Marinova addressed the constraints of practicing journalism in her country.

"The government and the corporate world pressure strongly the media owners and the media themselves," Marinova said, according to a translation by Bulgarian investigative news site Bivol.

"Investigative journalists are being systematically removed," she said.