Accessibility links
Instrument-Makers Learn A Long-Overdue Lesson: It Isn't Just Men Playing Guitar As outdated assumptions about the market for instruments come to light, some guitar-makers finally are starting to recognize that players come in all shapes, sizes and genders. 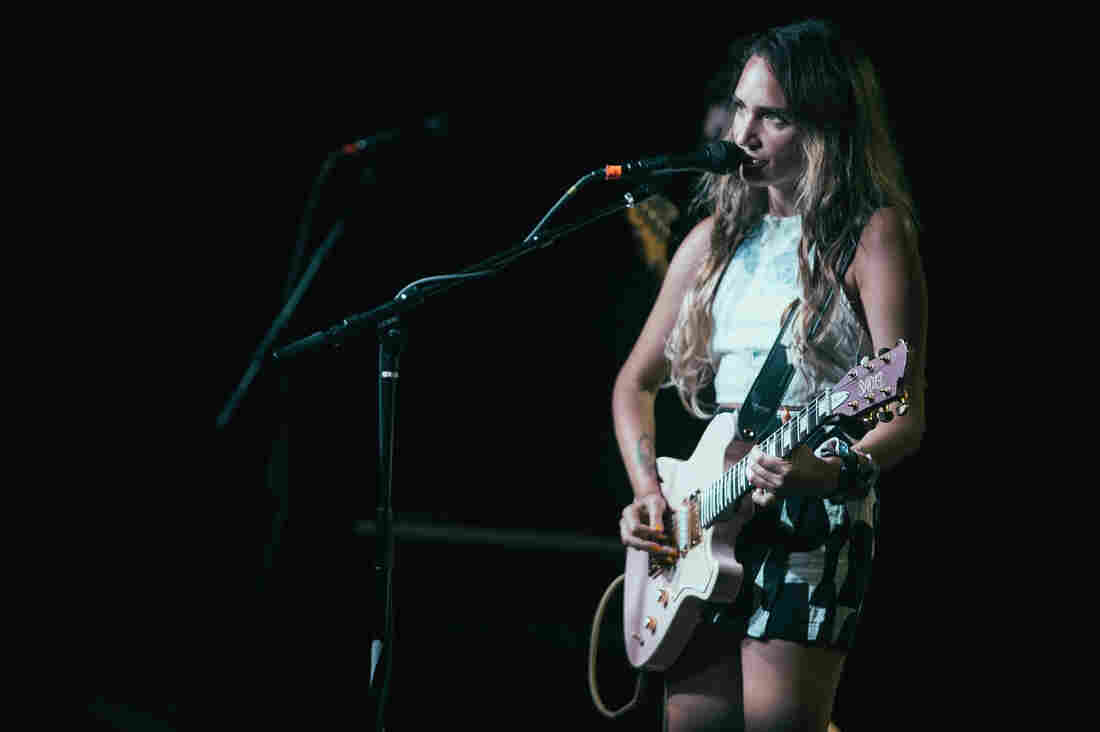 Sadie Dupuis of Speedy Ortiz performs in Alabama. As outdated assumptions about the market for instruments come to light, some guitar-makers finally are starting to recognize that players come in all shapes, sizes and genders. David A. Smith/Getty Images hide caption 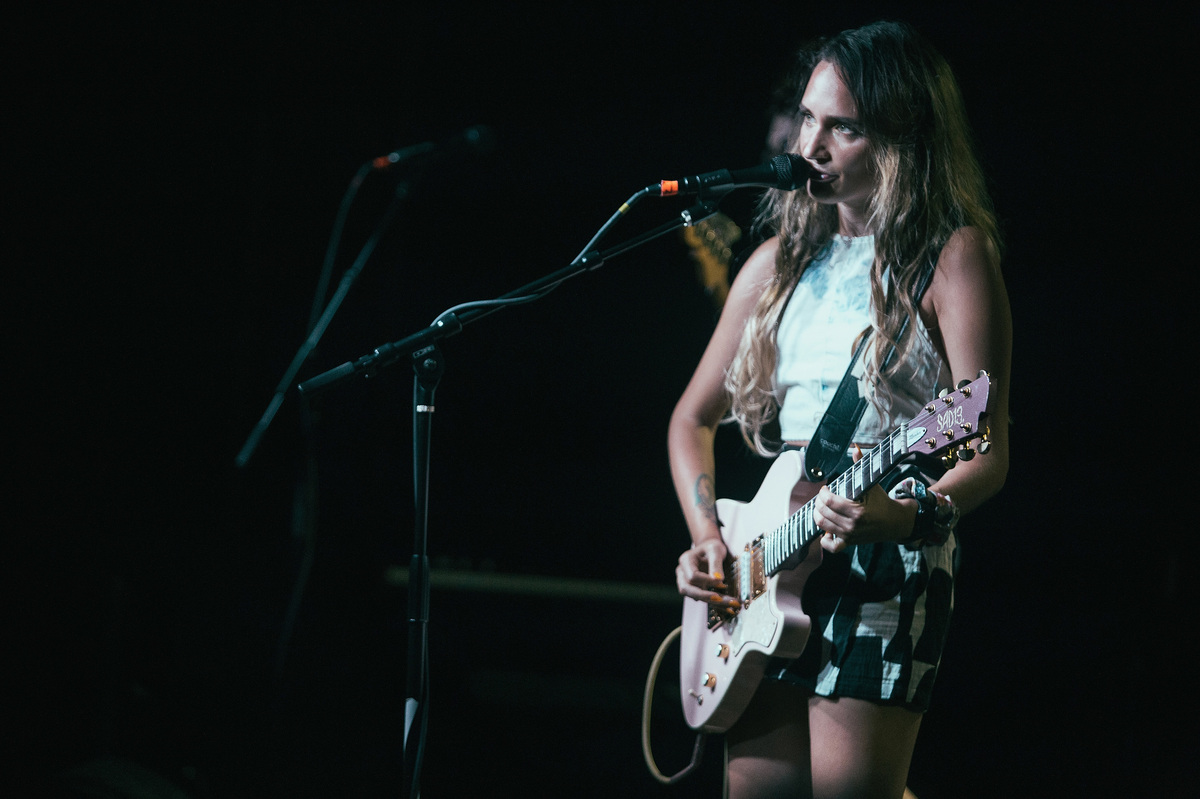 Sadie Dupuis of Speedy Ortiz performs in Alabama. As outdated assumptions about the market for instruments come to light, some guitar-makers finally are starting to recognize that players come in all shapes, sizes and genders.

When Sadie Dupuis, the lead singer and songwriter of Speedy Ortiz, started playing guitar in her early teens, she didn't think of herself as a female guitarist — at least at first.

"I knew that I was the only girl in my high school who played. But it wasn't until I started touring as an adult and seeing how few women were on bills that it started to really matter to me that I was a woman who could play technically challenging parts," Dupuis says.

Guitar sales have declined a bit over the past decade. The nation's largest instrument retailer, Guitar Center, is facing more than $1 billion in debt; Gibson filed for bankruptcy earlier this year; and Fender, which is privately held, has debt estimated at $100 million. But, Fender CEO Andy Mooney says, some of that drop may have to do with marketing — and outdated assumptions about to whom the industry is selling. When the company conducted a consumer survey in 2015, it learned that women make up half of first-time guitar buyers.

"There was probably a misconception in the industry that everybody who bought a guitar for the first time wanted to be a long-haired [rock] god," Mooney says. "That's a very small percentage of the total universe, less than 10 percent."

In the 19th century, women often performed parlor music on small, gut-stringed guitars. In the 20th century, more and more took to the concert stage: classical guitarists Luise Walker and Ida Presti, electric jazz guitarist Mary Osborne and rock pioneer Sister Rosetta Tharpe, to name a few trailblazers. Still, women playing guitar have long had to deal with diminished expectations: often seen as novelties, or not seen at all. When Tish Ciravolo bought her first bass guitar in the mid-1980s, the salesman was only interested in talking with her boyfriend.

"We walk in and the guy behind the counter — that's the sales guy — and my boyfriend have a conversation about how I want to learn how to play bass and what bass would be really good for me," she says. "So they decide what bass I should buy."

When Ciravolo's band was invited to perform at a Los Angeles radio station, it wasn't exactly the break she was hoping for: "The Battle of the Bitches" pitted four all-female bands against each other to see who would win the top prize at the end of the night. Nevertheless, Ciravolo remained dedicated to the instrument.

One day, her young daughter drew a picture of a daisy. Ciravolo saw a guitar for girls and decided to launch Daisy Rock, a company specializing in smaller, lighter guitars with a visual style meant to appeal to young women.

In 2001, she took a few of her instruments to the National Association Of Music Merchants' annual trade show. "I was on the NAMM floor, in a sea of black guitars, showing a cute, pink daisy," she says. "A thousand people in four days came by and said, 'That will never work. Girls don't come into music stores.' "

But they did. They saw Miley Cyrus play a Daisy Rock on Hannah Montana; Taylor Swift and Avril Lavigne played Daisy Rocks, too. Ciravolo expanded her line, eventually selling more than half a million guitars to date.

Others tried to follow suit, but the marketing was still behind the times in many cases: Ads in magazines such as Guitar World rarely showed women actually playing guitars. "When I was 13, I would go to the music magazine section, and the covers were always these naked or bikini-wearing models — not players," guitarist Fabi Reyna says.

Five years ago, Reyna founded a DIY magazine called She Shreds. In 2016, her readers successfully campaigned Guitar World to stop using bikini models in its "gear guide" issues. She Shreds' circulation has since grown to 40,000, with close to half of its readers identifying as male.

"She Shreds has existed simply because we have promoted visibility," Reyna says. "We are for women, but we're about women, for everybody."

That change in attitude is reflected in Fender's survey data, which indicates that first-time players are diverse with respect to gender and genre. Mooney says they also don't need the guy behind the counter at the music store as much anymore, estimating that about 50 percent of the total units sold in North America are consumer direct in some shape or form. To reach potential customers online, Fender has grown its social network and invested heavily in digital ads, like one featuring the all-female band Warpaint.

But the future of guitar rock isn't dependent on sales alone. Sadie Dupuis says she doesn't reject the "female guitarist" label. Instead, she seeks to transform it into a positive.

"I really try to make my stage presentation 'princess feminine,' " she says, "because I do think that even when people who aren't men get interested in rock music, sometimes they only see masculine presentation as the way you're allowed in."

While the industry, and society, catch up, it's important to show fans that guitars and rock are for everyone.