Accessibility links
Coming To The Right Answer By Themselves: Talking With Boys About Sexual Assault How do we discuss sexual assault and consent with teenage boys? A Jewish organization based near Philadelphia has developed a program to discuss difficult topics such as this in an all-male setting.

Listen · 4:01 4:01
Coming To The Right Answer By Themselves: Talking With Boys About Sexual Assault 4:01 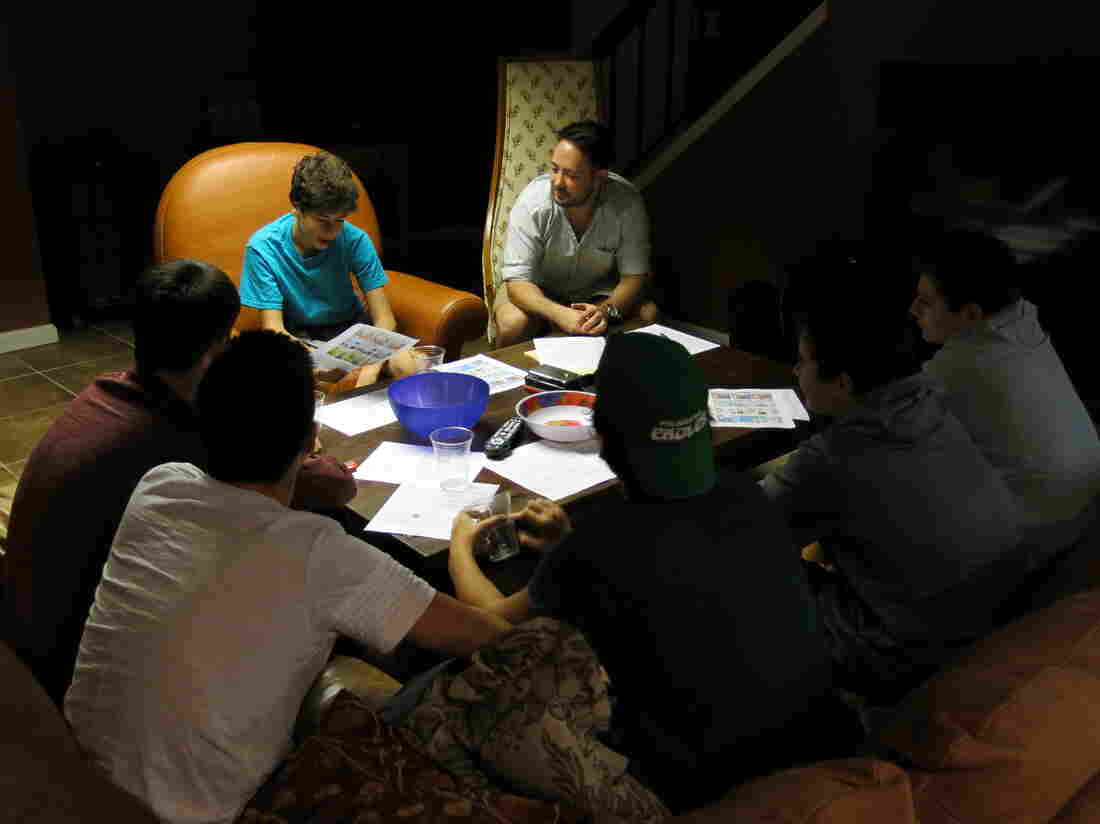 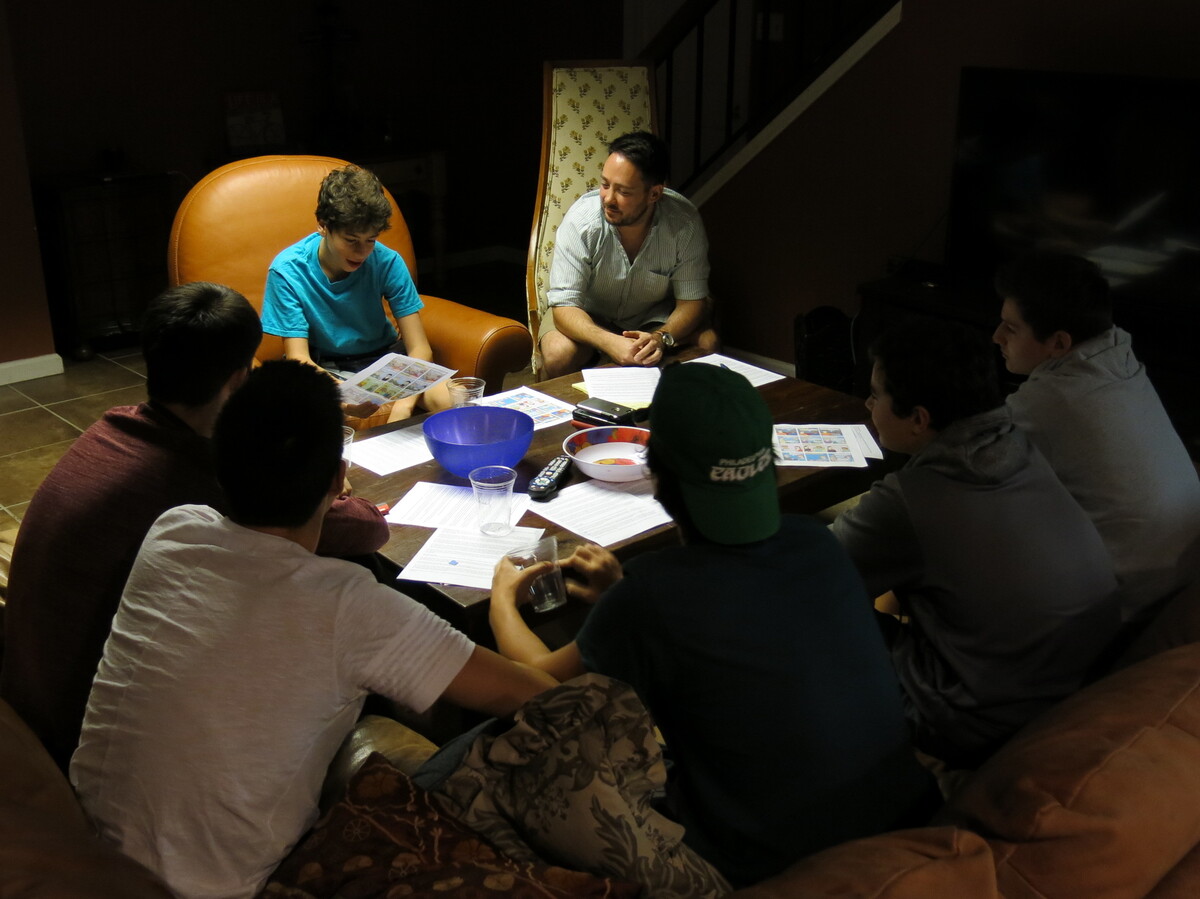 Cody Greenes (center), group leader with Moving Traditions, leads six high school boys in a discussion about sexual assault and consent. The program was designed to discuss difficult topics in an all-male setting.

In the basement of a suburban Philadelphia home, half a dozen high school freshman boys recently met to munch on chips and pretzels — and to talk about sexual assault in the wake of the Brett Kavanaugh confirmation hearings.

A Jewish group called Moving Traditions brought them together as part of its programs to encourage teenagers to talk about this and other difficult issues. Temple Sinai in Dresher, Pa., sponsors this local group.

Volunteer group leader Cody Greenes, 35, introduced the week's topic by asking the boys to raise their hands if they've heard of the #MeToo movement. Then Greenes led a discussion about the historical power differences between men and women and how that can play out when it comes to sex.

After talking about the larger issue, Greenes posed the question: "Do we believe that verbal consent is necessary?"

Most of the boys said yes, but one, David Levin, argued it isn't always simple. He described a situation on a bus where both people already said they're interested in each other and the girl purposely sat next to the boy.

"And then she, like, puts a blanket around you two and lays down, and cuddles into you and grabs your hand so you can hold hands and stuff," says Levin, who suggested those are signs of consent.

Complicating the discussion, the boys talked about a case where verbal consent may not be enough — say, if a movie producer asks a subordinate to have sex.

Arriving at the right answer on your own

Moving Traditions founder and CEO Deborah Meyer says the goal is not to tell teens how they should behave, but to give them the space and guidance to arrive at the right answer with their peers.

"We help guys uncover the tenderness and the connection and the joy in themselves, as a human being, and develop for themselves a sense of ethics and values and responsibility," Meyer says.

Talking about sexual assault and consent this way sounds different from what a lot of people heard in the past, often during presentations for incoming college freshmen.

"We gave females rape whistles and mace and we told them to be careful when they went out and not to be raped. And then we would sit down and talk to men and tell them not to be rapists," says Sharyn Potter, a professor of sociology at the University of New Hampshire.

Bringing in the bystanders

Potter says research shows that only a small percentage of men are perpetrators, so it doesn't make sense to frame this as a men vs. women problem. Instead, she focuses on educating the community with a "bystander intervention strategy."

"We teach people to be aware of these situations, and then we give people the skills to intervene in these situations before, during and after," says Potter, who also co-directs the Prevention Innovations Research Center at UNH.

Potter says it can be difficult to encourage people to intervene because they're often concerned about being seen as a "killjoy" or "party pooper." She says what's needed is cultural change, like what happened with the movement to end drunken driving.

Decades back, most people were uncomfortable taking a friend's keys when they were too drunk to drive. But after years of research and education campaigns, the rate of alcohol-related traffic deaths has been cut in half since the 1980s.

Potter says for sexual assault, this kind of culture change is just getting started. But there are examples.

One of the teenagers from the Moving Traditions group, Matthew O'Donnell, says he already has used these skills as a high school freshman. At a football game, he says another guy was touching a girl and trying to get her to be intimate. He wasn't sure if it was a problem, but just in case he made an excuse to separate them.

"When I saw it happening I was just kind of like, 'Oh, I have to go to the bathroom.' And the bathroom was on the other side of the stadium," O'Donnell says. He says he asked the guy to come with him, and the potential problem was averted.

Potter says that's a perfect example of identifying a situation and then intervening in a way that doesn't make a big fuss. She says more of that, along with praise for people like O'Donnell when they intervene, will lead to the culture change that could result in fewer sexual assaults in the future.