Accessibility links
Chazelle's 'First Man' Chronicles Personal Losses Behind Armstrong's 'Giant Leap' Director Damien Chazelle says his new film, which examines the years leading up to Neil Armstrong's monumental first step on the moon, is a story of "dreams — and the cost of pursuing those dreams." 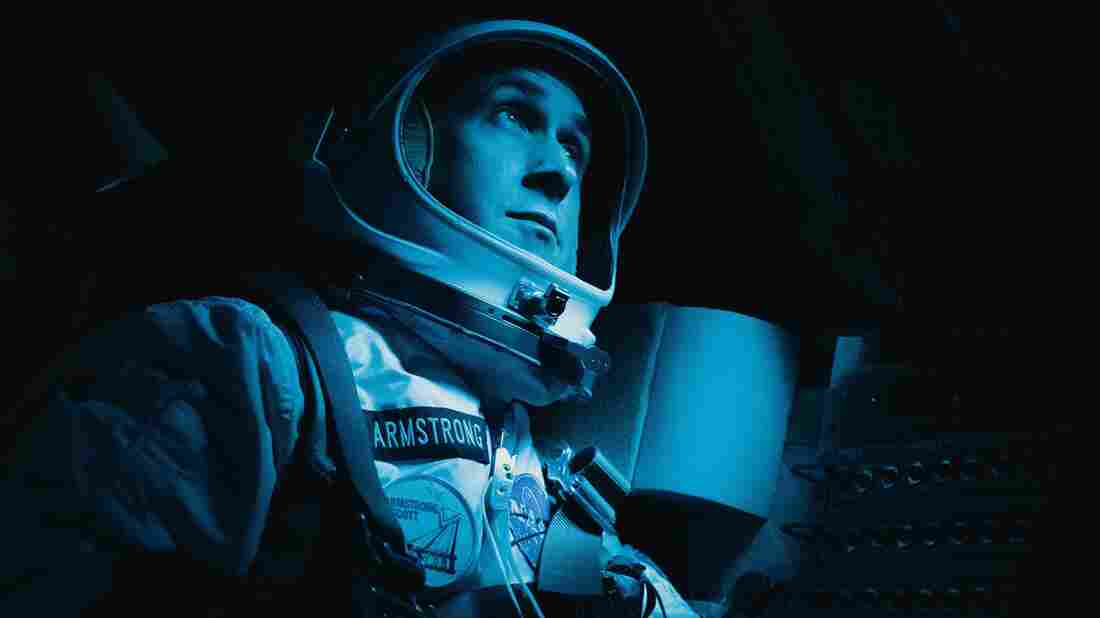 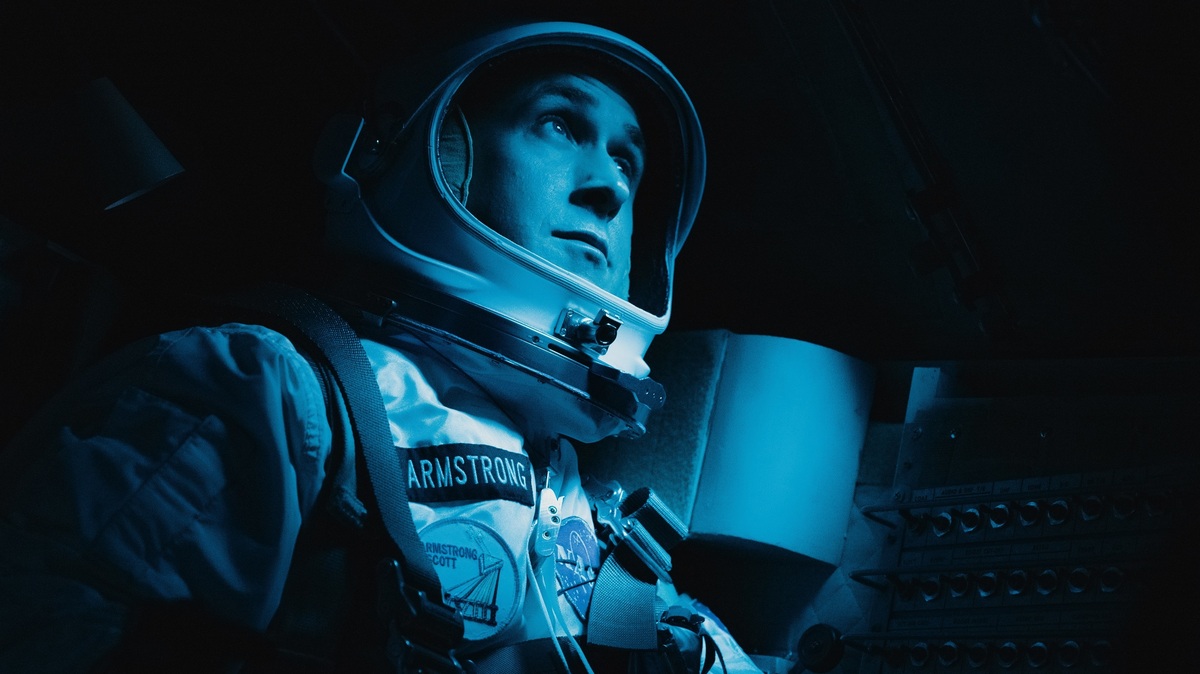 Chazelle, whose previous films include La La Land and Whiplash, describes Armstrong's story as one of "dreams — and the cost of pursuing those dreams." He notes that in the years leading up to the moon landing, Armstrong and his wife had dealt with the death of their young daughter, as well as the loss of several friends who had died in the space program.

'First Man' Considers Glory, Grief And A Famous Walk On The Moon

"The more I learned about Neil, the more I saw this story as a story about coping and about grief and about how to get over — or how impossible it is to get over — certain kinds of losses and certain kinds of emotions," Chazelle says. "Here's a guy who didn't emote overtly very much, but in many ways, I think it was those feelings that he tried to tuck underneath that drove him to the moon."

It's astonishing enough that human beings have ever walked on the moon, but that they did it over 50 years ago with the technology that they had. These capsules were not really reassuring to look at when you're about to get into them. They're tiny. They're rickety. They ... are totally kind of analog. Often they feel more like extensions of the Machine Age than the Space Age. They feel like things that you would expect out of a World War II submarine or tank movie, and very much the opposite of how at least my generation grew up thinking about space travel, which was high-tech. ... Really, this was a time where we were being thrust into the future before the future arrived, and I just find that fascinating. You have a group of people literally making it up as they go along, figuring out how to get there.

On portraying the Gemini 8 mission, when Armstrong successfully docked two vehicles in space but then almost died when there was a system failure

I think what was interesting about the Gemini 8 mission was, on the one hand, you have this incredible accomplishment of two vehicles docking in space — without that accomplishment, the moon landing would not have been possible. So it was a necessary step, and it was the first step that America ever beat the Russians to in the entire history of the space program. The Russians had beat America on every single other juncture beforehand.

Neil Armstrong, First Man To Walk On The Moon, Dies

So you have everyone feeling like royalty — as they should — and right away, almost like a trick of fate, this problem ... began. And it's not just that it was this immediately life-threatening issue, but also the confusion of it. So keeping the camera inside the capsule as much as possible, not cutting out to big, wide shots that would overly explain things, trying to really be subjective and immersive to what Neil himself and his colleague Dave Scott would be experiencing, I think that was really important to us. And again, I think, just trying to [portray] ... how close to death these guys got. ...

Neil Whosis? What You Don't Know About The 1969 Moon Landing

That was just one of many instances of, I guess, what I would qualify as near-failures or, in certain cases, failures that led the way to the success story of the moon landing. So, I think [I'm] trying to remind audiences how fragile this all was, how dangerous, the lives it almost cost — and in some cases the lives it did cost. I think it helps us appreciate maybe just how hard-earned that final moonwalk really was.

We tried to shoot it in a way where we and the actors could be experiencing some version of it. So instead of using green screen or kind of relying on digital effects to paint the picture, we used full-scale replicas of these capsules. They were exactly the same size, and all the details were exactly the same.

Our production designer, Nathan Crowley, did an incredible job rebuilding these things and we would mount them on motion-control systems, gimbals, that would move and rock back and forth quite violently if we needed them to. And we would set those up against giant LED screens, so it was kind of like being in a simulator ride. You sort of sit inside them and you can't see off the set, you look out the window, you see space imagery instead of film equipment or crew or a green screen that we'll fill in later. You see the Earth spinning by over and over again. ...

Our [cinematographer] had a big light that was on a crane that would rotate around the capsule, simulating the sun. ... The hope was if we can feel it on set, if the camera is immediately getting a sense of the visceral reality and we're not having to rely on digital post-production effects to give that sense, then the audience is going to feel it. The actors are going to be that much more in it. The sweat you see on screen will be real. The shaking will be real. Even some of the terror will be real. The nausea will be real. And, by extension, the audience will really feel that they themselves are in that capsule, too.

On the sound design in space scenes, which includes alarms, banging and mechanical sounds

You can play with the silence of space itself, that kind of soul-sucking void that is space, in juxtaposition with just the crazy noise-making machinery that these capsules were. ... This is creaking machinery making its way up there. So something like the spin sequence ... we wanted to kind of hit at an emotional reality for that in the sense that we would augment the sounds you would actually hear with sounds that would hopefully help the audience really immerse themselves in the experience. ...

Trying to continually remind audiences, whether it's just with subtle things like little creaks, little groans and moans of the hardware to much louder things, like things going really haywire, to whenever possible remind them this is a piece-by-piece, hand-built, machine.

On re-creating the historical footage of the lunar landing

We tried to set it all up according to the archival footage, according to every bit of evidence that we could collect. And we shot it out in a giant rock quarry at night with a giant light simulating the sun and we sculpted this quarry to look like the lunar surface. We had Ryan [Gosling] coming down a full-scale replica of the LEM [lunar excursion module] and we were playing the [recorded communications] into Ryan's earpiece so he could kind of listen along. And then we would take out Neil's passage so that Ryan could insert himself as Neil into those [communications]. So we were just trying to match the pacing, the cadences, the pauses, the silences, the rhythm, the look of everything. ...

The controversy about the flag material in the movie is pretty much exclusively among people who hadn't seen the film. ... The moon landing was an American achievement and an incredible one — and the flag on the moon was a very important part of that, which is why we show it — we show it several times — the flag standing there on the moon, on the lunar surface.

In terms of actually mapping out each beat of the mission and showing the physical sticking of the rod into the lunar soil and propping up of the flag, we made a choice, entirely an aesthetic choice, not a political one, to focus on Neil's private moments on the moon during that time.

The movie is about the 10 years leading up to the lunar landing. And so we only spend about eight minutes on the lunar surface. We really wanted to spend that time to look at things that people didn't see, things people didn't know about. So what he himself would be seeing as he first emerged from the lunar module before the camera had even gone down, and then after his famous line, his unplanned walk off to the Little West crater during which point he spent time alone, away from any cameras. So that's a part of the moon walk that no one really knows about.