Accessibility links
Review: 'Dancing Queen' Works Best When It Focuses On Its Queen, Not Dancing The Netflix reality series follows drag queen Alyssa Edwards (and her alter ego, Justin Johnson) through her/his offstage life as a dance instructor in Texas. 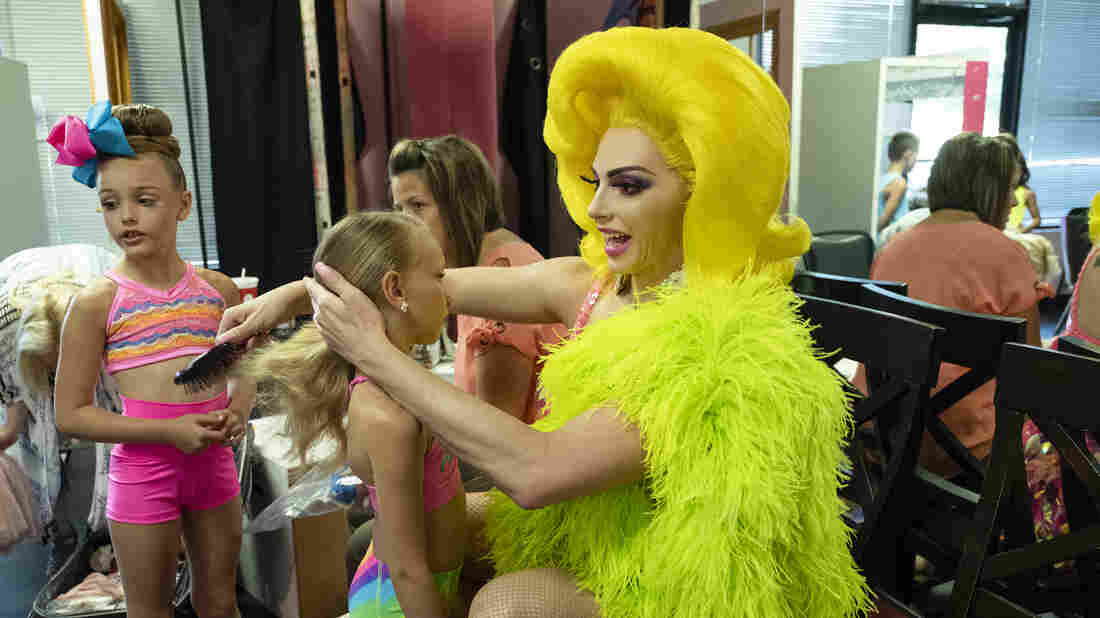 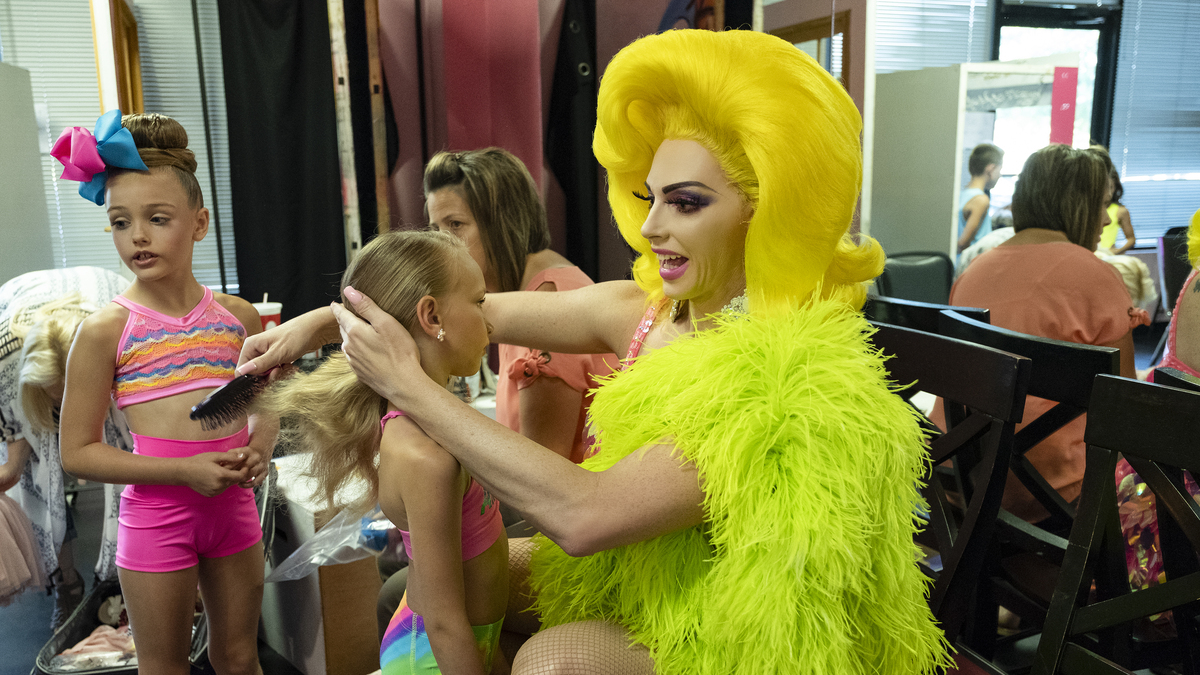 A big bird and her chicks: Alyssa Edwards teaches dance in Mesquite, Texas, in the reality series Dancing Queen.

She has to be; she's a drag queen. Being a lot comes with the lace-front wig. A drag queen who isn't a lot is no drag queen at all; she's food without flavor, art without color, Cher without Auto-tune. It's the difference, more specifically, between a fierce and fabulous queen like RuPaul and that one jock in high school who slapped on a Halloween store wig and stuffed himself into his girlfriend's cheerleading outfit for school spirit day.

Because drag is not the wig, the dress or the makeup. Drag is performance. It's commitment.

Alyssa competed, and committed, in Season 5 of RuPaul's Drag Race, where she distinguished herself by the force of her personality, her languid, Southern-fried vowels ("BaAAAack rollllllls?") and her dancing. She joined the pantheon of Drag Race royalty a few years later when she returned for All-Stars 2, got eliminated, came back, became 50% of the single greatest Lip-Sync For Your Life performance in the show's history, and later got eliminated again.

She's had a Web series, she tours the world, she's released a single (and if you thought a reality show about her wouldn't prominently feature said single, your pop culture literacy could use a refresher), and a couple weeks back she got a shoutout on Final Jeopardy.

She's a lot. The Netflix reality series Dancing Queen, which follows Alyssa/Justin through her/his offstage life running a dance studio in Mesquite, Texas, is at its best when it's illuminating precisely how all of [waves arm in a big circle] that manages to fit into a relatively prosaic suburban existence.

Throughout the 8-episode season, whenever we're watching Justin go about his days, we keep wondering, and occasionally worrying, about how his arched eyebrows, his bedazzled, rainbow-colored couture and his general baseline fabulousness will be received by the denizens of Mesquite. (To underscore this tension, the producers eagerly play into viewers' preconceived notions about that particular part of the country, if the sheer number of glamour shots of cows, abandoned BBQ joints, old windmills and backlit Texas flags is anything to go by.)

Happily enough, though, the locals love the guy. Which makes sense — it's his hometown, and he's plugged into a support system that we get to see from several angles. When he buys a house in the suburbs, for example, his real estate agents throw out a few "YAAAAS queen!"s in the process. We meet his friends, which include the gay couple who design his gowns. He and fellow queen Laganja Estranja stop by the local wig store; the employees chuckle lovingly as the two stomp up and down the runway (its aisles).

Those who believe drag is all about drama may be surprised by how interesting it turns out to be to watch a queen out of the wig, out of makeup, out of the gown, just tending to life stuff that's inherently drama-free. He goes on a subpar date with a shy guy! He throws parties in his gated community! He worries about making too much noise for the neighbors! He gets mad at Party City when some balloons arrive deflated!

The show also throws in a few stock gambits to tug at the heartstrings: He stops by the house where he grew up and visits his mother's grave, because this is a reality show, and there are rules. There are tearful reunions with estranged family members; see above.

And there are, of course, naked attempts to appeal to fans of RuPaul's Drag Race (each episode features a brief, highly produced music video segment in which Alyssa lip-syncs in her inimitable style).

We get confessionals, in which either Alyssa or Justin address the camera to comment on the events we're watching unfold. There's an attempt, in early episodes, to set up a kind of split-personality dynamic whereby Alyssa remonstrates Justin for not being fierce and fabulous enough — Dr. Jekyll and Ms. Hiiiiiiiiiiiiiiiiiiii-de, as it were — but that thread gets dropped, sadly.

Everything I've described above, like Alyssa herself, is a lot. The problem is, all of [waves arm in wide circle] that? Is only half the show.

The other half is, essentially, Dance Moms.

On paper it makes sense. If we're following Justin through his day to see how he navigates the real world, we need to see him at his day job, right?

Right — but when said day job involves coaching toddlers, tweens and teens through group numbers and solos, pruning the rosters down to "elite" teams for competition, and putting up with an unceasing stream of complaints and protestations from a disgruntled fleet of Sikorsky-helicopter moms ... well.

Look, the kids are cute, and they seem to love dancing and Justin. For fans of shows like Dance Moms and Toddlers and Tiaras, that'll probably be enough. But for the dancing half of the show to work as it's intended to — for it to truly inform and enrich our understanding of Justin and his work — we'd need to get a clearer sense of either the transformative joy that drives these kids or a more technical understanding of their dancing's aesthetics. What we get instead are moms huffing about Justin's favoritism and unremarkable, un-remarked-upon footage of various dance competitions. Alyssa and Justin both talk about their love of "snatchin' them trophies," and that turns out to be the show's narrow, singular focus as well. No real effort is expended in elucidating how and why any given dancer excels or fails; we're merely told that they do. Without that technical grounding, the judges' decisions, when they come, feel mysterious and completely untethered to anything we've seen onscreen.

While there's considerable fun to be had in watching Alyssa bask in the spotlight of her confessionals — she positively luxuriates in them and cannot seem to stop posing, even for a minute — Justin's addresses to the camera prove less compelling. This is because they're usually tied to his role as dance coach, and thus consist of empty Successory-poster platitudes like "Teamwork makes the dream work," which is to this show what "Winter is coming" is to Game of Thrones.

Alyssa is a star, and Justin seems to prize and truly appreciate his status as a role model. He tells us, often, that his life is a "dream come true," and you have to be happy that he's found his calling. But in the end, Dancing Queen doesn't do enough to bring us along with him. And that's a drag.