Accessibility links
Kanye West At The White House: A Scene Trump Called 'Quite Something' During a meeting at the White House, Kanye West spoke for 10 minutes on a range of topics. His stream-of-consciousness remarks left President Trump saying, "That was pretty impressive." 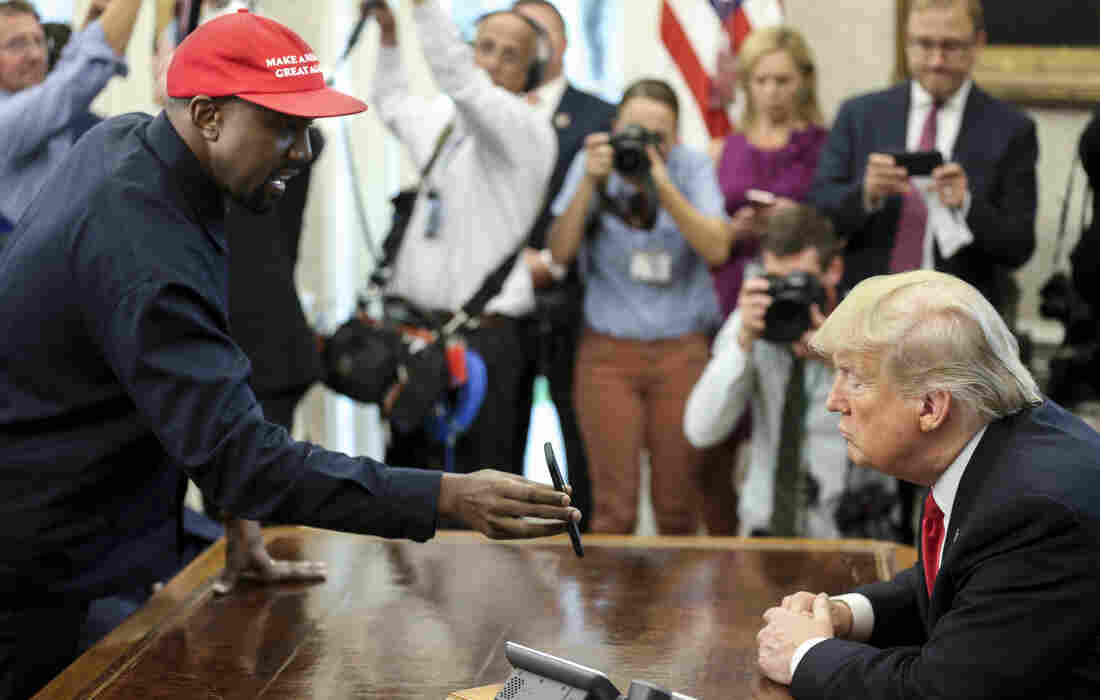 Rapper Kanye West shows a picture of a plane on a phone to President Trump during a meeting in the Oval Office on Thursday. Getty Images hide caption 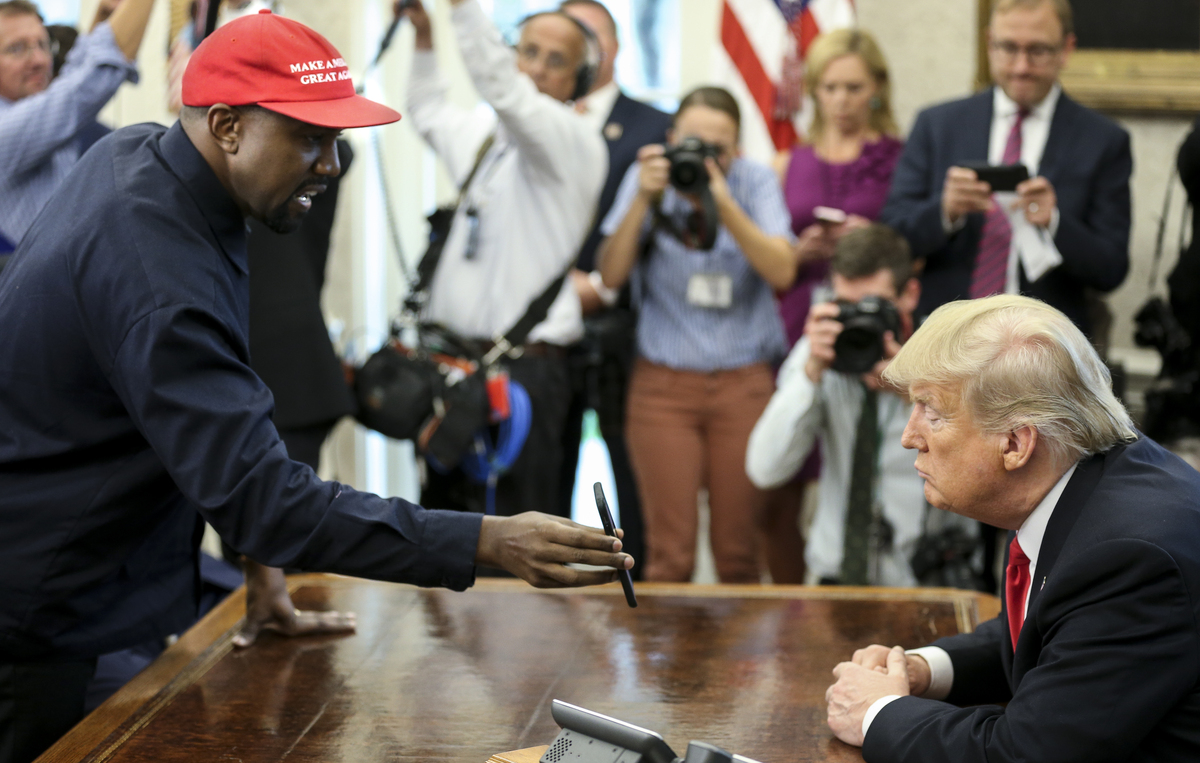 Rapper Kanye West shows a picture of a plane on a phone to President Trump during a meeting in the Oval Office on Thursday.

During a meeting with President Trump, Kanye West delivered animated and wide-ranging remarks on issues from the 13th Amendment to U.S. manufacturing.

West said he loved everyone — including Trump's former presidential rival, Hillary Clinton — but he said he could relate to Trump's "male energy."

"It was something about when I put this hat on, it made me feel like Superman," West said. "You made a Superman cape for me, also, as someone who looks up to you ... looks up to American industry guys."

West touched on many, many other issues as well, including his own mental health. He said he had been diagnosed with bipolar disorder, but that "a neuropsychologist who works with athletes from the NBA and NFL" told him that he simply had sleep deprivation, "which could cause dementia 10 to 20 years from now."

West said that when he tells liberals that he likes Trump, they tell him, "Oh, but he's racist." His voice rising, West said, "You think racism can control me? That don't stop me, that's an invisible wall."

The New Kanye Reaffirms His Love For President Trump On 'SNL'

He told a reporter at the photo op that he doesn't answer questions "in simple soundbites," saying, "You are tasting a fine wine — it has multiple notes to it."

One of the subjects he said he was planning to discuss with the president is sentencing reform, saying stop and frisk "does not help relationships" in his home city of Chicago. Trump, who has called for police in the city to adopt the controversial practice, then said he is "open-minded" on the issue.

Trump was asked whether he thought West could be a future presidential candidate, and responded "could very well be."

West then said, "Let's stop worrying about the future, all we really have is today."

He said Trump is "on a hero's journey right now, and he might not have expected to have a crazy motherf***** like Kanye West" support him.

After West finished speaking, Trump, who is known for his own stream-of consciousness speaking style, said, "I tell you what — that was pretty impressive."

"That was quite something," Trump added.

West was joined in the Oval Office by legendary football player and activist Jim Brown.

The two men were at the White House for a working lunch with Trump that was supposed to be focused on clemency, crime in Chicago and economic investment in urban areas.

Kushner has taken the lead in pushing a White House initiative to better prepare prisoners to re-enter society.

Both Brown and West have been vocal supporters of the president. Trump has returned the favor by praising the two men on Twitter and at campaign rallies.

Trump, who has had low approval ratings from African-Americans, often links the support of West and Brown to his administration's relationship with the black community. He argues the two men back him because of low black unemployment and other economic gains that have happened on his watch.

He told Fox News on Thursday that he believes West has boosted his standing with African-Americans, although he offered no evidence.

"I have a lot of African-American support and a lot has developed over the last little while with Kanye coming out and Jim Brown's been there for a long time," Trump said.

West is not the first member of his family to meet with Trump. His wife, reality TV star Kim Kardashian West, has worked with the White House on criminal justice reform and clemency issues.

She visited the White House in May seeking clemency for Alice Marie Johnson, who was serving a life sentence in federal prison for a first-time drug offense. Shortly after the visit, Trump commuted Johnson's sentence.