Accessibility links
No Longer Daily, White House Press Briefings Fade As Trump Does The Talking The briefings, which were must-see TV early on in the Trump administration, are now shorter and less frequent. But reporters are getting more chances to ask the president questions directly. 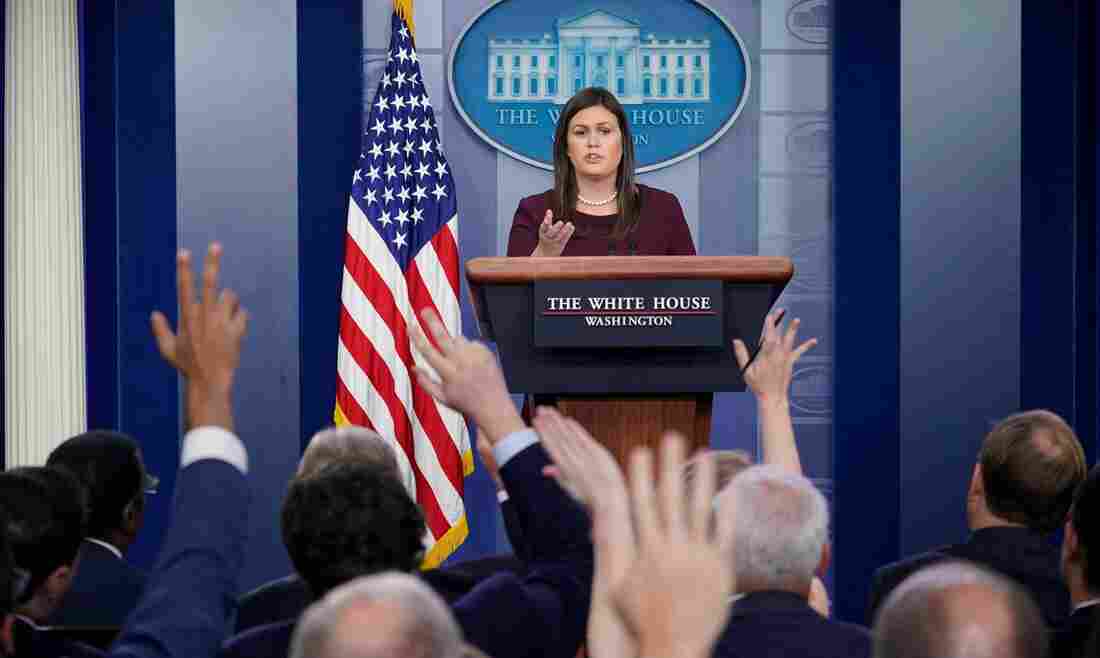 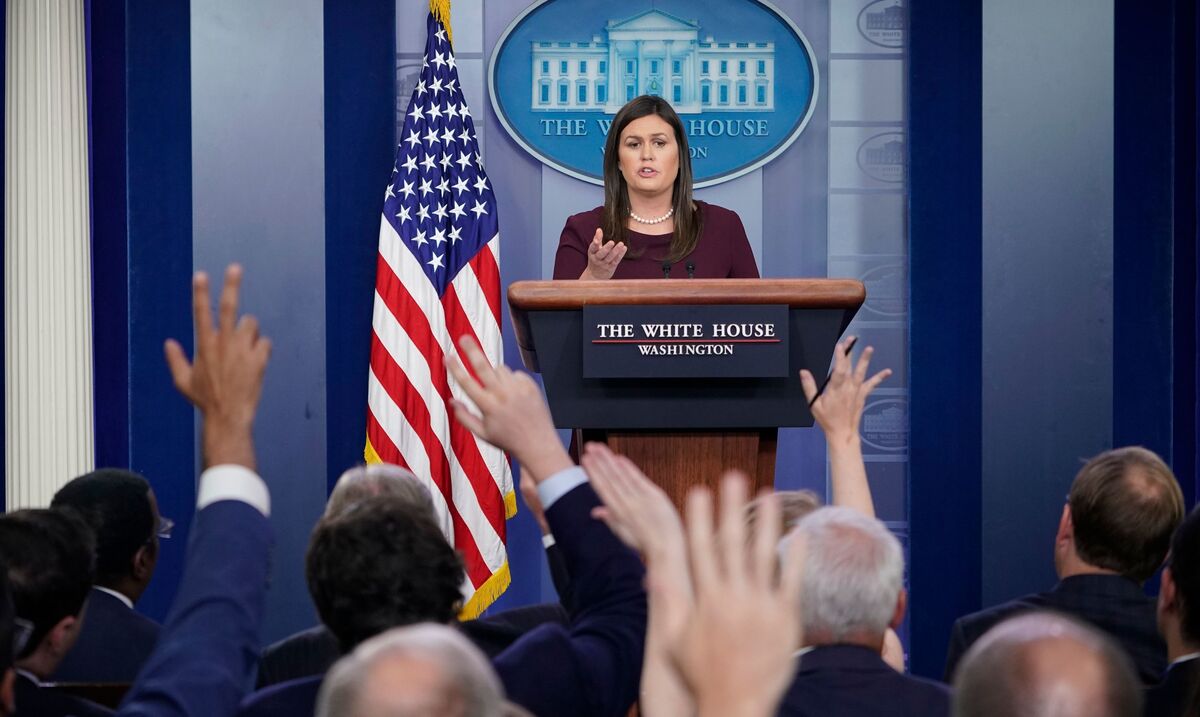 Press secretary Sarah Sanders last walked up to the lectern in the White House press briefing room on Oct. 3 after a 23-day drought. Before that, there had been an 18-day stretch with no briefing.

Early in the Trump administration, the regular White House press briefings were must-see TV, getting big ratings for the sparring between press secretary and press. In recent months, though, the briefings have shrunk away to the point at which calling them "daily" would be a severe misnomer.

"It's an important forum for the public, and we shouldn't let it go," says Martha Joynt Kumar, director of the White House Transition Project and a political scientist who has sat in on the White House briefings for years.

The number of briefings began declining in the spring, falling below levels of the last two administrations at the same point in their terms. It dropped precipitously in the past two months.

Meanwhile, in recent days, President Trump has been speaking for himself — a lot. For instance on Thursday, he took questions from reporters at two bill signings and held court in the Oval Office with rapper Kanye West as members of the press pool tossed out questions.

Twice in the past week, Trump has brought reporters to the front of Air Force One to chat and answer questions, and he has called into Fox News three times. These exchanges haven't involved in-depth discussions of policy. Rather, they've been heavy on politics and breezy commentary on news of the day.

Kumar, who tracks presidential interactions with the press, says if you combine press conferences and these more incidental interactions, Trump has personally taken questions more frequently than former Presidents Barack Obama, George W. Bush and George H. W. Bush at the same point in their presidencies (Bill Clinton has Trump beat, however). In less than 10 months in 2018, Trump has already surpassed his total from 2017, she says. 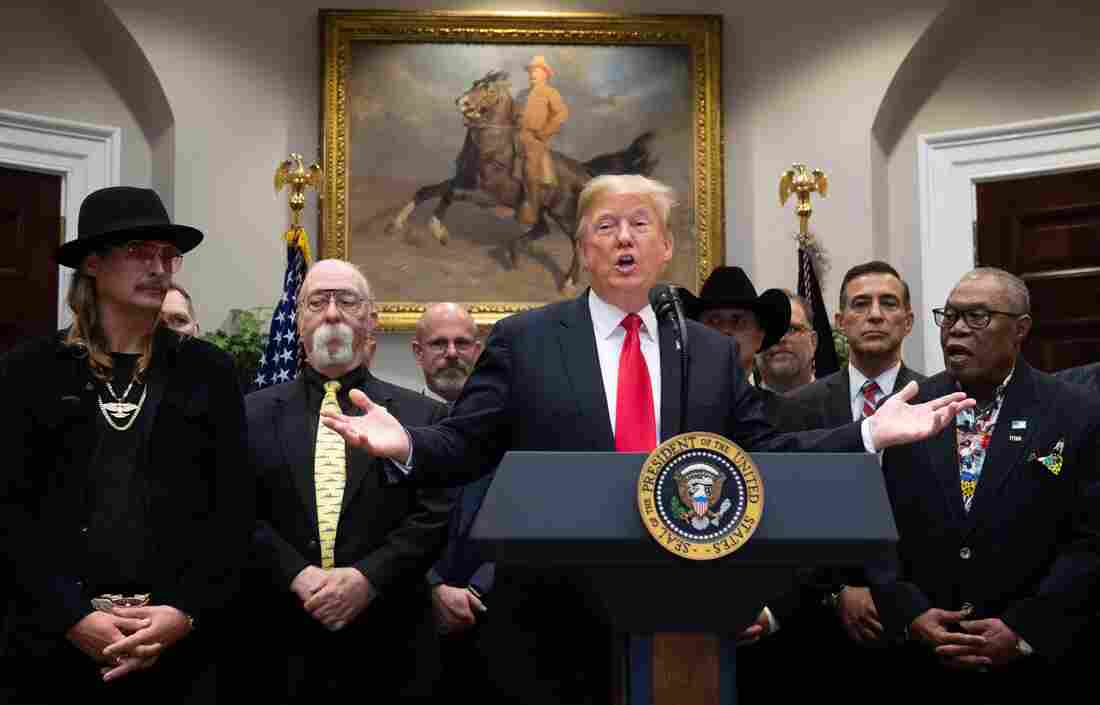 McCurry was Clinton's spokeman during the Ken Starr investigation and other challenging news cycles.

"There were many times where I would have been happy to just throw my briefing book against the wall and say, 'Let's just go out and party,' " says McCurry.

But he didn't. Instead, he showed up in the briefing room and fielded the incoming queries. "I just felt like it was a responsibility, and ... sort of a democratic duty in a way," McCurry adds.

No one from the Trump White House would go on the record for this story, and Sanders hasn't been to the lectern in eight days, so there hasn't been a chance to bring it up in the briefing. But in an interview that got just as testy as some of his briefings, former Trump press secretary Sean Spicer defends the current White House.

"The idea that the briefing is the be-all and end-all and the standard-bearer for the degree of accessibility is rather silly in this age," says Spicer, arguing the press staff answers questions by email and in person and issues statements via Twitter or the press pool.

And as the president keeps taking questions in informal settings known as "pool sprays," Spicer says Sanders is trying to let Trump be his own messenger most days.

Spicer says that when the briefing became a ratings sensation in the Trump administration, its utility decreased. He says that on the cable networks, it got ridiculous with live shots of an empty podium in the corner of the screen hours before the scheduled start time.

Before the start of the Trump administration, former press secretaries McCurry and Ari Fleischer argued in the Columbia Journalism Review that to lower the temperature, the briefing should no longer be a live televised event.

"The briefing today has become an occasion for too much posturing on both sides of the camera. The president's spokesman should and must be available for questioning, especially on those days when the president's schedule does not include a public appearance.

"But a simple change could make a difference. If the briefing is 'embargoed' until its conclusion, it will become just one of several raw ingredients that journalists can use to prepare their reports on the work of the president and the White House. It would instantly become a toned-down briefing, and reporters would use the information from the briefing and test it against other sources as they prepare coverage."

That idea met a lot of resistance from the press corps and didn't happen. Fleischer, who was press secretary for George W. Bush, now bemoans the state of the briefing.

"The good government, on-paper side of me says, 'Of course there should be a regular briefing,' " says Fleischer. "The realist watching the hostility between the Trump White House and the press corps in both directions says, 'What's the point of the briefing?' There's no news. It's just hostility."

You don't have to watch the briefings long to see the hostility on display.

"It is a mutually beneficial thing for a daily briefing to take place," says Perino, who now hosts a show on Fox News called — wait for it — The Daily Briefing.

It is mutually beneficial, she says, because taking questions forces the administration to hone its policy and message. It's a kind of accountability that Perino says she welcomed.

"Internally, when the Cabinet or the staff knows that the press secretary has to go out and answer questions from the press, it can force decision-making or consensus," she says.

The question "How am I going to explain this to the press?" can be a powerful motivator.