Accessibility links
China Lures Taiwan's Latin American Allies The biggest bloc of Taiwan's few remaining world allies is in Central America and the Caribbean. But even that solidarity is splintering. 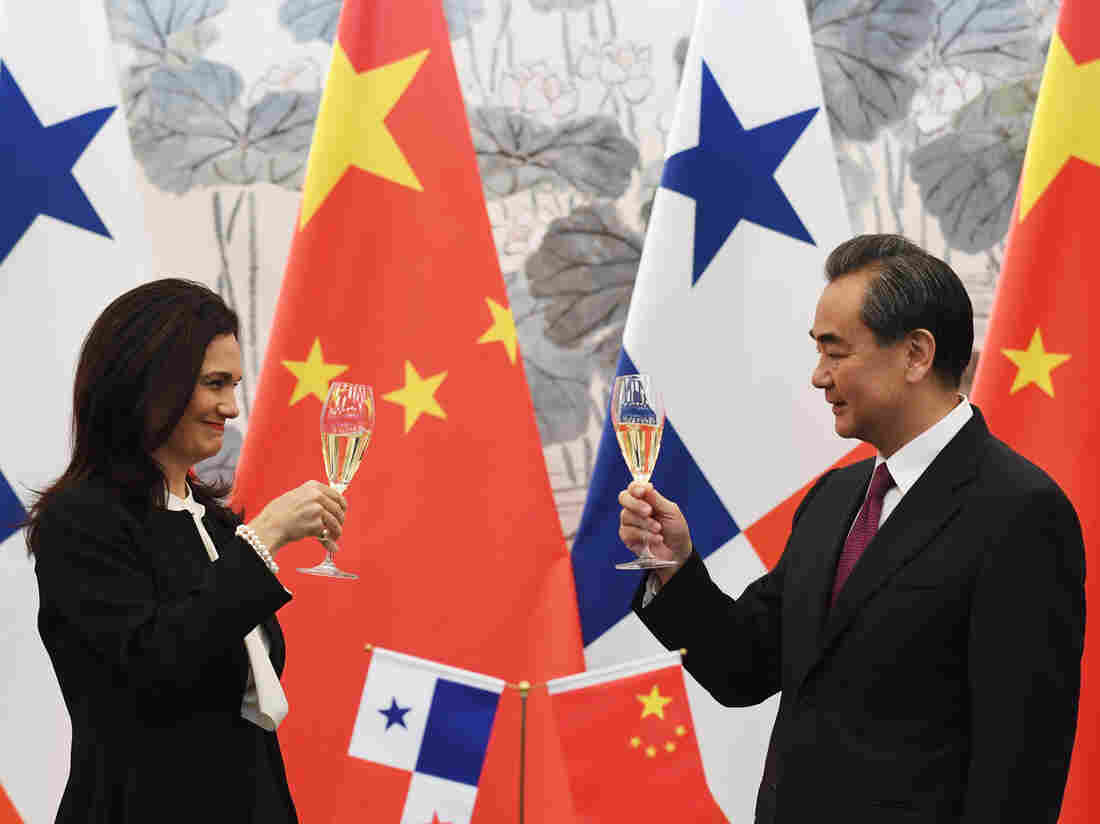 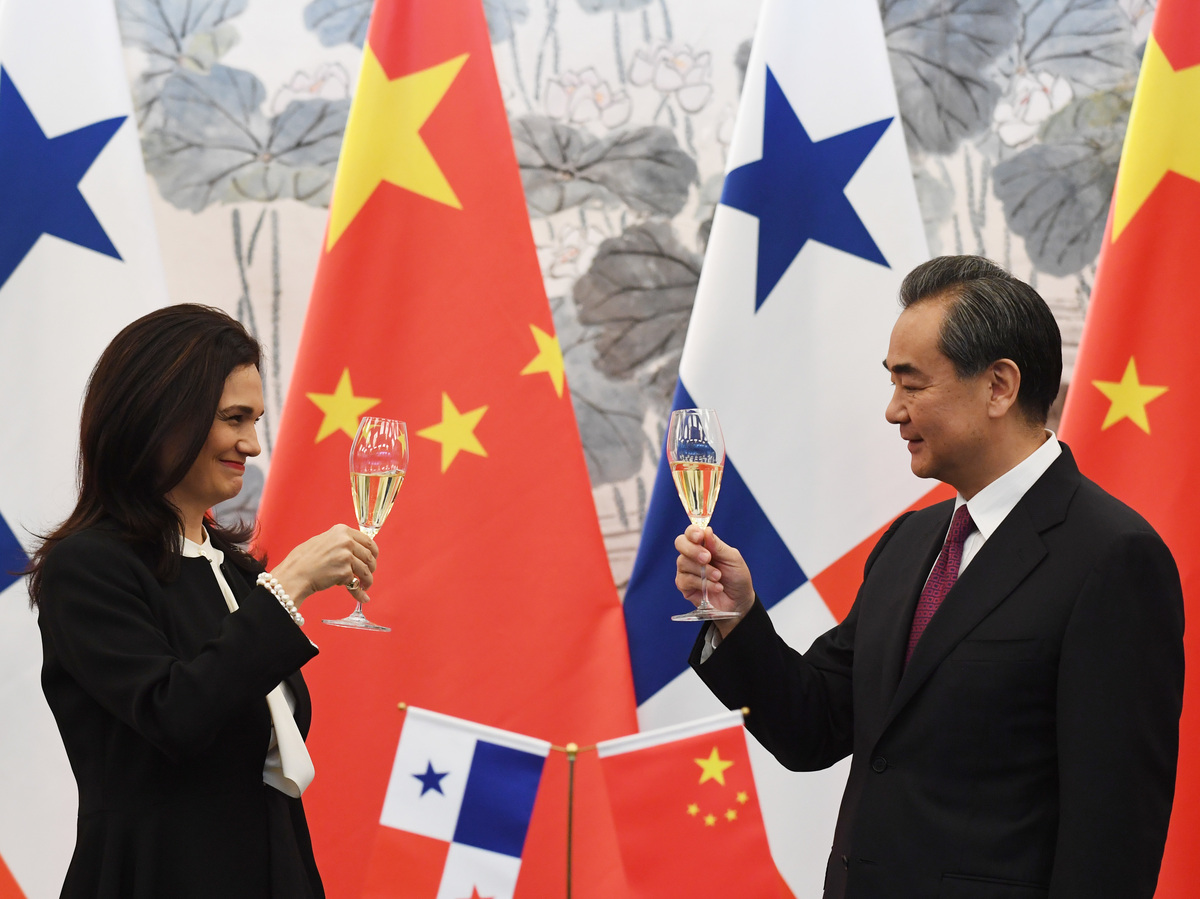 The power struggle between China and the island of Taiwan is playing out in an unlikely region — Latin America.

The biggest bloc of Taiwan's few remaining world allies is in Central America and the Caribbean. But even that solidarity is splintering.

In August, El Salvadoran President Salvador Sánchez Cerén went on national television and said the words Beijing has long worked hard around the globe to hear: "The government of the People's Republic of China is the only legitimate representation of all of China and Taiwan forms an inalienable part of the Chinese territory," said Sánchez Cerén.

With that, El Salvador severed decades of relations with Taiwan in favor of China, opening itself up to trade with and much sought-after investment from the world's second-biggest economy.

Chinese Foreign Minister Wang Yi praised El Salvador for adhering to the "One China" principle that says Taiwan is part of the mainland and not a separate democratic country. China will not recognize or do business with countries that have relations with Taiwan.

"This is the right choice and conforms to international norms and trends of the time," said Wang, at the time.

Even though Taiwan has an independently functioning government, its own flag and military, fewer and fewer countries recognize its sovereignty from China.

Taiwan's support began waning after it lost its seat in the United Nations in 1971. In the 1990s, about 30 countries still chose Taipei over Beijing. But China has been whittling away at those allies. Today, the number is just 16 countries plus the Vatican.

In the past two years, three Latin American countries have severed ties with Taiwan: El Salvador and the Dominican Republic this year, and Panama, with its vital interoceanic shipping canal, last year. China is the Panama Canal's second-largest user, after the United States. 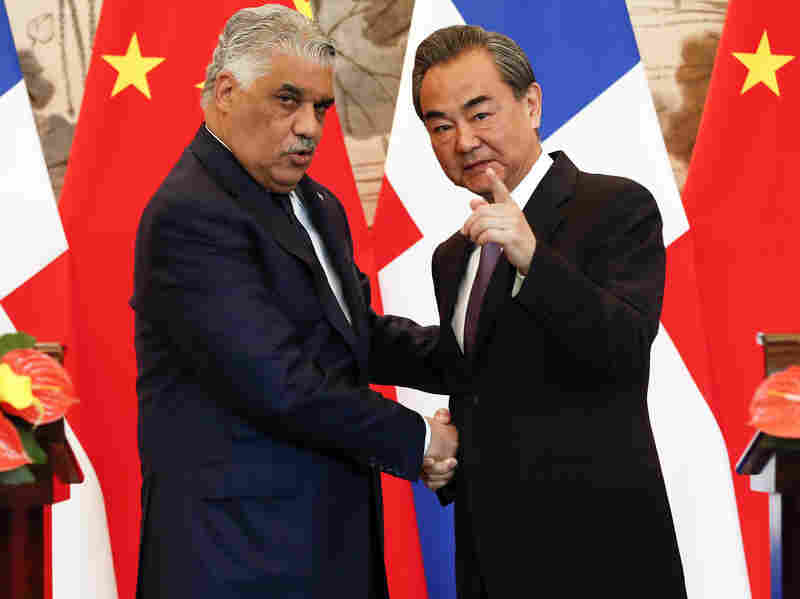 Chinese Foreign Minister Wang Yi (right) shakes hands with his counterpart from the Dominican Republic, Miguel Vargas, during a signing ceremony on May 1 in Beijing. Damir Sagolj/Pool/Getty Images hide caption 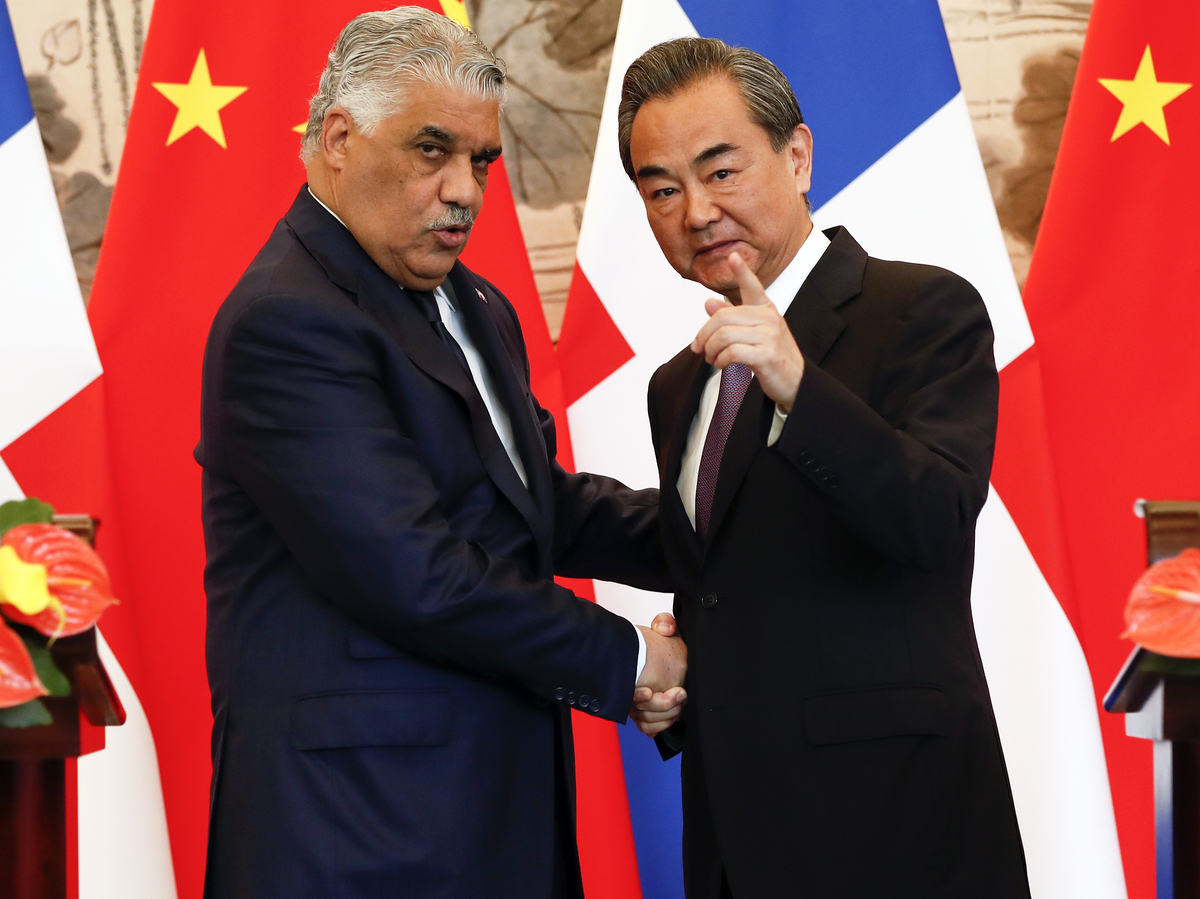 Chinese Foreign Minister Wang Yi (right) shakes hands with his counterpart from the Dominican Republic, Miguel Vargas, during a signing ceremony on May 1 in Beijing.

With fireworks and Chinese dancing dragons, Panamanian President Juan Carlos Varela gushed over his country's new diplomatic ally at the opening ceremony for construction on a huge container port at the Caribbean entrance of the canal. The port project — with an investment of $1.1 billion from China's Landbridge Group, according to the Chinese state-run Xinhua News Agency — was inaugurated the same day that Panama switched alliances to Beijing.

"We are so happy with this group of Chinese investors and thank them for bringing jobs and opportunities," Varela said. China has invested billions in Panama's infrastructure, telecommunications and energy generation in recent years, and China's President Xi Jinping has set a goal to spend $250 billion by 2019 throughout Latin America and the Caribbean region.

"The situation is more of a pressure for these Central America countries to have diplomatic ties with China, because the presence of China is enormous," says Dussel Peters.

And even if they wanted to, Taiwan doesn't have the same resources as China, says Colin Alexander, a researcher at Nottingham Trent University in England.

"There's no point in Taiwan saying, 'Well we will match that and give you something else,' because Taiwan just doesn't have the resources to do that," says Alexander, who wrote a book about the relationship between Taiwan and Central America. He says the self-governing island would be better off emphasizing shared commitments to democracy and transparency in sharp contrast to China's opaque authoritarian ways.

Last year in Guatemala, she addressed the country's legislature, stressing how the two countries struggled through a transition from war to democracy, and calling their friendship firm and stable.

However, later that trip, Tsai sat silently next to Nicaragua's first lady as traditional dancers opened Daniel Ortega's presidential inauguration, after his third consecutive election win that was widely marred by accusations of fraud. Tsai has been equally quiet about the recent turmoil in Nicaragua after months of a government crackdown on anti-Ortega protesters that has claimed the lives of nearly 400 people.

Tsai has reacted angrily to the most recent defections by former Central American allies. After losing El Salvador this summer, she accused China of exhibiting "increasingly out-of-control international behavior."

Taiwanese officials say Taipei will not engage in a bidding in the region. But for years, its leaders have been criticized for using so-called checkbook diplomacy — investing heavily in allies to keep them from fleeing. The price may have gotten too high in El Salvador: Past Salvadoran administrations have been under investigation for allegedly siphoning Taiwan's money for political campaigns. 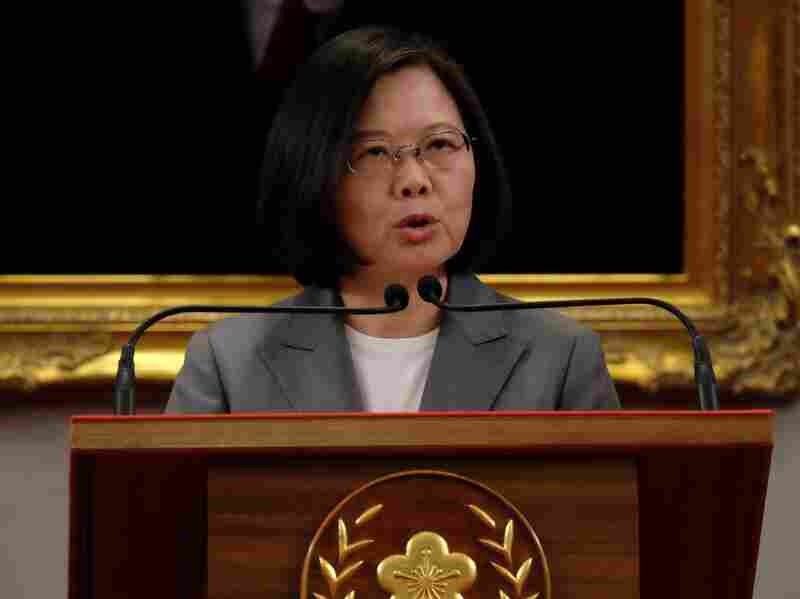 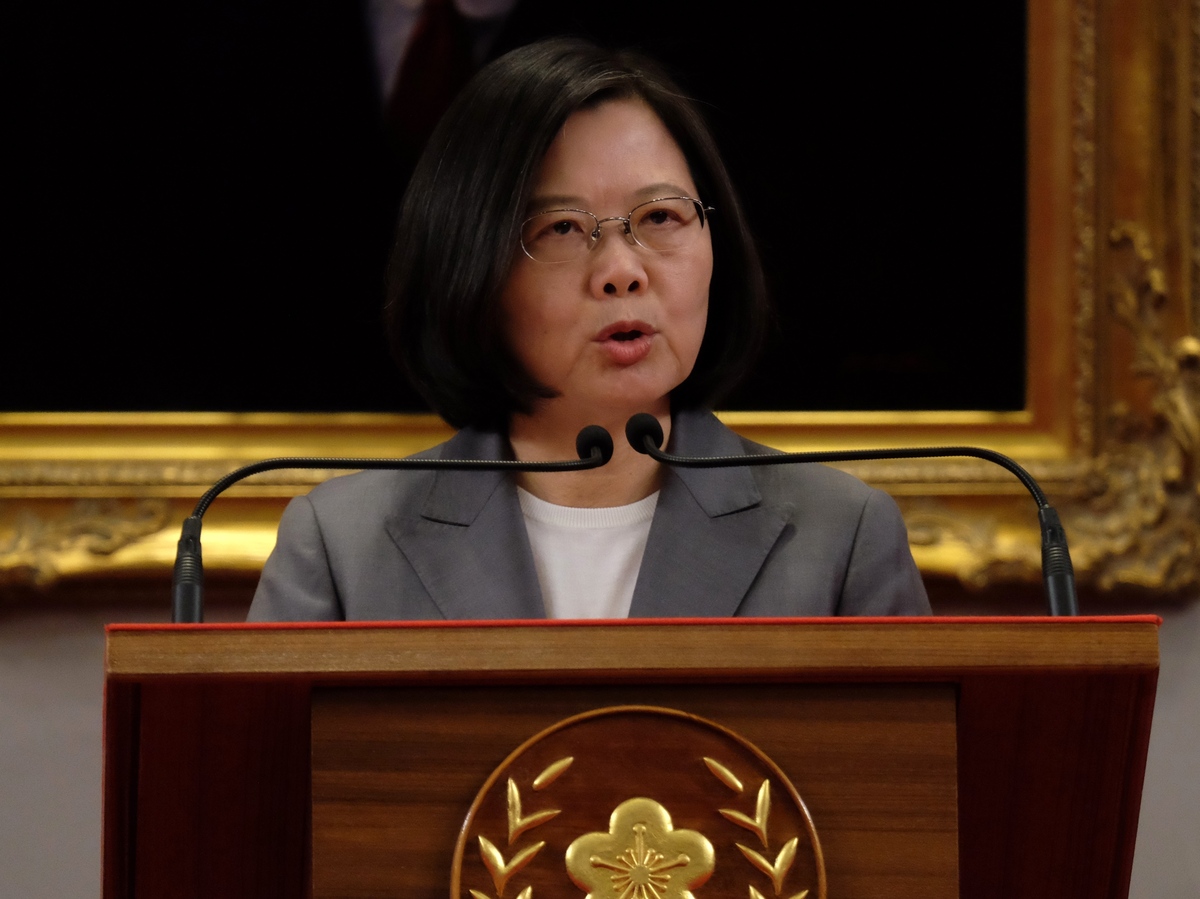 Taiwan's President Tsai Ing-wen speaks during a news conference at the Presidential Office in Taipei on Aug. 21, after China and El Salvador established diplomatic relations.

The White House has warned China about interfering in the politics of nations in the Western Hemisphere.

Immediately after El Salvador's switchover, White House press secretary Sarah Sanders warned countries willing to accept what she said were "short-term economic" gains offered by China that would result in "dependency and domination." The White House also said it would re-evaluate its relationship with El Salvador.

The United States doesn't formally maintain ties with Taiwan either — it switched to Beijing in 1979. But the U.S. does have robust commercial trade and cultural relations with Taiwan, as well as selling it defensive weapons.

In protest last month over the Latin American moves toward China, the State Department temporarily recalled chiefs of missions from Panama, Dominican Republic and El Salvador.

"This isn't a permanent recall and certainly not a break in relations, but it is a shot across the bow," says Eric Farnsworth, vice president of the Council of the Americas, a Washington, D.C.-based think tank.

He says China has an infamous record of burdening poor countries with huge debt and then taking over strategic infrastructure as collateral for the unpaid loans.

It's one thing when China does this in far-away nations in Asia and Africa, but "countries that have had a very close relationship one way or the other with the United States, that's different, particularly from the view of Washington," Farnsworth says. "It is getting pretty close to home, literally and figuratively, and that's why I think alarm bells are starting to go off."

Former U.S. Ambassador to Panama John Feeley says officials in Washington should worry about China's growing access to key allies and sensitive information, not that China has stated plans for military bases in the hemisphere.

"What we are talking about is a steady increase in diplomatic throw-weight throughout the region that will compete in spaces where previously the United States was very clearly the partner of choice," Feeley says.

Before the U.S. handover of the Panama Canal in 1999, a huge American flag stood at the canal's Pacific entrance. Chinese authorities are hoping their flag will soon take up that symbolic spot when they build a new embassy in Panama.