Accessibility links
Difference Beats At The Heart Of 'White Dancing Elephants' Chaya Bhuvaneswar's new collection can be a hard read at times — she doesn't shy away from the difficulties of the immigrant experience in America. But these stories also offer a core of hope.

Difference Beats At The Heart Of 'White Dancing Elephants'

Difference Beats At The Heart Of 'White Dancing Elephants' 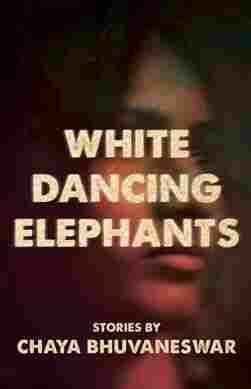 A young woman walks around a city after suffering a miscarriage. She talks to the ghost of her child as she walks: "My sister posed once for her husband and he painted her, as he would paint you in her arms if she had you — if you ever came back to this world, my love, and found me gone." This woman is devastated by her loss, and as you read her words, so are you. You are reading Chaya Bhuvaneswar's White Dancing Elephants, and this first story, which gives the collection its title, sets the tone right from the start: There will be pain, drama, multiculturalism, unfulfilled desires, and the repercussions of love. Yes, reading this will be painful, but you will enjoy every page.

White Dancing Elephants is the literary equivalent of a protest march; it screams about inequality and speaks about the lives of immigrants in the United States. As a migrant living in this country, I felt seen, I connected with the sense of exclusion in the book. Being male, I was surprised by how easily I identified with these narratives that focused mostly on immigrant women of color who feel left out, harassed, and insecure — though I quickly realized that those are emotions all immigrants feel.

An Immigrant's Experience, Recast As Noir, In 'Dragonfish'

'The Fortunes' Is A Resonant Account Of The Chinese Immigrant Experience

Although the 17 tales here differ in length and style, they hang together thematically. Bhuvaneswar understands how sexuality, religion, and culture can alter narratives, and she writes about those things with respect for their impact. In "Talinda," a woman who gets pregnant by her dying friend's husband. The expecting woman is racked with guilt, but still wants a relationship with the man. While infidelity and guilt are staples in fiction, "Talinda" is unique in approaching those feelings in the context of immigrant women's experiences:

She'd felt that they were both marked as outsiders. Not just because Talinda was the new girl at school and, for a time, the only Korean, or because Narika remained the darkest brown girl in the class for all six years of elementary, but because they were both fatherless.

This book has a heart, and it's made of difference. Bhuvaneswar knows difference the way only those living it can know it, and that knowledge makes her prose feel authentic. It also translates into unjudgmental writing. There are academics in these stories, but also characters dealing with poverty and lack of opportunity. In "Newberry," for example, an Indian woman steals money to help an undocumented man escape a bad situation. The story is simple crime fiction, but it stands out because Bhuvaneswar presents the characters as good people whose only option is doing bad things. That both her rich and poor characters face the same discrimination illuminates a depressing truth: Otherness is an obstacle regardless of class.

This book has a heart, and it's made of difference. Bhuvaneswar knows difference the way only those living it can know it, and that knowledge makes her prose feel authentic.

But the biggest surprise in White Dancing Elephants is its core of hope and compassion. From two women having an affair that puts them in danger, to a slave in Renaissance Portugal who learns that sacrifice is sometimes the only way to save what we love, this collection is full of anguish, yet packed with optimism and courage. Bhuvaneswar is unflinching about the lives of those for whom identity is a constant battle and the act of being is an unavoidable challenge, but she doesn't ignore the beauty in their strength. Like Nisha, a lesbian character in "Adristakama," who tells her girlfriend she's moving to India because coming out to her parents is not an option:

No one has a choice. The whole idea of choice, it's just a Western myth designed to make people uncertain, prevent anyone from taking responsibility. It makes people not know who they are. But I know who I am.

Bhuvaneswar is a talented storyteller who can take big topics like harassment and racism and illustrate their destructive power by pulling them into the lives of her characters and showing us the results. Although her dark themes can make reading an uncomfortable experience at times, our current political and cultural landscape means White Dancing Elephants is a necessary book — and one that introduces a gifted voice to contemporary literature.