Accessibility links
After Living Dozens Of Lives, Leading Stuntwoman Mimi Lesseos Has Lessons To Offer Stunt performers can take a punch or survive a fiery car crash. It may sound like a job for the young, but Lesseos has been at it for decades. At 54, she wants to pass on her work's rewards and snags. 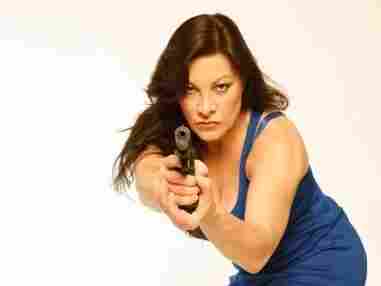 Mimi Lesseos has been working in the field of stunt performance for decades. Now, at age 54 and still working, she wants to pass on the riches of her experience. Courtesy of Mimi Lesseos hide caption

You had to have lingered long after watching an action movie to spot Mimi Lesseos' credit. But, eventually, her name pops up.

It's a small reward for getting decapitated by a helicopter blade on AMC's Fear the Walking Dead, or having her lights punched out in Clint Eastwood's boxing movie, Million Dollar Baby.

But sometimes the stuntwoman gets her sweet revenge, dishing out karate kicks to famous actors playing unsavory hoodlums. In Lesseos' house — which sits in a cul-de-sac in Acton, Calif., a high desert community about an hour north of Los Angeles — her walls are covered with movie posters and photos of her with celebrities she's known (George Clooney, Clint Eastwood, Cher) and some she's pretended to pummel over the years.

She stops at a photo of Erik Estrada, her co-star in The Last Riders. "I beat up his whole gang, took his drugs and then they came and killed me and took the drugs back," she says, describing her star scenes in the 1992 film. Lessos, an auburn-haired 54-year-old with a sturdy build and a distinct cackle, figures she's been killed some 30 to 40 times on screen. Today, very much alive, she's dressed in black track pants and a tank top showcasing biceps boasting definition.

She entered the fight world young. When she was a teenager, Lesseos says she fled a rough household. Already armed with a bit of judo experience that she learned from her uncle, she found her way to mud wrestling by age 16. Working at Hollywood Tropicana at the time, she says, "I did the whole dance around the mud pit and fought another girl almost every night."

Lesseos moved on to professional wrestling, and "Magnificient Mimi" was born. But even though pro-wrestling moves are choreographed, Lesseos says your body still takes a beating.

In 1990, she retired from the ring to start a career in writing, directing and producing her own action films. But while making her first film, Pushed to the Limit, she ran out of funds. To help make money to finish that film, she decided to re-enter the ring — this time in Japan. There, the money was good, but the action was brutal.

Stunt fighting for film and TV, however, is all about safety, Lesseos says. There are pads to protect your knees and spine, the moves are precise, and there's no contact — usually. "I particularly like a little bit of contact. That's just me. It's like, 'Hit me a little bit, you know, come on!' " she says.

Lesseos has worked her share of car crashes and fires. But her specialty — and her point of high pride — is the art of fighting. "It's like a dance, a choreographed, wonderful dance and it's all in the timing. And you've pleased that director so much ... and then you get up, everybody stands up and claps." She gets choked up at the mere thought of the rewarding work, adding, "I've got chills, I almost want to cry."

But that doesn't mean injuries don't happen. Once, while stunting on a TV show, Lesseos had to absorb a car window breaking on her face.The glass was fake, but still, she was bloodied by 50 little shards of candy glass.

About 20 takes into that scene, she says, she didn't back down. "You've got to be the person who's up for another one. Because the director can hire another person and you want them to say, 'Wow that stuntgirl was badass.' "

Women are now more prominent in the stunt work industry than ever before. They've helped end the era when stuntmen would throw on a wig and a dress and pretend to be an actress.

With her 55th birthday around the corner and an arsenal packed with lessons from the world of stunt performing, Lesseos thinks it's time to pass on some of her fighting know-how.

To start, she's just written a memoir called Break the Chain: Reach For The Heavens and she's shopping around a 12-part reality show, America's Superwoman: Next Action Diva in which aspiring action stars learn how to take a fall and a punch.