Accessibility links
Protesters Throng Berlin In Massive Rally To Support 'Open And Free Society' Organizers expected 40,000 people to show up at their march Saturday. Instead, they say, more than 240,000 attended. The event comes at a time when far-right populists are gaining ground in Germany. 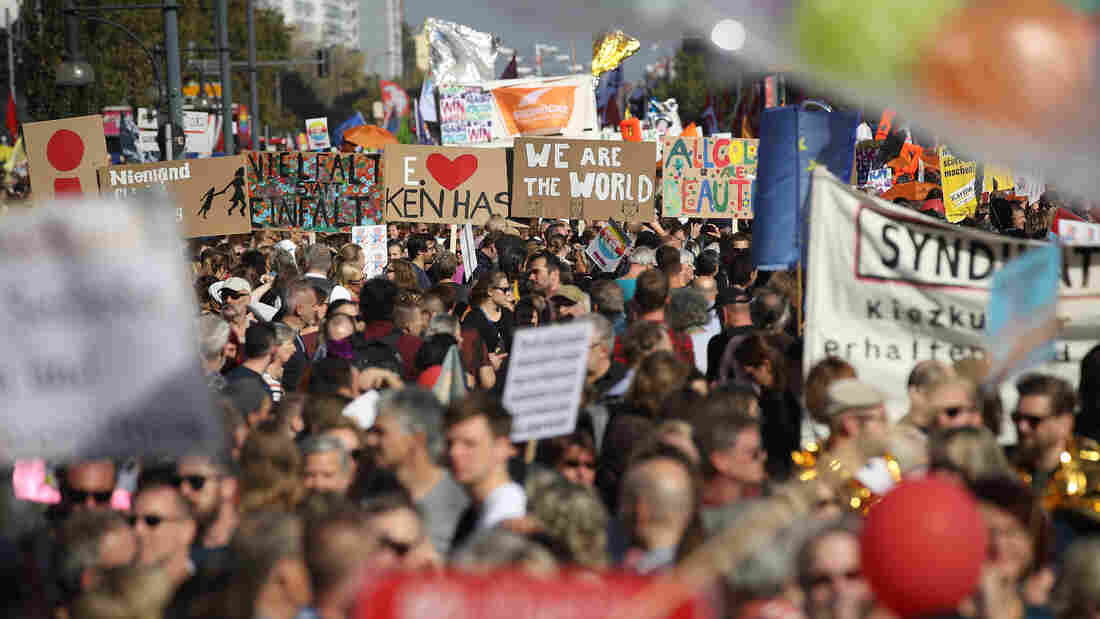 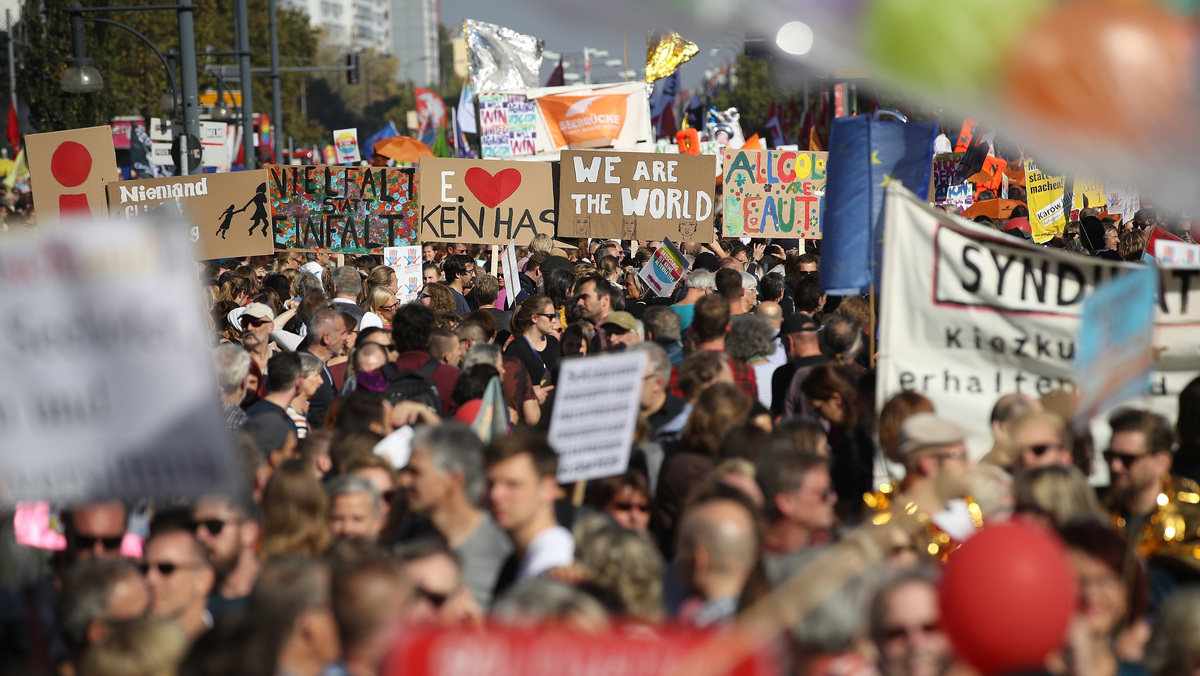 Demonstrators march Saturday in a massive protest against racism in Berlin.

When German organizers pulled together a demonstration in Berlin to support "an open and free society," they had some ambitious goals. They expected roughly 40,000 people to pack the span from Berlin's city center, from Alexanderplatz to the Victory Column, where they were holding their final rally of the day.

As it turns out, those expectations didn't measure up to the real thing.

More than 240,000 people showed up for the march and rallies Saturday, according to the organizers behind the #unteilbar event (#indivisible in English). Local police told the BBC that the demonstrators numbered "in the low hundreds of thousands."

Authorities shut down the 3-mile expanse where the demonstrators had gathered, and overhead photographs showed massive crowds on the tree-lined avenue. 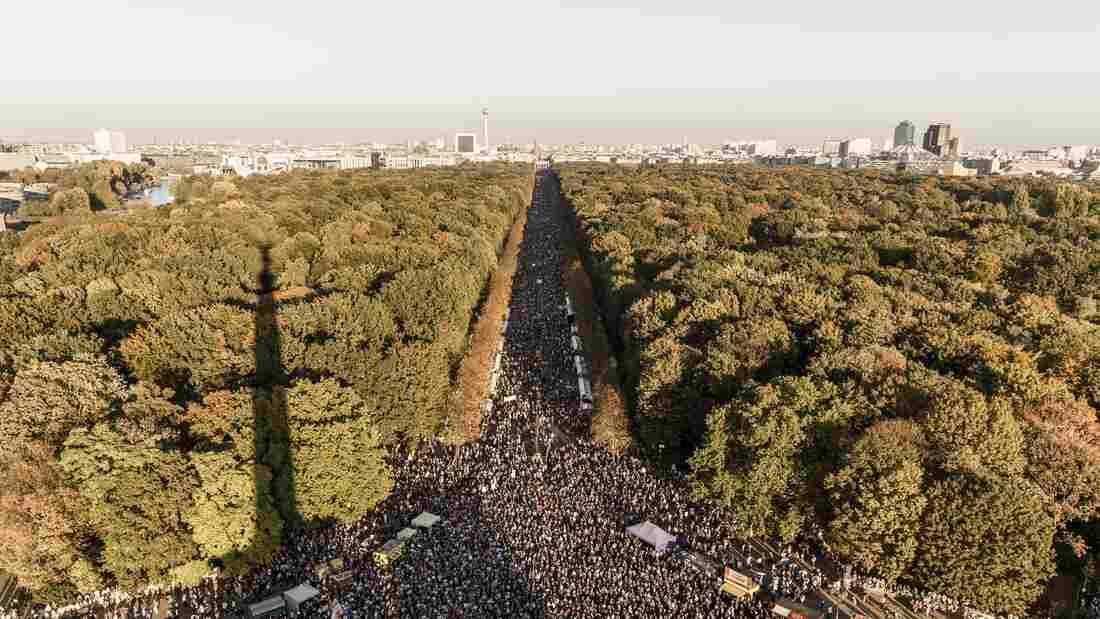 Protesters packed the 3-mile span from Alexanderplatz through the Brandenburg Gate to the Victory Column in Berlin. Carsten Koall/Getty Images hide caption 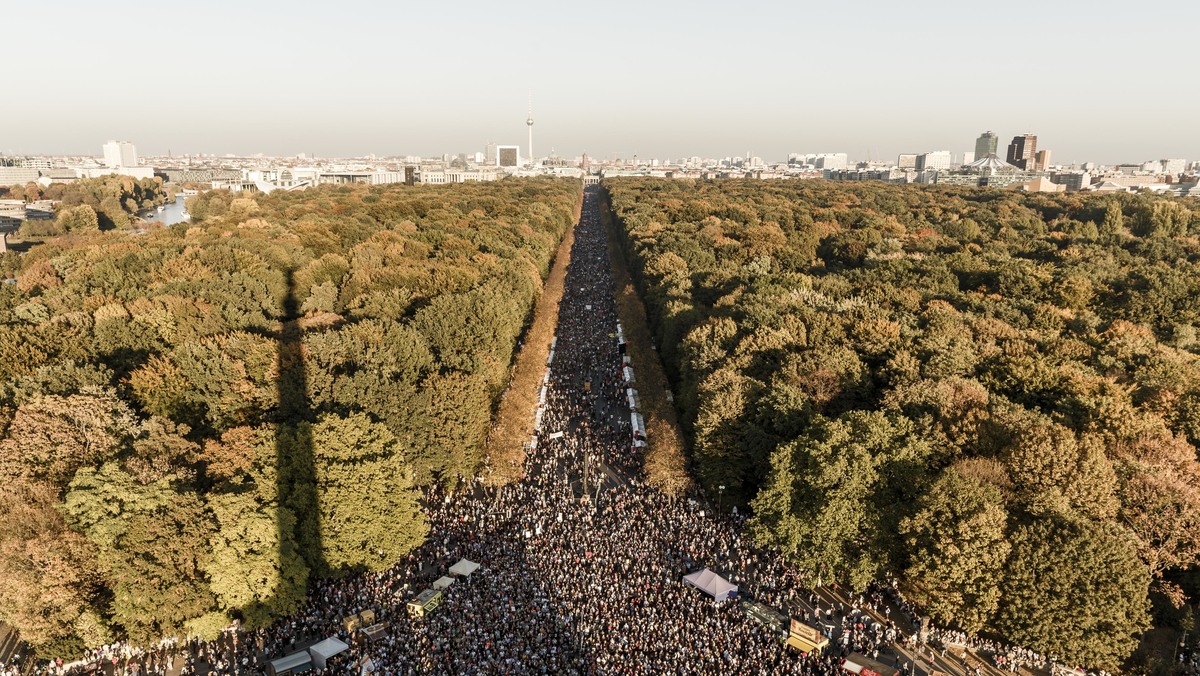 Protesters packed the 3-mile span from Alexanderplatz through the Brandenburg Gate to the Victory Column in Berlin.

"A dramatic political shift is taking place: racism and discrimination are becoming socially acceptable. What yesterday was considered unthinkable and unutterable has today become a reality. Humanity and human rights, religious freedom, and the rule of law are being openly attacked. This is an attack on all of us," organizers wrote in their manifesto prior to the event.

"We will not allow the welfare state to be played off against asylum and migration," they wrote. "We will stand in resistance when fundamental rights and freedoms are in danger of being further restricted."

The march comes at a time when Germany's far-right, anti-immigrant political party, Alternative for Germany (AfD), is gaining ground across the country — particularly in Bavaria. As NPR's Soraya Sarhaddi Nelson reports, the 5-year-old party is expected to win seats in the Bavarian legislature for the first time on Sunday.

Germany's Far Right Finds A New Stronghold In Bavaria, And It's Costing Merkel

German Chancellor Angela Merkel and her fellow conservatives are suffering from low approval ratings, partly because of anxieties surrounding immigration — and the AfD "excels at stoking such fears," Nelson notes. The party argues that without a strict border policy that keeps the number of refugees to a bare minimum, Germany is at risk of losing its traditional national identity.

That argument has resonated with many Germans. The AfD won enough seats in last year's elections to become the official opposition to Merkel's governing coalition.

The party's positions represent the diametrical opposite of the ones voiced by Saturday's protesters.

"There are people here who want to show that they don't support what is going on in Germany, including from established politicians, all this hate, this whole debate about immigration," protester Rola Saleh told German broadcaster Deutsche Welle.

Saleh said she hailed from the eastern city of Chemnitz, where far-right protesters held a rally in August. The protesters shouted chants of "Close the borders!" and delivered Hitler salutes before the scene descended into violence between them and counterprotesters.

"After the conflicts in Chemnitz, a lot of the refugees are afraid and uncertain about the situation," Saleh told Deutsche Welle. "They feel like they've been abandoned ... or they're afraid they'll be provoked into criminal acts by a situation. If you feel like you live in a state where the police are not ready or able to help you, you start thinking about finding ways to protect yourself."

Merkel did not immediately respond publicly to the demonstration, but other members of her coalition offered words of support for those who had taken to the streets.

"The many people in Berlin today supporting cohesion and an open society show courage," said one member of Merkel's Cabinet, Katarina Barley. "We are not divided by hatred and racism!"

A previous version of this story referred to Bavaria in the south as Angela Merkel's home region. Merkel's home district is in the north, and her political party does not operate in Bavaria. However, its sister party, the Christian Social Union, has dominated Bavarian politics for decades.