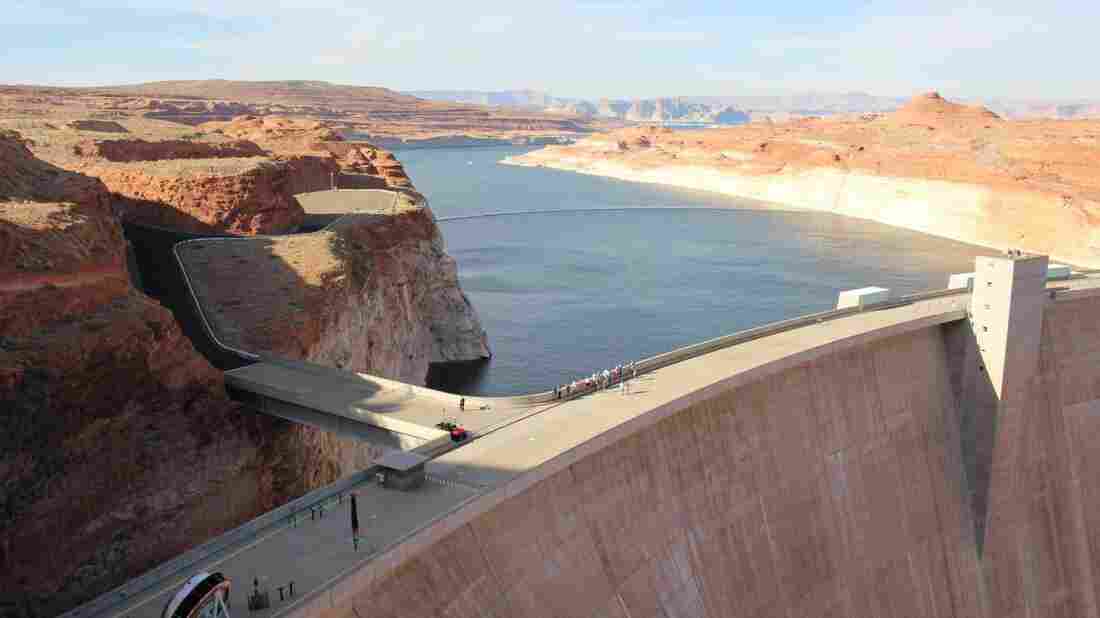 Lake Powell stores water from the Colorado River and straddles the Arizona-Utah border. It is currently storing less than half of its capacity. Luke Runyon/KUNC hide caption 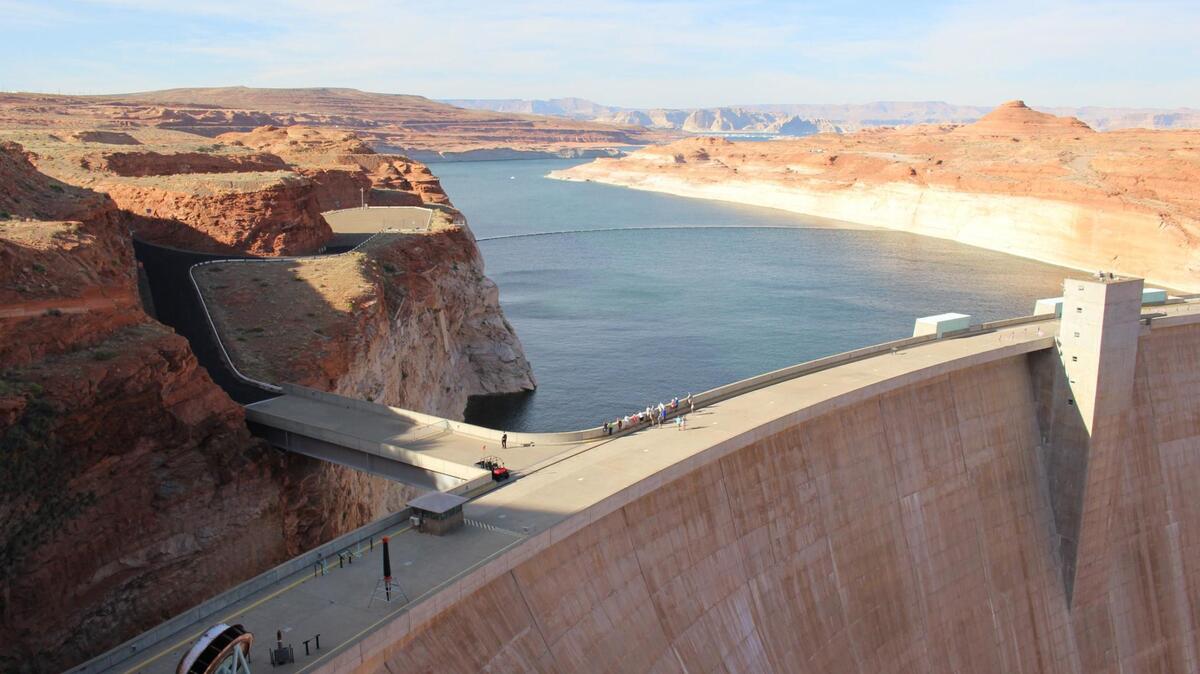 Lake Powell stores water from the Colorado River and straddles the Arizona-Utah border. It is currently storing less than half of its capacity.

In 2007, years into a record-breaking drought throughout the southwestern U.S., officials along the Colorado River finally came to an agreement on how they'd deal with future water shortages — and then quietly hoped that wet weather would return.

Those states are now back at the negotiating table to hammer out new deals to avoid a slow-moving crisis on the river system that supports 40 million people in seven Western states.

The extent of the problem can be seen in a place like Page, Ariz., on the southern edge of Lake Powell, the second-largest reservoir in the country.

Jennifer Pitt, who works on Colorado River policy for the National Audubon Society, is standing on an overlook peering down at the lake itself and the giant concrete dam holding it in place.

"Now you can tell that there's a river here underneath this reservoir because it has somewhat of a linear shape," Pitt says, tracing the red rock canyon with her finger. "And it's wending its way towards where we're standing, here, overlooking the Glen Canyon Dam."

The canyon beyond the dam is stained with a stark white ring. This past year was one of the driest on record, and this spring the reservoir only received about a third of the amount of water it does in an average year.

For the past 20 years, Pitt says, demands for water have outstripped the supply, meaning Lake Powell and its sister reservoir, Lake Mead further downstream, continue to drop. Both are less than half full.

Pitt says without changes to how the two human-made lakes are managed, they could plummet to levels where no water can be released, referred to as "dead pool."

"If that happened, that would be a catastrophe for this region's economy, for all of the people who depend on the Colorado River, and for all of the wildlife that depends on it as well," Pitt says.

That dystopian future of shuttered farms, dried up streams and water-stressed cities is one water managers, like the Upper Colorado River Commission's James Eklund, are attempting to avoid.

"Take Lake Mead," Eklund says. "More is being taken out than comes into it. Like your bank account, if you do that over a sustained period you will run a deficit, and if you're talking about water for 40 million people and economies that are massive — [the] fifth largest economy in the world [is what] the Colorado River Basin represents — then that's significant."

Water managers are attempting to boost reservoir levels with a suite of agreements under the umbrella of "drought contingency planning." The premise is simple: Cut water use now, and use that saved water to bump up Powell and Mead to help to avoid bigger problems in the future, when supplies are likely to be even tighter.

There is clearly enough evidence that if we were to have another 2000 to 2004 kind of a multi-year drought, the system is in very serious trouble.

Water officials in Colorado, Utah, New Mexico and Wyoming are working on a plan that covers the river's Upper Basin and focuses on boosting snowpack with weather modification, better managing existing reservoirs and creating a water bank in Lake Powell.

The Lower Basin plan, being worked on by officials in Arizona, California and Nevada, is meant to create new incentives for water users like farmers and cities to conserve water in Lake Mead and to agree to earlier, deeper cuts to water use so the reservoir can avoid dropping to dead pool levels.

"There is clearly enough evidence that if we were to have another 2000 to 2004 kind of a multi-year drought, the system is in very serious trouble," says Eric Kuhn, the former general manager of the Colorado River District.

When the current guidelines for river management were written back in 2007, he says people were feeling optimistic.

"Historically we've always said, 'Well, next year will be better,'" Kuhn says. "And that's the easy way out."

After just finishing one of the driest and hottest water years on record, much of that optimism is gone.

Arizona has had the hardest time coming to an agreement due to intrastate battles over who will take cuts to water allocations and when they'll take them. But states in the river's Upper Basin have had issues, too, especially with the concept of 'demand management.'

"It's the difficult one," Kuhn says. "Somebody's going to have to use less."

Economies throughout the southwest at risk

In the process of using less water, Kuhn says, there's a fear that if those cuts aren't doled out fairly, it could injure economies throughout the southwest.

Over the last three years drought contingency plan negotiations have laid bare familiar tensions throughout the basin. For decades it's been common for farmers and cities to point fingers at their each other's collective water uses. The same is true with water managers protective of their own interests in either the Upper or Lower Basins.

Colorado River District officials and Western Slope agricultural interests have said they're on board with a demand management program only if farmers are given a choice about how much water they give up, and that they're paid for forgoing water deliveries to their operations. But state officials have left the door open to mandatory cutbacks in a crisis.

We can take out all the lawns we want and still not solve the problems that climate change is going to throw at us.

"The thing we have to remember is [water use] in the basin is over 80 percent agriculture," says Colby Pellegrino, who handles Colorado River issues for the Southern Nevada Water Authority, the Las Vegas metro area's water utility.

Pellegrino says current conservation programs, like their aggressive buyback of residential lawns, won't be enough to avoid a crisis.

"We can take out all the lawns we want and still not solve the problems that climate change is going to throw at us," Pellegrino says.

Climate change is just one factor to get these deals done quickly. Another is pressure from the federal government. Officials with the U.S. Department of the Interior have given states an end-of-year deadline to get things done. If not, the assumption is the feds will step in and do it for them.

"That's, I think, a fear of everybody on the river especially in the Upper Basin," says Jennifer Gimbel, a former Interior undersecretary, now with Colorado State University. "And the last thing we want is interference by the federal government in that role."

Gimbel says the fate of the entire region hangs in the balance.

Back at Glen Canyon Dam, the National Audubon Society's Jennifer Pitt says it's more than just the fates of people and economies tied up in river politics: an entire ecosystem is at stake.

"I think a lot of people who care about wildlife in this region are concerned," she says. "And it's not just birds. Seventy percent of all wildlife in the arid West rely on rivers at some point in their life cycle. So it has outsized importance for anyone who appreciates nature in this part of the country."