Accessibility links
Oscar Romero, Pope Paul VI Elevated To Sainthood In a ceremony at St. Peter's Square in the Vatican, Pope Francis declared the sainthood of the murdered Salvadoran archbishop, the former pontiff and five other people. 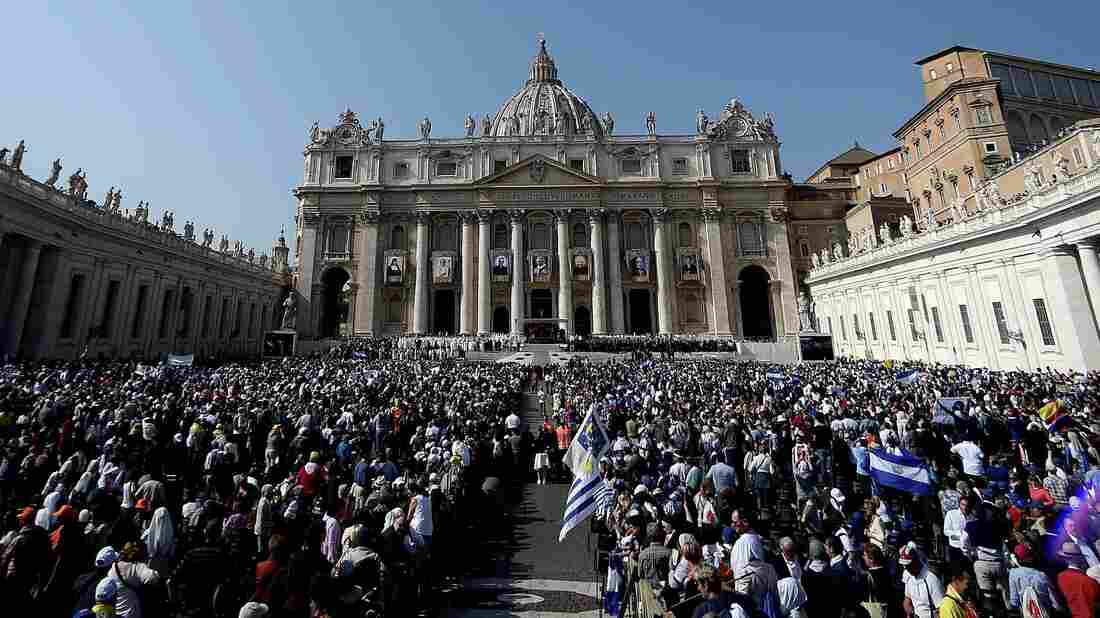 A mass for a canonization ceremony of Pope Paul VI and the martyred Salvadoran Archbishop Oscar Romero, as well as five other people, was in St Peter's Square at the Vatican, on Sunday. Filippo Monteforte/AFP/Getty Images hide caption 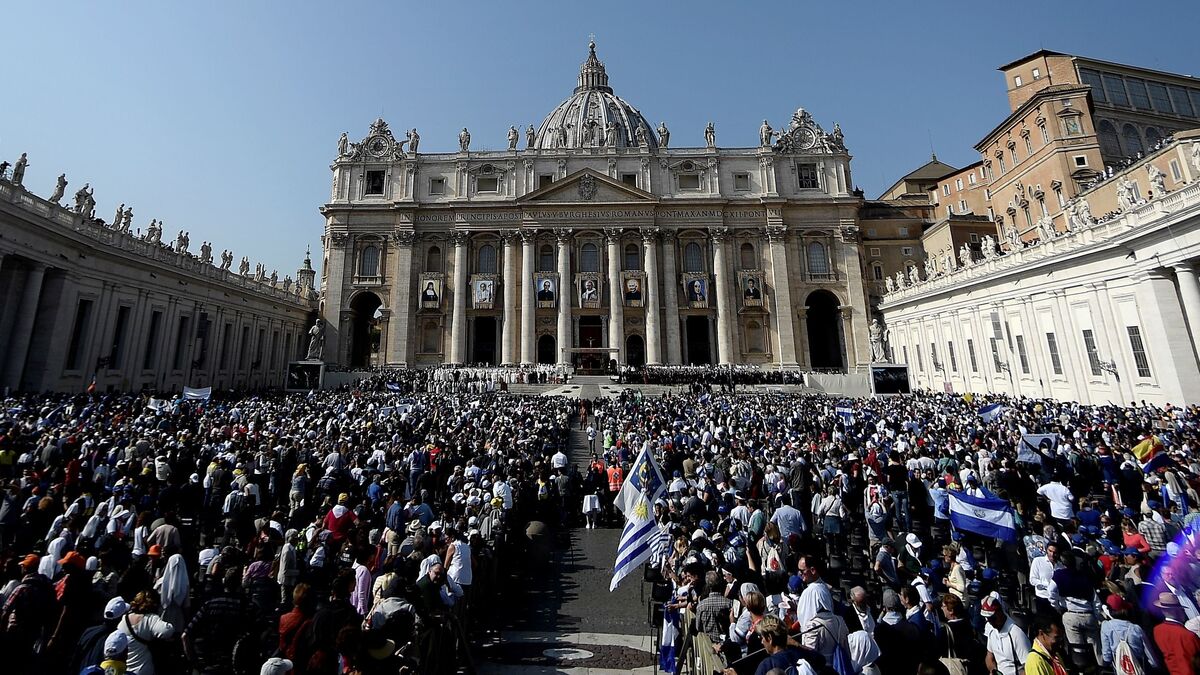 A mass for a canonization ceremony of Pope Paul VI and the martyred Salvadoran Archbishop Oscar Romero, as well as five other people, was in St Peter's Square at the Vatican, on Sunday.

Oscar Romero, the murdered archbishop of San Salvador who spoke up for the poor and oppressed, and Pope Paul VI, the former pontiff who declared birth control "intrinsically wrong," were declared saints on Sunday morning in a ceremony at St. Peter's Square in the Vatican.

The ceremony featured seven new saints all told, including, as the Vatican put it, "five other lesser-known blessed."

Romero, who stood up to a violent regime, was killed by a right-wing death squad on a church altar in 1980. He was a strong influence on Pope Francis, who was born in Argentina, NPR's Sylvia Poggioli reports.

"Romero's dedication to the poor and marginalized greatly influenced the first Latin American pope," Poggioli says. "As soon as he became pope, Francis authorized Romero's canonization — a rebuke to his predecessors, John Paul II and Benedict XVI, who believed Romero was too far to the left."

In the ceremony at the Vatican on Sunday, Francis said, Romero "left the security of the world, even his own safety, in order to give his life according to the gospel — close to the poor and to his people."

During the ceremony, Francis wore "the blood-stained rope belt that Romero wore when he was gunned down," The Associated Press reports.

Back in El Salvador, many more stayed up late in the night to watch live video of the canonization of the martyred archbishop. Photos show people weeping in the Gerardo Barrios square in San Salvador, and mothers holding sleepy, blanket-wrapped children in Romeros' hometown of Ciudad Barrios. Fireworks go off as Catholic faithful watch a televised screening of the ceremony of the canonization of martyred archbishop Oscar Romero at Gerardo Barrios Square in San Salvador on Sunday. Marvin Recinos/AFP/Getty Images hide caption Fireworks go off as Catholic faithful watch a televised screening of the ceremony of the canonization of martyred archbishop Oscar Romero at Gerardo Barrios Square in San Salvador on Sunday.

Romero, whose supporters called him by the honorific Monseñor, was a hero to many, particular El Salvador's poor. But others — including some bishops within the church — accused him of being a communist subversive, driven by politics instead of faith.

As NPR's Danny Hajek reports, crowds packed into the cathedral in San Salvador to hear his homilies, and across the country, even more people listened to live radio broadcasts.

Romero called out bloodshed and defended human rights, becoming known as the "voice for the voiceless." He also named the victims of both murders and disappearances, during a time of widespread silence and denial on the topic, making him a source of news as well as comfort and religious guidance.

He exhorted members of El Salvador's military to disobey orders to kill civilians, well aware that he was risking his life by speaking up.

"Romero was a champion of human rights at a time when El Salvador was on the brink of civil war. His tireless fight for civil rights ranks him among figures like Martin Luther King Jr. ... Romero's voice echoed above the violence that engulfed his country.

The next month, Romero was assassinated. 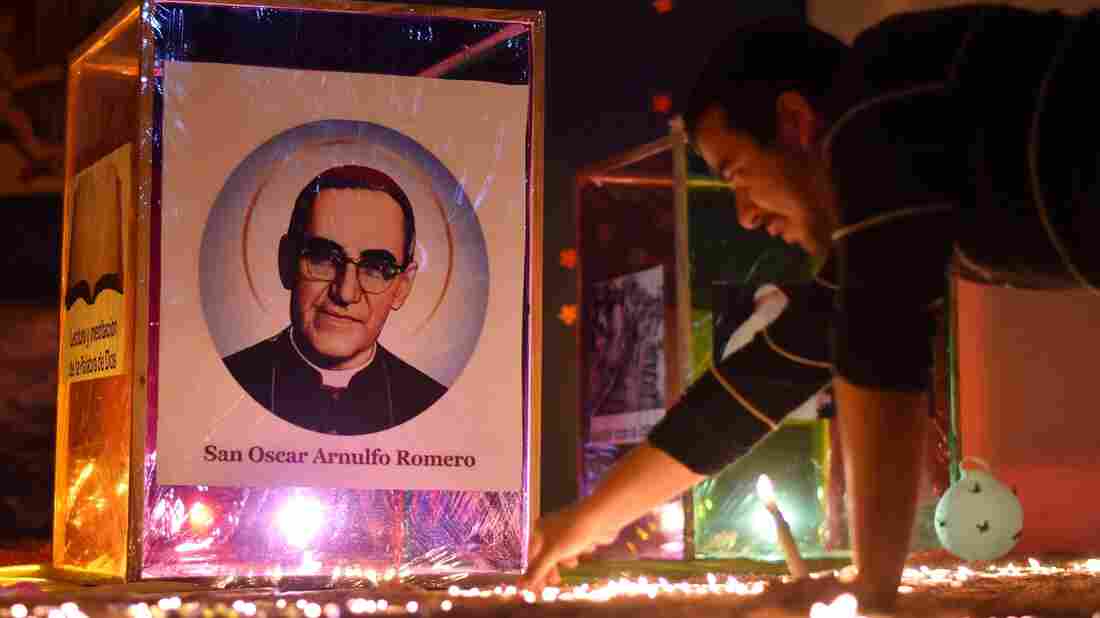 A man lights a candle in Ciudad Barrios, the hometown of blessed Monsignor Oscar Romero, some 165 kilometres from San Salvador, to mark his canonization Sunday. Oscar Rivera/AFP/Getty Images hide caption 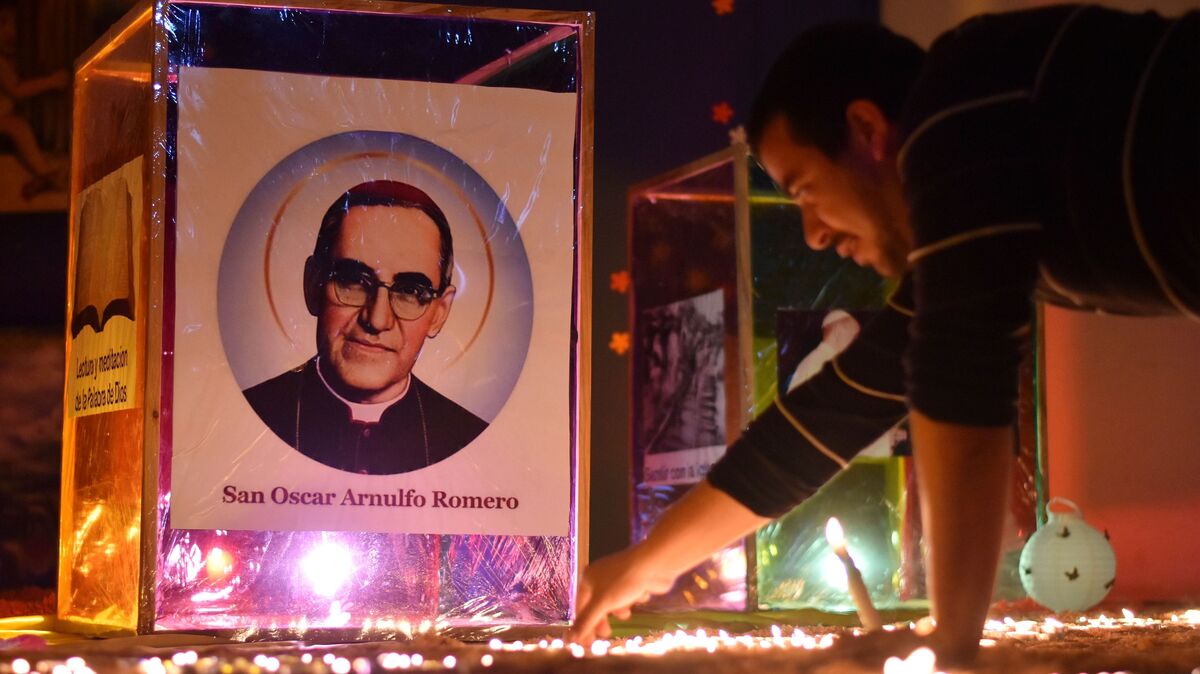 A man lights a candle in Ciudad Barrios, the hometown of blessed Monsignor Oscar Romero, some 165 kilometres from San Salvador, to mark his canonization Sunday.

Pope Paul VI, who was also elevated to sainthood on Sunday, oversaw the closing of the Church's pivotal Second Vatican Council, and issued the landmark encyclical that cemented the church's opposition to birth control.

NPR's Tom Gjelten revisited that encyclical this summer, 50 years after it was released:

"On July 25, 1968, Pope Paul VI stunned Catholics around the world with his announcement of Humanae Vitae, "Of Human Life," a document in which he forcefully reaffirmed the church's previously stated position on the use of artificial birth control, calling it "intrinsically wrong."

" 'We are obliged once more to declare that [methods for] the direct interruption of the generative process,' the pope wrote, '... are to be absolutely excluded as lawful means of regulating the number of children.'

"Humane Vitae came as a surprise to many Vatican observers. Though an encyclical issued in 1930 already prohibited birth control, a papal commission had been assembled to revisit that ban, and a majority of the commission members suggested that it be dropped."

The Vatican calls Paul VI the "pope of modernity" for his influence on changes in "liturgy, seminary formation, theological study, and many other areas of ecclesiastical life."

The five other saints canonized on Sunday were all born in Europe during the 18th or 19th century:

All seven new saints, "in different contexts, put today's word into practice in their lives, without lukewarmness, without calculation, with the passion to risk everything and to leave it all behind," the pope said, according to Vatican News.