Accessibility links
Colorado's Anti-Fracking Measure Would Keep Wells Farther Away From Homes And Schools A ballot measure would keep new oil and gas wells 2,500 feet away from homes and schools, the strictest setback in the nation. The oil and gas industry says that threatens its very existence.

Listen · 3:42 3:42
Colorado's Anti-Fracking Measure Would Keep Wells Farther Away From Homes And Schools 3:42 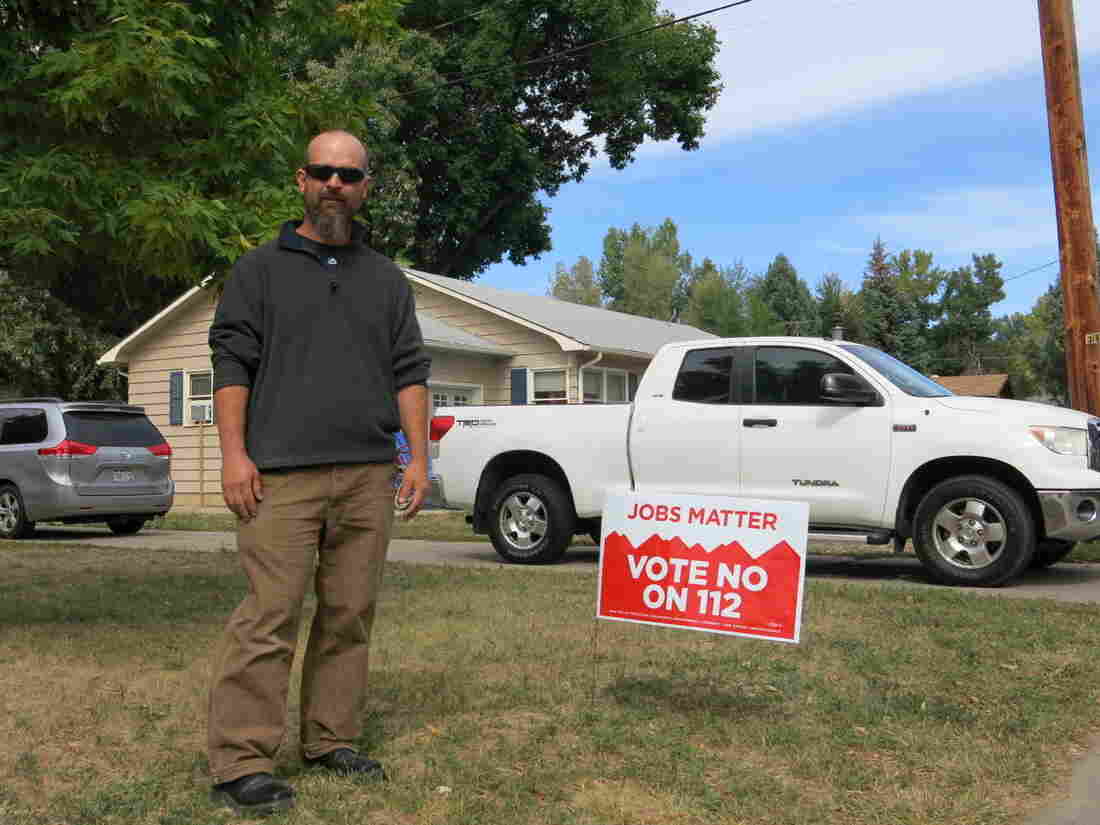 Jeff Van Horn, a land surveyor for the oil and gas industry, worries that Colorado's Proposition 112 would hurt industry growth. It seeks to dramatically increase the distance between wells and homes to 2,500 feet. Grace Hood/CPR hide caption 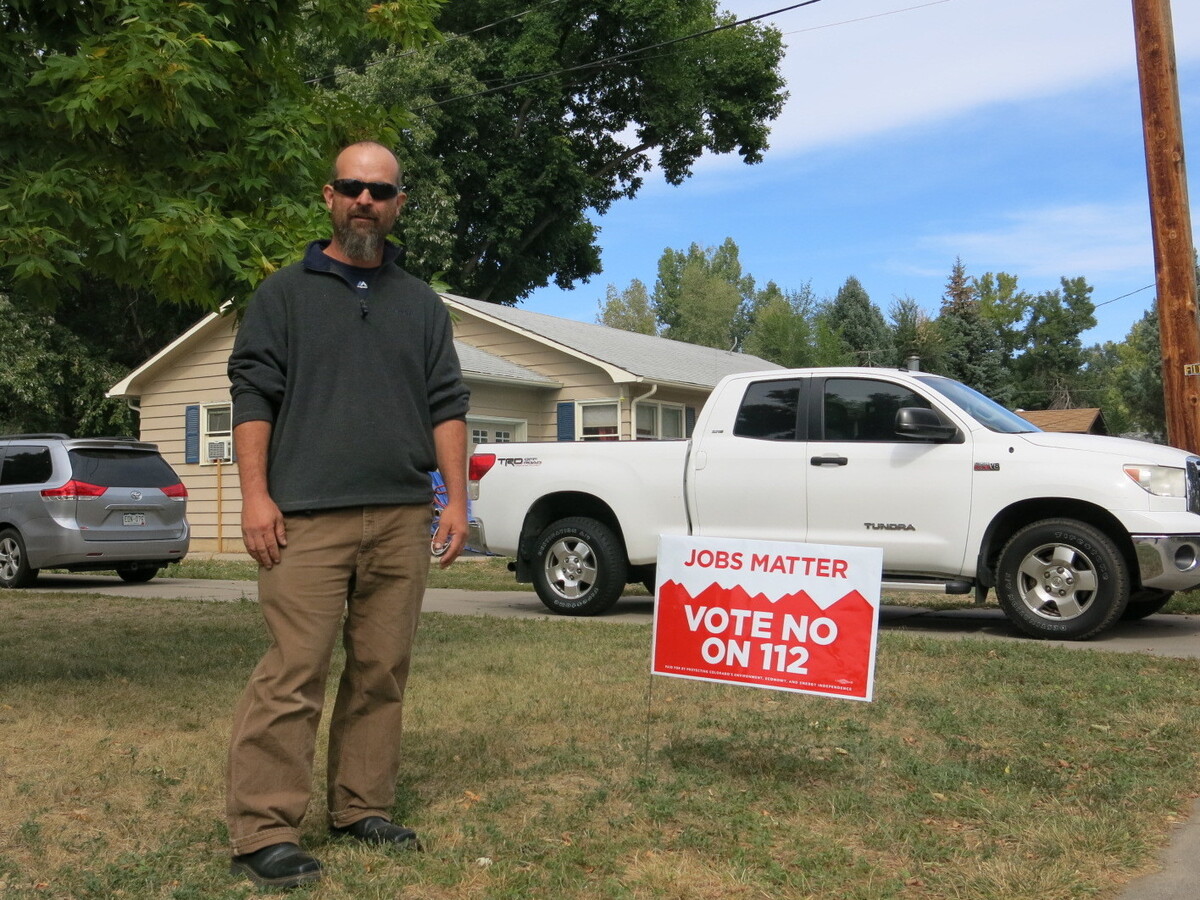 Jeff Van Horn, a land surveyor for the oil and gas industry, worries that Colorado's Proposition 112 would hurt industry growth. It seeks to dramatically increase the distance between wells and homes to 2,500 feet.

Colorado voters next month will decide how close is too close when it comes to oil and gas drilling. A statewide ballot measure known as Proposition 112 would keep new wells dramatically farther away from homes and schools, expanding the distance from a 500-foot minimum to 2,500 feet, the biggest statewide setback requirement in the country. It's a change the industry says would threaten its very existence.

The spending has been lopsided, with the oil and gas industry raising some $30 million to defeat the measure. That's about 40 times more money than environmental groups have raised.

Colorado Rising, the advocates promoting greater distances for well locations, hopes to gain an edge with unpaid volunteers who go door to door.

Therese Gilbert is one of them. She's a mother and seventh-grade teacher from Greeley, the center of Colorado's oil and gas industry.

"This is my little petition bag," Gilbert says as she points to a small denim pouch that holds flyers, a water bottle and pens.

In Loveland, located squarely in purple Larimer County, Gilbert explains to 31-year-old Democratic voter Susana Ruiz how Colorado wells have exploded and burned, putting health and the safety of children and workers at risk. In 2017, an oil tank fire killed one and injured three. A home explosion in Firestone last year that was linked to an oil well killed two people and severely injured another.

Gilbert says she gets the most positive responses from women, and Ruiz does like the idea of more distance between new wells and schools. "Obviously I would want my children safe," she says.

Proposition 112's half-mile setback would also apply to drinking water sources, rivers, playgrounds and gathering spots like amphitheaters. If voters approve, the new regulation would be greater than similar rules in places like Pennsylvania.

Colorado regulators found that increasing the distance between wells and homes could put as much as 85 percent of private and state land off limits for new wells. But that number may be high. One Colorado School of Mines researcher found that companies could still access oil and gas by drilling horizontally underneath homes and schools. 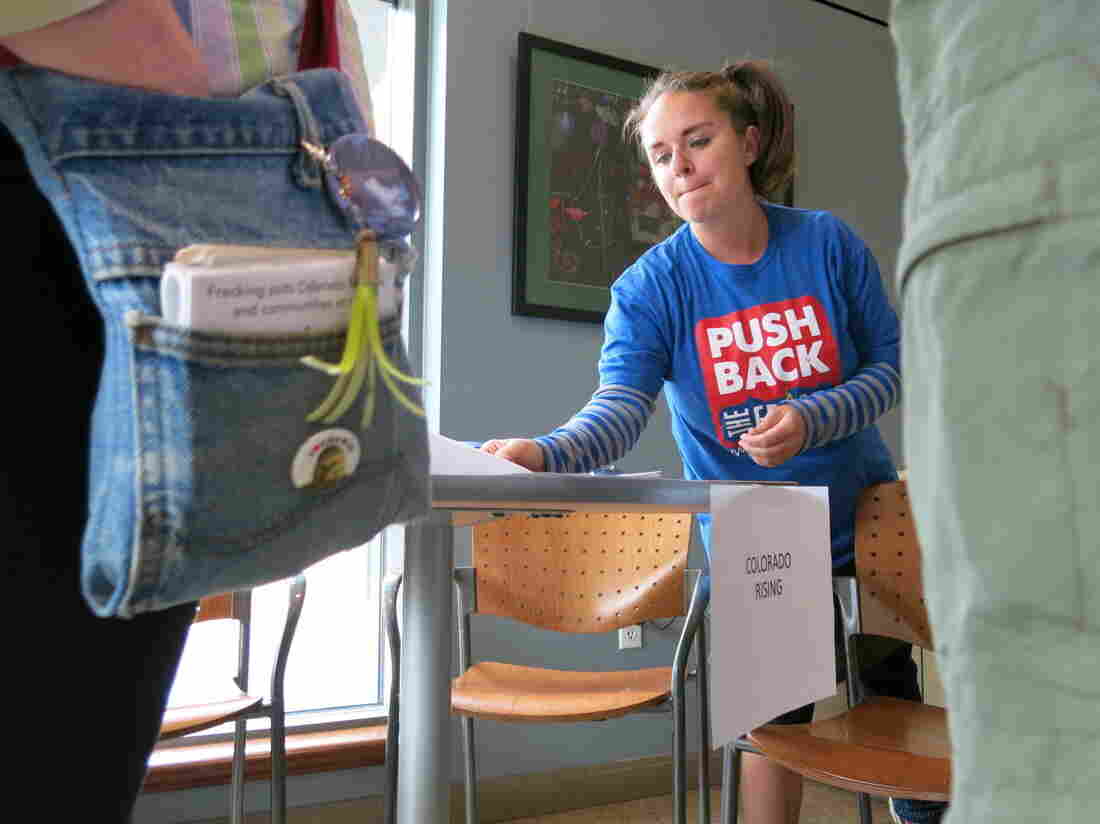 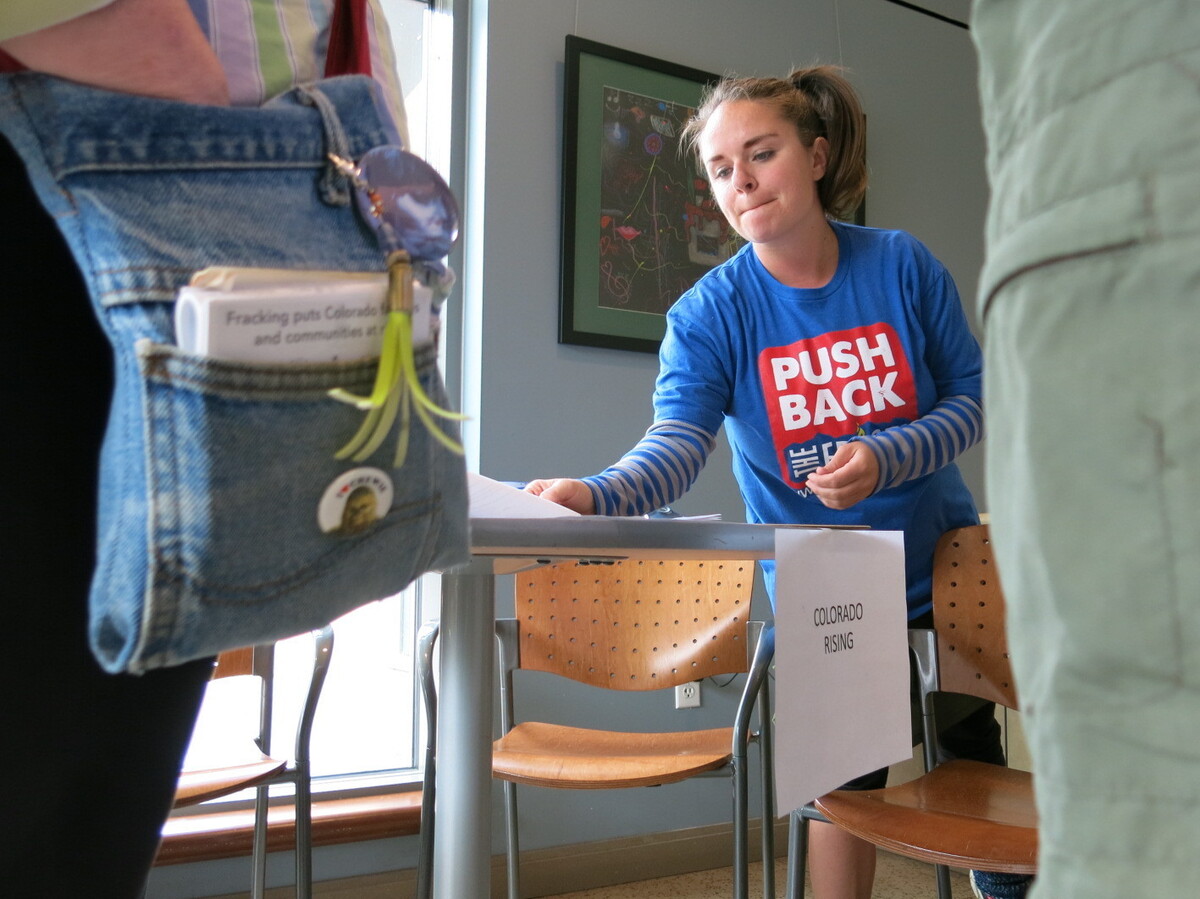 Emily Curnes of Colorado Rising prepares volunteers to knock on doors in Loveland, Colo., last month. The groups supports a ballot measure to keep oil and gas wells farther away from homes.

The group is sparing no expense to beat the measure. It spent $5.5 million in September on advertising. Some ads appeal directly to female voters, including a TV ad voiced by a Weld County mother who works in the industry and touts "the benefits of natural gas and great schools. The two go hand in hand."

Crummy says energy companies pay into two vital state tax streams. In 2017, they paid nearly half a billion dollars in property taxes on producing wells to local governments, school districts and special districts. Between 2012 and 2017, they paid specific oil severance taxes that ranged between $40 million and $265 million. Plus, Crummy points out, Colorado's industry already has some of the most stringent rules in the country.

In Loveland, ballot supporter Gilbert is not scared off by a yard sign that says, "Jobs matter. Vote No on 112." At the door she finds Jeff Van Horn, who surveys potential drilling sites for a living.

"We're certainly worried about it," says Van Horn. "People have been talking. That's where I got my sign ... from work."

Gilbert engages him, asking what he would do if the anti-fracking measure passes. Van Horn says he would "lose hours, the clientele would shrink. So, the competition would be higher."

When Gilbert asks if he has another skill set, Van Horn says, laughing, that he can play bass, "but that doesn't pay very much."

Gilbert moves on to find a voter who hasn't yet made up his or her mind.