Accessibility links
Getting Back What You Lost — Rebuilding In A Wildfire Zone In northern California, homes are being rebuilt in the same area that burned to the ground in last year's Tubbs Fire. Despite the risk, a severe housing shortage in the area is forcing tough choices. 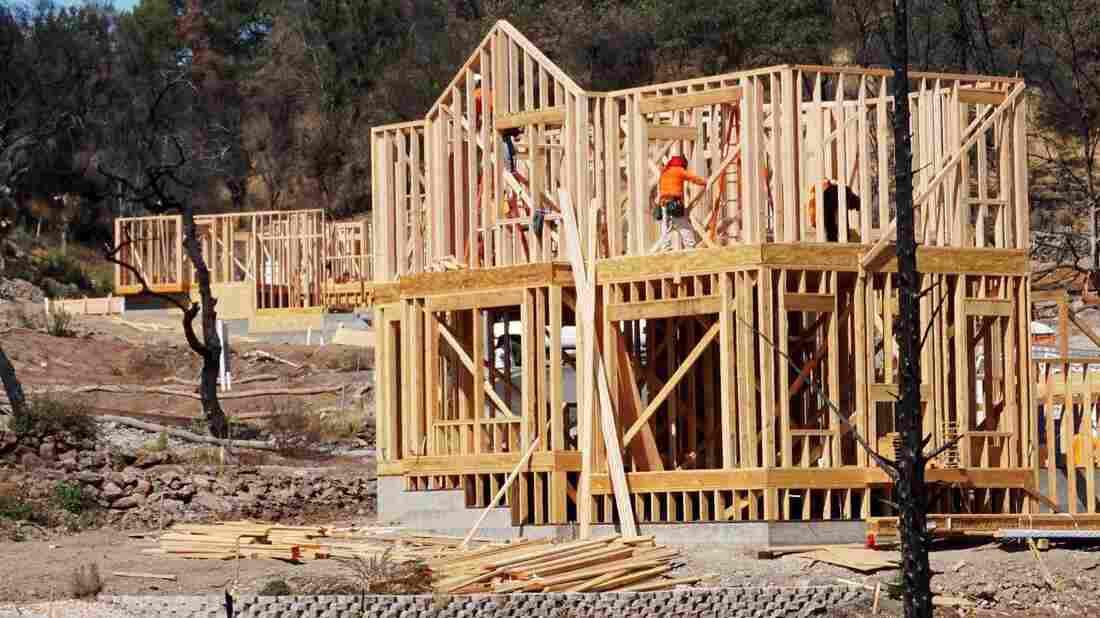 A house being rebuilt in Sonoma County where the Tubbs fire burned last year. The Tubbs fire was the most destructive fire in California history, destroying more than 5,000 structures. Lauren Sommer/KQED hide caption 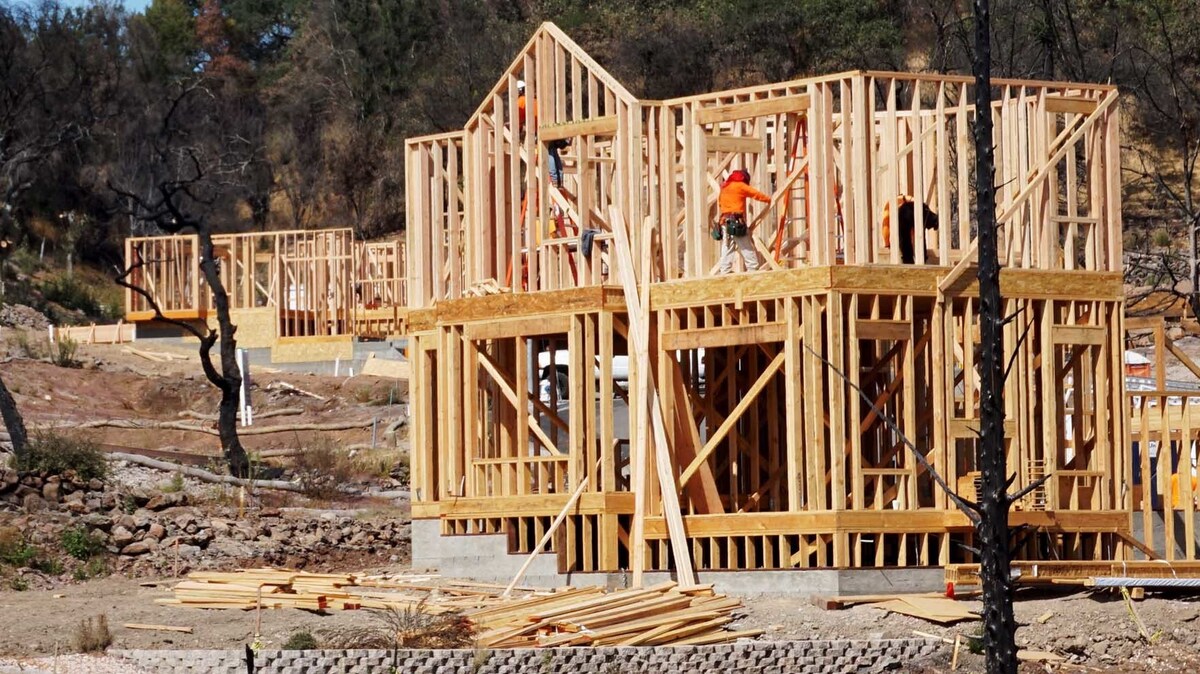 A house being rebuilt in Sonoma County where the Tubbs fire burned last year. The Tubbs fire was the most destructive fire in California history, destroying more than 5,000 structures.

The drywall is finally ready to go up at Paul Lowenthal's new house, just outside Santa Rosa, Calif. After going through the most destructive blaze in California history, his long rebuilding process is almost done.

Since then, the community has banded together to pick up the pieces. But it's also been grappling with a tough question — one that faces fire-ravaged communities around the state:

With wildfire a normal part of the California landscape, how — and where — should residents rebuild to protect themselves?

Hundreds of Sonoma residents have opted to stay put, both financially and emotionally tied to their land.

Lowenthal is one of them.

He left his home on a windy night one year ago, called into work as Santa Rosa's assistant fire marshal. The Tubbs Fire was spreading into town and he had to get people out.

"It was exploding at a rate that I would have never imagined," he says. "I left in my work truck and uniform and thought: worst case scenario, I'll be back tomorrow morning."

Later that night, he drove past his own neighborhood.

Do I think those areas will burn again? Absolutely. It's done it before.

"You couldn't actually make out individual homes in here," he says. "It just looked like an entire wall of fire. And then realized right away my house is gone."

He worked the next five days on just a few hours of sleep, until finally, he stopped to take stock.

"And then realized I have nothing," he says. "Literally had nothing."

Picking Up the Pieces

"Do I think those areas will burn again?" Lowenthal says. "Absolutely. It's done it before."

It happened 54 years ago, when the Hanley Fire burned almost exactly the same area. But Lowenthal was keenly aware of this latest fire's effect on an already-tight housing market.

"I made a decision that it made more sense to rebuild here," he says. His daughter was also a big part of that decision.

"Could I have convinced her that we could live in a really cool place somewhere else?" he says. "Maybe. But this was our home."

In the hills above Santa Rosa, wooden frames of houses are rising among the blackened trees. Many of the rebuilt homes will include new fire-resistant building materials, something few had when the fire swept through.

But many others — almost 2,000 of the destroyed structures — will not be required to meet building standards for wildfire-prone areas. That's because of California's decade-old zoning rules. Some homeowners are taking it on themselves to meet those building standards anyway, dipping into their insurance payouts to cover the cost. Others are not.

City and county governments are under pressure to build new housing in areas at risk for wildfire because of the region's severe housing shortage.

As people are trying to heal and recover, local leaders have been faced with balancing those delicate issues. With climate change making California's fires more extreme, their decisions will affect lives for decades to come.

This time, Lowenthal says, his new home will be built with cement-fiber siding and other fire-resistant materials and will better prepared to withstand fire.

"Between the roof, the siding, things of that nature, it was definitely a step that I wanted to take," he says.

But Lowenthal isn't legally obligated to do any of that, as his home was outside the area subject to California's "Wildland-Urban Interface Codes." They include a broad range of standards for siding, roofs, decks, and windows, as well as requirements for gutters and attic vents that are meant to prevent embers blown ahead of a wildfire from igniting a home. 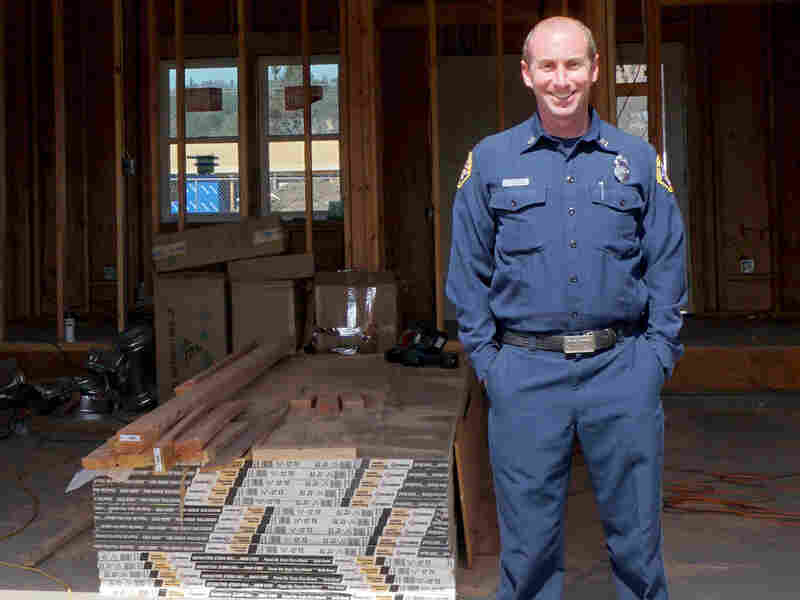 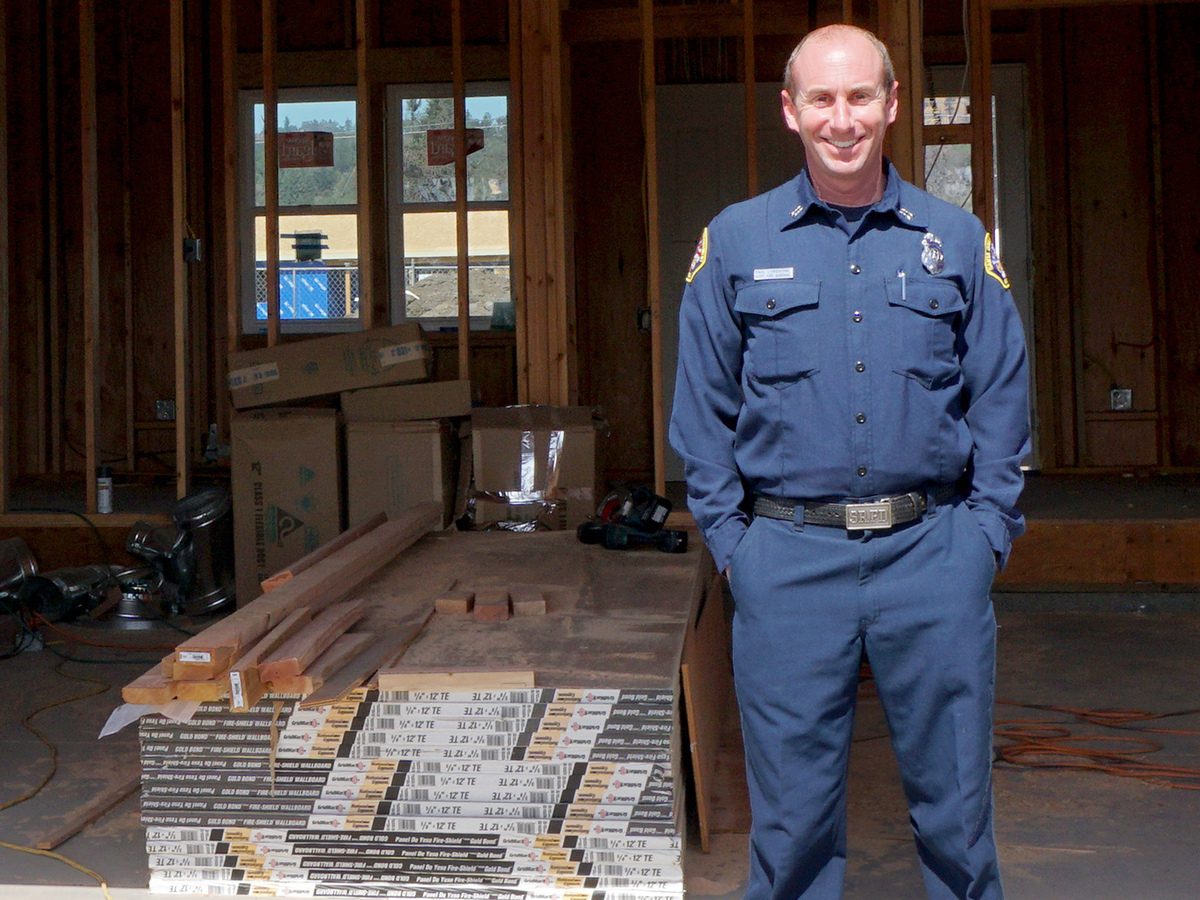 Nearly a year after the Tubbs Fire, Paul Lowenthal's rebuild is finally nearing completion — this time with more fire-resistant materials.

The zones were established by a set of 2008 Cal Fire maps that outline wildfire risk by considering vegetation, fire history and slope. Sonoma County's zones are based exactly on those maps, while the city of Santa Rosa had extended the stricter requirements only somewhat beyond what was on the state maps.

Almost 2,000 buildings destroyed in the Tubbs Fire in Santa Rosa and Sonoma County weren't mapped in those zones and won't be required to use fire-resistant materials.

"We don't have an extra set of rules or requirements that we put on people to rebuild," says David Guhin, Santa Rosa's director of planning and economic development.

Guhin says Santa Rosa would be on shaky legal ground if it imposed new wildfire building codes on structures that weren't required to meet them when they were destroyed. But, since most of the homes were built decades ago, before most modern building codes, he says even the basic code upgrades for the new structures will help.

"The housing stock that's going in is much more resilient than the previous house stock," he says.

Cal Fire is in the process of updating the fire hazard maps using more realistic data, including localized information and historic fire conditions. A draft of the maps is expected sometime next year. The new maps could put many homes into a fire hazard zone that aren't in one today.

But several North Bay officials say the community can't wait for that to be sorted out.

I'm not going to let the perfect be the enemy of the good. This community needs to rebuild.

"I take solace in that the existing code is significantly better than what was there before," said Tennis Wick, who heads Sonoma County's permit and resource management department. "I'm not going to let the perfect be the enemy of the good. This community needs to rebuild."

Wick says many homeowners are choosing fire-resistant materials anyway, such as cement-laden siding and metal roofs.

Some fire victims have opted to pull up stakes after living through the fire's emotional trauma or due to steep rebuilding costs. In the hilly Fountaingrove neighborhood of Santa Rosa, for-sale signs sprout from empty lots among the construction sites.

But many other homeowners are tied to their property, either restricted by insurance policies that prescribe where they can rebuild, or simply priced out of other Bay Area homes. And that concerns Santa Rosa City Council member Julie Combs.

"I know I've heard stories about flooding along the Mississippi and thought, 'Why did they keep rebuilding there?'" said Combs.

"I'm all for having property owners have choice," she adds. "And right now, we aren't really giving them a choice to not build on the land they're tied to in a high-fire-hazard area."

Combs says she's interested in programs like those that already exist for flooded homes, where governments or neighbors can buy out inundated properties so they won't be re-developed.

She's not confident that today's wildfire building codes are enough to protect people. The codes are meant to reduce risk, but don't eliminate it.

Within the Tubbs fire footprint in Santa Rosa, 22 homes were built before the fire with the most recent wildfire codes. Twenty-one of them burned anyway.

"That doesn't strike me as particularly good odds," says Combs.

Homeowners considering not rebuilding face another hurdle: there are few other places to go.

In Santa Rosa, the Tubbs Fire obliterated five percent of the city's housing stock, exacerbating an already brutal housing market. Before the fire, the city estimated it needed 5,000 more housing units. The fire added 3,000 more to that number.

"We need to walk and chew gum at the same time," David Guhin of Santa Rosa says. "We're going to rebuild our community as fast and quickly and as efficiently as we possibly can, but we also have to build new homes as fast as we can."

"We made that a priority this year," he says. "We put a number of polices in place such as expedited permit processing, reducing the impact fees substantially for housing in the downtown core."

But there has long been pressure to build in the surrounding hills, where the wildfire risk is highest.

"Development of single-family homes on the outskirts of town will happen on its own," Guhin says. "There is a market for that."

A new project looks for approval

In February, the Santa Rosa City Council faced down that question.

San Francisco-based City Ventures asked for a zoning change to allow its Round Barn Village project to go forward. The 237-unit townhome development is proposed for a hillside that burned in the Tubbs Fire. 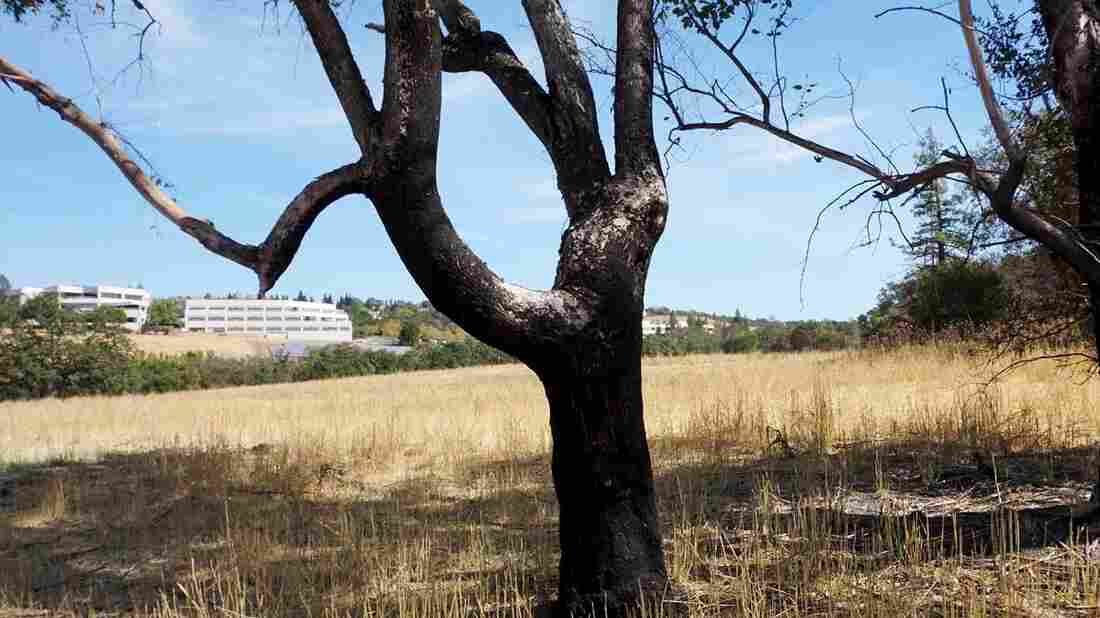 A new housing project in Santa Rosa, California is proposed for a hillside burned in the Tubbs Fire. Lauren Sommer/KQED hide caption 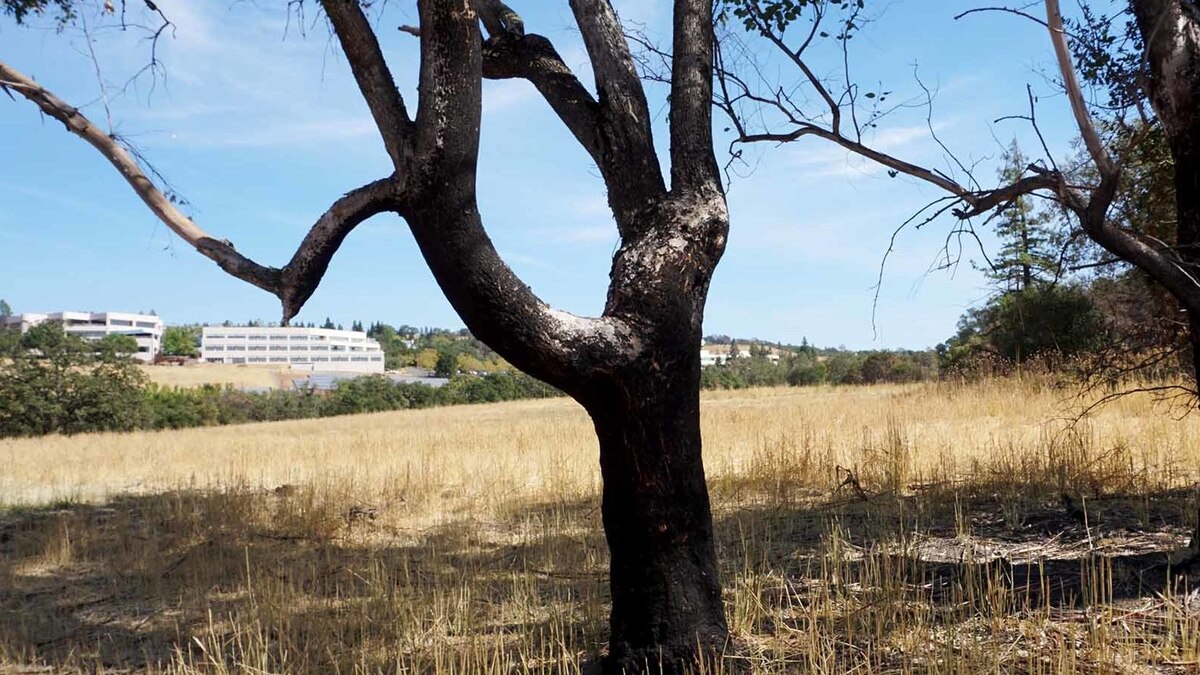 A new housing project in Santa Rosa, California is proposed for a hillside burned in the Tubbs Fire.

City Ventures made the case that the homes would be built using wildfire standards and would provide much needed affordable housing.

"We absolutely need the housing," said council member John Sawyer at the meeting. "And lots of mistakes were made in the past with saying no."

"I was really sorry to be a lone vote," says Combs. "It becomes very difficult to explain why we would approve that and not approve more. And I have real concerns that more is coming. We don't need sprawl. We need to be building up."

That same pressure to build is also facing Sonoma County as a whole.

"I met with a resort that burned twice, once in the Hanley fire and a second time in the Tubbs," Tennis Wick says. "New people came to see me about building a third one. And I told them I just could not support the project. There's an enormous pressure on us to be approving resorts in remote areas."

In communities still in shock from the fires, these fraught decisions won't come easily.

"I think that in a disaster, there's such a strong emotional pull to get what you lost back," says Combs. "I think that's a powerful pull."