Accessibility links
Battle For The Senate: 10 Races That Will Determine Control Republicans' chances to hold the Senate appear to have improved following the confirmation hearings for Justice Brett Kavanaugh. See which states to watch closely over the next three weeks.

The battle for the Senate is being fought on Republican-friendly turf, and with three weeks until Election Day the GOP is increasingly optimistic that the chamber will remain in the party's grasp.

Fears that a fiery Democratic opposition could turn the map upside down have abated some, now that the GOP base is more tuned in following the confirmation fight over Supreme Court Justice Brett Kavanaugh.

But the charged political dynamics of 2018 leave open the potential for drama when results come in on Nov. 6, particularly in 10 close races that will determine whether Republican Mitch McConnell or Democrat Chuck Schumer will be running the Senate next year.

After last year's upset in the Alabama special election, Republicans have a slim 51-49 edge in the Senate. Given that and other factors, Democrats have an outside chance to win back control of the Senate if they end up with a net gain of two seats — something that is unlikely but not completely outside the realm of possibility. 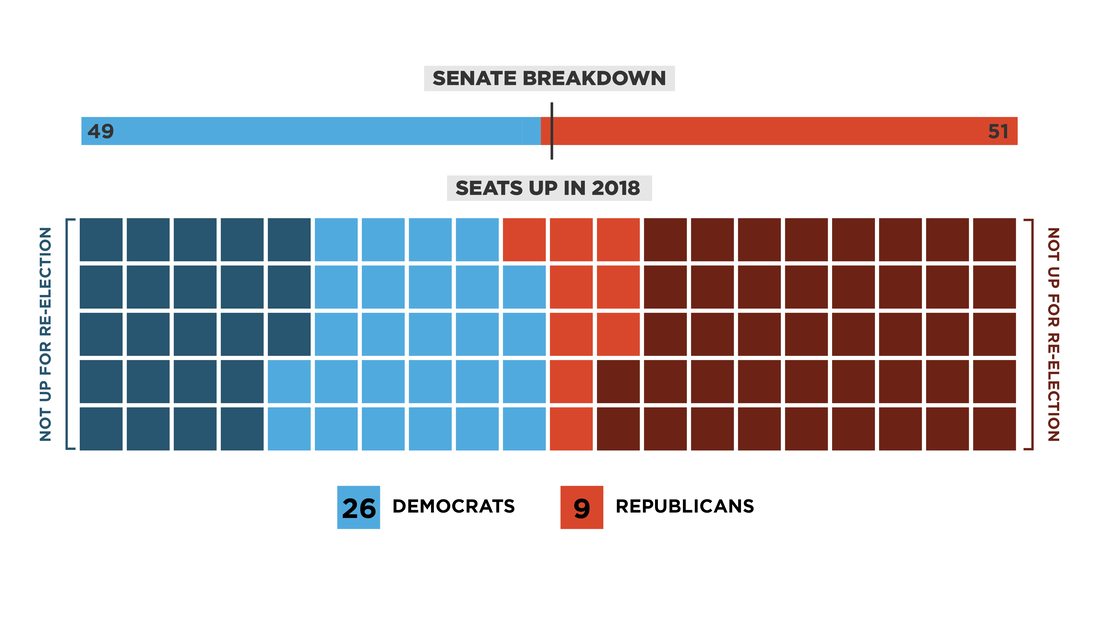 Republicans currently have a 51-49 majority in the Senate, with two independents caucusing with Democrats. Renee Klahr/NPR hide caption 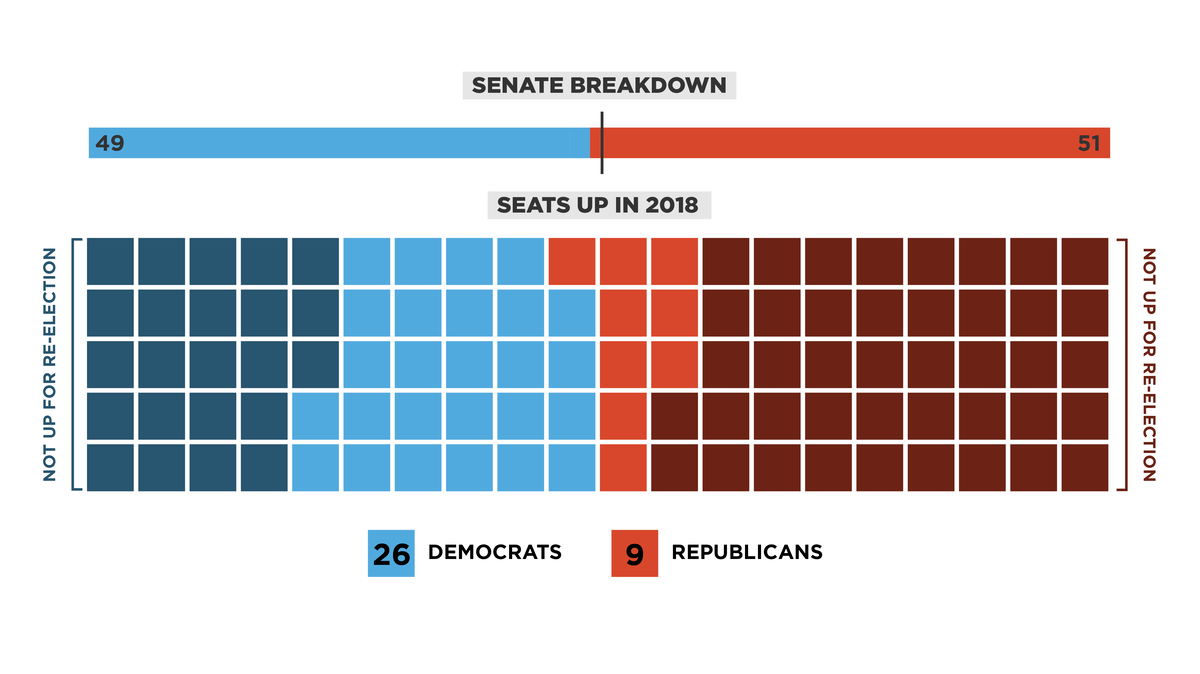 Republicans currently have a 51-49 majority in the Senate, with two independents caucusing with Democrats.

Republicans have their most favorable battleground in a generation as Democrats are playing almost entirely defense, with 10 incumbents up for re-election in states that President Trump won in 2016.

Some in the GOP were salivating at a five- or even six-seat gain at the outset of the cycle. But even the hugely favorable map hasn't been entirely immune to political gravity. Sensing a poor climate this year with Democrats energized against President Trump, several top GOP recruits passed on running, leaving Republicans with second- or third-tier candidates in many targeted races. Overall, only around half of those 10 Democratic seats are now considered truly competitive.

Republican leaders have thanked Democratic activists for their intense protest tactics over Kavanaugh's confirmation. Polling and campaign donations suggested that it awoke a dormant GOP base. The question is whether they can sustain that energy for the next month, but even a slightly more invested Republican electorate would ease concerns about the party's grip on Senate control.

Most likely to flip 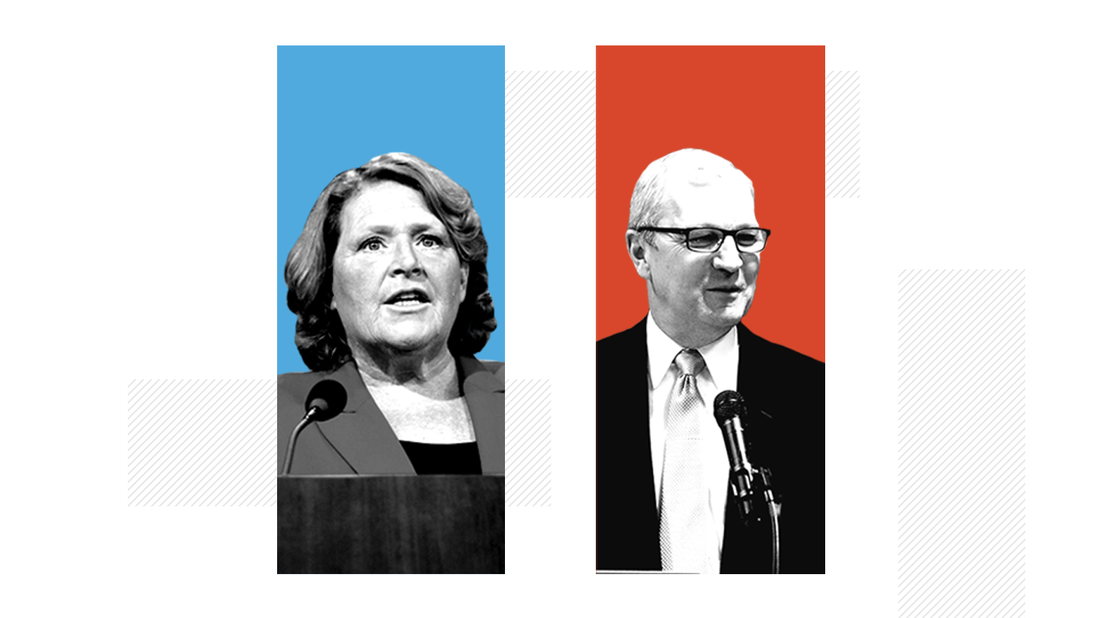 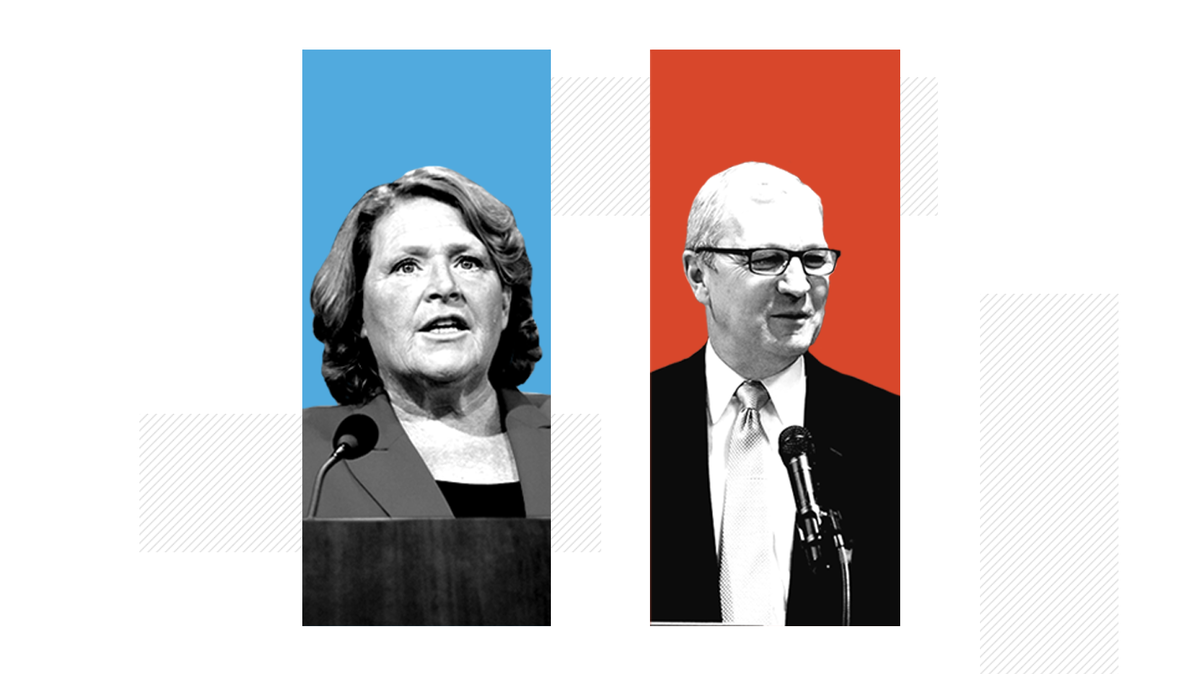 Both Republicans and Democrats pinpoint Sen. Heidi Heitkamp as the most likely to lose on Election Day. As a Democrat in a state that Trump carried by 36 points, Heitkamp may have sealed her fate with her vote against Kavanaugh. She filmed a video explaining her vote, pointing out that she voted for Trump's first Supreme Court pick, Justice Neil Gorsuch, but it may not matter. The state's at-large GOP Rep. Kevin Cramer hasn't run a stellar campaign to unseat her — especially with some questionable comments about Kavanaugh accuser Christine Blasey Ford and the #MeToo movement. Such remarks have derailed campaigns before, but in the polarized climate of 2018 it may not matter in such a GOP-heavy state. 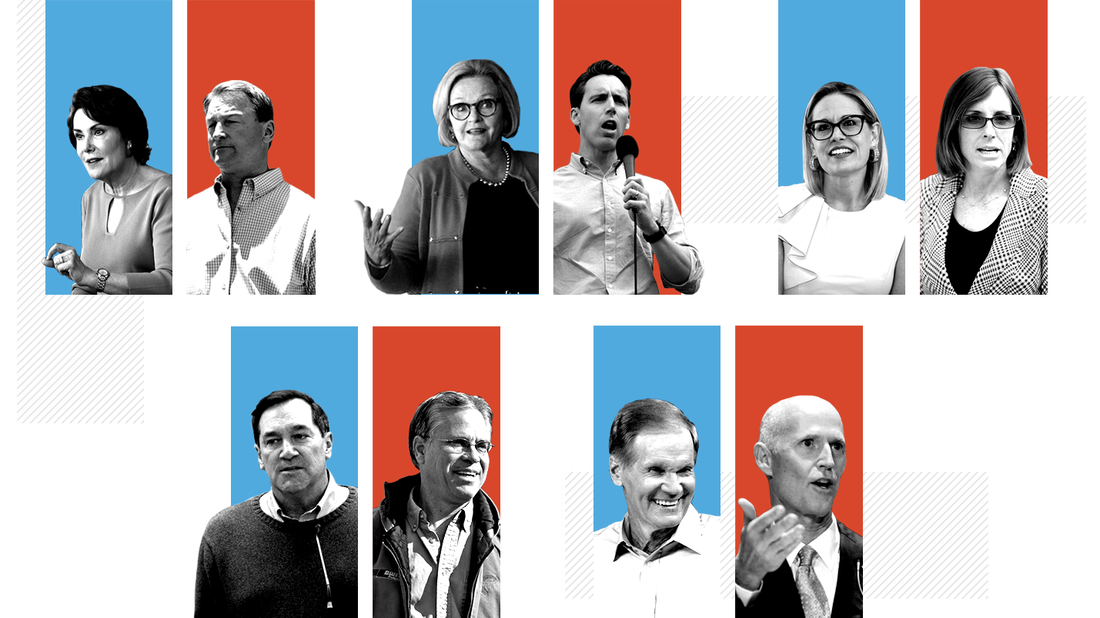 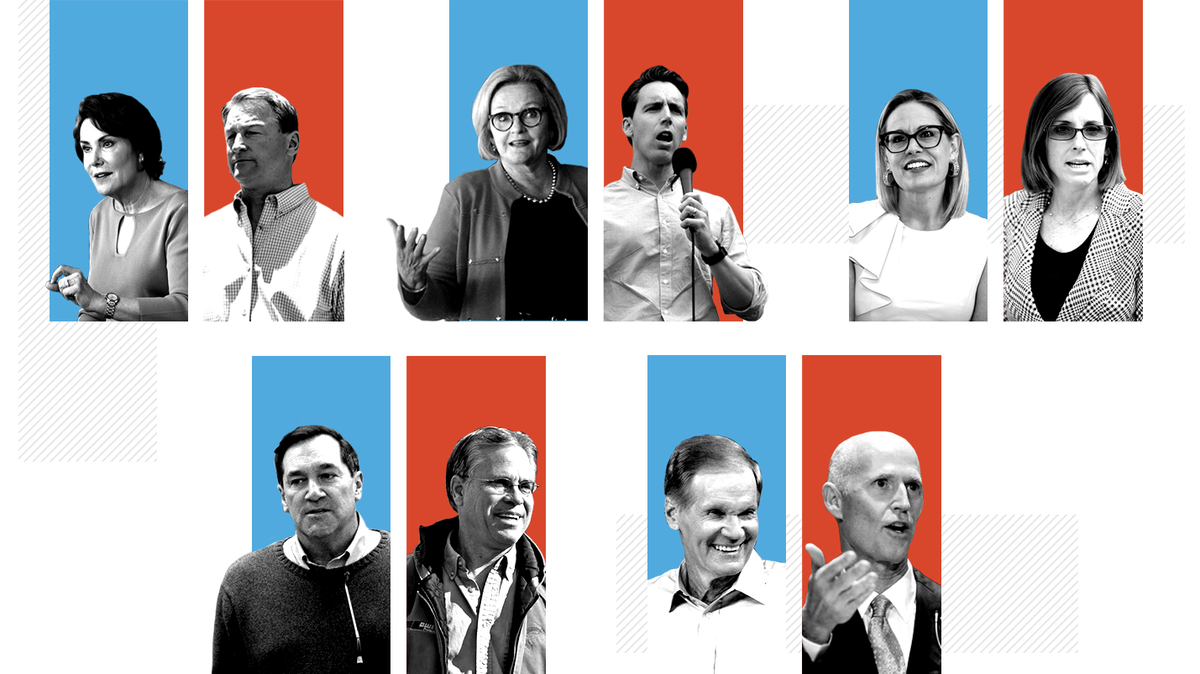 Sen. Dean Heller is the only Republican running for re-election this year in a state that Hillary Clinton carried, so he was always going to be highly vulnerable. At first, he looked like he could lose a primary after antagonizing Trump in the 2016 election. But the two mended their relationship, and the White House even persuaded Heller's chief primary challenger to run for the House instead. However, Heller has had to move to the right and cozy up to Trump in return, which could hurt him in the general election against freshman Democratic Rep. Jacky Rosen.

Republicans feel better about Heller's chances than they did earlier this year, and Rosen will need strong Hispanic turnout and union support from former Senate Majority Leader Harry Reid's vaunted political machine to win. An NBC News/Marist poll last week showed Heller with a 2-point lead but noted that the undecideds leaned Democratic and were anti-Trump, so Heller may have hit his ceiling. Voters don't seem overly enthused by Rosen, but the lean of the state could win out in this environment.

Democratic Sen. Claire McCaskill of Missouri lucked out in 2012, after her opponent made controversial comments about rape and abortion that derailed his campaign. Her 2018 opponent, state Attorney General Josh Hawley, has avoided any major gaffes, though Republicans early on were grumbling about the state of his campaign and fears that he would be closely linked to the disgraced former Gov. Eric Greitens, who resigned over a massive sex scandal in June.

Polls show this race is a dead heat. McCaskill voted against Kavanaugh, giving Hawley a fresh opening in the final weeks. It's also a state that has become a lesser battleground at the presidential level, where Democrats haven't won since 1996, and with Republicans also taking back the governorship when Greitens won in 2016.

Arizona Sen. Jeff Flake was sure to lose his GOP primary after refusing to fall in line with Trump, so he chose retirement instead. Luckily for Republicans, they still got their preferred nominee in Rep. Martha McSally, a retired Air Force colonel who was the first woman in U.S. history to fly a fighter jet in combat and command a fighter squadron. She still had to survive a bitter — and late — primary that forced her to the right to win, particularly on immigration issues. Democratic Rep. Kyrsten Sinema, who would make history as the first openly bisexual senator if elected, had a clear path. Sinema has positioned herself as a centrist Democrat, but McSally and Republicans have tried to chip away at her more liberal past when she was a state legislator, including her anti-war activism and calling herself a "Prada socialist."

This will be a close fight until the end. Arizona has been changing demographically. Trump carried the state by only 3 points in 2016, but he still dashed growing Democratic hopes of winning statewide, with the governorship and both Senate seats won by the GOP consistently for a decade.

Trump may have branded Indiana Democratic Sen. Joe Donnelly as "Sleepy Joe," but the fact that he has been able to hang on in a state Trump won by nearly 20 points speaks to his political skills, which Republicans privately admit they underestimated. Also, GOP strategists have grumbled that their nominee, Mike Braun, a wealthy businessman who defeated two congressmen to win the nomination, took his foot off the gas pedal after the primary and has been underwhelming. The result is a closer-than-expected contest where Donnelly just might hang on, despite his "no" vote against Kavanaugh.

While other Democratic incumbents were long preparing for their tough re-election challenges, Florida Sen. Bill Nelson was seen as the most sluggish. Strategists say they're now happy with the state of his campaign, but wealthy GOP Gov. Rick Scott immediately made this a top-tier contest when he jumped in. Republican optimism about a possible slam-dunk has faded since, and Democrats point out that Scott only narrowly won statewide twice in very good GOP years — which this year may not be. Florida is the ultimate swing state, and the governor's race, with the more energizing Democratic nominee Andrew Gillum, could help boost Nelson. This one may still end up being very close, just given the closely divided nature of the state, but Democrats feel a lot better about this race than they did earlier this year, while Republicans are more pessimistic. 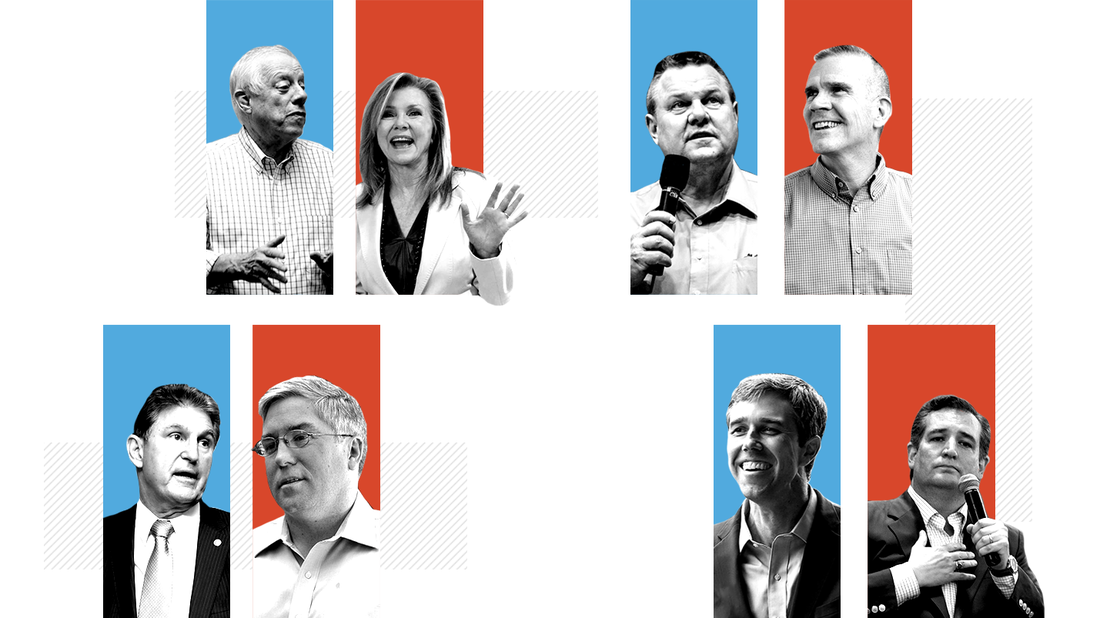 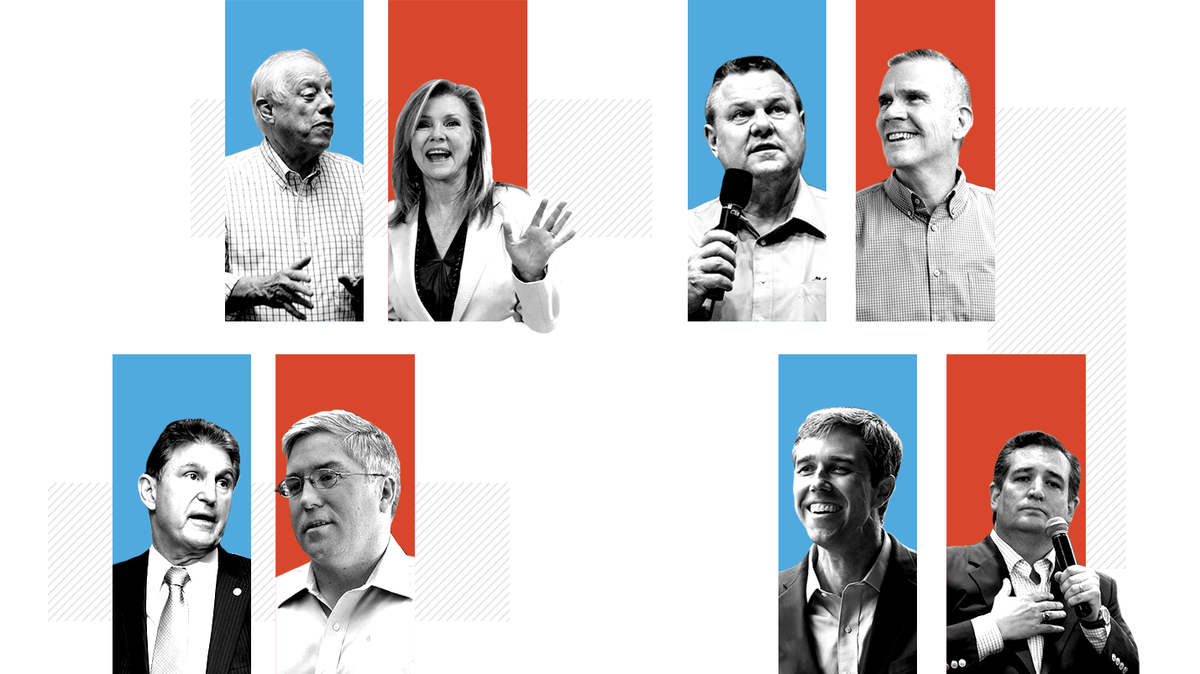 Tennessee's Senate race is competitive solely because Democrats were able to land a quality candidate in former Gov. Phil Bredesen, who carried all 95 counties when he was re-elected in 2006. He is a pragmatist more in the way previous Tennessee senators have been — including retiring GOP Sen. Bob Corker. But Rep. Marsha Blackburn, the GOP nominee, is a firebrand conservative, and this race is a test of whether candidates can trump party tribalism that has only grown in recent years. Blackburn and the GOP have hammered home that electing Bredesen — even if you may have liked him as governor — could mean handing control of the Senate over to Democrats. Bredesen is still popular, but his numbers appear to be coming back down after leading for much of the race. This is a place where the Kavanaugh hearings — even though Bredesen put out a statement saying he would have supported his nomination, too — may have have energized the Republican base at just the right time.

Montana Democratic Sen. Jon Tester is one of the incumbents who have proved their mettle repeatedly, and 2018 may be no different. Most Republicans are underwhelmed by their nominee, state auditor Matt Rosendale. But Trump is still very popular here, and he has a personal vendetta against Tester for having helped torpedo the nomination of Trump's personal physician, Ronny Jackson, to be veterans affairs secretary. However, Tester has a good brand in the state and a good record, especially on veterans' issues, so that message may ultimately fall short.

Of the Democratic incumbents in states Trump won, the president carried West Virginia by the largest margin — 43 points. But the established maverick brand of Sen. Joe Manchin, who previously served as governor, may still be able to overcome that. Republicans are increasingly pessimistic about their chances here, especially after Manchin became the sole Democrat to support Kavanaugh's nomination. Republicans say his re-election was probably a done deal before that, but his crossover only further solidified it for strategists, as they privately grumble that state Attorney General Patrick Morrisey has been a lackluster candidate. At first, Republicans were just happy the polarizing former coal executive Don Blankenship didn't grab the GOP nomination, but in hindsight now they wish they had put in more manpower to get a third candidate, Rep. Evan Jenkins, through the primary.

In Texas, Democratic Rep. Beto O'Rourke has generated plenty of grass-roots enthusiasm, eye-popping fundraising numbers and national attention with his unconventional campaign to unseat Republican Sen. Ted Cruz. And while Texas is a rapidly changing state, it may not have changed enough this year for an upset. It's still worth watching, though, because O'Rourke could help pull Democrats across the finish line in key House races in places like the Dallas and Houston suburbs by boosting turnout in more liberal areas. Cruz is a polarizing figure, including within the GOP, but O'Rourke may find that getting those final few points to topple him is still too big a challenge, blue wave or not.

The much longer shots 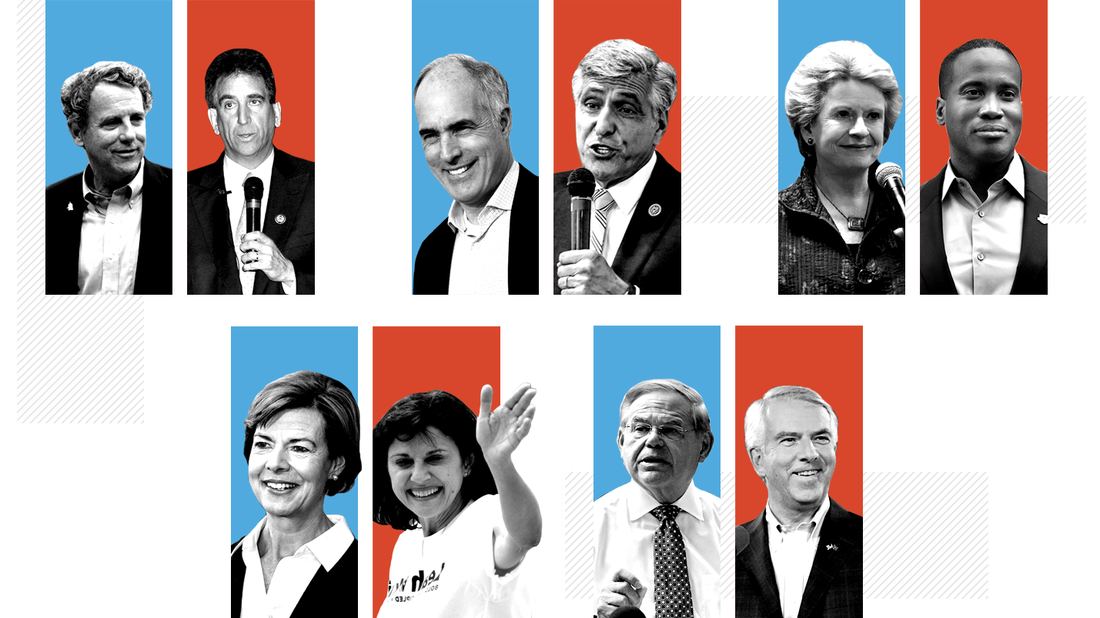 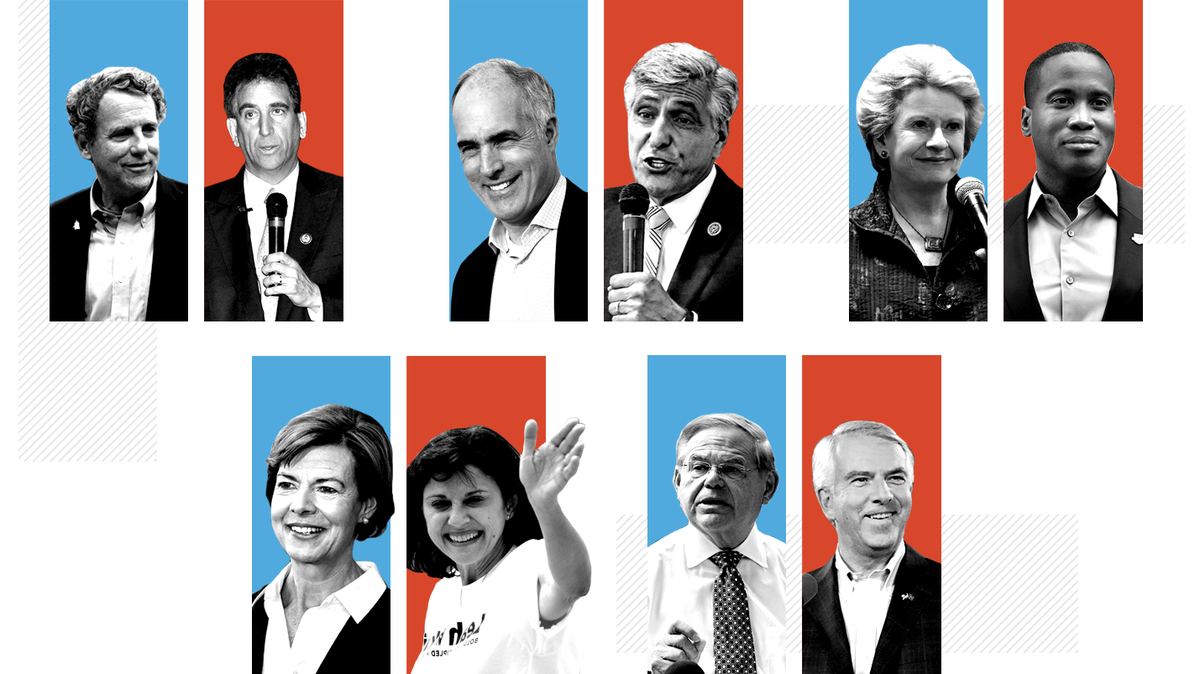 Four states with Democratic incumbents that voted for Trump — Ohio, Pennsylvania, Michigan and Wisconsin — have largely dropped off the target list for the GOP. In Wisconsin, Sen. Tammy Baldwin's numbers are somewhat weak, but Republican nominee Leah Vukmir still remains far behind her in polling. In Michigan, Republicans have been unimpressed with their nominee, John James, against Sen. Debbie Stabenow. Republican challengers in both Ohio and Pennsylvania haven't been able to truly put either Pennsylvania Sen. Bob Casey or Ohio Sen. Sherrod Brown on notice.

There is one more Democratic incumbent to watch, though. In New Jersey, Sen. Bob Menendez finds himself in a tougher-than-expected contest after a corruption trial last year. That resulted in a hung jury and an admonishment from the Senate Ethics Committee, and it dented his usually comfortable edge with voters back home. Still, it will take a lot for a Democrat to lose in New Jersey in the political environment of 2018.