Accessibility links
'Frederick Douglass' Is An Extended Meditation On The Legend's Self-Invention David W. Blight's opus manages to be both a celebration of a remarkable life and a sober reminder of the many ways in which our terrible times are shaped by those Douglass lived through. 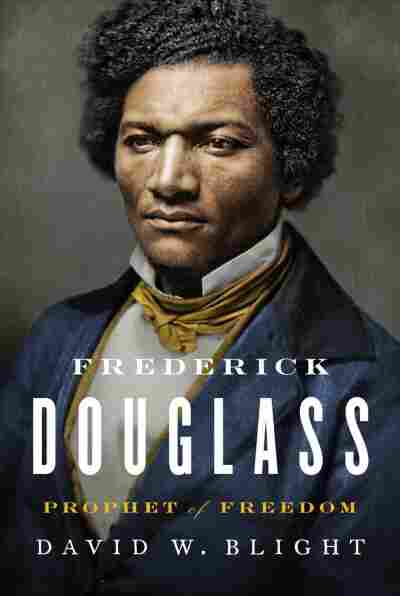 Frederick Douglass continues to be an irresistible subject for biographers because all of the nation's difficult, miraculous, unresolved creation myths seem to collapse into the single story of his life.

The scourge of slavery; the grace of individual liberty; the sanctity of the Constitution, women's suffrage; the transformative power of equal opportunity; the moral decency of the America experiment: All of this mythology threads its way through Douglass's life in contentious and illuminating ways that reflect the racial and political tensions that consumed the country then.

That so many of the problems Douglass identified and confronted 150 years ago remain difficult, urgent and unresolved today only adds to the allure of the story.

In Frederick Douglass: Prophet of Freedom, author and historian David W. Blight does not hide his admiration for his subject: "There is no greater voice of America's transformation from slavery to freedom than Douglass's," he writes in the early pages.

But Blight understands the very high bar he set for himself by choosing to write about a man who is most famous for writing so eloquently about his own life.

Blight succeeds in painting a portrait of Douglass that explains his monumental public achievements as well and his personal charms and shortcomings.

And maybe the greatest value of Blight's book is that it manages to position the singular individual personality that is Frederick Douglass in perfect relation to, and conflict with, the monumental societal injustices that both formed and animated the abolitionist.

"Douglass's experiences began to shape a disposition, a set of habits of mind, a personality that may have lasted all of his life," Blight writes. "He was forever in search of a sense of home, a concept he dwelled on at length in the autobiographies. He was capable of great love and compassion, but perhaps even more desperately in need of receiving love and compassion long into adulthood."

But as rich a target as Douglass is for a biographer, he presents significant hurdles for anyone interested in chronicling his life: What does one add to the life story of a man who has written three well-regarded autobiographies, and who made it his life's work to explain to America how its cultural and political folklore was in constant and tragic collision with its ugly reality?

Blight acquits himself well in this effort, paying a lot of attention to the man even as he burnishes the legend. And he acknowledges that he is working against great odds. "...the first major problem in writing Douglass's biography is that the subject himself is in the way."

Douglass mastered the powerful human drama of telling one's own story in one's own voice. He left little room for biographers to improve upon his work.

Blight accepts the challenge by choosing a path that focuses on Douglass as a storyteller, and his ability to tell and re-tell his personal story of slavery as a brief against the elaborate economic, social and especially religious infrastructure that supported and condoned slavery. Finding and then raising his voice against slavery, and keeping up the crusade for half a century has assured Douglass's place among in the secular canon of American liberty.

"In one way, "Blight writes, "this book is the biography of a voice."

What emerges is a man, a warrior, of raw brilliance devoted to the cause of abolitionism. But also a portrait of someone understandably anxious about his place in the world and distrustful of so many whom have declared themselves allies in the cause.

"In a sense he was forever hurt, and he did not take well to new hurts," Blight writes, "even if only perceived or imagined. From under those crisp white shirts worn under the frock coat, the hair on his head growing high and parted neatly, Frederick fashioned an elegance that usually kept his rage against slavery submerged in social settings. But it would burst out in his platform rhetoric, and sometimes privately at his closest companions."

In the end, this lavish, sprawling biography — 854 pages including notes and acknowledgements — is mostly an extended meditation on the prized and peculiar American penchant for self-invention and re-invention.

Douglass is an extreme early example of this kind of self-transformation. He rose from slavery to global abolitionist celebrity and advisor to the president, who would deliver Douglass the triumph of his life.

The Douglass legend in the catalog of American myth is that the runaway-slave-turned-abolitionist stole away from bondage on the Eastern Shore of Maryland and made his way in the world on sheer grit and determination, transforming himself from the most degraded life form at the bottom of the social ladder to someone at the very top. And, most deliciously, that he did it by stealing knowledge and learning from his enslavers, the Auld family who owned him.

"In the sordid history of American Slavery, few images are more powerfully ironic than that of Sophia Auld reading in what Douglass described as a voice of tranquil music while the slave boy lay asleep under the table near her feet," Blight writes.

At the emotional heart of the Douglass story is his incremental and unironic creation of an identity of freedom, and learning and accomplishment, despite the long odds, despite being born a slave. The three autobiographies allowed him total control over the creation and preservation of his own mythology. He grafted his life story into that of the larger American story by putting himself at the center of the most fractious questions facing the republic then, and maybe now: How do we fix the problem of race?

In the winter of 1864, slavery had been abolished. Douglass was now advising the president of the United States who had set his people free. It should have been a moment of triumph. But as the Civil War raged, a war Douglass referred to as "an Abolition War," the world's most famous abolitionist was still pleading a basic humanitarian case for equality and belonging:

"I end where I began— no war but an Abolition war; no peace but an Abolition peace; liberty for all, chains for none; the black man a soldier in war, a laborer in peace; a voter at the South as well as at the North; America his permanent home, and all Americans his fellow-countrymen."

It is hard to think of any single life that has more embodied the ethos of its time than that of Frederick Douglass. Blight asserts that how we use that legacy will determine who we are as a people in the future. His best example, of course, is Douglass — who used his past to invent a better future for himself and his country.