Accessibility links
'Brief Answers To The Big Questions' Is Stephen Hawking's Parting Gift To Humanity The physicist's posthumous book highlights his belief in the rationality of nature and in our ability to uncover its secrets — and a faith in science's ability to solve humanity's biggest problems. 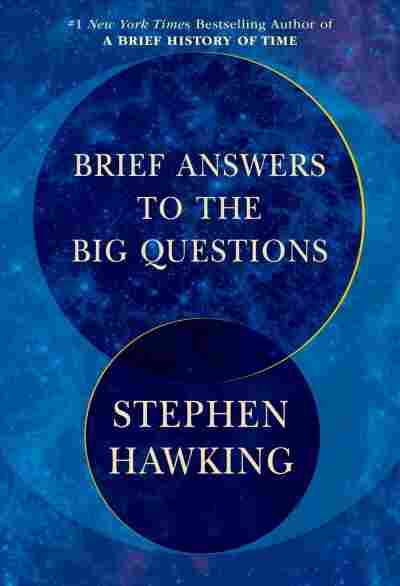 Brief Answers to the Big Questions

Stephen Hawking is one of those rare luminaries whose life symbolizes the best humanity has to offer.

His uncanny creativity as a theoretical physicist and his decades-long struggle with a horribly debilitating motor neuron disease (also known as amyotrophic lateral sclerosis or Lou Gehrig's disease) inspired millions to revisit their bonds with science and with their personal challenges.

Like Albert Einstein, he achieved superstardom while still alive, which is not something that happens to many scientists. The image of a brain traveling to the confines of space and time, diving deep into some of the biggest mysteries of science while imprisoned in a wheelchair, excited the public imagination.

Condemned by doctors to live a short life while still a young Ph.D. student in Cambridge, England, Hawking's long survival seemed like a miracle, even if he would never use such a word. "After my expectations had been reduced to zero, every new day became a bonus, and I began to appreciate everything I did have. While there's life, there is hope," he wrote. Hawking took the progressive deterioration of his body with tremendous dignity, raising a family, traveling the world, and even getting involved in some pretty saucy scandals and a messy divorce.

Contributing to the remarkable set of circumstances surrounding his life, Hawking was born exactly 300 years after Galileo's death (Jan. 8, 1642) and died in 2018 on Einstein's birthday, March 14.

Never to slow down, he left us with a precious parting gift: his posthumous book Brief Answers to the Big Questions, published Tuesday. It's the book every thinking person worried about humanity's future should read.

As a bonus, the book features a foreword from Oscar-winning actor Eddie Redmayne, who played Hawking in the movie The Theory of Everything; an introduction by Nobel Prize-winning physicist and Hawking's lifelong friend, Kip Thorne; and a deeply moving afterword from Hawking's daughter, Lucy.

The book is quintessential Hawking. He starts by addressing the questions in physics and cosmology that he dedicated his intellectual life to answer, using easy-to-follow arguments and drawing from everyday images and thought experiments. When the going gets technical, he doesn't try to overexplain, instead simply stating the facts as they are. This part of the book is a kind of state of cosmology survey, which no doubt gave him a sense of closure: This is how I see the world, my take on the big questions and how I contributed to the progress toward their solution.

The book includes 10 questions, starting with "Is There a God?" and ending with the very inspirational "How Do We Shape the Future?" Between these two, Hawking discourses on the existence of God (he denies it, with arguments that believers might find unconvincing while nonbelievers will take as essential atheistic gospel), on the origin of the universe and of life, on time travel, on what's inside black holes, on whether there is intelligent life elsewhere in the universe, on whether we can predict the future, on the real or imagined threats from aliens and artificial intelligence and so on.

If there is a unifying theme across the book, it is Hawking's deep faith in science's ability to solve humanity's biggest problems — be they in theoretical physics or the future of our species on Earth. His answers to the big questions illustrate his belief in the rationality of nature and on our ability to uncover all its secrets. His optimism permeates every page.

Hawking is a staunch defender of the search for a "theory of everything" in physics, an attempt to bring together the four (known) forces that govern how matter particles interact with one another into a single umbrella-like description. Hawking's enthusiasm is not deflated by the fact that many of the experimental signals for this theory have so far failed to materialize, despite active searches for the past four decades. "In 1980, I said I thought there was a 50-50 chance that we would discover a complete unified theory in the next twenty years. We have made some remarkable progress in the period since then, but the final theory seems about the same distance away. Will the Holy Grail of physics be always just beyond our reach? I think not."

To his mind, there has to be some underlying rational order to nature, one that is based on ultimate simplicity and symmetry. Still, given the experimental challenges to probe physics at the ultra-high energies where this unified behavior might materialize, he concedes that "to a large extent we shall have to rely on mathematical beauty and consistency to find the ultimate theory of everything." The ultimate nature of reality, then, would be an untestable construction of the human mind, a view that many scientists and philosophers consider very controversial. I have critiqued it elsewhere.

Although Hawking touches on the origin of the universe, the physics of black holes and some of his other favorite topics, his main concern in this book is not physics; it's humanity and its collective future. (His final paper on black holes was published last week.) Focusing his attention in the book on three related questions — the future of our planet, colonization of other planets and the rise of artificial intelligence — he charts his strategy to save us from ourselves.

Hawking argues that we are setting ourselves up for catastrophic failure. The rapid increase of the global population with the consequent need for ever more energy and food, our unstoppable encroachment into natural habitats, the huge amounts of air pollution due to the burning of fossil fuels, growing income disparity, cultural entrenchment — all of these combine into an explosive formula for disaster. Add to that the potential threat from nuclear weapons and the rapid rise of robotic and machine intelligence, and the future couldn't look any gloomier.

Only science, Hawking argues, can save us from our mistakes. We can develop technologies to sequester carbon more efficiently and to lower the cost of renewable energy; we can use genetic engineering to create foods that are cheap and highly nutritious, and to fight disease like never before; we can, even if not for decades or even centuries, start humanity's colonization of outer space using a lunar base as a stepping stone, then going to Mars and, eventually, to planets outside our solar system. The challenges we face are technical and not fundamental, hence potentially solvable, given enough time and resources: "We will transcend the Earth and learn to exist in space," he writes.

Hawking believes that humanity's evolutionary mission is to spread through the galaxy as a sort of cosmic gardener, sowing life along the way. He believes, even if not without worry, that we will develop a positive relationship with intelligent machines and that, together, we will redesign the current fate of the world and of our species.

Some may criticize Hawking's optimism and trust in humanity's wisdom and scientific prowess as naïve or too simplistic. To that he would probably ask, in his computerized voice and with a twinkle in his eyes, "And what would you suggest instead?"

His final words in the book are beautifully inspiring:

So remember to look up at the stars and not at your feet. Try to make sense of what you see and wonder about what makes the universe exist. Be curious. And however difficult life may seem, there is always something you can do and succeed at. It matters that you don't just give up. Unleash your imagination. Shape the future.

I can't think of a better prayer for each of us.

Marcelo Gleiser is the Appleton Professor of Natural Philosophy and Professor of Physics and Astronomy at Dartmouth, where he also directs the Institute for Cross-Disciplinary Engagement. His latest book is The Simple Beauty of the Unexpected: A Natural Philosopher on Search of Trout and the Meaning of Everything. You can follow his work at www.marcelogleiser.com.