Accessibility links
'Hey, Kiddo' Aims To Help Kids With Addicted Parents Feel Less Alone Jarrett J. Krosoczka was raised by his grandparents. The author and illustrator says he got a lot of practice telling stories as a kid — "making up excuses for where my biological parents were." 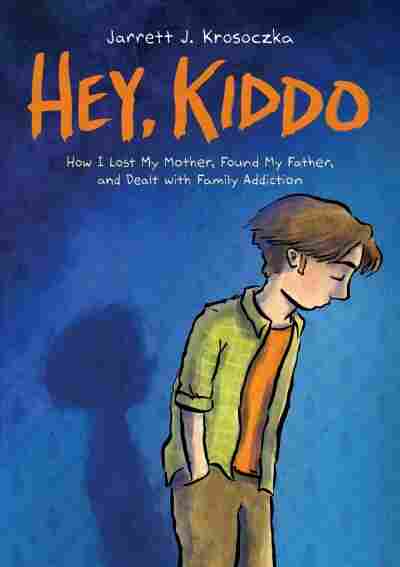 When author and illustrator Jarrett J. Krosoczka was in the fourth grade, his grandparents called him into the living room. "I remember thinking: Oh maybe we're going to go on another family vacation," he says. (The last time they called a family meeting he learned they were going to Disney World.)

But this wasn't that kind of family meeting. Krosoczka's grandparents had insisted on taking legal custody of him as a toddler — and they were about to tell him why.

"My grandfather sat me down on the couch," Krosoczka recalls. "And he said: 'It's time we tell you the truth about your mother. She's in jail and she's a drug addict and that's why she's been gone all this time.' "

Krosoczka had seen his mother only sporadically since age 2. He had never met his father.

Throughout his childhood, Krosoczka kept this painful information hidden. "I didn't tell anybody for the longest time ..." he says. "When you have these addictions in your families, you sort of live this duality. You have this thing that you hold back from people and you put your best face forward."

Krosoczka wasn't an athletic or social kid. Drawing was his refuge, his way of making friends, and his way of dealing with life. "Maybe that's [where] my storytelling skills began," he says. "By my making up excuses for where my biological parents were."

As an adult, Krosoczka became a graphic novelist — publishing books for young readers such as the "Lunch Lady" and the "Platypus Police Squad" series. He considered writing about his own life, but worried his story was too dark.

It wasn't until he began meeting young fans with similar life stories that he changed his mind. Krosoczka's new book Hey, Kiddo, tells the story of his mother's addiction and incarceration from the point of view of his 17-year-old self.

"It took a long time for me to gain that courage to make this book ..." he says. "I feel like I owe it to these readers to put myself out there."

On a chance meeting at a book signing in his hometown

A woman came through the line with her children and ... after they got their books signed ... they were chatting with their friends. They didn't realize they were within earshot of my wife, Gina, and this woman said: "You know, the last time I saw him he was a baby. I was his mother's parole officer and I went [to] the house to do a wellness check. He was a baby crying alone in his crib by himself. No one else in the house." ...

So it's wild. There were certainly moments when I was in more physical jeopardy than I ever realized. But thankfully while I didn't have my birth parents to take care of me, I had other family members who took care of me as if they were my parents. 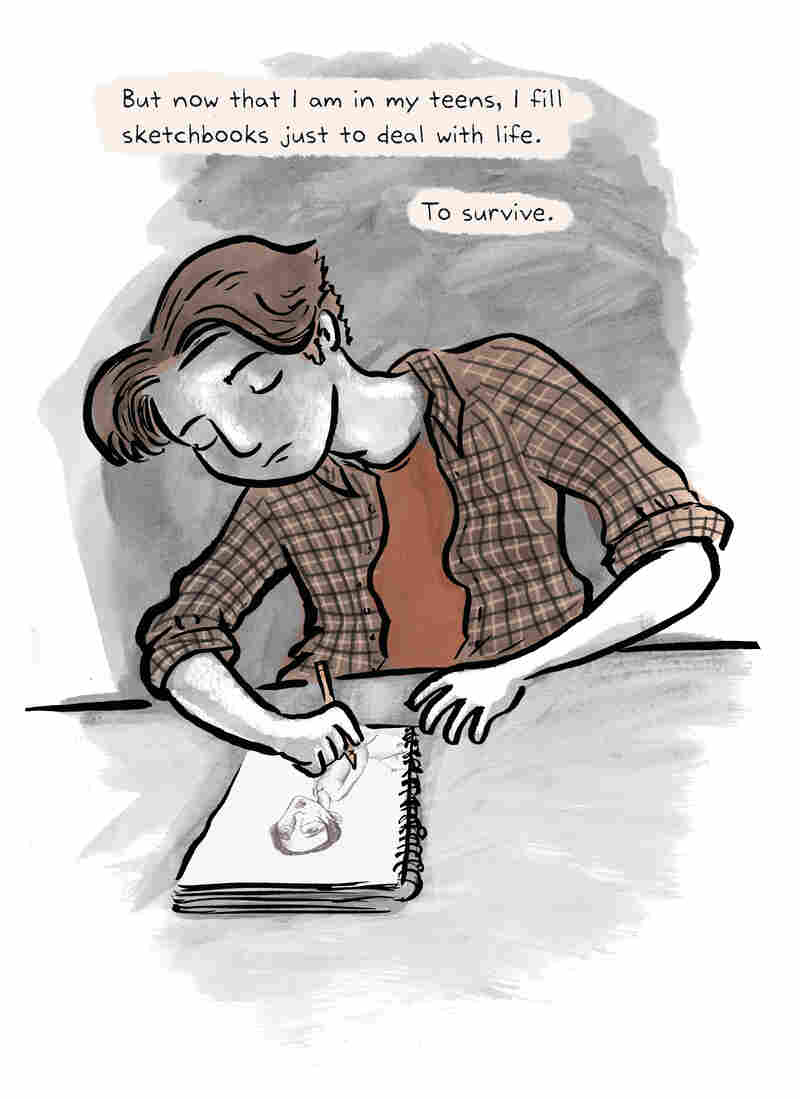 "When I was a kid, I'd draw to get attention from my family," Krosoczka writes in Hey, Kiddo. "In junior high, I drew to impress my friends. But now that I am in my teens, I fill sketchbooks just to deal with life. To survive." Courtesy of Jarrett J. Krosoczka/Scholastic/Graphix hide caption 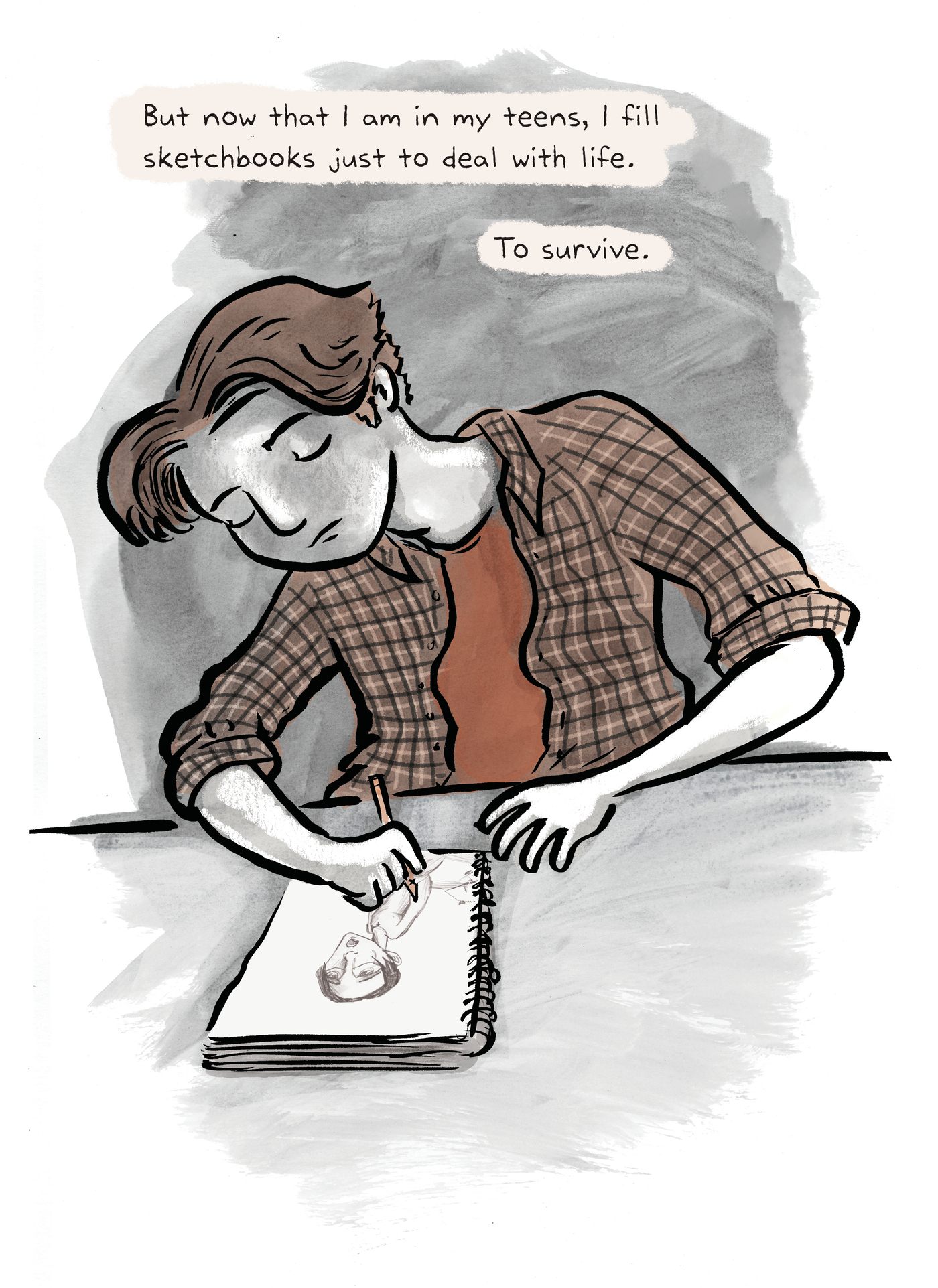 "When I was a kid, I'd draw to get attention from my family," Krosoczka writes in Hey, Kiddo. "In junior high, I drew to impress my friends. But now that I am in my teens, I fill sketchbooks just to deal with life. To survive."

On communicating with his mother through drawing

My mother was a very talented artist and when she was incarcerated she would send me letters and she would draw cartoons for me. And a big part of how we communicated for many years was through art. So she would draw me Snoopy and then she would request maybe I draw her the Pink Panther. So then I would draw her the Pink Panther and then I would write back and request Garfield. And I remember as a very young person seeing how talented she was. But she had squandered that talent because of the drugs. And that really was my driving force to want to get published.

On the last years of his mother's life

I saw her at a book event of mine — she had all of these track marks on the back of her hand and on her arm and she blamed it on the dog jumping up on her. But I just knew. In my heart I knew. ... She started getting arrested again. ... I really had to put some distance between us at that point. You know, I had a 3-year-old, a newborn, and they needed their dad, and I needed to be fully there for my children. ...

I'd wake up in the middle of the night thinking what if what if I'm wrong? What if she really isn't using? ... She knew I was writing what would become Hey, Kiddo. And I was getting to the point where I thought ... I'm [far enough] along in the editorial process where I'm really going to need to talk to her about what I'm writing about. ...

I received a phone call one night. It was March of 2017 ... and it was her younger brother Stephen and he informed me that she had died of a drug overdose — OD'd on heroin. It was heartbreaking to be right. It affirmed for me I did what I needed to do to protect my new young family.

On telling his 9-year-old daughter, Zoe, about his mother

Hey, Kiddo has been the sort of the forbidden fruit in our house. [My daughter] really wanted to read it. ... So I sat down with her and I explained to her a lot of the aspects of this book before she would read it. And also made sure she read it before the book was published so a classmate didn't come in and say, "Oh, I know this about your family" and she didn't.

How Can Mentors Turn An Uncertain Journey Into A Heroic One?

On how he feels about his mother's drug addiction now, as an adult

She wasn't able to help herself throughout her life. She just kept going back to it. The one thing that I do still have a heavy heart for is she was never able to take ownership. So, yes, she had a disease and, yes, she suffered from addiction, but she was never able to say, "Oh yeah, sorry about that." Even as an adult she'd say, "You had everything you needed. When are you just going to get over it?"

Sure, I had Nintendo, and I had all of these G.I. Joes and Thundercat action figures. But I didn't have her. And the tough part is — knowing who she was and what her heart was — that she would have been such a good mother and such a great grandmother if she had the whereabouts to do that.

I've come to recognize the looks that people will give me right before they are about to share information with me. That typically happens now at a book signing where someone will come up with their book, and they'll explain who this book is for, and they'll be overcome with emotion. And I'm there for that, and I'm present for that. They give me this grief. And I'm able to compartmentalize and leave it there at the bookstore. That sense of responsibility is what led me to really dig deep to make this graphic memoir.

Silly books are really important. ... I've written this heavy book, you know, it's getting a sticker on it because it's a finalist for the National Book Award. But I made a name for myself writing these silly "Lunch Lady" books and now also the "Jedi Academy" books and there are lots of people who come up to me to say: "You know what? THESE books really helped save my kid because they needed an escape."

Sam Briger and Thea Chaloner produced and edited the audio of this interview. Bridget Bentz, Seth Kelley and Beth Novey adapted it for the Web.