Accessibility links
Federal Deficit Jumps 17 Percent As Tax Cuts Eat Into Government Revenue The federal deficit ballooned to $779 billion in the fiscal year just ended — a remarkable tide of red ink for a country not mired in recession or war. 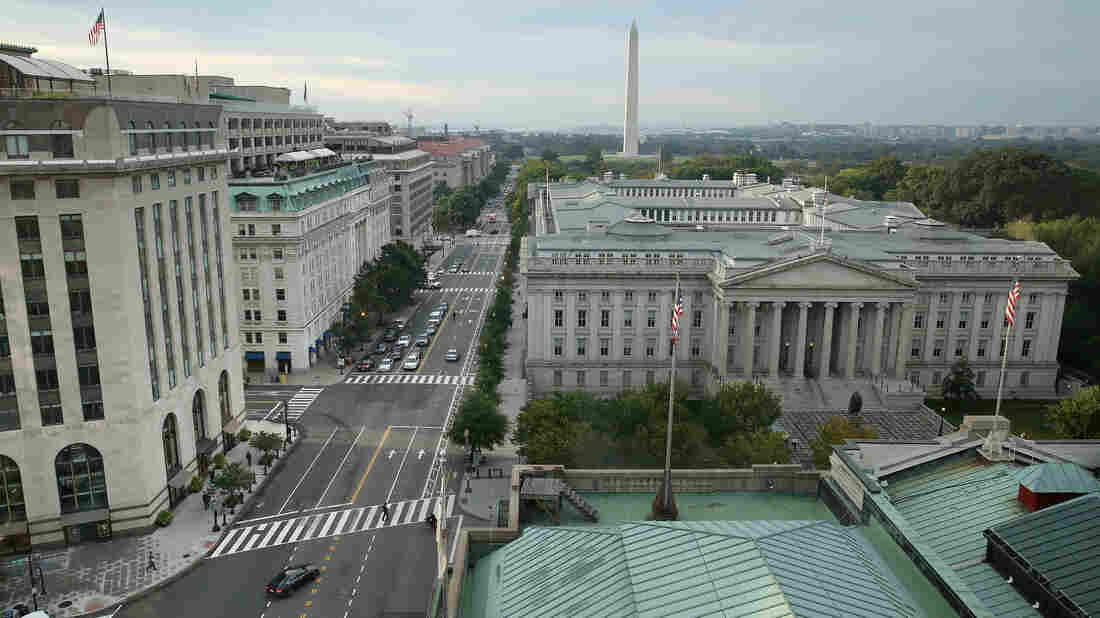 Treasury Building in Washington, D.C. The trend toward rising red ink was widely anticipated, given the GOP tax cuts and other government policies, including the president's demand for beefed-up military spending. Chip Somodevilla/Getty Images hide caption 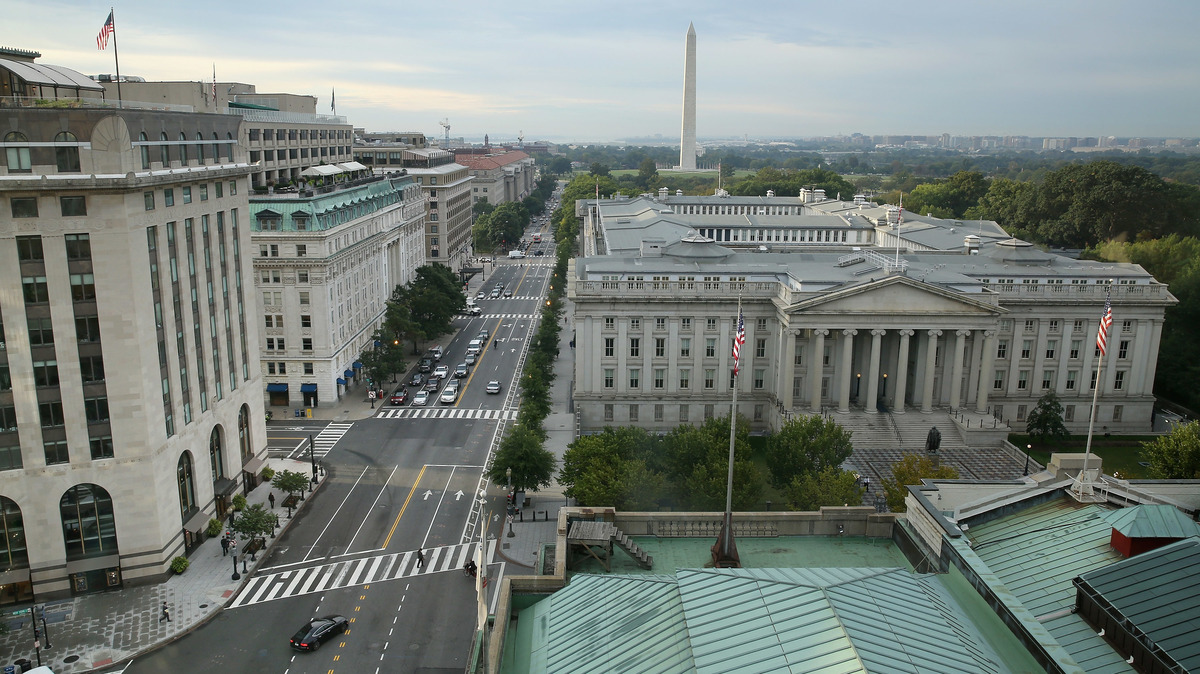 Treasury Building in Washington, D.C. The trend toward rising red ink was widely anticipated, given the GOP tax cuts and other government policies, including the president's demand for beefed-up military spending.

The federal deficit ballooned to $779 billion in the just-ended fiscal year — a remarkable tide of red ink for a country not mired in recession or war.

The government is expected to borrow more than a trillion dollars in the coming year, in part to make up for tax receipts that have been slashed by GOP tax cuts.

Income taxes withheld from individuals grew by 1 percent. Overall tax receipts were flat. As a share of the economy, tax receipts shrank to 16.5 percent of GDP, from 17.2 percent the previous year.

"The president is very much aware of the realities presented by our national debt," said White House budget director Mick Mulvaney.

He insisted that accelerating economic growth will eventually help fill the deficit hole, though so far there's little evidence that growth is finding its way to government coffers.

The White House also argued that government spending is to blame for the yawning deficit, even though spending rose just 3 percent during the fiscal year and spending as a share of the economy actually shrank.

"This fiscal picture is a blunt warning to Congress of the dire consequences of irresponsible and unnecessary spending," Mulvaney said in a statement.

"There's been a bipartisan reluctance to tackle entitlement changes because of the popularity of those programs," McConnell said in an interview with Bloomberg. "Hopefully at some point here we'll get serious about this. We haven't been yet."

McConnell's comments drew a swift rebuke from the top Democrat in the Senate, Chuck Schumer, D-N.Y., who blamed the rising deficit on Republicans' "tax cut for the rich."

"To now suggest cutting earned middle-class programs like Medicare, Social Security, and Medicaid as the only fiscally responsible solution to solve the debt problem is nothing short of gaslighting," Schumer said.

The fiscal year-end report from the Treasury Department was broadly in line with White House and Congressional projections. Although White House economic adviser Larry Kudlow falsely claimed in June that the deficit was coming down, the trend toward rising red ink was widely anticipated.

"As expected, recent tax cuts and spending increases — all put on the national credit card — are making a bad problem even worse," said Maya MacGuineas, president of the Committee for a Responsible Federal Budget.

"Those elected to Congress this year will face stark and difficult choices to put the debt on a downward path and protect our nation's social programs from insolvency," MacGuineas said. "It's no longer a problem for the future."

President Trump has complained repeatedly that the Federal Reserve is raising interest rates too quickly.

"My biggest threat is the Fed," Trump said Tuesday in an interview with the Fox Business Network. "The Fed is raising rates too fast. And it's independent, so I don't speak to [Fed Chairman Jerome Powell]. But I'm not happy with what he's doing."

The current spike in the deficit at a time of strong economic growth and low unemployment represents a break with that historical pattern.

The last time unemployment was this low — in 1969 — federal government ran a small surplus.