Derrick Slaughter attends a July 14, 2017, march through the streets of Norwalk, Ohio, against the epidemic of heroin, with his grandmother (not shown). Both of Derrick's parents are heroin addicts and he is now being raised by his grandparents. Spencer Platt/Getty Images hide caption 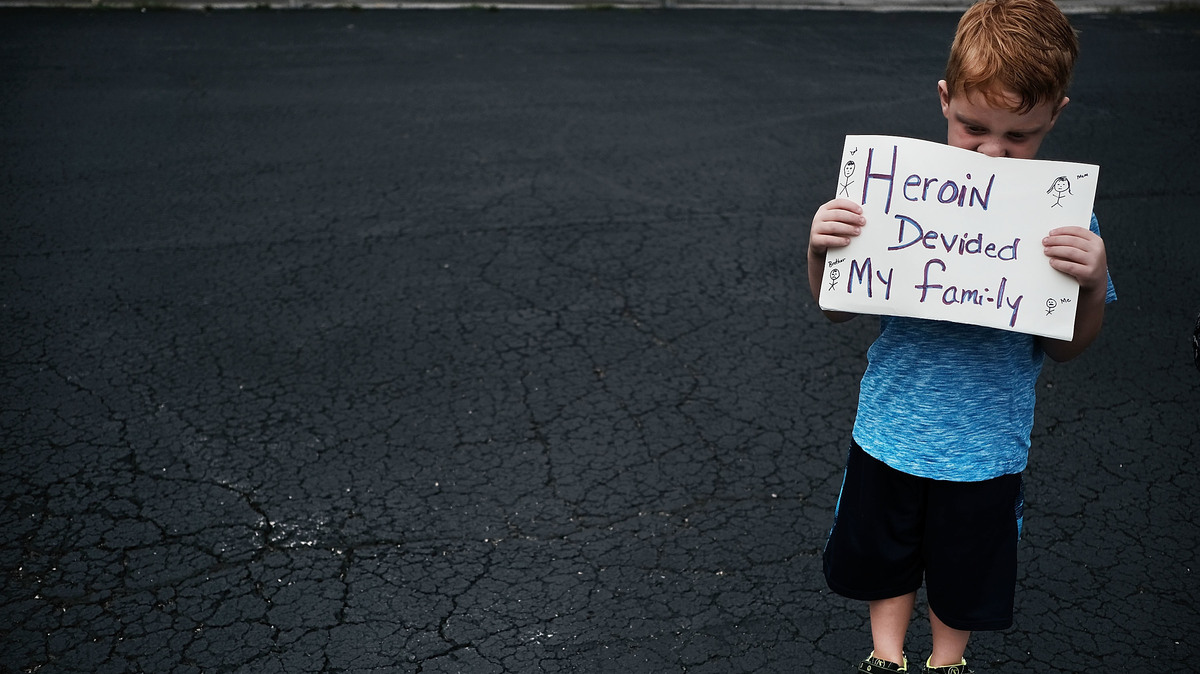 Derrick Slaughter attends a July 14, 2017, march through the streets of Norwalk, Ohio, against the epidemic of heroin, with his grandmother (not shown). Both of Derrick's parents are heroin addicts and he is now being raised by his grandparents.

Rural Americans are profoundly worried about the opioid crisis and their local economies and many are hoping government can help, according to a new poll from NPR, the Robert Wood Johnson Foundation and the Harvard T.H. Chan School of Public Health.

One-quarter of rural Americans say opioid and other drug abuse is the biggest problem that faces their local communities. A similar share, 21 percent, say economic concerns are the biggest problems in their areas. No other topic even comes close after that. "People" and "government" are the next biggest problems, both registering at 5 percent.

Don't see the graphic above? Click here: What would you say is the biggest problem facing your local community?

"In a country that has just been focusing for a number of years now on the economic problems facing people living in rural America, the fact that the opioid drug abuse epidemic literally is either the same or even, for many people, more serious than economic issues is an extraordinary finding," said Robert Blendon, professor of health policy and political analysis at Harvard's T.H. Chan School of Public Health.

When it comes to fixing those problems, Clinton voters (72 percent) were more likely than Trump voters (51 percent) to say that their communities would need outside help.

Between those groups, there is perhaps less difference than their political ideologies would suggest.

Among rural Americans who say their community will need outside help to solve its major problems, similar proportions of Trump voters (about 6 in 10) and Clinton voters (7 in 10) believe that federal, state or local government will "play the greatest role."

The major difference between these groups is the role they see for big business — and even then, the difference is modest. Among those who say their community will need outside help, Trump voters are more likely than Clinton voters (18 percent versus 8 percent) to say they think big businesses will play the greatest role.

The opioid problem is not viewed uniformly across all of rural America. Opioids and other drug abuse rate with an especially high share of people in Appalachia — 41 percent of people there said drug addiction and abuse are the biggest problem in their communities, compared with around 1 in 5 in the Midwest, and around one-quarter in the South and rural areas nationally.

Don't see the graphic above? Click here: What would you say is the biggest problem facing your local community?

This finding is particularly striking, as drug abuse barely registers on many Americans' views of what the biggest problems in the nation are. Drugs register at 1 or 2 percent on Gallup's regular poll of the "most important problem facing the country today."

Indeed, there are multiple instances in which rural Americans' worries about their local problems differ from national views about the country's problems.

For example, less than 1 percent of rural Americans listed immigration as the "biggest problem" in their community. However, it is regularly one of the top issues that Americans list on that Gallup Poll — right now, it's at 12 percent, and as recently as July (the period when this poll was conducted), it was the top issue.

In fact, it's not all that unusual for local and national priorities to differ, Blendon said.

For example, "a number of polls have Republican voters [saying] terrorism is the top issue, or immigration," Blendon said. "It doesn't show up when you ask people about their own lives or their own communities."

Likewise, Blendon pointed to 2017 polling that showed Americans believed schools nationally were in crisis, but that people also largely thought their local schools were doing fine.

While a divide between perceived local and national problems may be commonplace, poll findings like these nevertheless hint at the immense power that media and political figures could have in shaping people's perceptions of national problems.

"People really listen to the national news, the national politicians, and they form views about what sort of threatens the country," Blendon said. "But they may not be their own experiences at all."

Altogether, it appears that while those national priorities like terrorism or immigration filter into rural Americans, pressing rural problems like the opioid epidemic have more trouble percolating out to the rest of the nation.

The poll also shows Trump voters in rural areas are significantly more upbeat about their lives on a number of measures than rural Clinton voters.

That may simply be a reflection of a broader, nationwide phenomenon, where Republicans have since the 2016 election viewed the economy much more positively than have Democrats. This often tends to reflect who's in the White House — Democrats likewise felt more positive about the economy during the Obama years.

"What you usually get is, when you talk about the national situation, it does reverse with who is the president. But here we're asking them about are they better than their parents or their local community," Blendon said.

Recent polling shows that Republicans' assessments of their own finances dropped somewhat during the Obama presidency and increased in the past couple of years. However, those swings are far less dramatic than their views of the national economy. (Democrats' views, meanwhile, held relatively steady throughout that period.)

Roughly 6 in 10 rural voters backed Trump in 2016, according to exit polls.

"The picture of a lot of post-election coverage was that the Trump voters were there because they felt so badly about the economic situation for them in their community," Blendon said. He feels that these data could point to a more nuanced narrative about why rural voters voted the way they did in 2016.

The poll was conducted June 6 through Aug. 4 and sampled 1,300 U.S. adults via telephone. The margin of error for the total respondents is +/- 3.6 percentage points.