Accessibility links
A School In Raqqa, Syria, Helps Children Traumatized By War "What we found is children had been so traumatized, they couldn't even recognize numbers or letters," says a U.S. official. "We had to work through that before we could start educating them again." 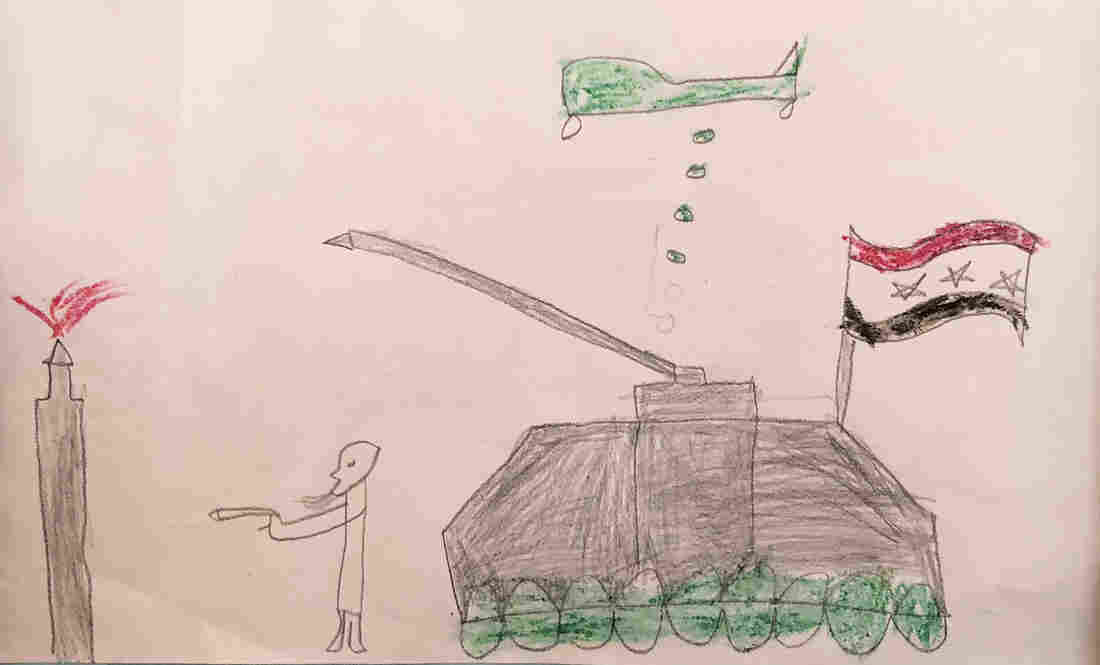 A child's depiction of ISIS destroying his family's home in Raqqa, Syria. "This is when ISIS shelled my home," he says. "My sister and niece were killed. Just like that, two missiles." Greg Dixon/NPR hide caption 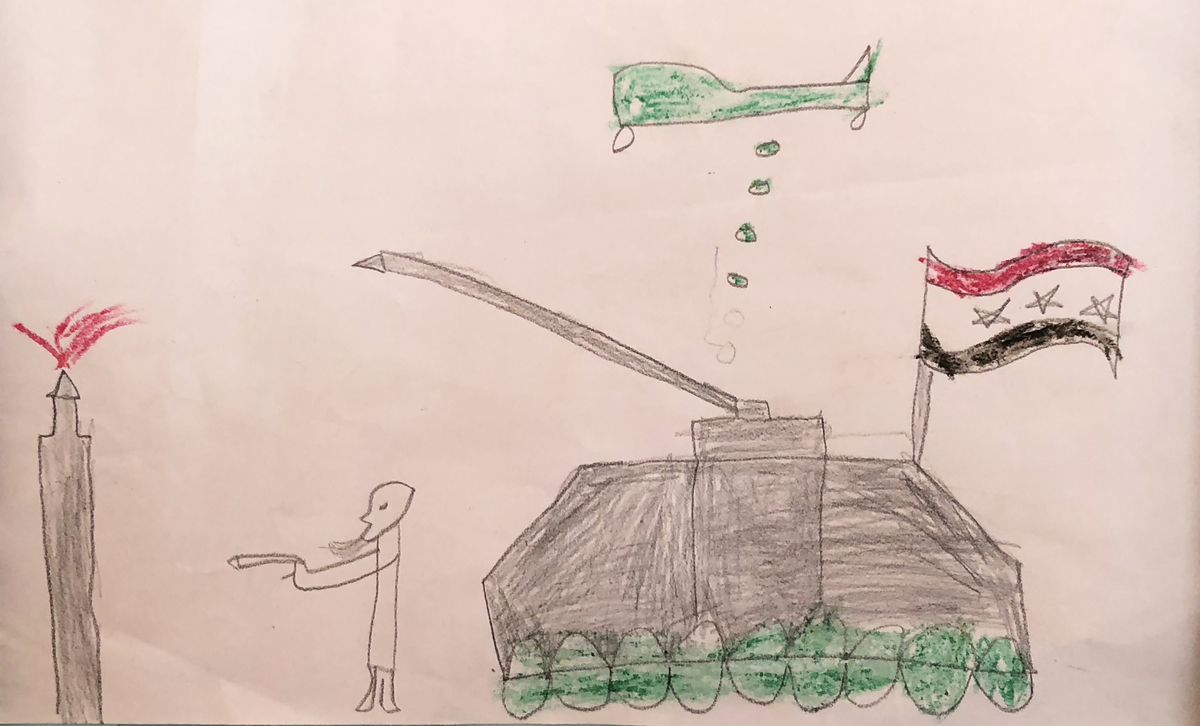 A child's depiction of ISIS destroying his family's home in Raqqa, Syria. "This is when ISIS shelled my home," he says. "My sister and niece were killed. Just like that, two missiles."

The skinny boy says he's 12, though he looks years younger. He points to a crayon drawing he created this summer, when he arrived at a U.S. government-supported childcare center in Raqqa, Syria.

It's mostly colored in black. There's a tank. An aircraft. A crude figure of a man with a wispy beard holding an oversized gun.

"This is when ISIS shelled my home," he says. "My sister and niece were killed. Just like that, two missiles."

In the picture, there's a red tongue of flame rising from the roof of his home.

"When the house was hit, the smoke was red like this," he says.

Therapists have known for decades that a primary way young children communicate and comprehend trauma is by drawing pictures. If that's true, these drawings on the wall are one collective scream.

There are childish scrawls of beheadings. Corpses. Planes dropping bombs. One small boy gestures to the picture he made. His eyes are pinched by burn scars.

This school, along with 10 others like it, is designed to ease the kids back into something like a normal life.

"It's everything from art to music to sports," says Deanie Holder, a State Department official who helps oversee the childcare centers in northeast Syria, an area controlled by U.S. forces and its Kurdish and Arab allies.

"What we found is the children had been so traumatized, they couldn't even recognize numbers or letters," Holder continues. "So we had to work through that before we could start educating them again."

The school's outer walls are painted with colorful bears and balloons. It sits just a block or two from piles of rubble and the skeletons of buildings, destroyed by Islamic State booby traps and American airstrikes. There are about 500 kids here, some of them orphans, with space for hundreds more. 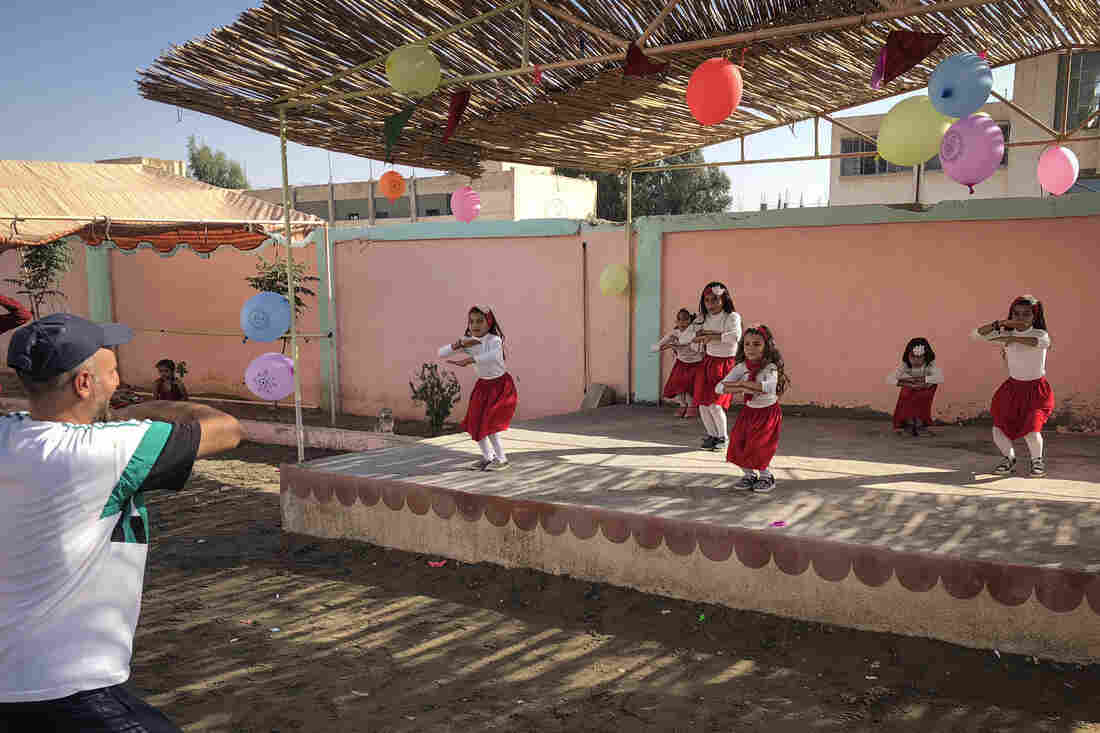 Schoolchildren are led through a dance routine at a U.S. government-supported childcare center in Raqqa. Greg Dixon/NPR hide caption 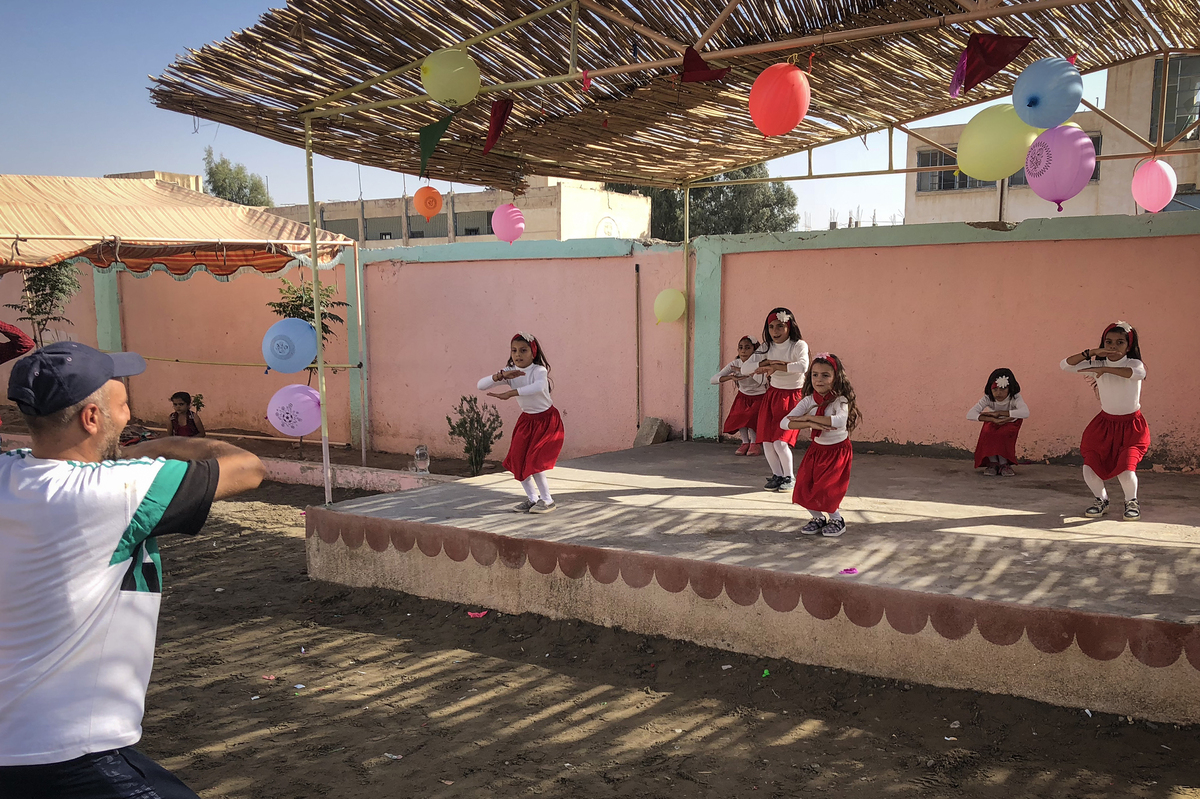 Schoolchildren are led through a dance routine at a U.S. government-supported childcare center in Raqqa.

A Syrian teacher instructs a small class, just seven boys and girls who never went to school during the years of war. NPR is not identifying any of the Syrians for security reasons.

Through an interpreter, the teacher says the children were afraid to be inside any building or even on the roads. They just didn't feel safe because of the bombings and destruction they witnessed.

"First, they were still carrying memories of the war," says the teacher. "And they had lost people close to them. Some had lost their fathers; some had lost both their parents."

She points to two girls in the back of the room. One stares blankly at the floor, thumbing the pages in her book. The other covers her face with her hands, peering through a web of fingers at the visitors in the room.

"They had an obvious case of social isolation," the teacher says.

In the beginning, they didn't talk to anyone.

One boy in the class lost both his legs and sits in a wheelchair. Another is 13 and lost his left hand. He smiles from the front row of the class and waves at the strangers, showing off his notebook.

He and two other children were playing with a bomb, he says. When it exploded, it killed both his friends.

Holder says the schools like this are part of a program that costs about $13 million. But U.S. funds will run out in just four months and it's unclear whether more money is coming.

President Trump cut $200 million in aid a few months back — about half the U.S. stabilization money for all of northeast Syria — saying he wanted other countries to contribute. State Department officials pleaded with the White House to restore at least part of the aid, saying they wanted $70 million for critical projects. In the end, they got less than $7 million to support the White Helmets, the Syrian civil defense force that helps civilians.

So how did those cuts affect the education efforts?

"Basically, part of the education programming money was tied up in the money that was stopped," says Holder. "So instead of having a full year coming up, I will basically end funding at the end of January."

Holder says there's hope from other countries who are contributing aid money.

"We're working very hard with the international community to explain the many different ways they could be involved in the education sector," she says.

The United Arab Emirates gave $50 million, but prefers the money to be spent on projects like restoring water service and electricity. Back in August, Saudi Arabia promised to provide $100 million for stabilization in Syria. Those funds came just this week, officials said, when Secretary of State Mike Pompeo visited Riyadh.

While officials say the Saudi money will go toward a number of programs, including education support, it's uncertain at this point whether any of that funding will be able to keep this and other schools open.

For $1.5 million, Holder says, she could renovate 100 Iraqi schools. For about $5 million, the care centers could continue for another year.

Whatever the fate of these schools, there are signs of hope. Girls in red and white uniforms perform a dance routine on a stage. The boy who lost his hand in an explosion shows a picture he just drew in his notebook. It's a bouquet of flowers.

And that boy whose black crayons pictured an ISIS fighter and the burning home the family left to flee to Lebanon? He's made a picture of his new home.

"I was so happy I drew this," he says. "This is when we returned. We rebuilt our house and now we are very happy." 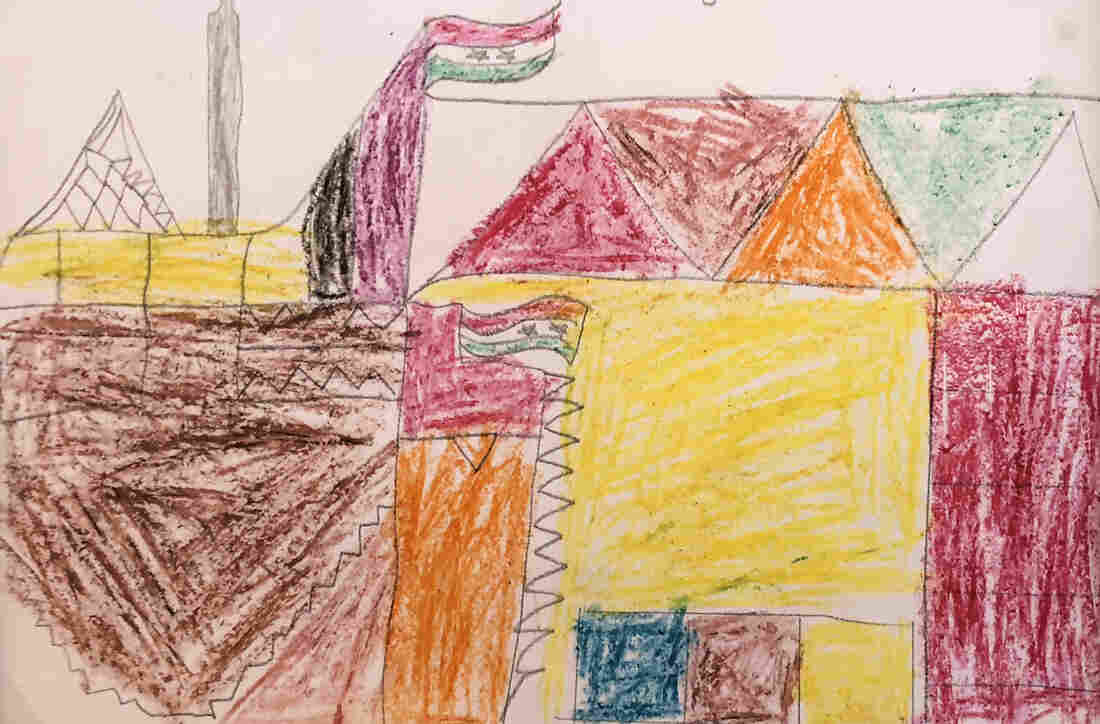 A drawing by the same child whose home in Raqqa was destroyed by ISIS depicts the family's rebuilt house. Greg Dixon/NPR hide caption 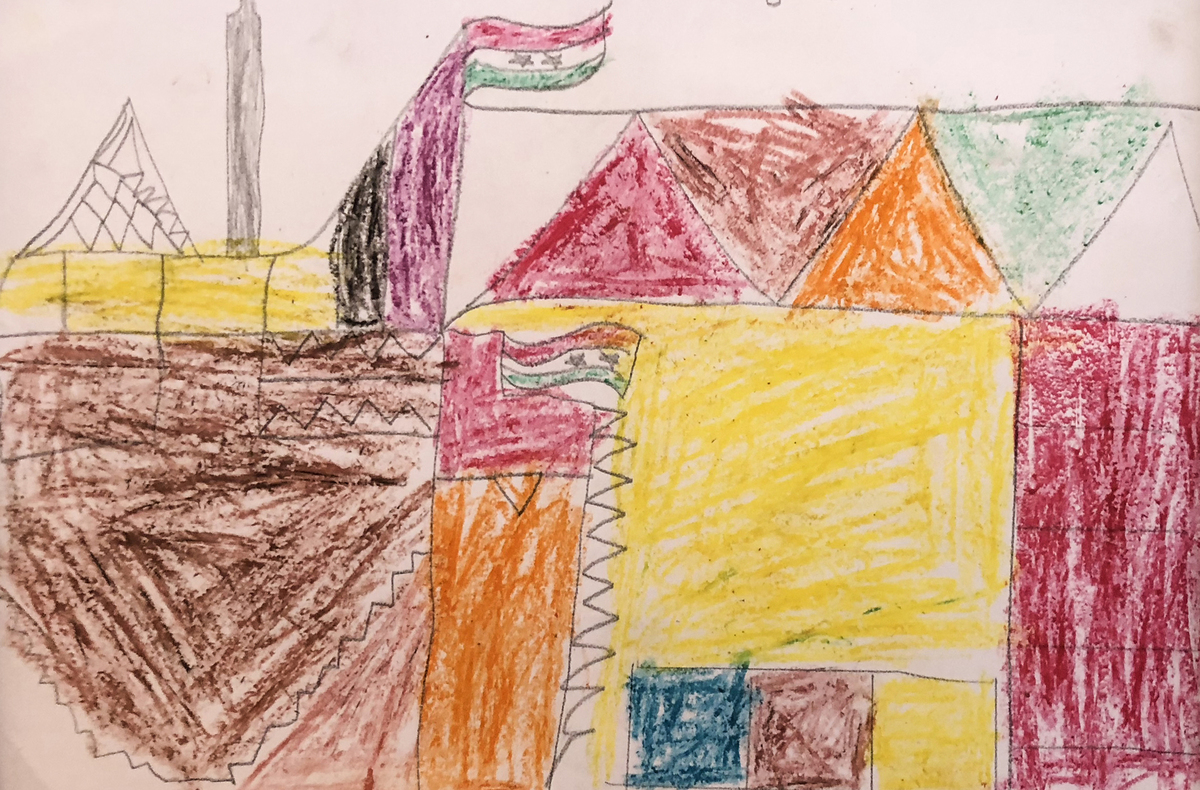 A drawing by the same child whose home in Raqqa was destroyed by ISIS depicts the family's rebuilt house.

He draws the house in bold and bright colors — all yellow, orange, blue and red.