Accessibility links
'Heavy' Brilliantly Renders The Struggle To Become Fully Realized The book is at once a paean to the Deep South, a condemnation of our fat-averse culture, and a beautiful memoir of being black, bookish, and part of a family that's as challenging as it is grounding. 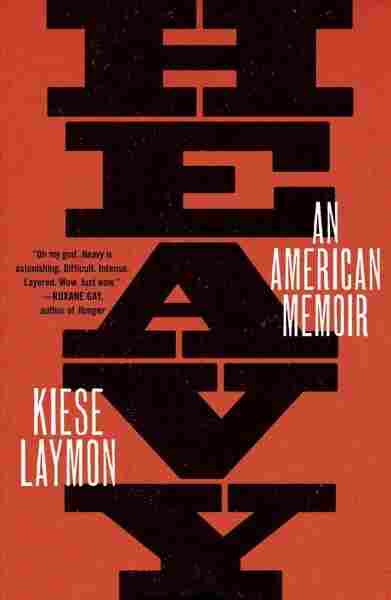 I have dog-eared too many pages to close my copy of Kiese Laymon's Heavy: An American Memoir. I found something noteworthy on almost every page.

Heavy recounts growing up in a ferociously intellectual household — the only child of a single mother — as a black boy who struggles with weight. It is about the jagged, uneven road to becoming a writer and a man; it is a chronicle of daily confrontations with the twin assaults of American racism and America's weight-obsessed culture. Heavy is a compelling record of American violence and family violence, and the wide, rutted embrace of family love.

In clear, animated prose, Laymon writes in the second person, addressing himself to his mother. This fierce woman is a prominent political scientist who completed her Ph.D. and postgraduate work as Laymon was coming up in Jackson, Mississippi, and in Maryland. To raise him to excellence, she beats him regularly. She has a violent relationship with a man whom Kiese loathes and goes out of his way to avoid. She keeps a running critique of her son's weight.

Laymon's grandmother (his mother's mother) is his anchor. Grandmama is a font of wisdom and unconditional love. "I remembered forgiving you when Grandmama told me you beat me so much because something in Jackson was beating you," he writes.

Fraught and conflicted, the mother-son relationship is as close as it gets — including physically — and mother is as demanding as it gets. Laymon writes:

"You and I have ... have never been a family of tuck-ins and bedtime stories any more than we've been a family of consistent bill money, pantries, full refrigerators, washers and dryers. We have always been a bent black southern family of laughter, outrageous lies, and books.... your insistence I read, reread, write, and revise in those books, made it so I would never be intimidated ... by words, punctuation, sentences, paragraphs, chapters, and white space. You gave me a black southern laboratory to work with words."

Laymon writes daily essays that his mother appraises and insists he revise: "'The most important part of writing, and really life, you said, 'is revision.'"

Laymon intersperses stories of friends and girlfriends and teachers and books with a narrative about food — both its attraction and revulsion. His body is a character in this memoir, the body of a black man, objectified by the culture, threatened and threatening because of America's long, ugly history of racial oppression.

Laymon begins his college education at Millsaps, a predominantly white private college in Jackson, where he deals with toxic racism and is expelled for taking The Red Badge of Courage out of the library without signing it out. The college president lets Laymon's mother know that Kiese "was lucky not to be thrown in jail." Nevertheless, it is at Millsaps that Laymon discovers Toni Cade Bambara. He has found his literary forebears:

"Bambara took what Welty did best and created worlds where no one was sheltered, cloistered, or white, but everyone ... was weird, wonderful, slightly wack, and all the way black.... writing required something more than just practice, something more than reading, too. It required loads of unsentimental explorations of black love. It required an acceptance of our strange. And mostly, it required a commitment to new structures, not reformation."

Laymon's literary output reflects this view. His debut novel, Long Division, is a strange and wonderful mélange of science fiction and heartbreaking post-Katrina reportage. Laymon's essays, collected in multiple places — most recently in How to Kill Yourselves and Others Slowly in America — form a powerful indictment of America's negation of human rights.

Suffering years of what seemingly is anorexia, Laymon ultimately transfers to Oberlin, earns a Ph.D., and becomes a college professor — first at Vassar and then at the University of Mississippi, where he lovingly embraces his roots. His mother is a through line; he presents their mutual gambling addiction as a folie à deux, and gives a brutally honest portrayal of his efforts to separate from her.

Nothing is free from struggle as he pursues a demanding goal — to become his fully realized self, both as a writer and as a man — freeing himself from the culture of violence that is the soul-strangling outgrowth of racism and misogyny. "I knew Clarence Thomas was lying," he writes, "because there was no reason in the world for Anita Hill to lie, and because I'd never met one older man who treated women the way he wanted to be treated."

This is a memoir to read and reread, as Laymon recommends readers do with all books of significance. Laymon's insights into his writing life call for a freeing of memory — black memory — which we white people have assailed and suppressed for centuries too long:

"Nothing I'd read in school prepared me to think through the permanence of violence in Mississippi, Maryland, and the whole nation.... I realized telling the truth was way different from finding the truth, and finding the truth had everything to do with revisiting and rearranging words. Revisiting and rearranging words ... required will, and maybe courage. Revised word patterns were revised thought patterns. Revised thought patterns shaped memory.... I just had to rearrange, add, subtract, sit, and sift until I found a way to free the memory."

Dear white people, please read this memoir. Dear America, please read this book. Kiese Laymon is a star in the American literary firmament, with a voice that is courageous, honest, loving, and singularly beautiful. Heavy is at once a paean to the Deep South, a condemnation of our fat-averse culture, and a brilliantly rendered memoir of growing up black, and bookish, and entangled in a family that is as challenging as it is grounding.