Accessibility links
Brexit Talks Stall At 'Moment Of Truth' Summit "We need much time, much more time and we continue to work in the next weeks," EU Brexit negotiator Michel Barnier said. This was supposed to be the day leaders would unveil a draft trade deal. 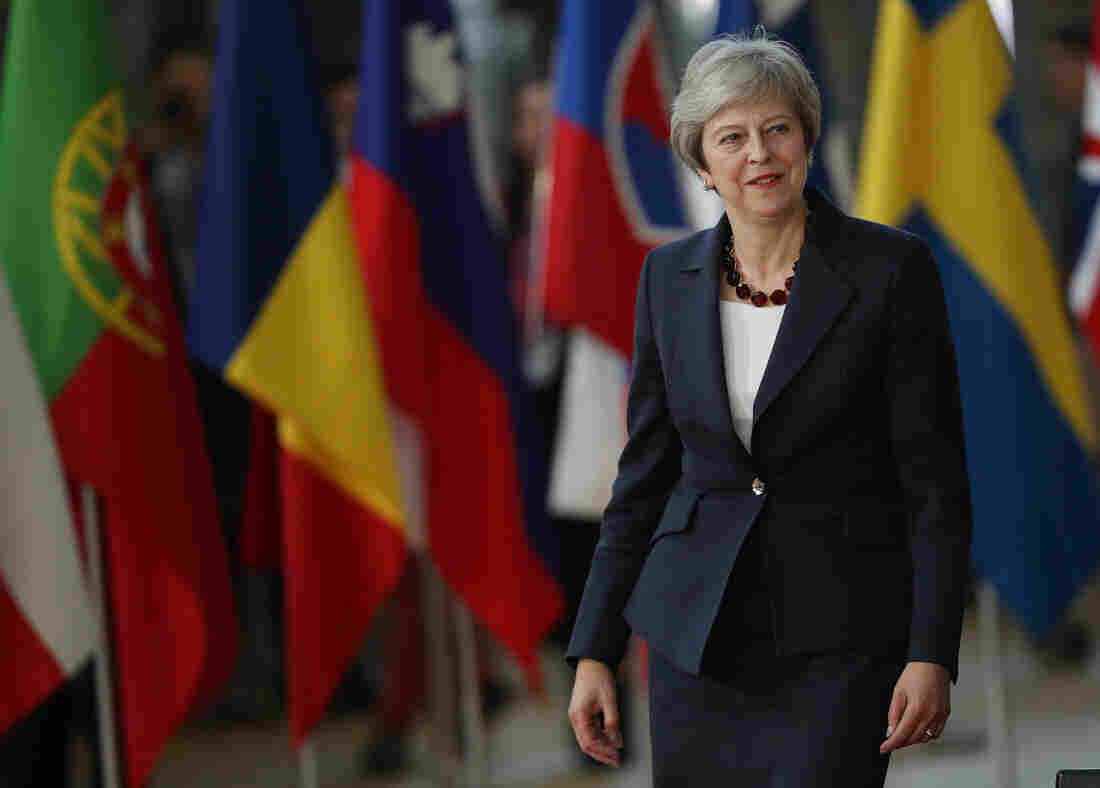 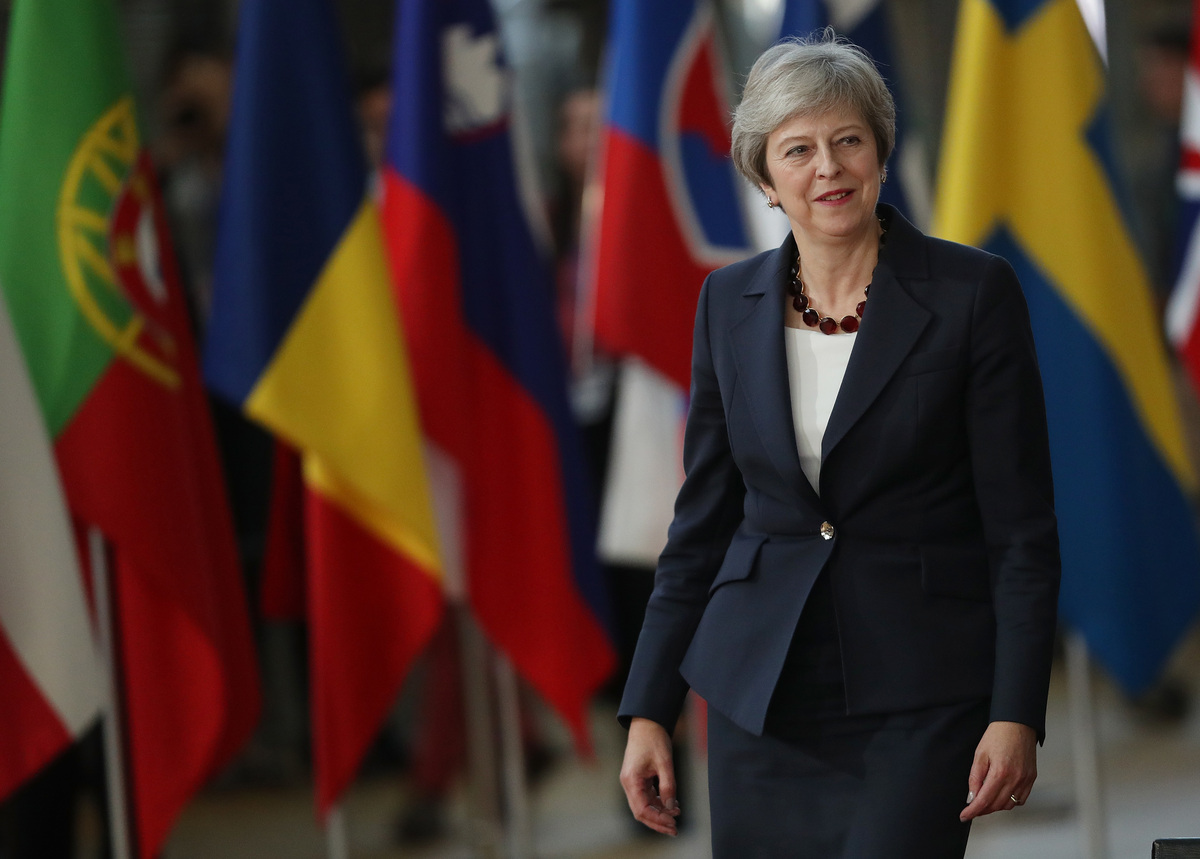 British Prime Minister Theresa May arrives to meet with EU leaders on Wednesday in Brussels.

As U.K. Prime Minister Theresa May meets with EU leaders in Brussels, a deal for her country's imminent departure from the trade bloc appears far out of reach.

"We need much time, much more time and we continue to work in the next weeks," EU Brexit negotiator Michel Barnier said Wednesday, according to The Associated Press.

May remained optimistic Wednesday, repeatedly saying that she thinks an agreement is possible. "I believe we can achieve a deal ... a deal is in the interest not just of the U.K. but also the European Union," she stated.

May met with EU leaders Wednesday — who later had dinner without her to continue their discussions.

The goal of the summit had been to "unveil a draft declaration today on the EU's future trade deal with the U.K.," as NPR's Soraya Sarhaddi Nelson reported from Brussels, but that plan was scrapped following repeated setbacks in negotiations. The U.K. voted to leave the EU in a June 2016 referendum. And as the AP wrote, this meeting today has previously been viewed as a "moment of truth" for Brexit.

As Brexit Deadline Approaches, Theresa May Vows To Make A 'Deal That Delivers'

Ahead of Wednesday's meeting, European Council President Donald Tusk said a no-deal scenario is "more likely than ever" before the U.K. is scheduled to leave the EU in March 2019. He said that while "every effort" is being made to reach a deal, "leaders will discuss how to step up our preparations for a no-deal scenario."

At the moment, however, Tusk said he had "no grounds for optimism." He added, "for a breakthrough to take place, besides goodwill, we need new facts."

Many EU leaders "see the delays as a negotiating tactic by London to try to force concessions," Nelson reported.

The summit also was intended to lay the groundwork for an additional planning meeting next month for the U.K.'s exit — though, as the BBC writes, it's possible that EU leaders will formally say they are going to use the November gathering to prepare for that no-deal scenario.

In a nutshell, the biggest sticking point in the Brexit talks at this point is where to put the border that formally separates the U.K. from the EU, and what kind of border it will be.

In The U.K.-EU Faceoff, Neither Side Is Blinking

The issue is complicated because Northern Ireland is, of course, located on the same island as Ireland, an EU member, and on a different island than the rest of the U.K.

There's significant reluctance from Brussels to drawing a hard border between Ireland and Northern Ireland. As the Financial Times has reported, they've proposed that Northern Ireland stay in the regulatory regime of the EU for goods, allowing a free flow north and south.

That proposal differentiating Northern Ireland from the rest of the U.K. has been met with resistance from Northern Ireland's Democratic Unionist Party. And that is tricky politically for May because her government relies on the party's support.

Alternatively, May has suggested that the entire U.K. remain in the customs union of the EU for a temporary period in the hope that the "Irish problem" can be resolved later. This proposal has drawn the ire of more hard-line Brexiteers from May's own party, who are concerned about a lack of expiration date and who fear that such an arrangement might weaken the U.K.'s bargaining position in trade negotiations.

Other arrangements, that seek a middle ground between fully differentiating Northern Ireland and the U.K. fully staying in the EU Customs Union, are also being floated.

The issue of Northern Ireland in these talks is a conundrum that Tusk compared to a "new version of the Gordian knot."

And negotiating some kind of alternative arrangement with Northern Ireland could cause cracks to form in the U.K.'s constitutional unity with Scotland, writes the Financial Times.

Scotland overwhelmingly voted to remain in the EU. In a recent speech, the newspaper reports that Scotland's first minister Nicola Sturgeon called for Scotland to be allowed to stay a member of the EU's single market, should Northern Ireland obtain a special deal.

"The closer the date of British withdrawal from the EU, the more it becomes clear that Brexit will pose a serious long-term threat to the UK's territorial and constitutional unity," the FT stated.

If and when a deal is reached, each member state's legislature must also approve the terms.