Accessibility links
It Wasn't Cool To Care In The 'Mid90s' — But Jonah Hill Does In Hill's directorial debut, a 13-year-old boy from a troubled home finds his tribe through skateboarding. "It really was an ethic and aesthetic for me that I carry with me to this day," Hill says. 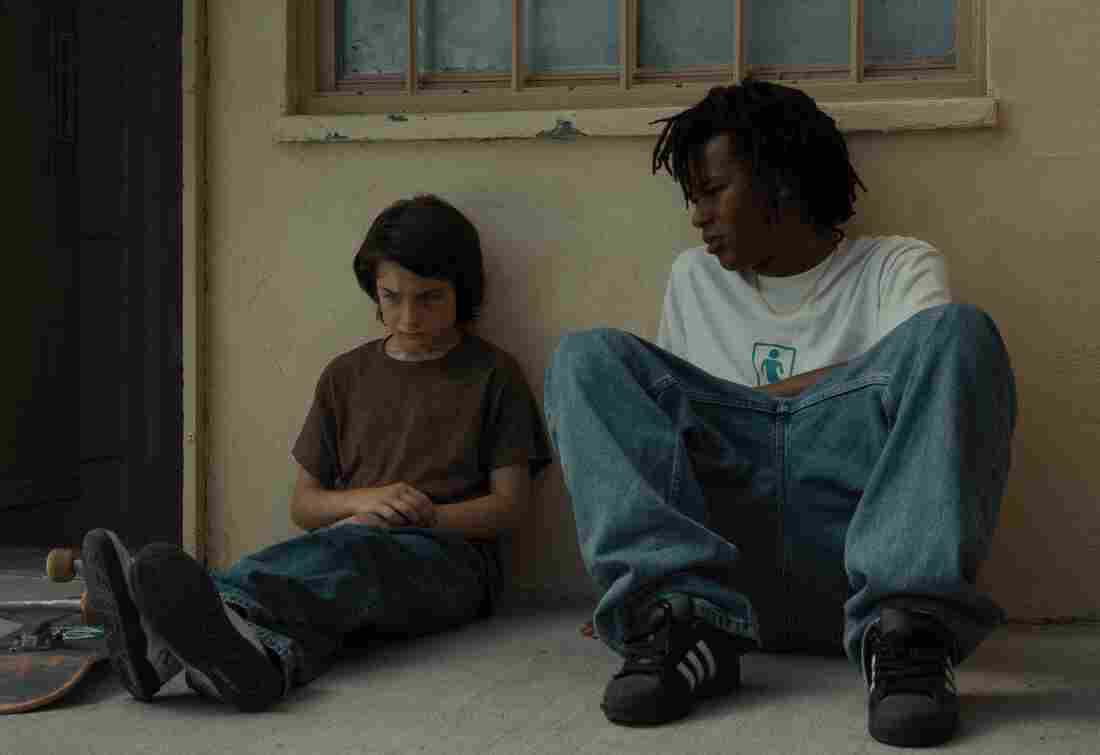 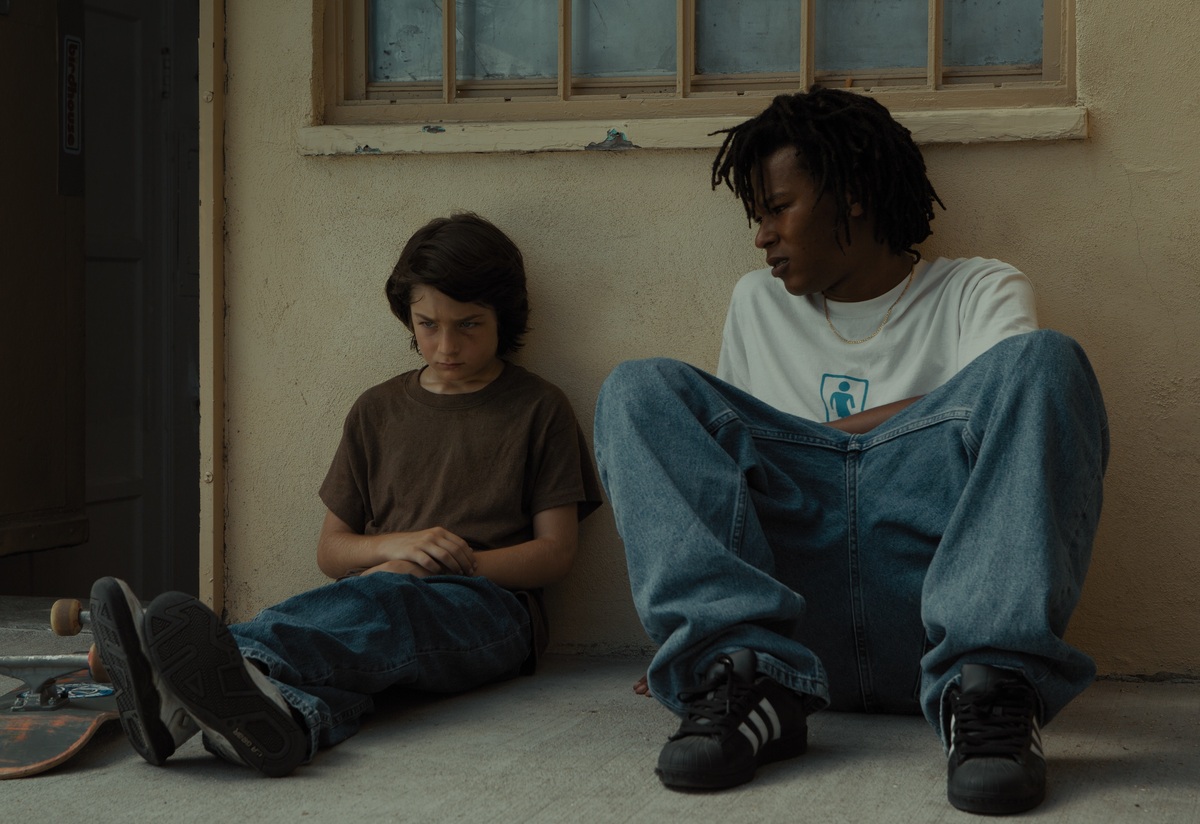 What was cool was to not care — about anything really. If you did, you were mocked endlessly. Caring didn't just mean you weren't cool — it meant you weren't masculine.

But when it comes to his newest project Mid90s — the first film that he has directed — Hill cares deeply. He wanted to tell a story that mattered to him personally.

Mid90s isn't a story about his life per se. It's about the universal longing of a teenage kid who just wants to fit in.

It's about a group of friends in Los Angeles in, yes, the middle of the '90s. Skateboarding is at the center of their universe. And Hill is determined to treat the subject with respect. 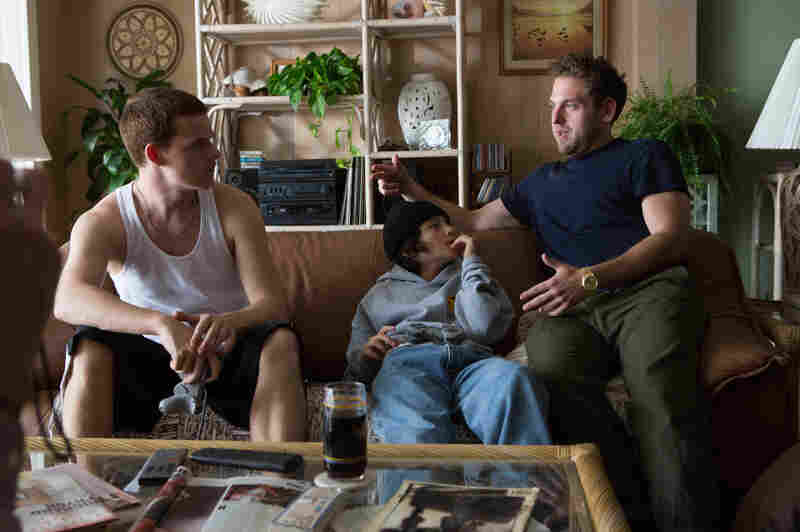 Jonah Hill (right) talks through a scene with Lucas Hedges (left) and Sunny Suljic. Many of the teenagers he cast were first-time actors. Tobin Yelland/A24 hide caption 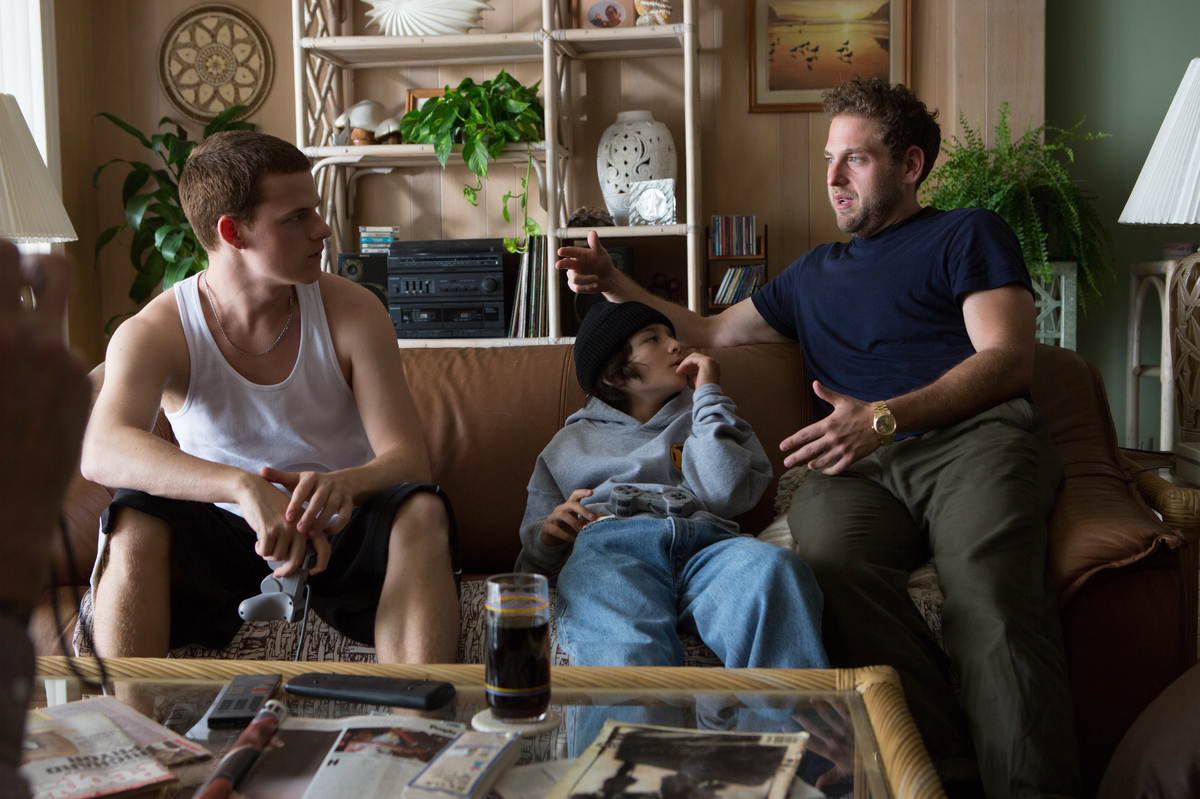 Jonah Hill (right) talks through a scene with Lucas Hedges (left) and Sunny Suljic. Many of the teenagers he cast were first-time actors.

"Skateboarding is always shown as, like, 'Cowabunga, dude!'" he says in an interview. "And it's offensive. And so skateboarding is really sensitive. Even when they heard, 'Oh, the kid from Superbad's going to make a skateboarding movie?' You know, like, 'Thumbs down.'

"Skateboarding is the most protective, insular community, which is why it's so difficult to make a film involving it. It's butchered, you know, it's misunderstood. Imagine if there was like 10 movies about NPR hosts ... but none of them had ever set foot in a recording booth and interviewed anybody, you know what I mean? So it's like any really proud subculture."

At the center of the story is a 13-year-old named Stevie. Things are bad for him at home; his brother beats him up. He's lonely and looking for some kind of connection.

Stevie sees this group of kids hanging out in front of this skate shop and he feels instantly close to their tribe.

"It's the kind of closeness you can see from 10,000 miles away," Hill says. "It's sort of a[n] idiosyncratic, perverse closeness, layered with a lot of toxic masculinity and on-the-surface cruelty, but such a deep connection and family situation."

Finding, Then Filming, The Young All-Female Crew In 'Skate Kitchen'

You know, skateboarding now is such a — it's going to be an Olympic sport for God's sakes; it's so mainstream. But when I started skateboarding, it was not cool, and society really looked down on you as a nuisance. One of the things I loved about it was the non-judgmentalness, in certain ways, of skateboarders.

And I think that created a lens that I saw life through, whether it was sense of humor, musical taste, cinema taste. It really was an ethic and aesthetic for me that I carry with me to this day.

On the way the teenage boys talk in the movie, which is often offensive

Hill: It's been such a magical experience showing this film, because it is my heart; it is my heart and my soul. And the .01 percent where someone views the toxic masculinity or the homophobia as me thinking that's funny has been heartbreaking, because it was done so intentionally to hold a mirror up to how people in this generation grew up, and the changes we're having to make, and the wrong lessons we've learned. To me, they speak so aggressively about women and gay people, that it's — that is how it was, and I thought it would be way more disrespectful to change history than to show it just as it was, and let the audience see how ugly it feels.

Martin: Our pop culture critic here at NPR, Linda Holmes, said this about the film:

It felt like a salute to how toxic masculinity makes boys feel included. Which is true! But not sweet, as Hill seems to find it.

How do you respond to that?

Hill: I just disagree. I found that it was connective tissue, which is unfortunate. I still think these people were there for each other, even though they had a lot of behavior I don't think is cool.

The point of the movie is that nothing's black or white. I'm not a moralist; I'm not here to tell an audience how they should feel. I think the way they speak about women and gay people is really a messed-up way to go about that. And then at the end of the film, they still are there for one another.

So I don't think anyone is purely good or purely bad. I hope to create complex characters that constantly are challenging what you think of them.

On the casting of the movie, which employed a lot of first-time actors

Hill: The singular most moving experience in my life was casting first-time or non-actors. And they became these people, and became actors and artists.

One of the kids, Olan [Prenatt] — the kid with the long, curly hair who's very light and fun and funny — at lunch ... all the kids would joke around, talk trash and stuff. And I saw he looked really pensive and that was abnormal. And you feel kind of big-brotherly or protective over them, so I was concerned. And then I looked down, and he had his rumpled-up script under the table, and he was rehearsing his lines during lunch. And this is a kid who had never thought about acting before.

Martin: Which is so funny, right, because the guys, the characters they're playing are struggling to be perceived like they don't care about anything. It's not cool to care.

Hill: In the '90s, it was the lamest thing ever to say that you cared, or tried — at least in the culture I grew up in. And what I love about spending time with these kids now is that they are motivated. And these kids give such naturalistic performances — I am just so proud of them. It's very moving.

You know, my whole dream my whole life was to be a writer, director. I fell into this 15-year acting career where I got to learn from a lot of my heroes, and it's something I have wanted to do and would've done sooner. It's just that you only get one chance to make your first film. And I really wanted to wait until it was something that really meant something to me. I love this film; I stand by it. And I hope to just keep making things that I care about. That would be a great life. I should be so lucky.

Danny Hajek, Taylor Haney and Jerome Socolovsky produced and edited this interview for broadcast. Patrick Jarenwattananon adapted it for the Web.