Accessibility links
Don't Be Fooled By The Talking Horse — 'BoJack' Is A Sadness 'Sneak Attack' BoJack is a former sitcom star struggling with depression and addiction. Creator Raphael Bob-Waksberg says part of the pitch for the animated show was, "What's Mister Ed like behind the scenes?" 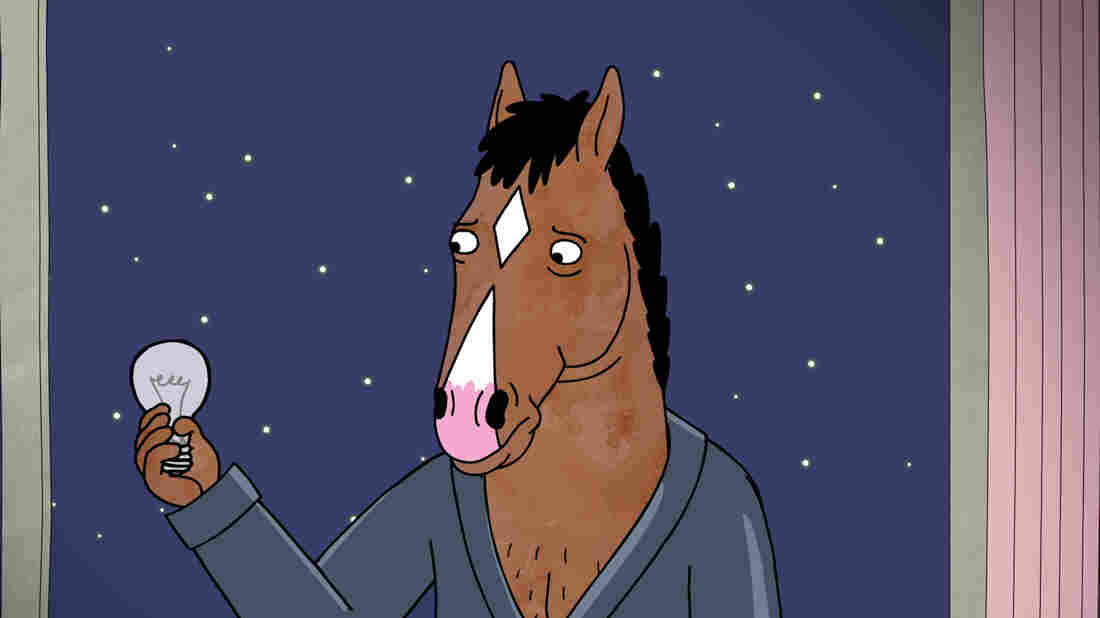 The animal people in BoJack Horseman are the creation of illustrator and cartoonist Lisa Hanawalt. The bitterness, isolation, melancholy and cynicism are "my half of the equation," says show creator Raphael Bob-Waksberg. Netflix hide caption 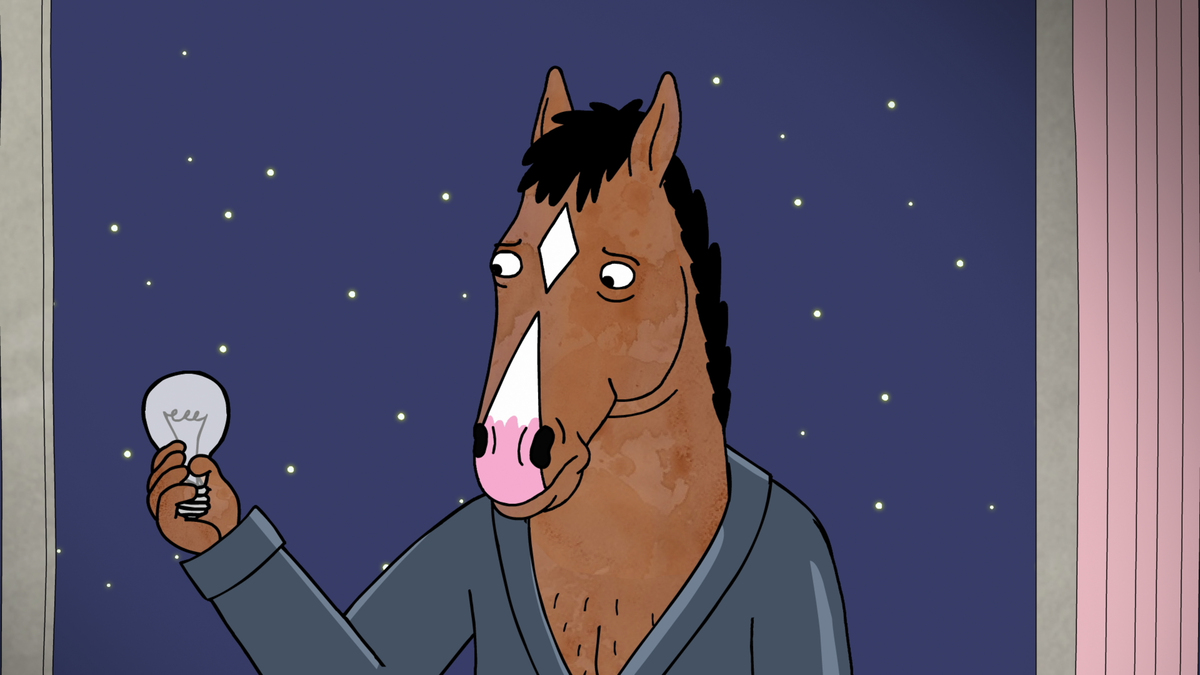 The animal people in BoJack Horseman are the creation of illustrator and cartoonist Lisa Hanawalt. The bitterness, isolation, melancholy and cynicism are "my half of the equation," says show creator Raphael Bob-Waksberg.

The central character in the Netflix animated comedy series BoJack Horseman is a former sitcom star struggling with depression and alcohol addiction — who also happens to be a horse. Creator Raphael Bob-Waksberg likens his series to that other show about a talking horse, Mister Ed.

Part of the original pitch for the show, he says, was, "What's Mister Ed like behind the scenes? When Mister Ed goes home after shooting, who is he really?"

The answer to that question turns out to be pretty dark. The series, which is written for an adult audience, is now being syndicated on Comedy Central. It satirizes Hollywood using a mix of human and animal characters to address issues of failure, ego, power, addiction and relationships. The current season is set in the midst of the #MeToo movement.

Bob-Waksberg says the show's format gives it a wide latitude: "Because it's animated and it's, like, a horse and it's bright and colorful, it just takes on a different feel," he says. "And you can kind of sneak attack into sadness and in some fun, surprising ways."

On how he got the idea for BoJack Horseman

The idea for the show really started from my friendship with Lisa Hanawalt, who is a brilliant illustrator and cartoonist. ... One thing she was doing was just drawing these animal people on her own and posting them in her blog and on the Internet, and I thought they were just so gorgeous, these designs of these characters which were human from the neck down more or less with these animal heads. So I started thinking about: Is there a show that I could write with these animal people?

So that's kind of where the animal people part comes into it. Where the bitterness and isolation and melancholy and cynicism comes into it — I guess that would be my half of the equation. I was living in Los Angeles and I [had] just moved here from New York myself, and the first place I ever lived here in LA was, like, a friend of a friend's house I'd somehow found a connection to, and it was like this tiny little closet of a bedroom in this gigantic gorgeous house in the Hollywood Hills. ...

I wanted to make a show about a character who had had every opportunity for success and still couldn't find a way to be happy ...

I was this nobody and I didn't know anybody in town and there was this winding, treacherous road up to get there ... and I felt so disconnected from everything. That idea of feeling simultaneously on top of the world and also never more alone and isolated was the beginning of this character for me. I wanted to make a show about a character who had had every opportunity for success and still couldn't find a way to be happy, and then mixing that with Lisa's animal drawings was the pitch.

On Horsin' Around, the fictional '80s sitcom that made BoJack famous

Diff'rent Strokes is certainly an inspiration. Full House, The Brady Bunch, Step by Step. I think in the '70s and '80s and '90s there were a lot of sitcoms about different family units and blended families and odd configurations of families and different ideas of what makes a family, so it felt very appropriate that in our world where we have animals and people coexisting that there would be a show about a horse bachelor raising three human kids and learning how to make a family together.

One thing that I really enjoy exploring on BoJack Horseman is our culture's relationship with these ... some might say cheesy sitcoms of the '80s and '90s, and also BoJack's own relationship with being a part of it — that even in BoJack's ambivalence about being on this show ... there are real people who come to him and say, "This show meant a lot to me," and it means something and I like that.

A big part of the larger story of [BoJack's] relationship with his mother and his relationship with his parents is about this idea of can you forgive people who have done nothing to earn your forgiveness? And can you find peace with this woman who is so damaging to you, but [who] is gone now and will never hurt you again? ...

I'm really interested in that idea. That question of what do we owe the people in our lives as far as forgiveness goes? I think what's really interesting for me is the tension between that and too easy forgiveness of public figures. I want to believe on a personal level that nobody is irredeemable or so far gone that they can't find a way to be better and be forgiven.

Not My Job: 'BoJack Horseman' Creator Gets Quizzed On Centaurs

How does that track with me, where I also think some of these famous ... men who've hurt so many people and [done] so many terrible things should just go away forever and not be allowed any sort of redemption?

I don't know how I reconcile those two ideas, and that tension for me has been at least really interesting to explore over the course of this last season, but also the show in general.

On how he handles viewer feedback about offensive jokes

Sometimes there are challenges in your job or your career and you have to, like, learn how to take them, and I think it's a good thing and I think this means that more people are being heard. ... I think it is a challenge to challenge your own preconceived notions of what is OK, or what is funny, or who are you making your comedy for? I think if you are a comedian who doesn't care about that, then fine, make the comedy for the people that will not be offended and that will be your audience.

I want to make comedy that people who are perhaps disenfranchised or marginalized can enjoy. I don't want my comedy to exclude them. So it's a challenge that I take on.

It's sometimes hard to get that feedback when people say, "Hey, this really hurt me," because my ego wants to say, "No it didn't." I want to feel like, "No! I am smart. I am good. I'm a good guy. You don't understand! I have good intentions," but I think hearing that really helps me.

I don't want to get to a place where I'm not hearing those notes, or I feel like I don't have to hear those notes — because I think it makes me a better, more sensitive and more interesting writer.