Accessibility links
In Danger Of Losing, Iowa Governor Enlists Republican Heavy Hitters Ahead Of Midterms So far, there are more than 10 very competitive races for governor across the country. One of them is in Iowa, where the incumbent Republican can't seem to pull ahead of her Democratic challenger. 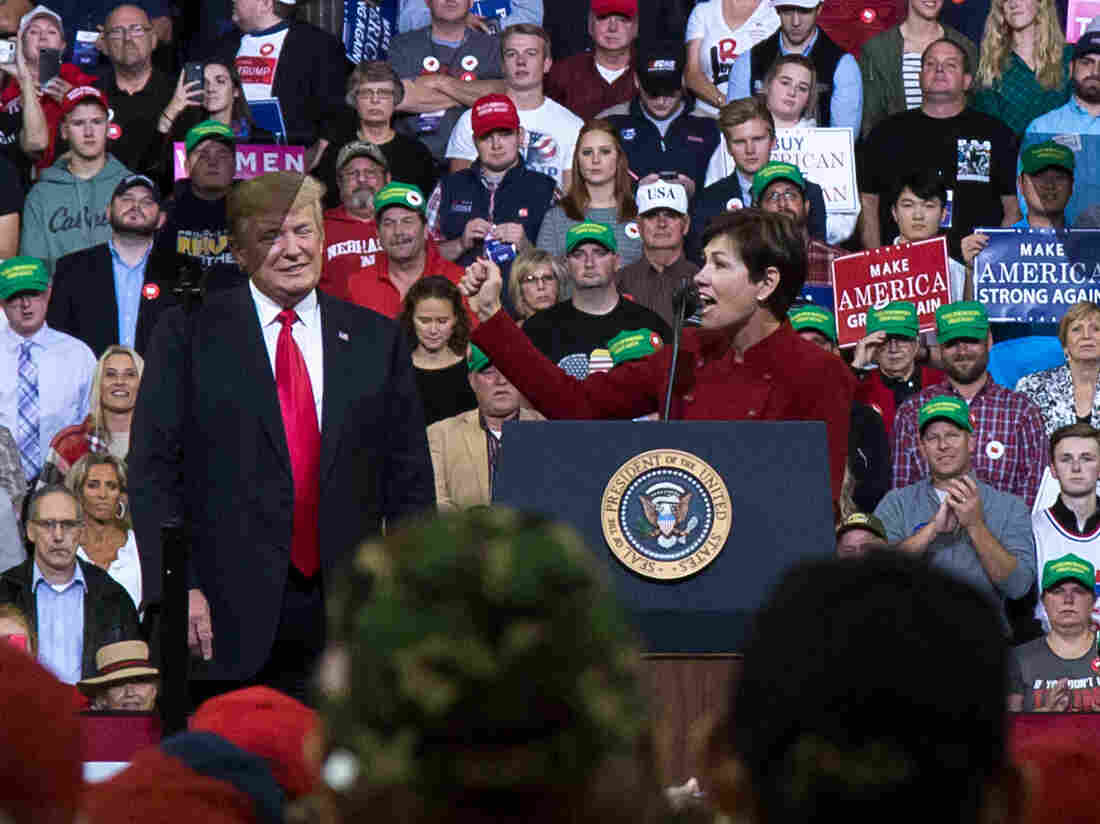 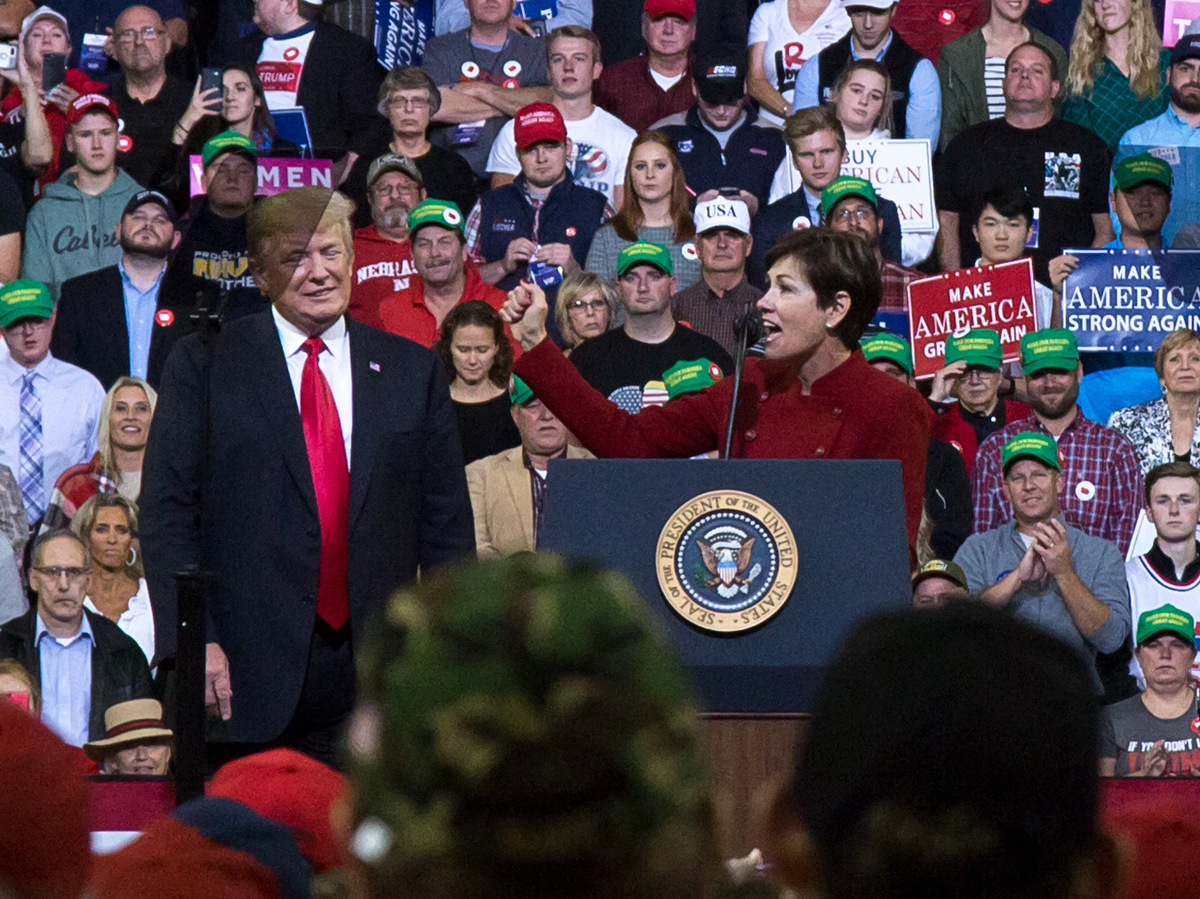 Iowa Gov. Kim Reynolds speaks to a crowd at a campaign rally with President Trump in Council Bluffs, Iowa, on Oct. 9.

Next month, 36 states will elect a governor. Nine of those races, where Republicans are in office, are so competitive that some analysts say they are a toss-up. Even though a Republican is in office now, the winner could come from either party.

Like in Iowa, where Republican Gov. Kim Reynolds can't seem to inch past her Democratic challenger, businessman Fred Hubbell, who has been polling several points ahead of her for months.

In the past week, several big-name Republicans have come to the state to campaign with Reynolds. This weekend it was barbecue and live music at a harvest-themed fundraiser for her in Des Moines, with balloon animals and face-painting for the kids.

For the adults, White House press secretary Sarah Sanders was the keynote. The daughter of former Arkansas Gov. Mike Huckabee told the crowd it needed to keep the state's top office in Republican control.

"Trust me, I've seen what a liberal Democrat running a state looks like. Remember, I'm from Arkansas and I lived under the Clintons for a long time." 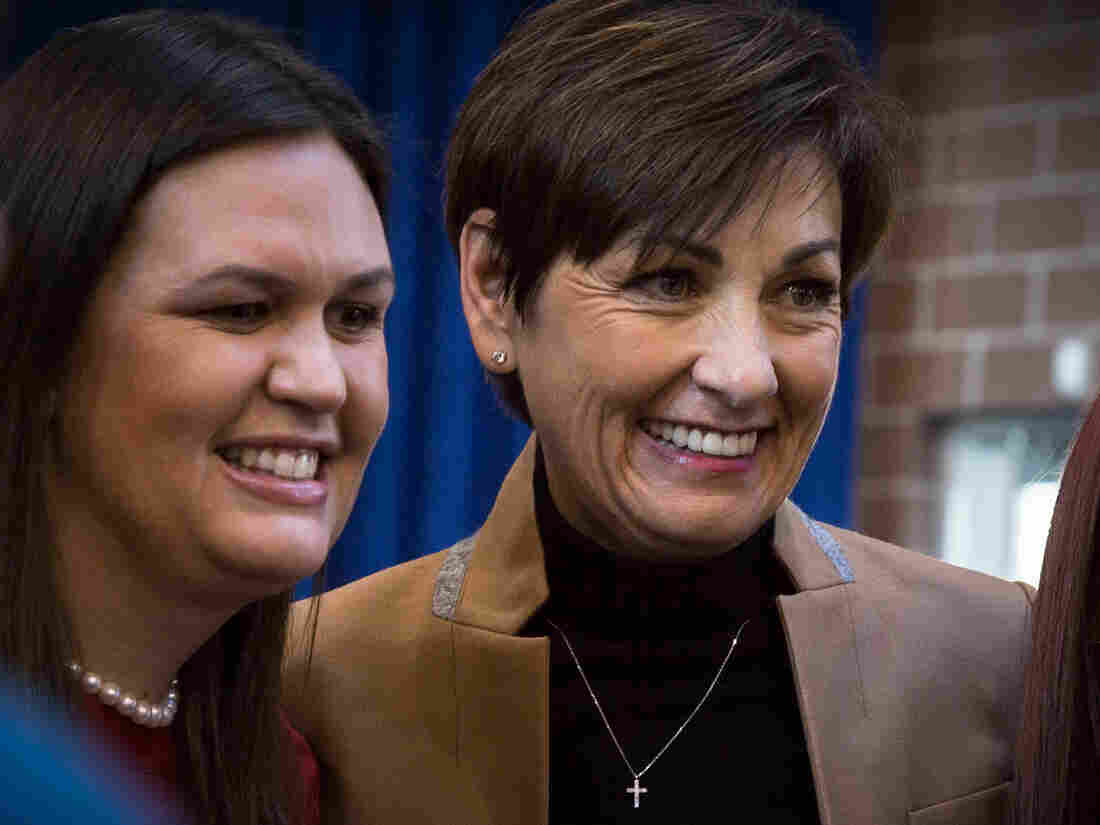 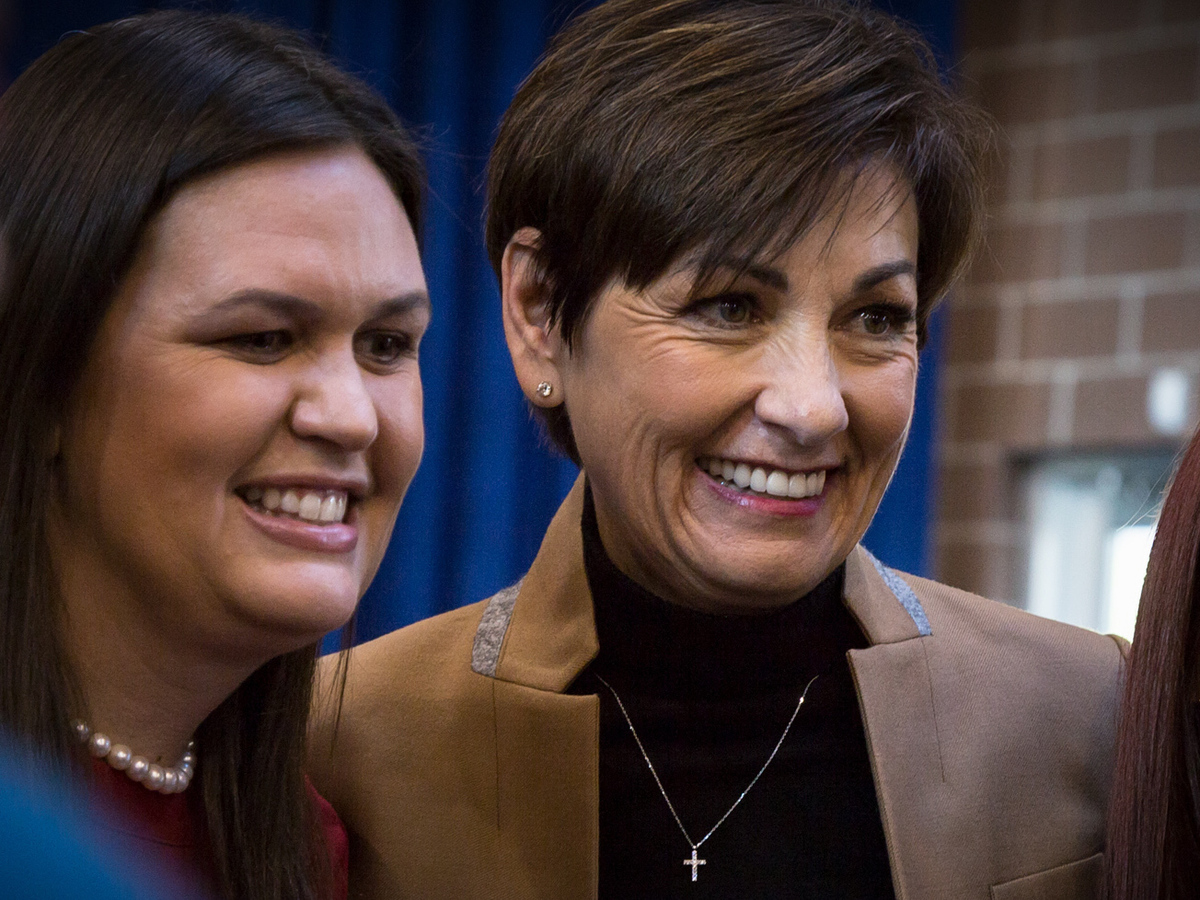 An incumbent, yes, but this is the first time Reynolds has run for her office. She was lieutenant governor and took over for former Gov. Terry Branstad when he became U.S. ambassador to China last year.

Reynolds touts a budget surplus of $127 million and a state unemployment rate of 2.5 percent as reasons voters should keep her as governor. Carol Gerst gets that. Gerst says that although she is a registered Democrat she plans to vote for Reynolds. She approved of Branstad while he was in office and says, "We're staying with Kim because we think he was preparing her for this moment."

As Reynolds stepped out of the shadows of her predecessor she has walked into the light of President Trump. Last week, she appeared onstage with him in front of a packed arena in Council Bluffs, praising him.

"Thank you for cutting taxes for hard-working Iowans, for eliminating senseless regulations that stifled innovation and jobs," she said. "For standing strong with Justice Kavanaugh and appointing conservative judges to the court!"

Democrats see Trump as a campaign point, too: They are hoping Reynolds' close alignment with the president works in their favor. The immediate effects of Trump's tariffs have not been good for farmers. And while Iowa went big for him in 2016, two years later, he has a less-than-stellar approval rating in the state. 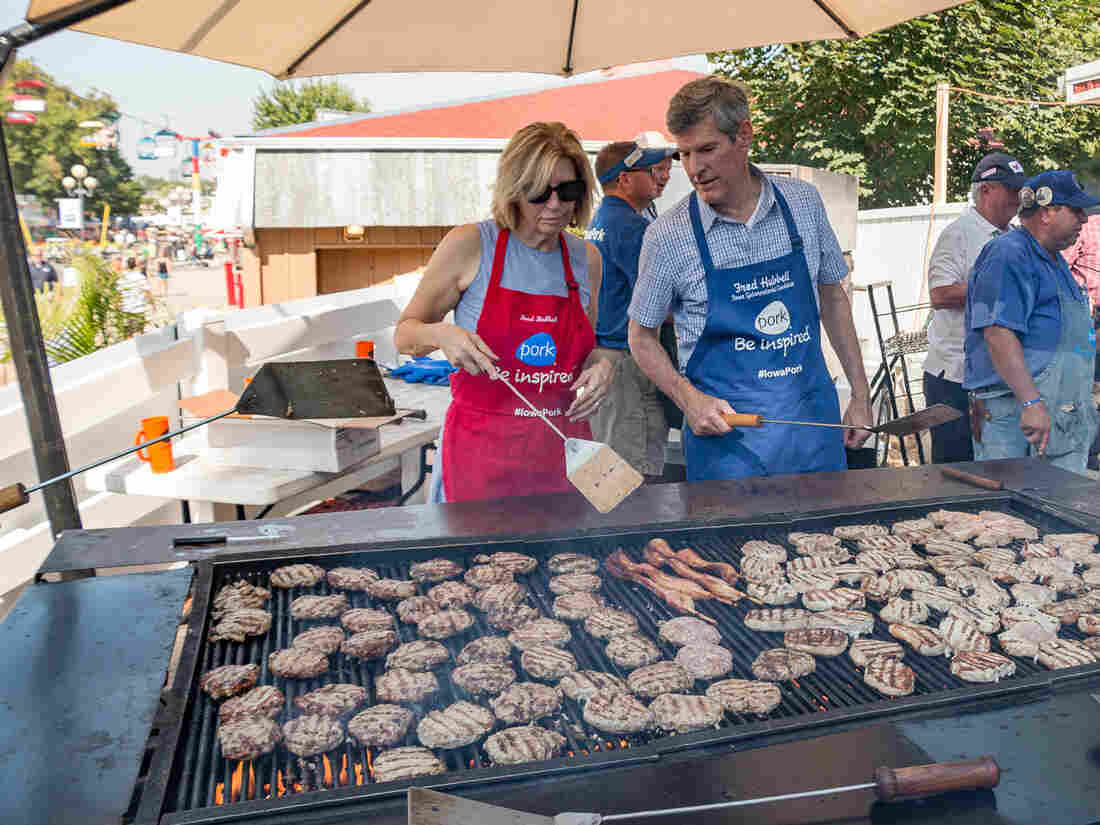 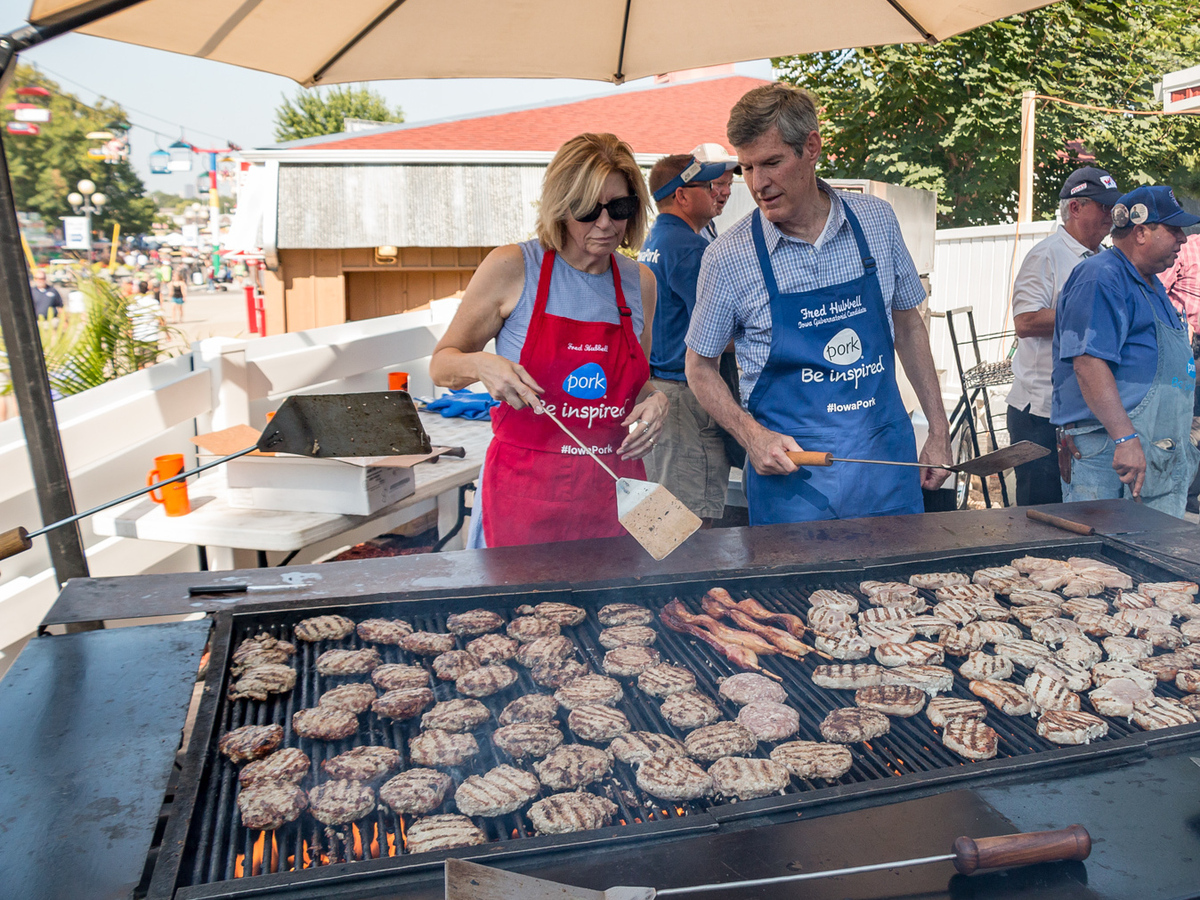 Fred Hubbell, the Democratic nominee, is a former board member of Iowa's Planned Parenthood and has some name recognition in the state. He is wealthy, using a lot of his own money on his campaign, and is getting help from some of his out-of-state friends, like Washington Gov. Jay Inslee, the chair of the Democratic Governors Association.

"Fred Hubbell is going to be the next governor," Inslee said, talking with volunteers getting ready to knock on doors in Grinnell, a small college town.

"Donald Trump is just a blip in history and we are going to rescue this country starting right here in Iowa."

Hubbell's campaign has primarily focused on what he says is Reynolds' mismanagement of Medicaid and the state budget.

"We shouldn't be taking money out of education, out of health care, out of public safety, out of our judicial system and then [coming] up with a budget surplus that was a lot bigger than they thought it was and they can't explain why."

On the other hand, Reynolds frames Hubbell as out of touch with everyday Iowans and criticizes him for not releasing more of his tax returns.

Artist and Democratic volunteer Tara Shukla-Jones says she is voting for Hubbell even though he wasn't her first pick in the primary. "I think voting is kind of like brushing teeth. It's not really glamorous and it's not really about you. It doesn't always make you feel fabulous but if you don't do it for a long time there are problems, right? So I think Fred Hubbell is certainly a better choice for governor."

With early voting underway, some Iowans have already cast their decision in a race that has quickly become one of the country's most competitive gubernatorial elections.