Accessibility links
Destra Is The 21st Century's Liberator Of Revelry She can command a crowd like few others — and during her career, she's broadened the definition of soca, established herself as a brand and fueled Trinidad and Tobago's growing feminist movement.

Destra Is The 21st Century's Liberator Of Revelry

Destra Is The 21st Century's Liberator Of Revelry 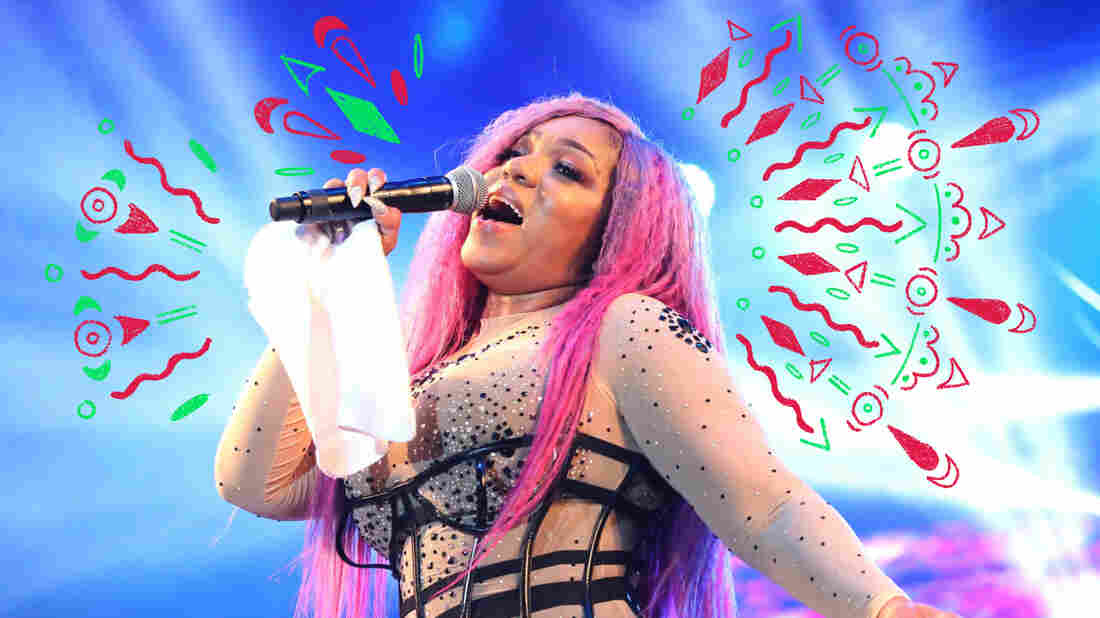 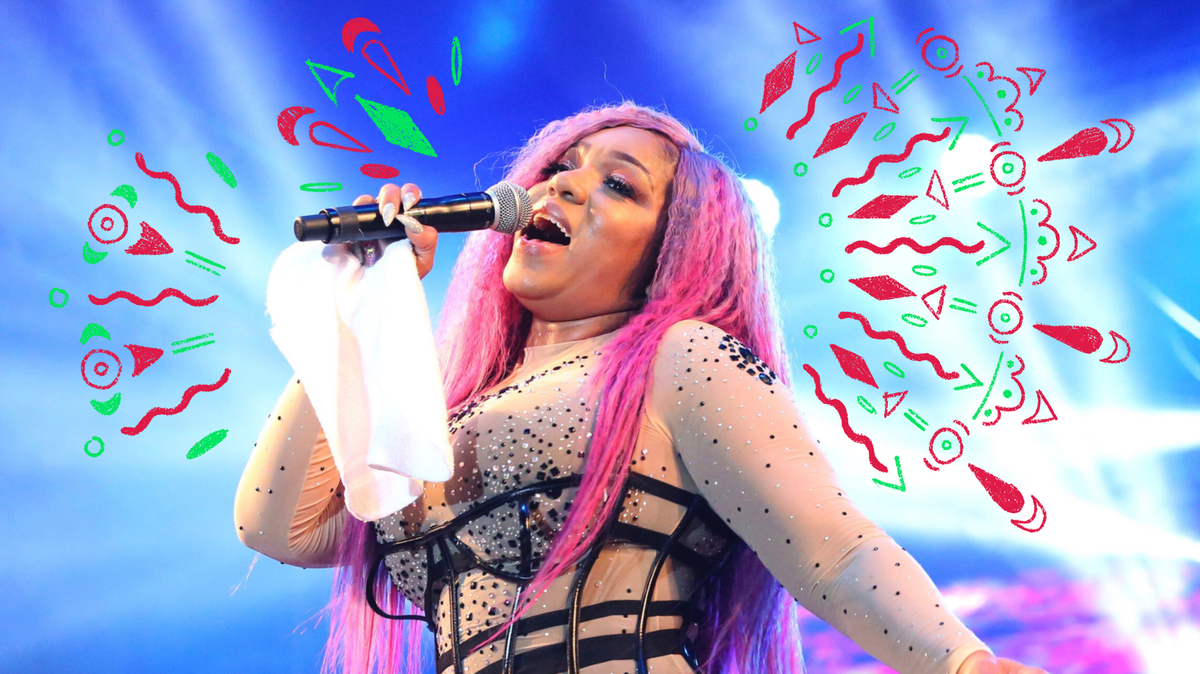 Destra performs during Carnival in 2018 in Port of Spain, Trinidad.

At any given moment on the Caribbean sister islands of Trinidad and Tobago, people are either preparing for, celebrating or reminiscing about Carnival. The pre-Lenten occasion blankets the country in a spirit of unity and abandon, culminating with a colorful burst of costumes during parades in the capital, Port of Spain. Predating the abolition of slavery, Trinidad and Tobago's Carnival has inspired similar celebrations around the world, such as Barbados' Crop Over, which has entered the American pop culture lexicon thanks to Rihanna. However, soca, the music that fuels all of these festivals, was born in the home of Carnival, as was the woman who added pop-star production value to the genre: Destra.

Created in the '70s as the upbeat offspring of calypso that draws upon the West African and Indian influences on Trinidad and Tobago's culture, soca has been primarily orchestrated by three artists: Lord Shorty, the "Father of Soca" and the genre's creator; Machel Montano, the "King of Soca" and it's most commercially successful artist and Alison Hinds, the "Queen of Soca." But only Destra has the distinction of reigning over the revelry as the "Queen of Bacchanal." And though she can command a crowd like few others, her title doesn't even begin to encapsulate the impact she's made during her two-decade-plus career by broadening the definition of soca, establishing herself as a brand and adding fuel to the fire of Trinidad and Tobago's blossoming feminist movement.

If you're unfamiliar with soca, "Carnival" — Destra's career-catapulting collaboration with Montano, released in 2003 — is a crash course in the formula the majority of the music follows. First, there's the pulsing beat; the near-150 BPM track is impossible to listen to without dancing. Alluding to a celebration is necessary, of course, and Destra sings of the ubiquity of Carnival's celebrations in her honeyed voice, embellished by her Trinidadian patois: "Like we need blood in we vein/ That's how we feel about Port of Spain." The hook of the song serves double duty, demonstrating the genre's characteristic repetitive exclamations and instructing listeners to perform the Holy Trinity of movements to soca music — jump, wave and "wine" (gyrate one's waist):

Today, "Carnival" is a certified soca classic, along with Destra's other early hits, "Bonnie and Clyde," "Fly" and "I Dare You." Each showcases her ability to find the sweet spot between embracing the fundamental elements of soca and incorporating the unpredictable. "Bonnie and Clyde," for example, eschews fete-focused lyrics, instead telling the story of a woman's anticipation for Carnival to return so she can find a man who romanced her the previous year. In doing so, Destra implies the celebration's omnipresence in her country by positioning it as a life-altering event where one can find (or lose) love, instead of simply praising its parties.

Destra's habit of sprinkling that extra something into her songs is part of her plan for soca to "go global," as she told Fader in 2016. (The only soca artists to chart in the U.S. are Rupee and Kevin Lyttle, both of whom are one-hit wonders by American standards.) Sure enough, she's blended soca with genres from around the world: Her 2006 collaboration with the band Dil-E-Nadan, "Aur Chale," incorporates the chutney soca subgenre with its interpolation of "Au Tjele Naatje," sung in Suriname's hybrid of Hindi, Dutch and English creole; in 2015, she released a remix to Nigerian Afrobeats artist Timaya's "Sanko"; last year's "Run Road" features an EDM-inflected beat that can rival any Major Lazer record and her recent single "Family" nods to American jazz legend Nina Simone's "Feeling Good."

These international influences don't just show up in Destra's music, however. Taking a note from American pop stars, Destra isn't just a singer—she's a marketed brand. In 2006, she became the first woman to serve as Trinidad and Tobago's spokeswoman for Digicel, the T-Mobile of the Caribbean, and she's got a knack for cleverly promoting her songs, too: She announced her engagement last fall with the song "Marry This Wine," complete with a bridal photo shoot shared on her Instagram. (Her impressive Instagram following—she currently has 249,000 followers — is surpassed by only one other soca artist, Montano.) As further proof of her influence, she's being courted by Antigua's tourism board to host her wedding there.

But her greatest branding effort has been her sassy, sexually liberated alter ego, Lucy. The soft-spoken singer hinted at her more extroverted side as early as 2002, when she donned a sheer bodysuit adorned by a strategically placed vine of leaves that caused all of Trinidad and Tobago to clutch their pearls. In addition, many of her songs center on the concept of men needing permission to dance with her; "I Dare You" challenges a man to prove he's worthy of her wine, and he'd better not waste her time when doing so. This plays out in her performances, when she selects men from the crowd to audition for her on stage, humbling them with her criticism. But it wasn't until 2015 that this persona would get a name and, in true Destra fashion, an eponymous single for its debut. Yet another narrative crafted to fit within the template of soca, "Lucy" details how Destra's reputation as a "real good girl" was shattered once she began going to parties, causing her to be perceived as "loose," or slutty.

This origin story is significant, considering the conflicting ways in which women are perceived in the Caribbean. There's been a long-standing debate as to whether wining is an homage to the culture and its indigenous, African and South Asian roots, or a seductive routine, especially since men and women often dance together in a sexually suggestive manner. While there's nothing wrong with the more provocative aspect of wining, the problem lies in that it becomes misconstrued as evidence that a woman is, well, loose, or that it's consent for a man to approach a woman, even if she doesn't actually approve. As a Caribbean-American who accepts both the tributary and suggestive associations with wining, I've seen firsthand how men can react aggressively when their advances are rebuffed, as they've considered my dancing as an invitation.

Though my experiences with this are rare, there's no doubt about how the sexual implications of wining and Carnival's body-baring costumes can lead to harmful assumptions about women's boundaries, partly because of latent misogyny in the Caribbean. In 2012, the region was reported to have a disproportionately high rate of gender-based violence, and efforts to make improvements are bleak: Just two years ago, Port of Spain's then-mayor blamed a woman for her murder at Carnival, claiming that, "if she was still in her costume...let your imagination roll." (These comments did spark last year's "Leave Me Alone"/"Leave She Alone" campaign, championing consent, and the mayor's resignation.) Women are arguably the focal point of Carnival — a Google search for "Trinidad Carnival" will reveal endless results of radiant, costumed women — yet the same actions that they are praised for invite criticism and, worse, violence.

That said, Destra's presence as a liberated woman, even when disguised as Lucy, emboldens women to assert agency over their bodies, whether praying in church or wining on the road. With challenging men being a running theme in her work, she's not only proudly owning the sexual nature of her dancing style, but also flipping its implications of power in her favor. (She's hardly the only woman of soca to operate in this vein, joining of the likes of Fay-Ann Lyons, Patrice Roberts, Denise Belfon and the aforementioned Alison Hinds.) Additionally, the dichotomy of Destra and Lucy bolsters the seemingly difficult-to-grasp concept that a woman isn't confined to her decision of whether or not to embrace her sexuality. She can be as introverted as Destra or as raunchy as Lucy, if and when she chooses. (Lucy has even "emancipated" herself from Destra for a 2016 radio interview.)

Despite everything Destra has accomplished, she has yet to earn two awards that would officially recognize her impact on her culture: The International Soca Monarch — the Super Bowl of soca — and the Road March title, given to the most popular artist on the parade route. Earlier this year, she intimated to XX her concern about not having these accolades: "When I die and the future is looking back in the history books...and they don't see mine for winning a title," she asked, "will they remember who Destra is?" But Destra has admirers throughout the Caribbean, the U.S., Canada, Germany, France and Spain; plus, she has fans in Nicki Minaj and Cardi B, and even joined Montano in opening for Beyoncé's first-ever performance in Trinidad. During this year's Crop Over, I heard her new music blaring from speakers all over Barbados, just as loudly as "Carnival" did 15 years ago. That's as good of an indication as any that Destra could never be forgotten.