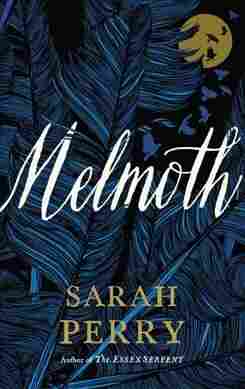 Sarah Perry's new novel, Melmoth, opens with an imperative: "Look!" The object of our gazes is Helen Franklin, 42, "small, insignificant, having about her an air ... of self-punishment, of self-hatred, carried out quietly and diligently and with a minimum of fuss."

She is hurrying through Prague at night when she is stopped by Karel, a friend who appears disheveled and erratic, like Coleridge's mad speaker in Kubla Khan, about whom watchers say, "Beware! Beware! / His flashing eyes, his floating hair!" He shows her a collection of papers concerning the existence of a creature called Melmoth the Witness. Soon, he disappears, and Helen begins seeing traces of a dark figure following her.

Melmoth centers on the idea of witnesses, as indicated by that crucial first word — Look! — which tolls through the novel like a bell. In Perry's story, Melmoth was one of the women who went to Jesus' tomb and found that it was empty, and that Christ had risen. But she denied what she had seen. "Because of it she is cursed to wander the earth without home or respite, until Christ comes again. So she is always watching, always seeking out out everything that's most distressing and most wicked, in a world which is surprisingly wicked, and full of distress. In doing so she bears witness, where there is no witness, and hopes to achieve her salvation." Feet bleeding from her wanderings, Melmoth begs those she approaches to follow her, promising to end their loneliness.

'The Essex Serpent' Spreads Its Wings

Interspersed with Helen's story are those of others who have seen Melmoth in the darkest moments of their lives: First, a boy in German-occupied Prague who betrays his neighbors to the Nazis for their beautiful radio. There is a a 17th century heretic who, about to be burned at the stake, succumbs to Melmoth's temptation in order to live, and a 20th century Turkish bureaucrat who helped enable the Armenian genocide.

Melmoth is not subtle: Birds of omen swoop in the backdrop, candles gutter, darkness falls like "a soft black dust," figures lurk behind windows, visible only as a patch where "the night's fabric [is] thicker." The coming of Melmoth is signaled by the sudden scent of lilies. It is overwrought, in a lavish, Gothic kind of way, that should sometimes have been restrained. This novel is also sloppier than her last, the wonderful Essex Serpent, and less rooted in place. Her Essex was muddy, mossy, and gloriously specific, in contrast to the pretty snowglobe that is her Prague.

But there is something satisfying in Melmoth's flamboyant emotions. The last few years have brought a glut of fashionably affectless and amoral fiction, the kind that induces a kind of weary glaze, almost like endless scrolling online. Sarah Perry's fierce, full-hearted books about love and ethics feel like an antidote to that elegant apathy.

Like most monsters, Melmoth is a mirror of our fears: that we are unredeemable; that no one who loves us really knows who we are.

This book is based in part on Melmoth the Wanderer, an 1820 Irish Gothic novel by the clergyman Charles Maturin. That Melmoth is a man searching the world for someone to take over a pact he made with the devil. Here, transmuted into a woman, Melmoth is characterized by a radiant loneliness: "Think of a black ship adrift in a windless calm..." (again Coleridge comes to mind, this time his Ancient Mariner: "Alone, alone, all, all alone, / Alone on a wide wide sea!"). She finds the loneliest people in the world and offers companionship in misery, promising that no one else can understand them.

Like most monsters, Melmoth is a mirror of our fears: that we are unredeemable; that no one who loves us really knows who we are. Melmoth says,"I know what a fraud you are, what an imposter — you never had me fooled: I know how vain you've been — how weak and capricious and cruel! What might they all say, if they knew?" She promises, "it is I alone who loves you in what is most secret and sinful in your soul.

In a way, Perry's all-seeing monster is less frightening than the other option: that nobody is watching at all. Much of our ethical behavior over the last centuries was predicated on accountability to a divine watcher. Now, if we don't believe in God, who sees or cares what we do? Melmoth asks us to fill the role: When awful things are happening, we can't look away, even if there is nothing we can do. Attention confers dignity in suffering. In a world that feels desperate, chaotic, and unredeemable, Melmoth asks us to be witnesses for each other.