Accessibility links
Review: Melissa McCarthy Forges Ahead In 'Can You Ever Forgive Me?' Melissa McCarthy plays a real-life literary forger left behind by the publishing industry in a new and thoughtful comedy. 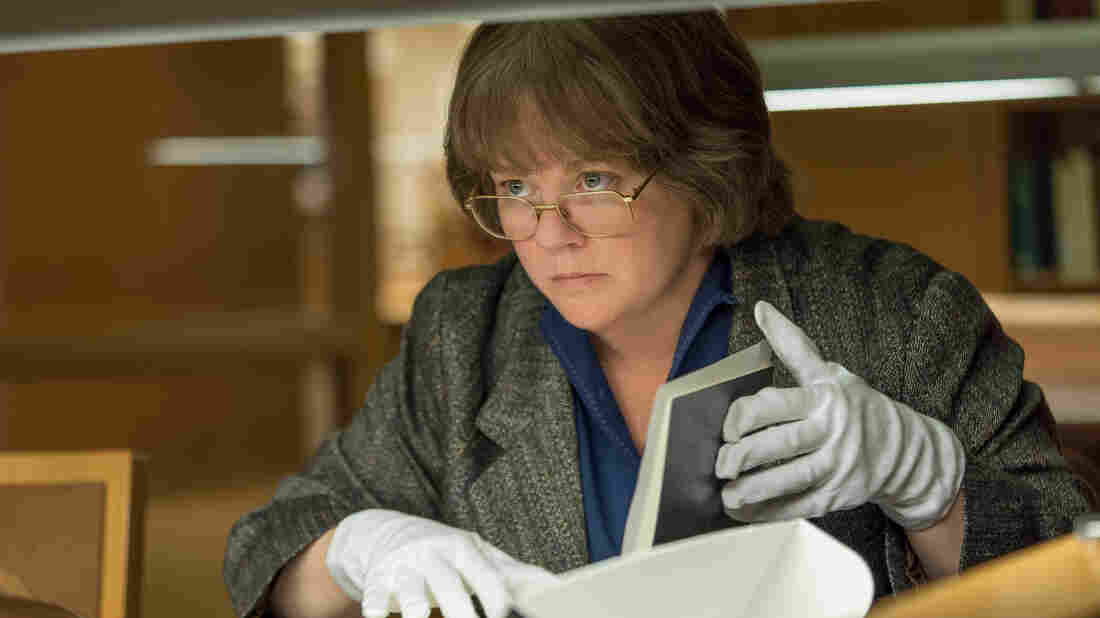 Forging Ahead: Melissa McCarthy is Lee Israel in Can You Ever Forgive Me? Mary Cybulski/Twentieth Century Fox hide caption 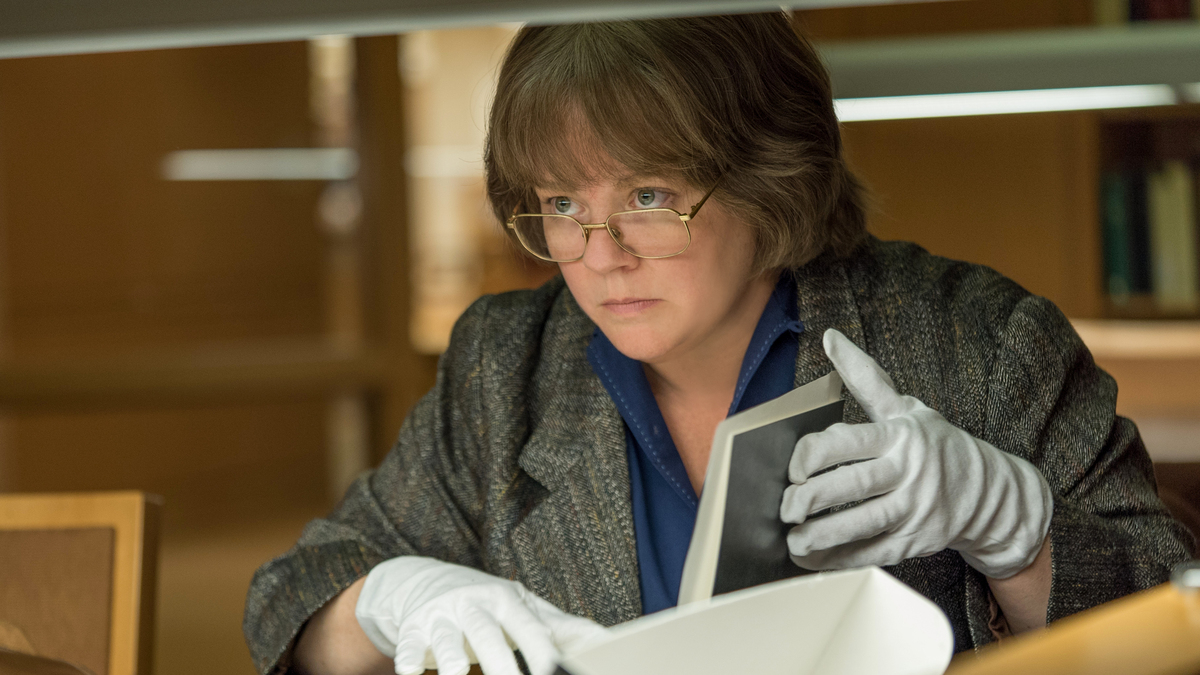 Forging Ahead: Melissa McCarthy is Lee Israel in Can You Ever Forgive Me?

You know about A Star Is Born, right? One enormously famous and successful celebrity fades; one rises. But here's a question: What percentage of creative people will ever get to be either of those? What percentage will experience a great rise or a great fall? How many will simply work, often undervalued and insulted, sometimes praised, for a moment, before being shoved aside? What about the invisibility that follows even fleeting encounters with modest success?

If you ask these questions about writers rather than musicians, you'll find one answer in the new film Can You Ever Forgive Me?, directed by Marielle Heller (The Diary Of A Teenage Girl) and written by Jeff Whitty and Nicole Holofcener. Melissa McCarthy plays Lee Israel, a (real) author who experienced a brutal career stall-out in the late 1980s. And the film, based on Israel's spirited memoir, tells the story of how she became desperate enough, and frustrated enough, that she began forging and selling letters she claimed had been written by Louise Brooks, Noel Coward, Dorothy Parker and others.

For the most part, this is a nicely sharp character comedy that openly admires Israel's intelligence and resourcefulness and relishes the ingenuity of her multiple vintage typewriters and her hunts for the perfect paper. It focuses on the period in which she sold her letters to private dealers, which is the part she makes clear in her memoir she doesn't feel terribly bad about. (She shows, in the book, more discomfort with the later phase in which she began stealing real letters from university libraries and replacing them with fakes so she could sell the originals. Among other things, the creative element was absent.)

But there is also a deep sadness to the way the literary world turns its back on Lee Israel, losing all interest in the work she wants to do and growing tired of her curmudgeonly personality — which, as she notes, might well not be an issue if she were a man. Her agent, played perfectly by Jane Curtin, says that only success gives authors the right to be jerks, and Lee hasn't had enough success for that. But why, Israel wonders, does the world have an unrelenting appetite for Tom Clancy, whose work she describes in ... unflattering terms?

There is, too, a loneliness that comes with Israel's status as an older queer woman in a New York City where she can go to gay bars and she can date women (she dearly misses an ex played beautifully, if briefly, by Anna Deavere Smith), but she doesn't feel embraced, exactly. As with her career, she seems to feel almost too insignificant to be rejected; she's simply hibernating.

Lee's closest confidante in the film — and eventually her partner-in-crime — is her friend Jack (Richard E. Grant), who is himself wandering around a city that doesn't seem to have a place for him, and where he's from time to time beaten up or otherwise mistreated by the young men he takes home. He, too, is lonely, and Lee's escapades at least give him something fun to do.

In fact, the crime spree, such as it is, gives the two some version of useful work, as much as anything. Israel may be forging, but at least in the beginning, she's also writing. In fact, she says in her memoir that she considers the letters she wrote as a forger to be her best work. She was blending research and real facts with utter invention — using a combination of her creative skills and her skills as a biographer in helping a reader understand who a person really was. This is not to say it was honest, but at least in the early going, Israel was mostly taking advantage of wealthy collectors with the somewhat unseemly hobby of purchasing other people's private papers they were never meant to see. The crimes against universities obviously have a different scope, but the film seems to consider the collectors and dealers little better — little more moral — than Israel herself.

McCarthy has often been showcased in roles that are either very cheerful women she imbues with comic dismay or very odd ducks she plays with relish and no vanity. Israel is different; she is rather ordinary. McCarthy is well-suited to the character's mercilessly sharp tongue (a quality evident in Israel's memoir), but also to her isolation. You see many characters driven by rage and self-pity, often to the point of violence or meanness. Israel is driven by a sense that the world should not treat her this way because it should not treat anyone this way, as if they are invisible, forgotten, unimportant.

There are likely to be those — literary historians and archivists, to name two constituencies — who may be appalled by the film's fondness for Lee Israel. But a surprising number of engaging details — a TV used as a lightbox for tracing, a prank played on a nasty bookseller — are taken directly from Israel's own memoir. She does come off as pretty endearing. You know, assuming it's all true.