Accessibility links
Poll Finds Wide Partisan Gaps On America's Biggest Problems A new Pew poll shows that there are few issues that Democrats and Republicans agree need to be fixed — and even then, they often don't agree on how to fix them.

Activists march to the offices of Sens. Chuck Schumer and Kirsten Gillibrand in New York City in September 2017, just before the start of Senate hearings on stabilizing the Affordable Care Act. Pacific Press/LightRocket via Getty Images hide caption

Activists march to the offices of Sens. Chuck Schumer and Kirsten Gillibrand in New York City in September 2017, just before the start of Senate hearings on stabilizing the Affordable Care Act.

Especially as the midterm elections approach, there's an unavoidable stream of news about politics in crisis: words like "polarization" and "tribalism" paint a portrait of voters retreating intransigently to their respective corners (or, more accurately, social media bubbles).

A new poll gives a clearer picture of what that "tribalism" looks like: Americans differ not just on their ideology or political team, but on the issues they view as problems.

Pew presented registered voters with 18 issues, asking those voters how big of a problem each issue is.

Voters supporting Democrats for Congress this year were far more likely to see most of these as problems, with majorities saying 13 out of the 18 issues are "very big" problems.

Republican supporters are more content. There were only five issues of the 18 that majorities of Republicans identified as "very big" problems. Only one area Republicans designated featured a wide gap: three-quarters of voters supporting GOP candidates see illegal immigration as a very big problem, compared with only 19 percent of Democrats.

The results highlight, first of all, a Democratic Party that's very uneasy with how much is at stake in an already closely watched midterm election. The poll underlines that whoever controls Congress next year will determine which areas will and won't get attention. And the two parties' priorities are starkly different. 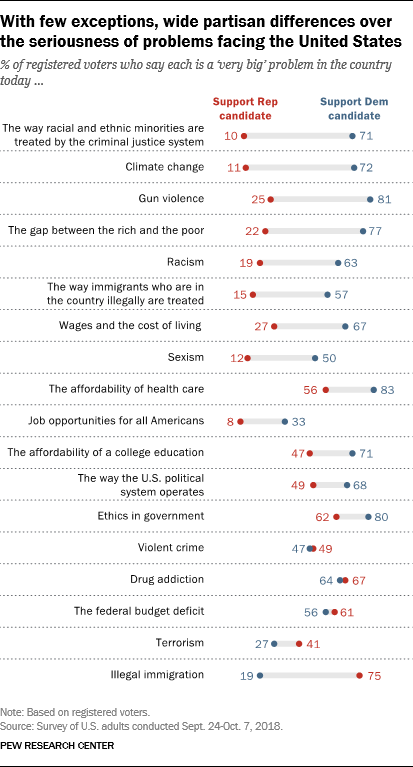 There were only four areas that majorities of both parties agreed are "big problems": affordable health care, ethics in government, drug addiction, and the federal budget deficit.

(Democrats were significantly more likely to see health care and ethics as "very big" problems than Republicans do.)

But even when both parties agree that a problem exists, they often disagree on how to solve it. Roughly 6 in 10 Democrats and Republicans alike, for example, said that the federal budget deficit is a "very big" problem.

But then, Republicans' recent tax overhaul helped balloon the deficit, leading to a recent 31 percent drop in corporate tax revenues, as NPR's Scott Horsley reported. When it comes to shrinking the deficit, Republicans tend to advocate for cutting entitlement programs — something many Democrats strongly oppose.

Likewise, the parties have shown they have different ideas about what constitutes an "ethics" problem in government. Republicans were outraged at what they said was unfair Democratic treatment of Brett Kavanaugh during his recent Supreme Court nomination fight. Democrats, meanwhile, have been furious since Trump's election about the many potential conflicts of interest that he faced as a business owner becoming the president. They also point to two recent federal indictments of House Republicans running for re-election who were early Trump supporters.

Some of these problems the parties identified have heavily shaped this year's midterms: Republican candidates are campaigning heavily on immigration, while most Democrats have made health care the policy centerpiece of their midterm election bids.