Accessibility links
Spacecraft BepiColombo Poised For Mission To Mercury The European Space Agency's BepiColombo will take seven years to reach the innermost planet in our solar system, where temperatures at the surface can reach 800 degrees Fahrenheit. 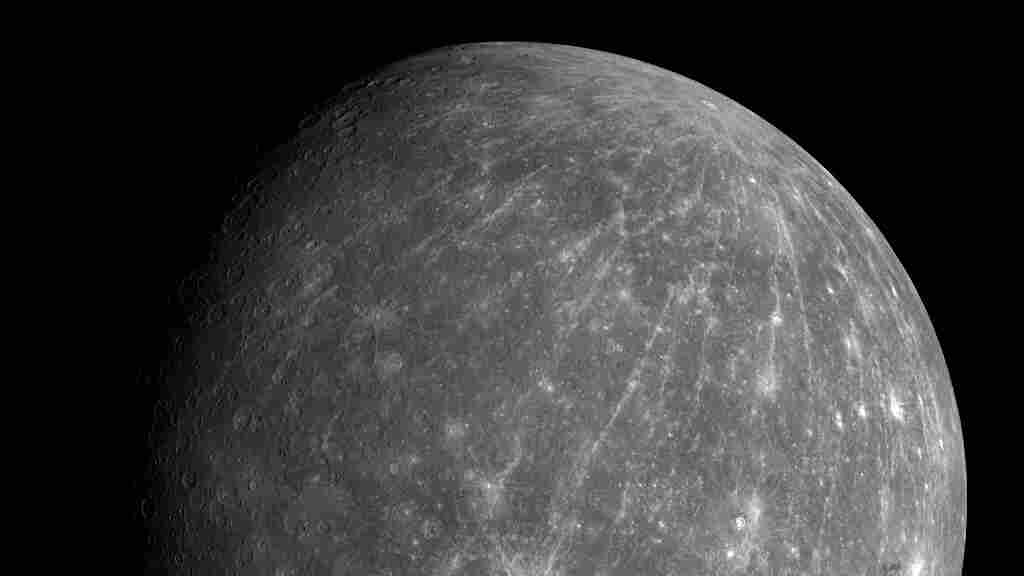 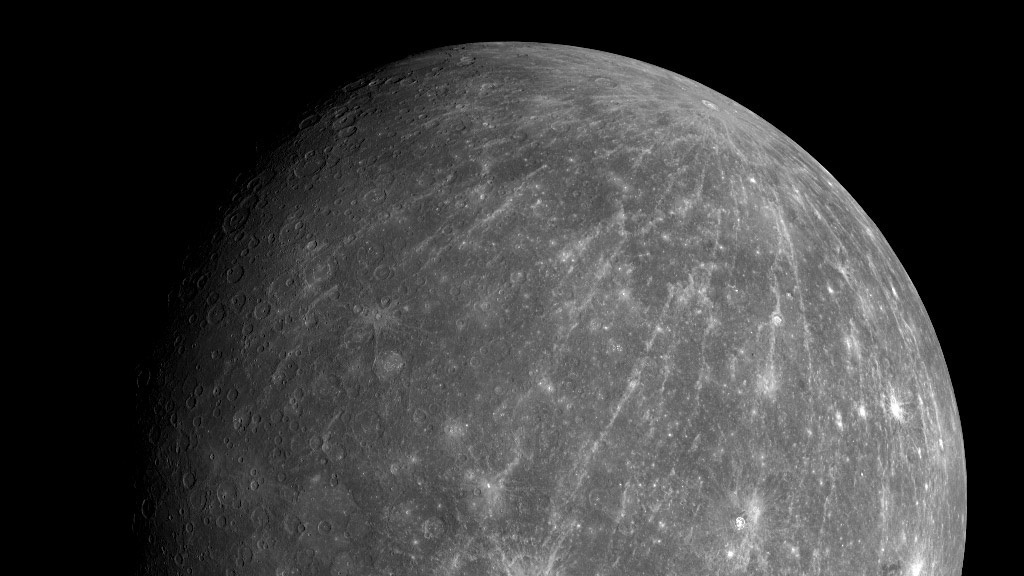 This October 2008 photo shows Mercury during the Messenger spacecraft's second flyby of the planet. The European Space Agency's BepiColombo will take seven years to reach the innermost planet in our solar system.

The European Space Agency is sending a mission to explore the mysteries of Mercury.

BepiColombo, named after the Italian mathematician and engineer Giuseppe "Bepi" Colombo, launched at 9:45 p.m. ET Friday aboard an Ariane 5 rocket from a spaceport in French Guiana.

The spacecraft is actually made up of two probes: One will go into orbit close to the planet, while the other, supplied by the Japan Aerospace Exploration Agency, will orbit farther away, measuring Mercury's magnetic field.

"What this lets you do is look at that space environment around Mercury from two different perspectives at exactly the same time," says Nancy Chabot, a planetary scientist at the Johns Hopkins University Applied Physics Laboratory. That gives a clearer picture of what's changing during the 88 days it takes Mercury to make one revolution around the sun.

Mercury also has an unusual composition. Like Earth, it has a metal core. But Mercury's metal core takes up 80 percent of the planet.

"You can imagine it as a giant metal ball surrounded by a little bit of rock on the top," Chabot says.

One of the most intriguing things about Mercury is that despite the blistering temperatures on the sunny parts of the planet — temperatures that can reach 800 degrees Fahrenheit — there are places in craters near the poles that never see the sun.

"In these permanently shadowed regions," Chabot says, "it is cold enough that water ice is stable for billions of years."

Radar measurements from Earth first suggested that there was ice on Mercury. Earlier this decade, NASA's Messenger mission was able to confirm that the ice was actually there.

But Messenger only came close enough to see the ice at Mercury's north pole. The real icy action, Chabot says, is at the south pole.

"The largest crater to host these water ice deposits is right smack dab at the south pole of Mercury," she says. "And so I'm very excited that BepiColombo is going to be in an orbit that passes much closer to the southern hemisphere."

BepiColombo will take a rather circuitous path to Mercury. It will fly by Earth once, Venus twice and Mercury six times before it is in the right orientation to go into orbit around the innermost planet in our solar system. The entire trip will take slightly more than seven years.

And there's another feature on Mercury that Chabot is particularly curious about.

"The crater made by Messenger," she says.

Chabot was one of the scientists on the Messenger team. As the spacecraft was running out of fuel, mission managers decided to send it crashing into the planet, where it made a crater estimated to be about 60 feet across.

"Once BepiColombo gets into orbit, they should be able to target that area, take the highest resolution image they possibly can, and we might be able to see Messenger's final resting spot."

It's more than sentiment that makes Chabot curious about the crash site. Messenger's impact will undoubtedly have tossed up a lot of debris.

"And we might be able to learn something about that freshly exposed material," she says. "So it's kind of fun to think that even in its demise, Messenger could still contribute to advancing our knowledge of Mercury."