Accessibility links
Review: 'Sabrina' Has A (Cloven) Foot In Two Worlds Mad Men's Kiernan Shipka ably carries the Riverdale-adjacent series on Netflix about a young woman who's half mortal, half witch and all hero. 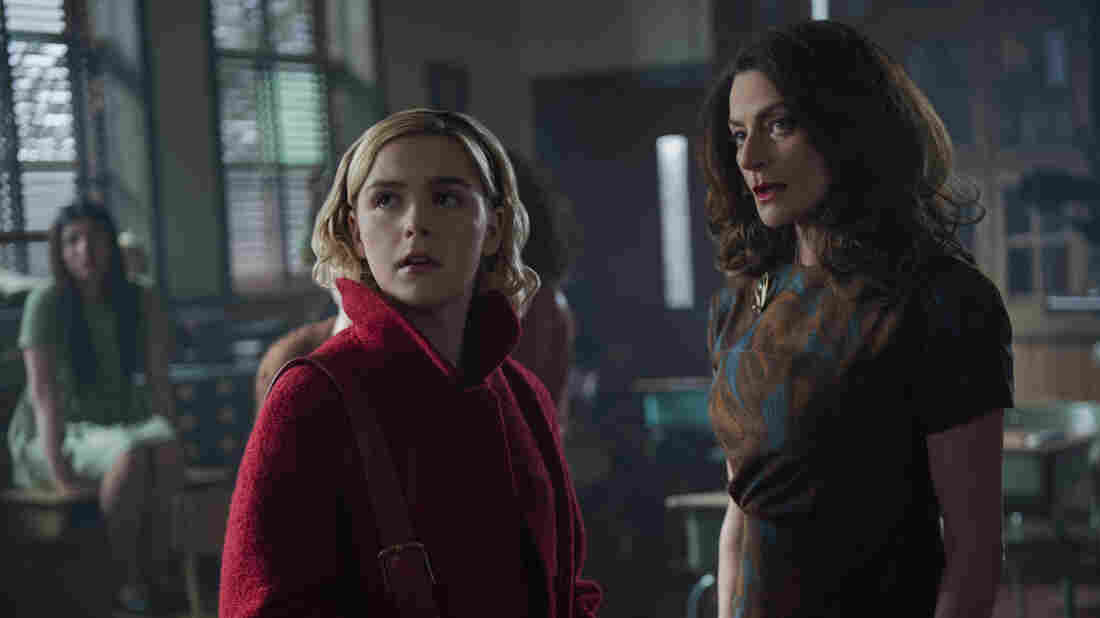 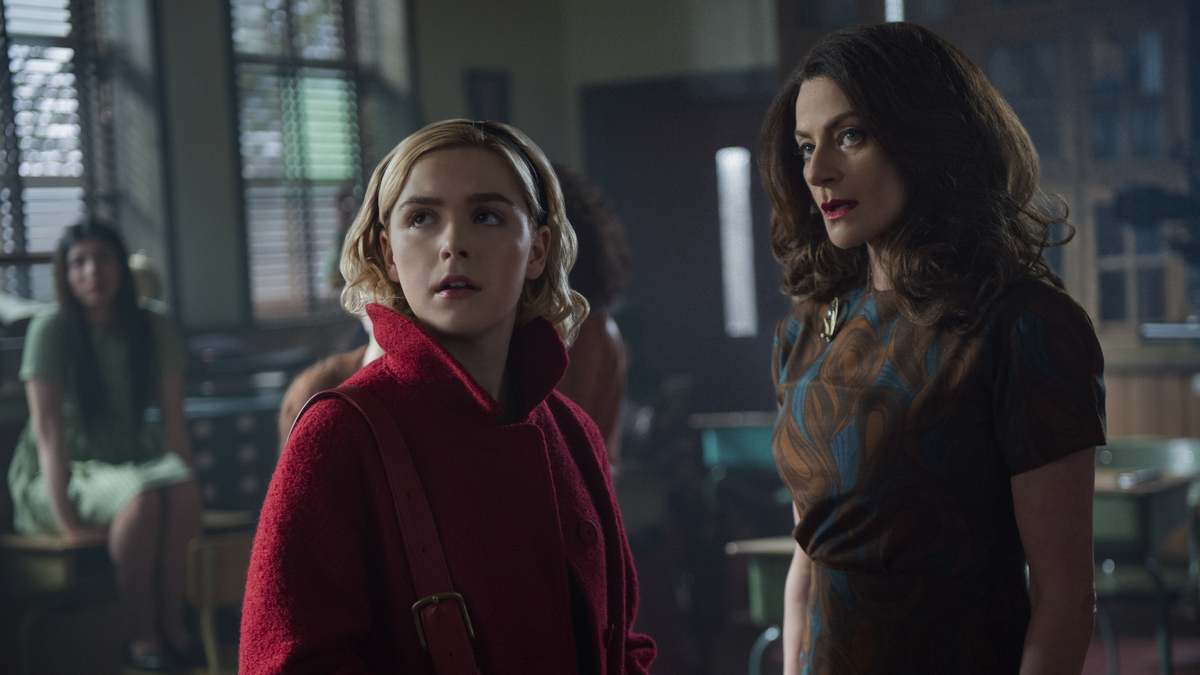 That's the reminder scrawled into the Oct. 31 box of the wall calendar in the bedroom of Sabrina Spellman.

Look, just reconcile yourself to the fact that your tolerance for on-the-nose nomenclature (Sabrina's mentor is called Miss Wardwell, the local ophthalmologist is Doctor Spector, etc.) is gonna get severely tested. That's due in part to Chilling Adventures of Sabrina's roots in the sunlit, kid-friendly, primary-color world of Archie Comics. (The Netflix series is technically an adaptation of a decidedly not-for-kids Sabrina comic of the same name launched in 2014 from the publisher's Archie Horror imprint, which was written by series creator Roberto Aguirre-Sacasa with art by Robert Hack.)

Similarly epi-nasal are the Riverdale-adjacent series' music cues, which: oof. Think of a song with the word "magic" in the lyrics, and odds are good that it — or at least a cover of it — is gonna get dredged up at some point during these first 10 episodes. Clearly, the show's music supervisor rules with a hammy fist.

But let's go back to that calendar entry.

That right there is Chilling Adventures of Sabrina's mission statement, distilled to its essence. (It's also a pretty solid joke, just on its face.)

If you're on board — really, really on board — for both halves of it, you're going to enjoy the series, which got picked up for a second season months before this first season dropped.

Tackling them in turn:

This is a high school series about a young girl's coming of age. The happy fact that said young girl is played by Mad Men's Kiernan Shipka tells you a few things from the jump.

First, you're gonna be on Sabrina's side. Shipka is great here: The startling promise she showed on Mad Men has matured into bona fide acting chops. She infuses the character with a confident, self-assured strength; a headstrong desire to make her own choices; and a keen, grounded intellect.

Second, you're gonna stay on Sabrina's side, even though, to be honest, she's ... a bit of a pill. That confident, self-assured strength spills over, from time to time, into "Only I can save the day" exceptionalism. That headstrong desire to make her own choices shades into stubbornness, and that keen, grounded intellect into know-it-allism. Shipka lets all that spilling, shading and nuance slosh around together, but she never loses us, because she locates an appealing vulnerability underneath the confidence.

That said, neither she nor the character she plays is particularly funny. And when the series she's shouldering owes as much to Buffy the Vampire Slayer as this one does (read: just a whole lot), that absence is felt. (Later-season Buffy Summers was a dour drip, yes, but Sarah Michelle Gellar remained a deft hand with a quip.) The series, undaunted, shunts the much-needed humor off onto actors more at home with it, like The Office (U.K.)'s Lucy Davis as Sabrina's dithering Aunt Hilda, as well as — especially and wonderfully — onto Sabrina's scheming mentor/secret antagonist Miss Wardwell (Doctor Who's Michelle Gomez, who lovingly chews her every line like tender morsels of marbled ribeye).

As in the comics, and the beloved-by-those-of-a-certain-age Melissa Joan Hart sitcom Sabrina the Teenage Witch, Sabrina is saddled with mortal love interest Harvey Kinkle; it's to actor Ross Lynch's enormous credit — and the character's melancholic backstory here — that Harvey doesn't come off as a stick-in-the-mud, dull-as-dishwater dud who impedes Sabrina's potential. (Which is to say: a real Darren.) Instead, he's supportive, vulnerable and, mostly, sad.

In the time-honored manner of high school shows, Sabrina's pals prove earnestly and nerdily woke: Roz (Jaz Sinclair) and Susie (nonbinary actor Lachlan Watson) face down bullying and other issues of the day while tossing out pop culture references. It's in these storylines that the series struggles most visibly to escape Buffy's long shadow.

And speaking of shadows:

Let's be clear: Chilling Adventures of Sabrina isn't merely steeped in the occult. It's drowning in it.

Sabrina, on the other hand, doesn't truck with vague, winking, hand-wavy allusions to "the fallen angel" of Milton and Dante. Neither is it about Wicca, or a kind of scrubbed, Bewitched/Bell, Book and Candle/Sabrina the Teenage Witch species of white magic. The Big Bad is not some generic "demon from the pit." No, he's the real, Judeo-Christian biblical deal. As in, the full-bore, goat-headed, cloven-footed capital-D Devil — complete with followers who are depicted murmuring "Praise Satan" the way most people say "Gesundheit."

Some viewers expecting the bright, silly magic of the original Sabrina comics, the Hart sitcom, or even Buffy's darker (but still carefully couched) parade of demons as metaphors may be taken aback by the series' eager embrace of pentagrams and perdition, and wonder if the show glorifies satanism.

The answer will always be a personal judgment call, but it's worth noting that while Sabrina shows characters worshipping Satan in exchange for the ability to wield dark powers, and has them espouse Anton LaVey's It's about free will, not good and evil party line, it depicts the actual lived life of a coven member as ... kind of a bummer. Sabrina's fellow members of the Church of Night are hemmed in by bureaucracy, bylaws, murky tradition and deceit. It's as sexy as a condo board. But evil.

The series also makes a choice to place our hero Sabrina, who belongs in both the mortal and witch world, in a kind of stealth opposition to the Church of Night while still availing herself of its powers. No, it won't be enough to allay the concerns of viewers who would condemn any depiction of the occult, especially one as full-throated as this one — but it's something.

The show's magical subject matter brings with it the (too) usual trappings and devices. There is, it will likely not surprise you to learn, a Prophecy. There is also a Destiny To Be Embraced. Where death is concerned, there is a Balance That Must Be Maintained. (If the nigh-inevitable and deeply regrettable phrase "The Chosen One" came up at any point, I either missed it or deliberately erased it from my memory.)

And while its characters do make pop culture references, as mentioned above (including real groaners such as, "penny dreadful for your thoughts," which: NOPE), they don't do so at anything like the stylized breakneck pace made famous by Buffy. Instead, the show employs thematic and visual references to that show, and many, many other familiar occult narratives. Here's a shot from The Exorcist, or The Witch. Here's a plot element borrowed from Rosemary's Baby, or The Masque of the Red Death. Here's a bottle episode that owes so much of its structure to Buffy that you find yourself idly wondering how litigious Joss Whedon might be feeling nowadays.

Aguirre-Sacasa, the creator, made his bones as a playwright and drops several theater-people Easter eggs into the mix. Characters unwittingly mouth scraps of dialogue from Our Town and Angels in America. The town's bookstore owner, we learn, used to work as local late-night monster-chiller-horror TV host Dr. Cerberus, a character from a 2010 play ... by Aguirre-Sacasa.

And it's not just plays. In the pilot, a bat crashes through Sabrina's bedroom window. The show waves it off as an ill omen, but you'd be forgiven for half-expecting Sabrina to react by donning a cowl and cape and waging a one-woman war on crime.

And in a way, she kind of does.

What none of the trailers or press materials will tell you is that Chilling Adventures of Sabrina is, at its black heart, a superhero show.

To wit: Sabrina has powers, and she chooses to use them, consistently, to help her friends — to punish those who would harm them, and to ease their pain.

In the first half of the season, things come awfully easy to her, and she's unfailingly right about everything. The show's smart enough to realize this, however, and has her friends call her out on it; as the season progresses, she starts to screw up, with big, bad consequences that serve to give the last few episodes a momentum, and a real sense of danger, that are missing from earlier in the season.

Which is to say: Yes, the series suffers from classic Netflix bloat, but it's forgivable here because most of the tangents and detours the series explores over the course of its first nine episodes actually factor into the season finale, which changes the game in a satisfying way and sets up the next season nicely.

And even when it feels like it's treading water, you have to admit that the water's refreshing. This show just plain looks great, from Sabrina's severely (and hilariously) gabled house to the most sumptuous public school library imaginable (it has a roaring fireplace, which has to be a code violation), to the mist-shrouded woods which, yes, have been featured in every serialized television show that shoots in and around Vancouver for decades.

If this first season of Chilling Adventures of Sabrina doesn't seem particularly interested in stepping out of Buffy's long shadow, that's fine — but now that we've established the world, the players, and the central conflict(s), here's hoping season two will give the series a chance to find its own voice, and step out into the light.