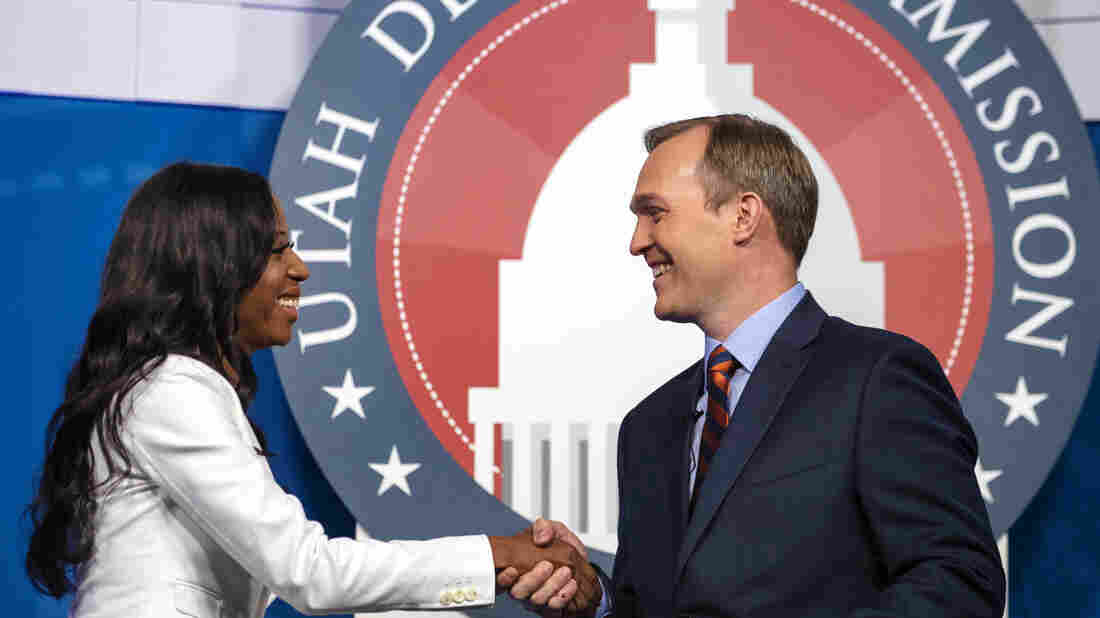 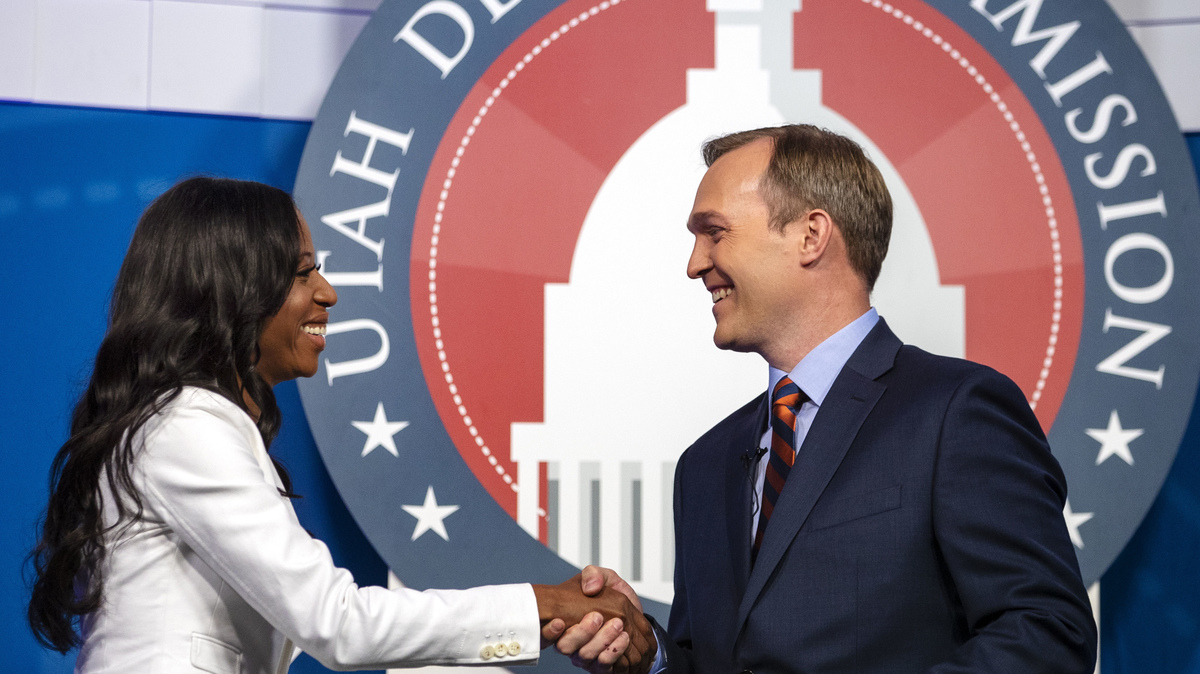 In his very first answer in the recent debate between the candidates for Utah's 4th Congressional District, Ben McAdams launched into a political origin story about his first encounter with burdensome government regulations.

The mayor of Salt Lake County told the audience about how he worked four jobs one summer during college to earn some extra income. "Imagine my disappointment the following year when I was notified that I was denied federal student aid because I made too much money," he said. "Government regulations and rules, they don't always make sense. And they don't always reward us for doing the right thing."

These kinds of anecdotes are common. It's just that they usually come from Republicans. McAdams is a Democrat and, according to a recent poll from the Salt Lake Tribune, he is locked in a dead heat with Republican Rep. Mia Love.

For all the attention that the Democratic Party's national leftward lurch has gotten over the past two years, it's moderates like McAdams, running in Republican-leaning districts, who could put the party back in control of the House of Representatives.

Democratic candidate stresses he will work with Trump

In an interview with NPR, McAdams said he would give the Trump administration "mixed reviews." He paused for a few moments before continuing. "I will work with the Trump administration when I think it's good for this country, when it's good for Utah," he said. "I'll be there. I think we do need an infrastructure package to invest in local roads and bridges. I want to be part of that."

McAdams criticizes Trump, for sure — on immigration policy, health care and other fronts. But like many Democratic candidates running in close contests this year, he is not regularly railing on Trump on the campaign trail. He is leery about pushing for impeachment, wanting to wait for not only the conclusion of special counsel Robert Mueller's investigation but for a bipartisan consensus on any congressional response. "When you're considering overturning the results of an election, that is a very serious thing," McAdams said. "And it should be an issue of last resort, and it shouldn't be done on a partisan basis."

All of this is no accident. The county official and former state senator knows that while Democrats in other competitive House races have debated the tactical merits of working to energize and turn out the liberal base, compared with appealing to Republican voters to switch sides, he has no choice. Republicans have a 13-point advantage in this suburban Salt Lake district, and he needs to get them to cross the partisan divide.

"The votes I need to win this election I've gotten twice before," he argued, pointing to county election results. "I just need to reassure those people that I'm not going to change. I'm going to be the same person as a member of Congress that I've been as mayor."

Love argues she is an independent voice

McAdams also has to persuade voters to dump Love, a two-term lawmaker who gained immediate national attention by being the first-ever black woman elected to Congress as a Republican.

Love is conservative, but running in a tight race, she has repeatedly framed herself as a pragmatist and an independent voice. "I have built relationships on both sides of the aisle," she recently told the Salt Lake Chamber at a candidate forum. "I'm the only one in this delegation who has stood up to the president when he has done something wrong and have worked with him when he's done something right," she proclaimed during the debate with McAdams.

The approach reflects Utah Republicans' continued uneasiness about Trump. (Trump won the district's vote in 2016, but with only 39 percent; 22 percent of the 4th District broke for independent conservative candidate Evan McMullin.) While Love repeatedly voted for Republican priorities in the House, and aggressively defends the Trump-signed GOP tax overhaul and last year's attempt to repeal the Affordable Care Act, she has highlighted the times she criticized Trump's statements or actions.

When Trump memorably referred to African nations and Haiti with a vulgar term during an Oval Office meeting on immigration, Love demanded an apology, calling the statement "unkind, divisive, elitist, and [flying] in the face of our nation's values." She was one of the first Republicans to try to force a House vote on a measure providing a permanent solution for the Deferred Action For Childhood Arrivals program — a move Trump repeatedly blocked by demanding legal immigration changes Democrats won't support. During the debate she called Trump's policy of separating the families of people who enter the country illegally "absolutely horrific."

Republicans Join In Condemning Trump's Use Of Expletive To Describe Africa

Occasional statements from congressional Republicans chiding Trump's tweets, comments and, less frequently, policies are, of course, a common theme of the past two years. All the while the House and Senate have gone along with the president's policy pushes and declined to provide any significant oversight of the Trump administration.

But as the party becomes more and more Trumpcentric, occasional criticism from another Republican on the campaign trail is rare. Indeed, many of the other GOP lawmakers who publicly split with Trump or criticized him opted to retire this year, rather than run again. Others, like Nevada Sen. Dean Heller and South Carolina Sen. Lindsey Graham, have shifted gears to become close Trump allies.

What's At Stake For President Trump With The Midterm Elections?

Given all that, Love's campaign is one of a handful of test cases on whether voters will reward a lawmaker for an arms-length embrace of the White House.

McAdams has repeatedly dismissed and criticized Love's balancing act. "Words are one thing. Actions and outcomes are another," he said again and again during their debate.

"I don't get credit for what I try to do or what I say I want to do," he told NPR. "I'm judged based on what I accomplish. And we need to hold the same standards to our representatives in Congress."

As the race has tightened, Love has utilized the Republican strategy of arguing that a vote for McAdams is a proxy vote for a Nancy Pelosi speakership. That's despite the fact McAdams has promised to oppose Pelosi, if he makes it to Congress.

"If this seat turns over and they win the House, Nancy Pelosi will be speaker of the House," Love argued, while also pointing out that an anti-Pelosi vote could cost McAdams choice committee assignments in Congress.

McAdams is a vague on whom he would support for Democratic leader — "we need leadership that's going to prioritize healing," he said — but argued a Democratic takeover would shift the party's internal dynamics. "If the Democrats do take back the House it's because a lot of people like me win their elections," he argued, adding, "and these are people for who party does not come first, but solutions come first."

As Democrats lost election after election during the Obama era, the main casualties were moderates like McAdams. The centrist Blue Dog caucus shrank to near-extinction, while the remaining Democrats in office were pulled to the left along with the national party.

But while a majority of the current House Democratic caucus supports single-payer health care, the majority-making candidates who could flip Republican districts very likely will not.

That could lead to some tense intraparty dynamics in the next Congress, on everything from who should lead the Democratic caucus to how aggressively to investigate the Trump administration and what sort of stands to take on must-pass spending bills.

McAdam's suggestion for navigating all of that, should he end up in Washington: listen. "Public-policy making is complex. It doesn't lend itself to a hashtag, per se," he argued. "Ultimately, solutions are going to come from consensus building."