Accessibility links
When Immigration Status Puts Couple's Life 'At Pause' On their first date, Irakere Picon told Arianna Hermosillo that he was undocumented. He works as an immigration lawyer, and the couple, now married, face anxieties related to his status. 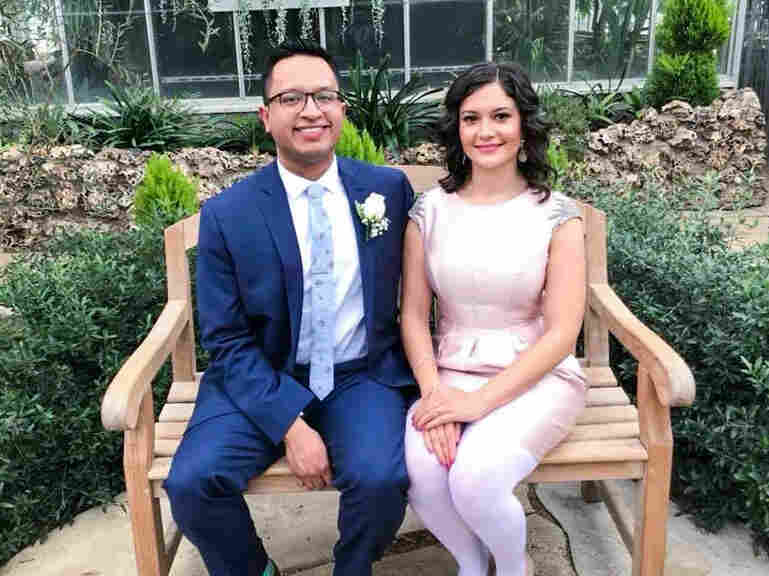 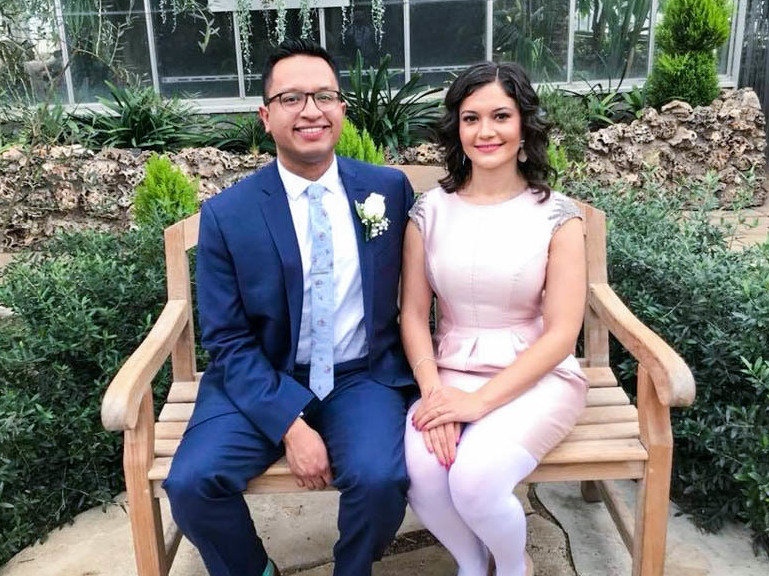 Irakere Picon, 29, and Arianna Hermosillo, 30, on their wedding day earlier this year in Oak Park Conservatory in Chicago.

Irakere Picon was just two years old in 1991 when his parents brought him to the U.S. from Mexico on a tourist visa. The family never left.

Picon grew up in Illinois, and in the summer of 2012, he applied for the Deferred Action for Childhood Arrivals program or DACA. Around the same time, he enrolled in Northern Illinois University College of Law in DeKalb, Ill. — and also met his future wife, Arianna Hermosillo. On their first date, he told her that he was undocumented.

"Did it make you feel apprehensive about dating me?" Picon asks Hermosillo, during a StoryCorps conversation.

"No," Hermosillo says. "It was almost like 'It's OK, it's cool,' but not even fully grasping what that meant. I was a U.S.-born citizen, and I think I didn't realize that I would start living some of that, indirectly, through spending time with you."

Picon is now an immigration lawyer, and his career, he says, heightens his awareness of his own status.

They Came To America And Found Love. But First, They Found 'Love' In A Dictionary

"It's weird to be undocumented. It's weird to be in those offices with somebody else who also is in the same situation," he says. "You've mentioned to me that sometimes you're scared or you're sort of nervous when I go into immigration court or when I go to ICE?"

"Because I imagine you going in there and talking smack and just kind of standing up for your clients, and I just imagine you saying the wrong thing," Hermosillo says.

She asks Picon if he has ever been afraid.

"I'm always afraid," he says. "When I went to my first ICE check-in with a client, it's on the fourth floor [of U.S. Citizenship and Immigration Services Chicago Field Office] and it is just completely packed to the brim and you cannot walk around. It's very hot, it's almost suffocating. Sometimes I'm curious if they know about my status."

Up until this year, Picon has had protected work status in the U.S. But that has not eased the anxieties he and Hermosillo feel about his status given the uncertain future of DACA during the Trump administration.

"It does weigh me down a little bit," Hermosillo says. "It is a very specific cloud hanging over us. It just feels like we're at pause. Travel plans are paused. Long-term plans are paused. We want to buy a house. We can't really take too many steps in any direction until we have this resolved. So, it is hard."

Although they were married earlier this year, it's unclear whether Pico will receive a green card and become a permanent resident.

"I wonder how you'll feel when you no longer have that title of undocumented person, but I'll be there with you, so I'm ready," Hermosillo says.