Accessibility links
Afghanistan Delays Election In Kandahar After Attack That Killed Police Chief The rest of the country will vote Saturday. But one journalist says that after a gunman pulled off a surprise attack in Kandahar, "there's a huge security vacuum, people are very nervous and worried." 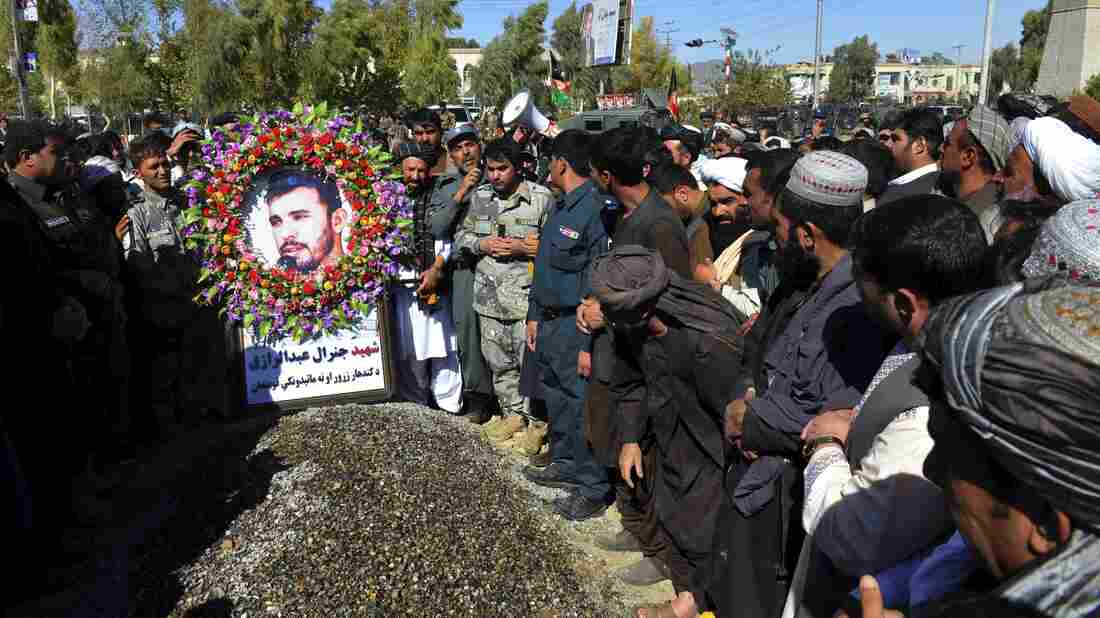 Mourners stand beside the grave of Gen. Abdul Raziq, the Kandahar police chief who was killed by a Taliban attack, during his burial ceremony Friday in Kandahar, Afghanistan. AP hide caption 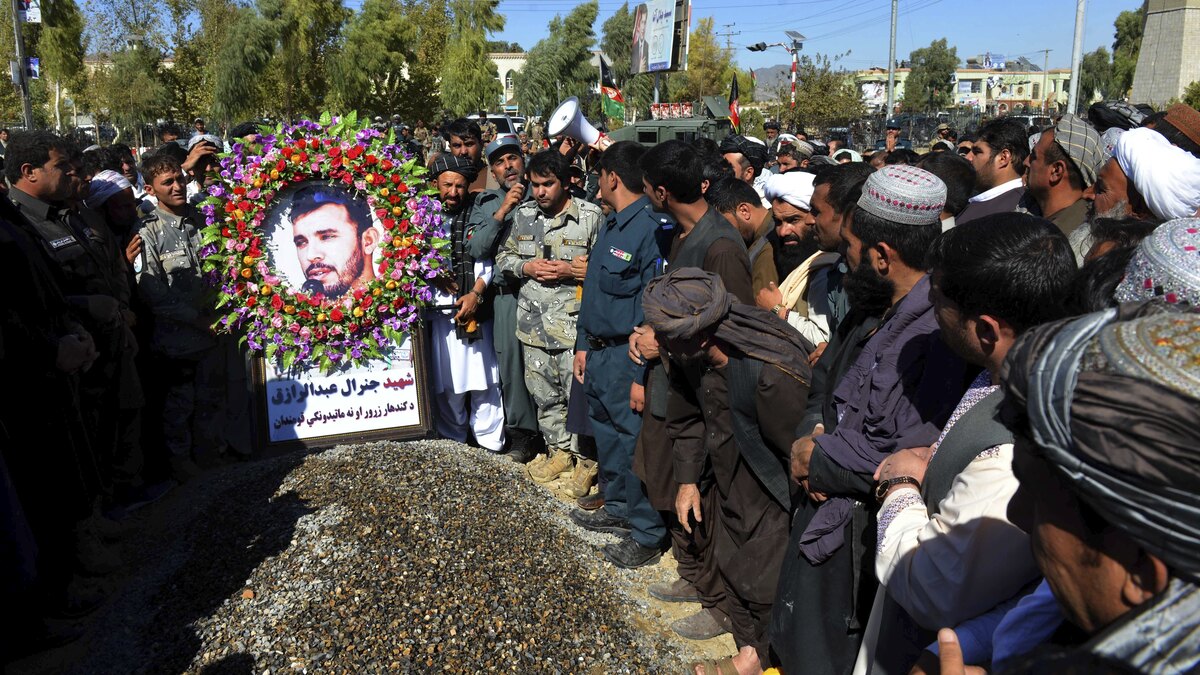 Mourners stand beside the grave of Gen. Abdul Raziq, the Kandahar police chief who was killed by a Taliban attack, during his burial ceremony Friday in Kandahar, Afghanistan.

Afghanistan will wait an extra week to hold elections in Kandahar, the large province where a Taliban attack killed the powerful police chief on Thursday. The violence came just two days before Afghan voters are slated to elect members of parliamentary seats.

The Afghan Independent Election Commission recommended postponing the vote during an emergency meeting that included President Ashraf Ghani and the heads of the country's intelligence and security agencies.

The Taliban says it is responsible for the death of Gen. Abdul Raziq, the Kandahar police chief who had long been an enemy of the militant group. The province's intelligence chief, Gen. Abdul Momin., also died in the shooting. The governor and another official were wounded.

Thursday's attack came at the end of a meeting between top Kandahar officials and Gen. Austin "Scott" Miller, the commander of U.S. and NATO troops in Afghanistan, who escaped unharmed. The leaders had convened to discuss how to ensure the safety of voters and candidates in the upcoming election.

Calling Raziq a friend with whom he'd worked for years, Miller said, "Afghanistan lost a patriot, my condolences to the people of Afghanistan. The good he did for Afghanistan and the Afghan people cannot be undone."

On Friday, Miller was seen walking the streets of Kabul, talking with security forces about making Saturday's election safe.

Ten candidates have been killed in the months leading up to Afghanistan's national election. But despite threat of violence from the Taliban, Pamela Constable of The Washington Post tells NPR's Steve Inskeep that the election has attracted "more than 2,500 candidates for 249 seats in parliament."

There has been a great deal of anticipation and excitement around the vote. Constable describes "a lot of positive campaigning, a lot of new fresh faces" — including 400 female candidates for office.

But concerns about violence and fraud have also taken a toll, she says, noting that many candidates have avoided holding large public rallies.

As the home of Afghanistan's second-largest city, Kandahar province is expected to play a vital role in any national election. But right now, Constable says, "there's a huge security vacuum, people are very nervous and worried."

The ultimate fate of the province's vote, she says, may hinge on how Saturday's election proceeds in the rest of the country.