Accessibility links
Dick Fosbury Turned His Back On The Bar And Made A Flop A Success Fifty years ago, a lanky Oregonian stunned the sports world with a backwards flop over the high jump bar at the Mexican Olympics. He won gold, and invented a new jumping style still used today. 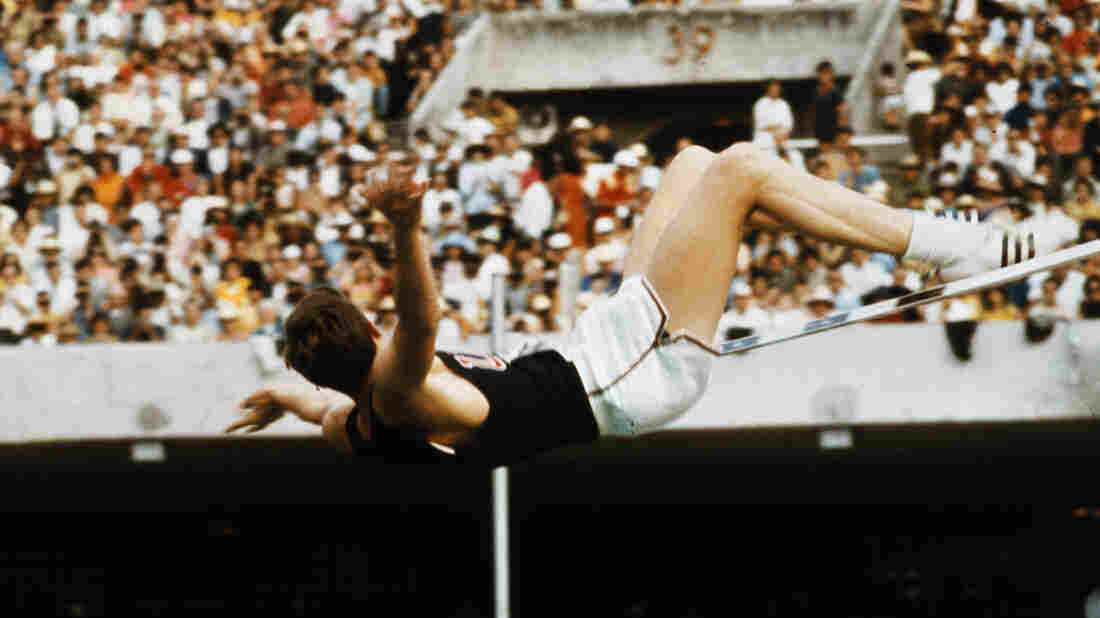 Dick Fosbury set an Olympic record as he cleared the bar in the high jump event at 7 feet, 4 1/4 inches in the 1968 Olympics in Mexico. Bettmann/Bettmann Archive via Getty Images hide caption 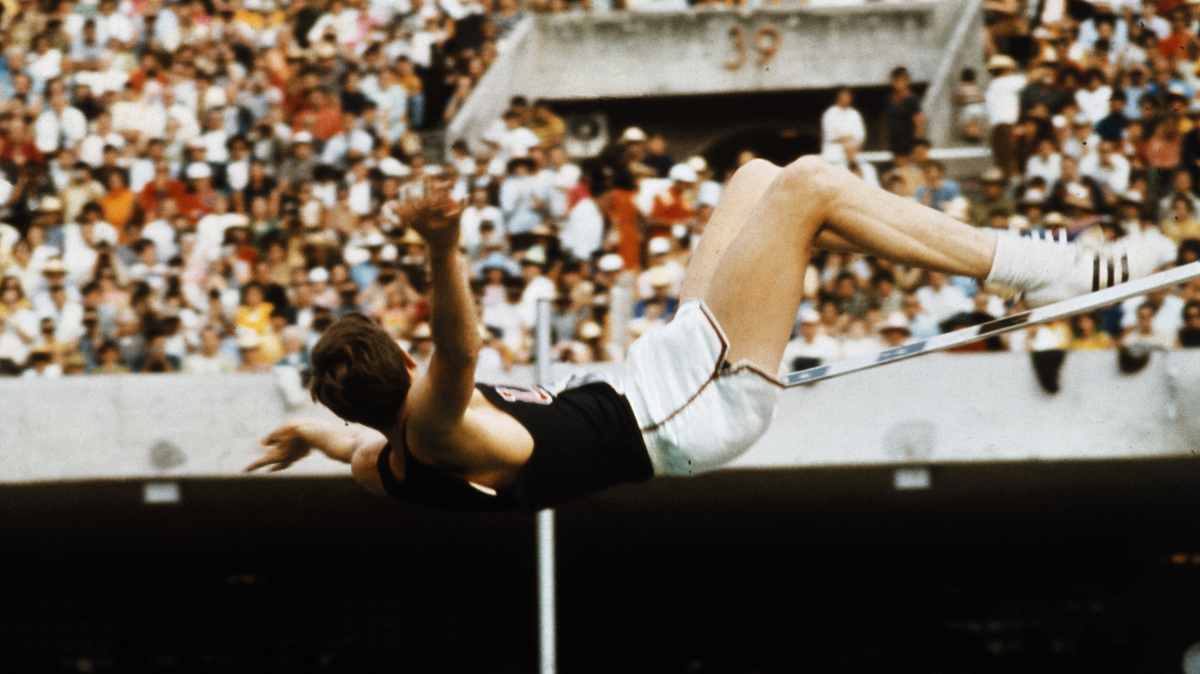 Dick Fosbury set an Olympic record as he cleared the bar in the high jump event at 7 feet, 4 1/4 inches in the 1968 Olympics in Mexico.

The 1968 Mexico City Olympics often are remembered for the victory stand protest by U.S. athletes Tommie Smith and John Carlos.

But there were iconic sports moments too.

And 50 years ago Saturday, Dick Fosbury, a lanky college student from Oregon, won the high jump in Mexico City, and revolutionized his sport.

For a man who professes to live in the moment, Fosbury has spent the past week deep inside the past. He's been on a tour, from Mexico City to his native Oregon, commemorating the day he confounded the sports world. 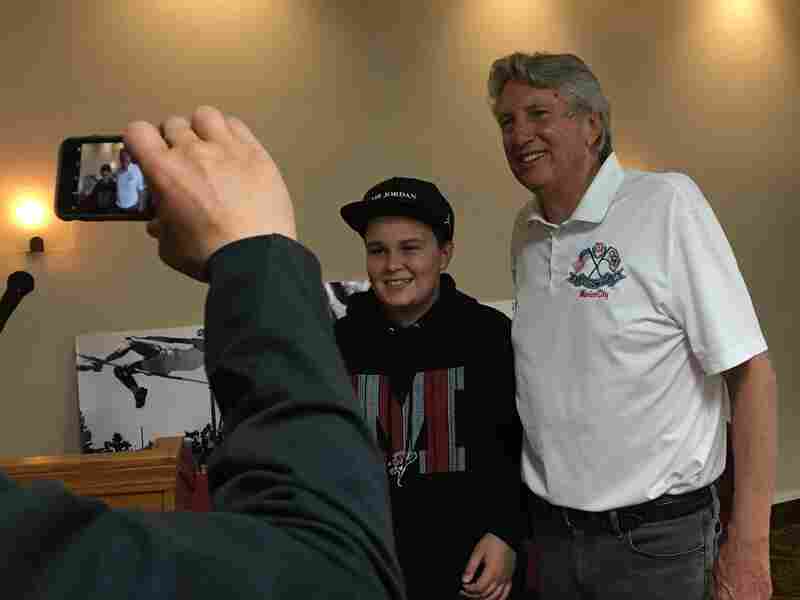 Former Olympic high jump champion Dick Fosbury poses with Cooper Cox of Medford, Ore. during a book signing appearance. Fosbury, who grew up in Medford, won the high jump gold medal at the 1968 Mexico City Olympics and set an Olympic and U.S. record at the time. Tom Goldman/NPR hide caption 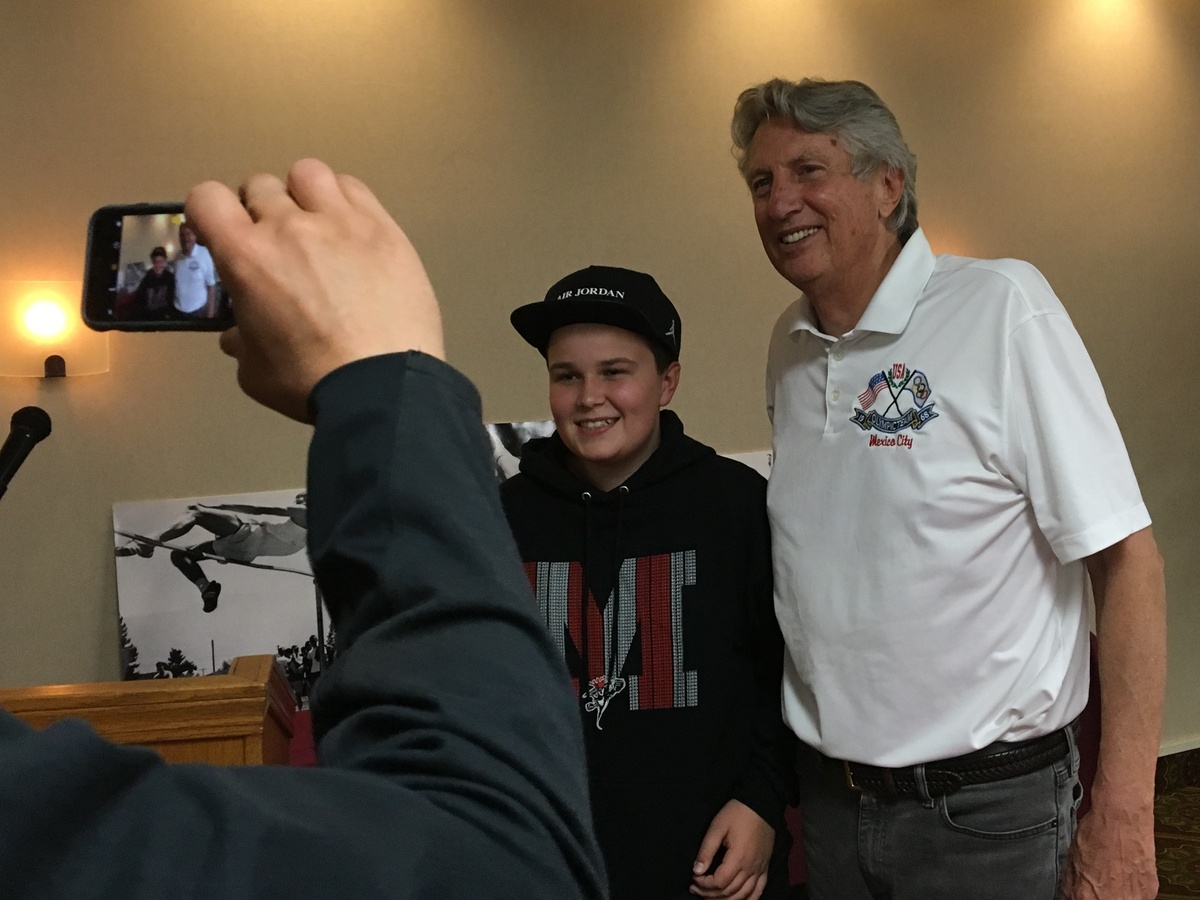 Former Olympic high jump champion Dick Fosbury poses with Cooper Cox of Medford, Ore. during a book signing appearance. Fosbury, who grew up in Medford, won the high jump gold medal at the 1968 Mexico City Olympics and set an Olympic and U.S. record at the time.

Fosbury jumped, shockingly at the time, with his back to the bar. His head and shoulders cleared the high jump bar first, his legs and feet trailed. The way every serious high jumper does it now.

But then? He was the first to do it internationally.

Fosbury remember the buzz he created that day in the Estadio Olimpico.

"They had started to notice me jumping at the early heights," he says, "and then everyone was telling all of their neighbors, 'watch this, watch this.' "

He remembers feeling "amazement and joy" after he cleared the winning height of 7 feet 4 ¼ inches. It was an Olympic and American record.

Fosbury celebrated. The crowd celebrated. And so did his track teammate Kenny Moore. Even though he was a bit pre-occupied.

"The marathon was finishing and [Kenny], after running 26 miles, was finishing his last lap," says Fosbury. "He had run past the high jump and he looked back, with all the cheering, saw me celebrating with my fist in the air, and he danced a little jig!"

"Ladies and gentlemen, here he is, Mr. Dick Fosbury! Welcome back home!" Author Bob Welch introduced Fosbury this week as he walked into a hotel conference room in Medford, Ore. Fosbury grew up in Medford, and his appearance was for a book signing he was doing with Welch. They collaborated on a new book, The Wizard of Foz: Dick Fosbury's One-Man High-Jump Revolution.

The room was filled with old high school classmates of Fosbury's and hometown admirers. One was 84-year-old Cees Garrett. She told Fosbury about how she cheered him on in Mexico City.

"I was one of the loudest voices [in the stadium] when you made your jump," she said.

She also had a close up encounter with Fosbury's gold medal. Garrett's husband was a dentist and Fosbury's dad was a patient. He brought in his son's medal one day, and Garrett got to try it on.

Fosbury's win was an impressive end to a start that some locals doubted.

"We thought, this is really weird," Garrett says, speaking about the different jumping style Fosbury developed during his high school years.

The skepticism was understandable. Back then, high jumpers used two styles, both facing the bar. The jumper either hurdled the bar doing a scissor kick with the legs, or rolled over the bar. Fosbury preferred the scissors, but in high school it wasn't working. He was losing a lot.

Then, at a 1963 track meet at nearby Grant's Pass, something happened. Fosbury knew he kept knocking off the bar with his rear end. During a jump, his body responded instinctively.

Lifting his hips, leaning back farther, Fosbury soared higher with each jump: 5 feet 6 inches, 5 feet 8 inches, 5 feet 10 inches. It was the start of a two-year evolution that ultimately had Fosbury doing a full back layout over the bar, while other high jumpers continued to lean forward.

When it all came to fruition, in 1968, the flop seemed to be a perfect metaphor for that tumultuous time.

"I mean Dick literally turned his back on the establishment," Welch says.

He needed his track team

But the reality of why Fosbury did what he did is far more basic. And powerful. His parent's divorce and younger brother's death left Fosbury desperately wanting to belong. He needed his track team.

"That was really a strong drive for me," Fosbury says. "First of all, stop losing, and second of all, to stay on the team. And if I was going to be different from everybody else, so be it. That would be the way that I play the game."

As he developed the technique, Fosbury says opposing coaches questioned whether it was legal. "It was completely legal," he says.

"When I got to the Olympics, though, that really was the first time where I began to talk to other coaches who insisted and told me I would never succeed with this technique I'd developed.

"All I could do was shrug my shoulders and say this is what I do and it's a game. Let's go see what happens."

Winning the gold medal in 1968 changed his life, Fosbury says. Even in the moments on the victory stand, he felt a new confidence. A new empowerment.

"After the [national] anthem was finished," he says, "I raised my hand and flashed the peace sign. [I] flashed the 'V' for victory sign. And even raised my fist in solidarity with Tommie [Smith] and John [Carlos] and the other athletes with the Olympic Movement for Human Rights.

"It was intentional that I felt united with athletes trying to demonstrate and give hope to people who don't have the same rights that we did."

At OSU, taking a leadership role

These feelings and attitudes didn't end when he returned to Oregon State University after his Olympic experience. Fosbury felt a new responsibility — he says he was expected to take a leadership role, and he did on a particularly controversial issue.

An African-American OSU football player, Fred Milton, was told by the head coach to shave off his beard. Facial hair was against team rules. Milton refused and was kicked off the team. It led to protests — not surprising during those volatile social times of the late '60s, early '70s. Fosbury waded into the fray.

"I got up and spoke in support of Fred," Fosbury says, adding, "I'd never been put in that position before. That was one of the hardest things I went through. It was the first time I spent sleepless nights over taking a position of how our culture and society should be."

Fosbury also lost support from some he had thrilled with his Olympic performance.

"[I] got a lot of letters from fans who now hated me because I stood with a black athlete over the coach," he recounts.

Fosbury says the situation ultimately was resolved. "But [it was] a huge distraction from classes and schoolwork," he says. "It was my senior year."

The Fosbury flop becomes the norm 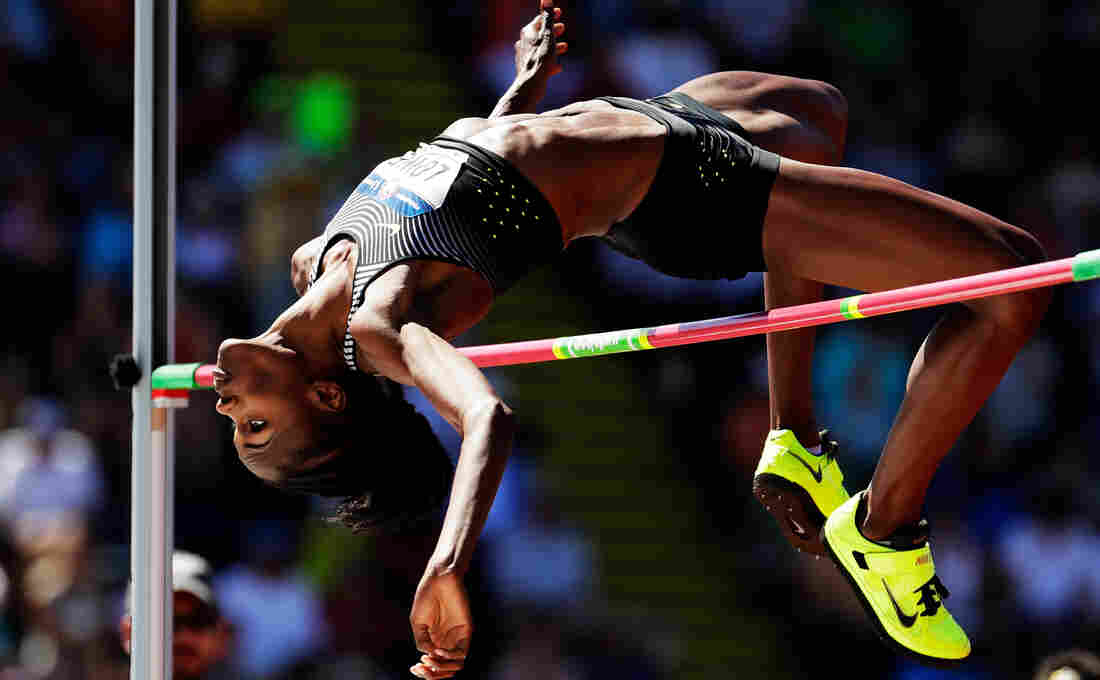 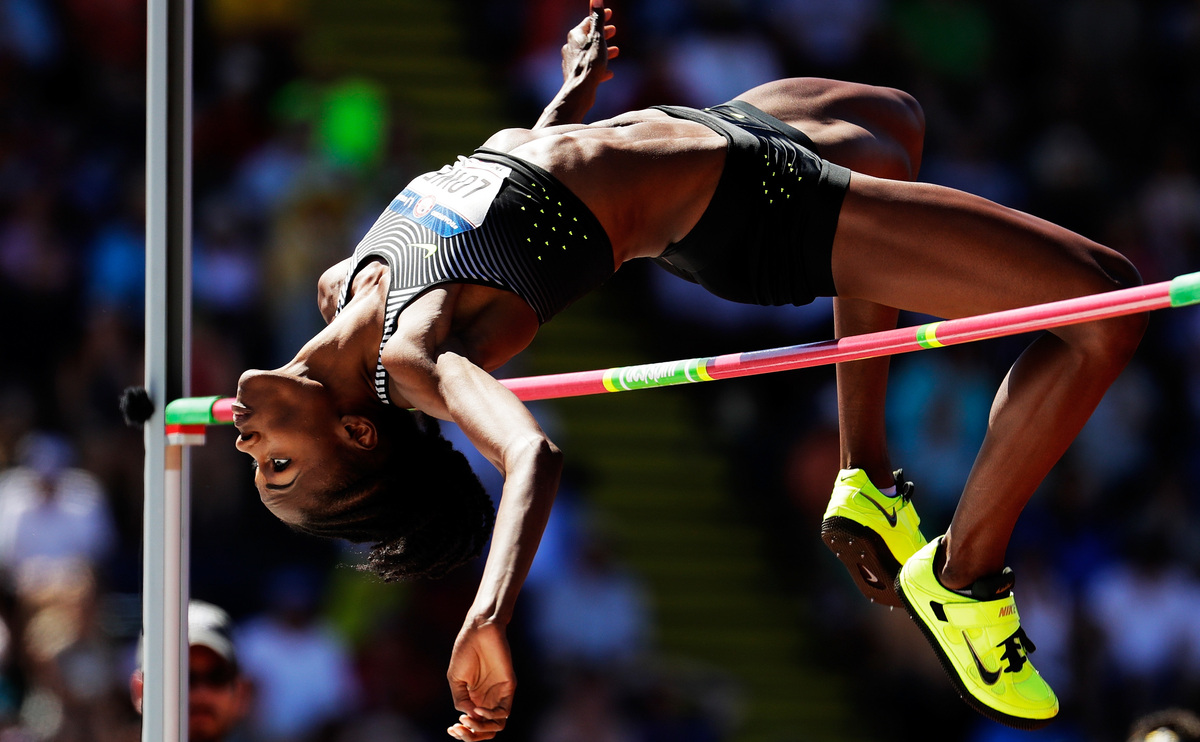 Olympic sports truly were amateur back then and Fosbury knew he couldn't make a living high jumping. So he focused on his engineering degree, and got it. But although his jumping faded into the background, Fosbury had certainly left his mark.

"In 1972, four years after Dick's win, 28 out of 40 jumpers at Munich [site of the '72 Olympics] had already adopted the Fosbury flop," says author Bob Welch. "In 1976, that was the last Olympics when anyone won a medal using anything but the Fosbury flop."

However, when four-time Olympian Chaunte Lowe started high jumping as a high school freshman in the late 1990s, she was scared of the flop.

"Absolutely," she says. "I was afraid I was going to land on my neck, that I was going to break something. I didn't like the fact that I couldn't see where I was going [taking off with her back to the bar] and it took a level of trust between yourself and the high jump mat to be able to jump backwards and know you're not going to get hurt because you'll land on it."

Luckily, Lowe says now, her high school coach convinced her the only real way forward in her sport was to go backwards.

"I feel foolish looking back on it, thinking I could jump higher using a scissor technique. The Fosbury flop, has allowed me to travel the world."

Lowe met Dick Fosbury in 2012. She remembers him as a humble man, who "barely took credit" for what he did for their sport.

Fosbury does, however, take credit for his jump's name. He once saw a picture caption in the Medford newspaper, describing him "flopping" over the bar, like a fish flops on dry land. So when reporters would ask him, "What do you call this thing?" he started answering, "the Fosbury flop."

"It's poetic. It's alliterative. It's a conflict," Fosbury says.

And a nice conflict it is, when a flop is such a success.