Accessibility links
What Migrants Displaced By The Dust Bowl And Climate Events Can Teach Us The World Bank predicts climate change may displace 143 million people by 2050. Environmental shifts have caused migration on smaller scales throughout the history of North America, historians say. 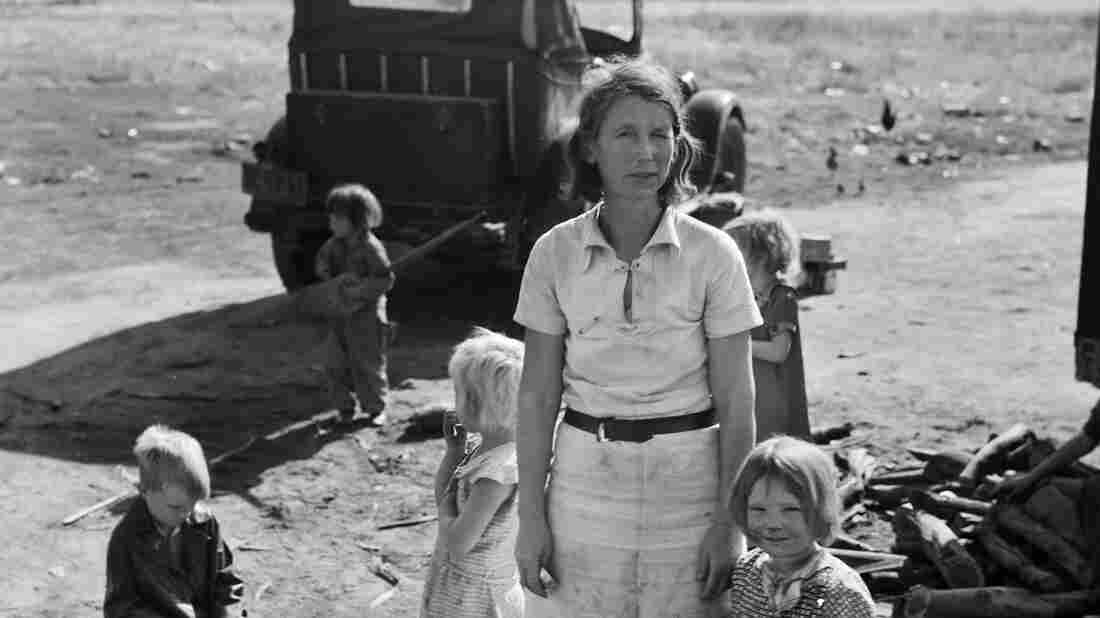 In this November 1936 photo from the U.S. Farm Security Administration, a mother, originally from Oklahoma stands with her five children near Fresno, Calif., where she works as a cotton picker. The Dust Bowl led to a massive migration of Midwestern farmers out of the region, many of whom traveled to California in search of jobs. Dorothea Lange/AP hide caption 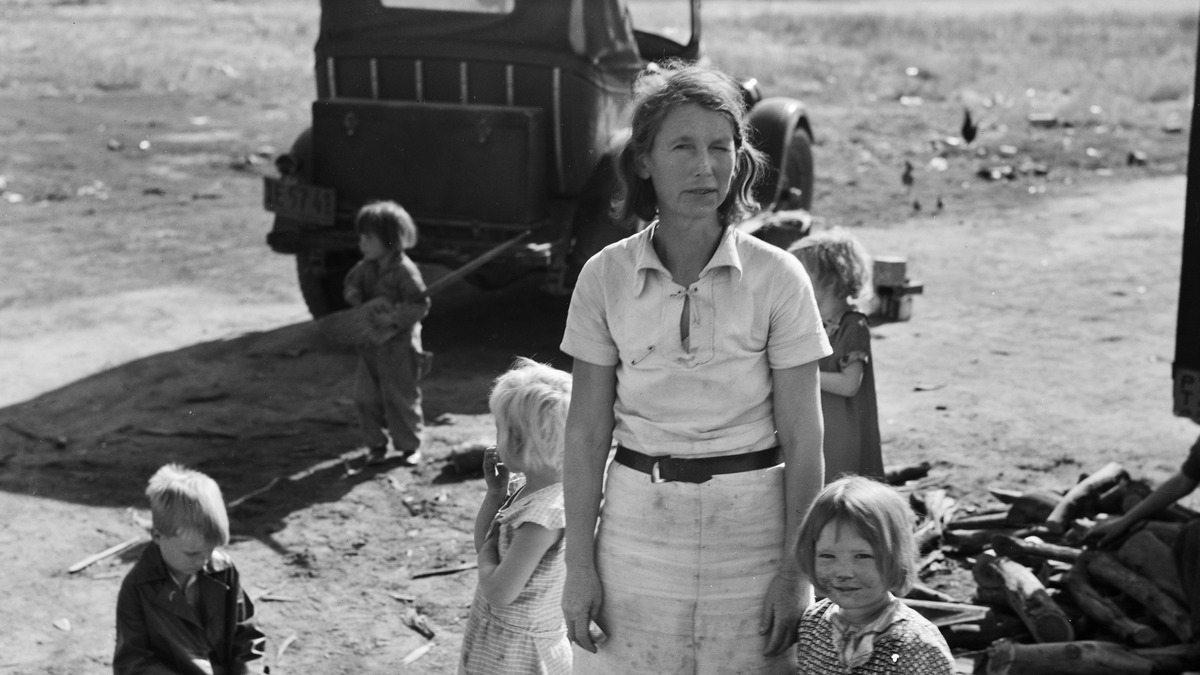 In this November 1936 photo from the U.S. Farm Security Administration, a mother, originally from Oklahoma stands with her five children near Fresno, Calif., where she works as a cotton picker. The Dust Bowl led to a massive migration of Midwestern farmers out of the region, many of whom traveled to California in search of jobs.

The World Bank predicts climate change could create as many as 143 million "climate migrants" by 2050. The result would be a mass migration twice as large as the number of refugees in the world today.

The Refugees The World Barely Pays Attention To

Though the size of potential displacement is unprecedented, the relationship between migration and climate has played out on a smaller scale throughout the history of North America, say historians Nathan Connolly and Ed Ayers.

Connolly, a professor at Johns Hopkins University, points to long-lasting droughts from the 12th and 13th centuries that caused relocations of indigenous communities in the American West. Archaeological records show periods of drought that lasted decades, starting as early as the 11th century.

For Native American populations heavily reliant on crops like maize and consistent rain, those droughts pushed entire populations to leave their homes. Connolly says empty villages in the southwest, now tourist attractions, are a product of those migrations.

"You're talking about thousands of people who are forced to move and relocate, oftentimes abandoning whole cities or civilizations," says Connolly.

Dust Bowl migrants of the 1930s

Centuries later, drought, economic depression and devastating dust storms created the perfect conditions for migration in the 1930s, away from the southern Plains states and towards the west, says Connolly.

Facing millions of dollars of crop losses per day in the Dust Bowl, millions of residents from Oklahoma, Texas, Arkansas and Missouri had no choice but to move or starve. They packed their bags, with many traveling west to California.

The state of California resisted, citing the 1933 Indigent Act to turn back poor migrants along the state's major points of entry. John Steinbeck's novel The Grapes of Wrath, written in 1939, depicted this vilification of climate migrants through its story of a poor family of tenants driven out of the Dust Bowl and mistreated in California.

Ayers, a professor at the University of Richmond who co-hosts the Backstory podcast with Connolly and others, says Steinbeck's novel is a useful glimpse at how climate change migrants may be received in the future, but the book doesn't paint a complete picture.

"One reason we have Grapes of Wrath is that it was about white people moving," he says. "We don't really have representations of people of other ethnic backgrounds who have been displaced and moved."

The idea that certain subgroups may be particularly vulnerable to climate change also has roots in the mid-20th century, when a series of hurricanes hit the Atlantic Coast.

The strongest storm, Hurricane George, hit Fort Lauderdale in 1947, where a group of recently displaced, primarily black residents were the most at risk, says Connolly.

He says that racial segregation statutes implemented after World War II already had forced thousands of African-Americans to relocate throughout the South. In one case, a black community of second-generation railroad workers in Miami was forcibly moved across town in 1947 to make room for an all-white school and firehouse.

The black families watched as their houses were pulled onto a flat-bed truck and set up in a new community. The next month, Hurricane George pummeled the city.

"It turned all of those unfounded homes, homes without foundations, into matchsticks," says Connolly. "Because they were just lying in the dirt. It was the total obliteration of people's livelihoods."

He says the same story played out in other cities, as recently displaced African-American families with few roots in their communities bore the brunt of hurricanes. Connolly says there's a clear parallel to climate migration of recent decades, including Hurricane Katrina's impact on New Orleans.

"So much of the displacement and hardship [from Katrina] is what we should call an unnatural disaster," he says. "When poverty and lack of appropriate infrastructure meets challenges of nature, it creates extraordinary human crises."

The future of climate migration

It's difficult to estimate how many people will become climate migrants in the next few decades, but the conditions for climate displacements have been taking root for decades, according to Ayers.

"Migration — voluntary and involuntary — is sort of creating, so to speak, a perfect storm," he says, "where people are moving to where the greatest vulnerabilities lie."

Jesse Keenan, a professor at Harvard, says Americans increasingly are moving to the Southeast: Economic activity in its Sun Belt states, and the relative affordability of real estate along the coast, has pushed up population numbers in the region.

"We've had a lot of retirees who have built coastal properties," he says. "And they're so new we haven't had cultural memories of why we didn't build there in the first place."

A recent study from the University of Chicago finds that climate-change-induced migration in the next 50 years is expected to increase population in the West by more than 10 percent, with most of the new migrants arriving from the South and Midwest.

As a report from the U.N. forecasts drastic effects of climate change in the next few decades, Connolly says looking back at smaller snapshots of climate displacement may help us begin to envision the migration that could occur, and the places those migrants will leave behind.